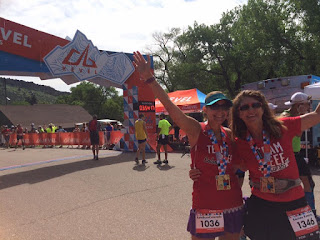 Ever since my terrible, not-so-good, very bad time running Revel Rockies back in 2015, I've wanted to come back and do it again for redemption. I couldn't do it last year due to a scheduling conflict, but thankfully, it actually worked out perfectly to do it this year! Not only was it a Team Beef race, but my friend Rochelle was also doing it as well so I had someone to train with!

We spent the last couple of months before the race getting in some great training runs, including some from the top of the Monument into town and out at Land's End Road. I did some really good uphill and downhill workouts, and some long runs with fast finishes. I felt really ready for this race, and hopefully a shot at a PR. I have not PR'd the marathon distance since February 2015 when I ran a 3:41:35 at the Phoenix Marathon (which was a HUGE, 21 minute PR at the time), and so I was ready to give it a go!

Rochelle was also going for a PR, as well as a BQ, so it was a pretty exciting and big weekend for the both of us! We kicked it off on Thursday night with a little bon voyage / pre-marathon celebration at the Thursday night run club complete with a 26.2 watermelon! Then, on Friday we made our way over to Denver, and Saturday we did a 5K shake-out race at Invesco Field in support of the American Heart Association. The race started at 9am and it was already scorching hot out which got us both pretty worried about how the heat might effect us the next day! After the 5K, we headed to the race expo for packet pick-up then relaxed for the rest of the day at the hotel before attempting to get some sleep before our 3:08am wake-up call. 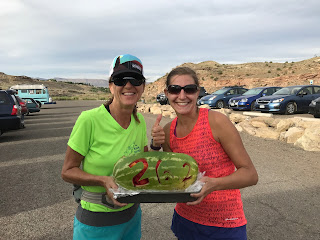 I got to sleep fairly quickly, but then woke up around midnight and off-and-on for the rest of the night leaving me almost glad when the alarm went off shortly after 3. We quickly got ready and headed down to catch the shuttle at 4am. One of the benefits of staying at the Sheraton Race Hotel was that we got our own personal shuttle that took us to the start... what I didn't realize until that morning was that it wasn't your typical shuttle...it was a party bus! Pretty sweet!


After waiting around at the starting line for about an hour, it was time to start! We had to walk about 1/4 mile from the drop off area over to the start line. Right at 6am we were off! I had throw-away gloves on, but aside from that was just in a tank top and it was pretty warm already... this had me a little concerned...it should not be this warm at 6am at 10,000' in elevation!


Despite my concerns about the weather, I just eased into a comfortable, sustainable pace. Since I had ran this back in 2015, I knew the course, and knew that mentally I would focus on breaking the race up into 4 segments: Miles 1-11 are the fastest of the course with a nice downhill grade. Miles 12-16 are the hardest of the course with some big rolling hills. 17-22 are very gentle downhill with some rollers, until finally the last 4 are a fairly significant downhill grade again. 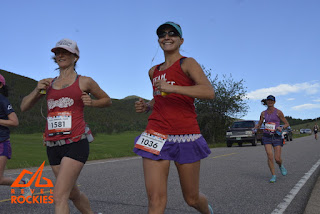 As expected Miles 1-11 were the fastest, averaging in the low to mid 8:00's. I had some Clif Shot Blocks around Mile 6 before accidentally dropping the remaining around Mile 8 (I was so bummed about this!). Nevertheless, I still had my mini tortilla PB&J bites and my mango's - some "real" food I had been experimenting with on my training runs. I had a PB&J bite around 8, and then started on my Mango's around Mile 10 thru 20.

Shortly after Mile 11, the course turns off of Squaw Pass Road and heads onto Evergreen Parkway. This is where it gets pretty hilly so I braced for the hills and told myself not to take them too hard. It was still early in the race and I knew these hills couldn't make my race, but they could brake it...so I took them nice and easy just focusing on one hill at a time. 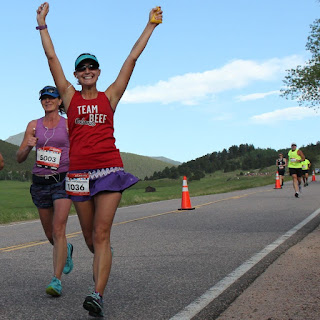 I felt pretty good when I crested what I knew was the last major hill of the of the hilly section (there were still some hills later on, but I knew they were *mostly* done), but I also still kept it comfortable because Miles 18-19 were where I got into trouble when I ran this the last time. It was right around that section where I started getting side stiches and major stomach pain resulting in a lot of walking. I got a little worried as I headed through this section hoping that it wouldn't happen again this time around. Thankfully it didn't, and while I did still slow a bit (due to just getting tired), I still felt okay and kept moving as quickly as I could. 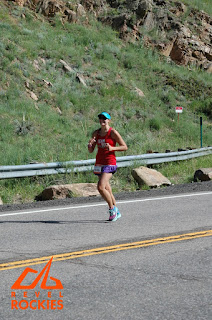 While I had been worried about the heat early on, I ended up pleasantly surprised that it stayed pretty overcast and didn't get too hot for the first 20 miles. However, a little after 20, the sun peeked out of the clouds and it started getting much hotter. It was a little after this that I did have my slowest mile of the day and my only mile over 9 minutes - coming in at 9:19, as I walked through an aid station pouring water over my head. Seeing that mile time kind of prompted me to get moving, and I was able to pick up my pace as much as I could for the remaining miles. 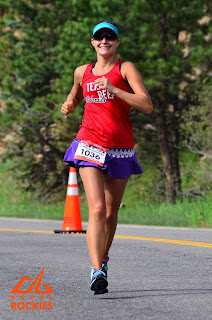 These last 6 miles were very, very hard mentally and physically as my quads were REALLY starting to feel the downhill. Nevertheless I kept at it as best as I could. With less than 2 miles to go I tried to do the math on if I still had a shot at a PR. From what my 24-and-a-half-miles-into-a-marathon brain could figure out, I could *maybe* do it, but I knew it would be very close. So I tried my hardest to pick up the pace. Finally I could see the town of Morrison and hear the finish line! I was almost there! I tried to speed up, but I don't think I actually did, finishing in 3:42:22...and missing a PR by just 40 seconds.

So... I missed my PR by 40 seconds...How was I feeling? Of course in one sense I automatically think back and ask myself, "did I have 40 seconds in there somewhere?" Honestly, probably...at least 30 during the mile I walked and poured water of my head... but aside from that mile I felt really good about the rest of the race. I felt strong the entire time and pushed through some of the harder sections. So while, yes, of course I'm slightly bummed to have missed it by such a small margin...but at the same time, I'm very happy I ran as fast as I did. I have not ran a sub-3:50 marathon in close to 2 years. I had not ran anywhere NEAR a PR time in over 2 years. I had also beat my 2015 race on the same course by about 17 1/2 minutes. So in that sense, I am very happy with this race!

After I crossed the finish line, I took a few minutes to catch my breath then looked for my family. They had signed up to get tracking for both myself and Rochelle and I wanted an update on Rochelle. According to them she had passed the "1-mile-to-go" marker a few minutes prior, which meant she would be finishing any minute now! This also meant that she was going to blow her BQ out of the water. She need sub-4:00 (but really a 3:55 to actually have enough of a cushion to get into Boston)...and she finished in 3:51:17!!! A huge PR, a BQ, and 3rd in her age group! Amazing - and so much fun to get to celebrate with her! 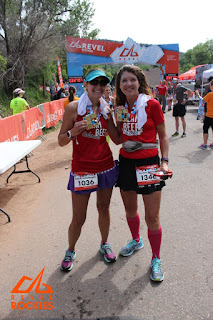 After the race, we relaxed for a bit at the finish line with our friend Liz (who lives locally and came to watch us finish! So cool) and my family for a few before they left.

The other cool thing about this weekend was that an online friend of mine from Texas (one of the people I met up with to run the Houston Marathon back in January) was racing Ironman Boulder this very same day! If you don't know the details of an ironman, it's a 2.4 mile swim, 112 mile bike ride and 26.2 (marathon) run. Easy peasy right?! Ha! Because of the crazy length of the event, my friend wouldn't be starting the marathon portion until around 2:00 or so that afternoon...so I had to go watch! I've also always thought it would be fun to watch an Ironman, so this was the perfect opportunity! It was very inspiring to watch, and I'm so glad I got to see her finish. She also PR'd - which was especially amazing given that she came from sea level to race in Boulder (5400'). Clearly this was a weekend for kicking all the a$$! 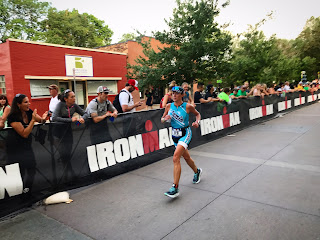