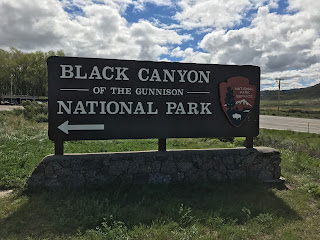 This year marked #5 of The Black Canyon Ascent - a 6 mile run from outside of Black Canyon National Park up to the entrance of the park. It's a challenging 1800' of gain over the course of 6 miles, and yet for some reason I keep heading back every year... (and on my birthday weekend no less!).

My times have been all over the place with my fastest being in 2015. I attribute my significantly fast time that year to the fact that I had been doing a lot of speedwork combined with the fact that it was pretty cold out, and even sleeting at one point in the race. I had a feeling I wouldn't be able to match that time again, but since I had actually put in some decent hill training, I was hoping for my second fastest time. I was even more hopeful when I saw that it was forecasted to be another chilly year (it is not typically cold!). Spoiler alert: I did get my second fastest time!

As briefly mentioned above I actually trained the most I probably ever have for this race, mostly by running Little Park Road southwest of town. This road heads up to Glade Park with similar elevation gain as Black Canyon Ascent (I will say that Black Canyon is a more steady gain, while Little Park Road has more variances in its gradient). This actually worked really well though, as I'm also in the midst of training for a downhill marathon as well. This allowed me to get in some good uphill and downhill training in one run (as well as giving me the "downhill" as a motivation to do the uphill since downhill running is So. Much. Fun!).

We had a nice group from Grand Junction going this year, which meant I had people to carpool with! We left around 5:30am and made the hour and fifteen minute drive down to Montrose, getting in just before 7:00am. There is a walking category that starts at 7:30 with the race starting at 8, so this gave us plenty of time to pick up our packets and warm up a little before the start.

We started right around 8:00am and began our ascent to the top (there is only "one" hill afterall!). The race starts gradual for the first 1/2 mile or so before steadily gaining more elevation. My goal for this year was to average around 11:00 miles, therefore, I was pretty happy to see Mile 1 come in at 10:45.

Mile 2 flattens out for about 1/2 mile so I was able to pick it up a little, coming in at 10:37, before the next 3 hardest miles of the race: 3-5. These one's are the toughest because you really don't get any breaks. As such, they were my slowest of the race in 11:21, 11:12, 11:39. Thankfully I know the course extremely well by now, and therefore know that Mile 6 is the easiest of them all. Yes, it's still "up", but you also get a couple of downhills. And you get the mental bonus of knowing you're almost done, so I'm usually always able to pick things up. I looked at my watch and was pretty happy to see I could most likely get under 1:05, so I picked things up as much as I could trying to pass people in front of me if I could (I only managed to pass 1 person) and finishing Mile 6 in 9:05, for a total time of 1:04:51... or so I thought.

My official time has me at 1:06:09, which I'm still extremely confused about. Other Grand Junction runner Ernie finished right ahead of me and also attests to the fact that he saw the clock in the 1:04's when we crossed, so I'm sticking to my Garmin Time even if it's not "official".

After the race I watched friends come in before heading down to the amphitheater to enjoy the amazing breakfast burritos they have every year and waiting for the awards and raffle. I was secretly hoping for an Age Group award because A. I've gotten an award at the other two Black Canyon Races, but never this one, B. I've come in 2nd in my age group 3 times before, and C. I'll be entering the 30's age group next year where I will have no shot at an award for at least a decade (the 30's age group is always EXTREMELY competitive!)... but alas I was second AGAIN (after the overall runners are removed from the category, as they typically are). Oh well.. I will just have to keep doing this race well into the future!

Overall I had a lot of fun this year! I'm glad we had a nice group of Grand Junction runners there including my friend Cheryl who actually motivated me to train and ran and awesome time of 59:26, along with Rochelle who won her age group, Marty, Laura, Karla, Kim, Randee, and Ernie who got this great picture in the Montrose newspaper with me in the background (my only race picture, so I'm posting it!):