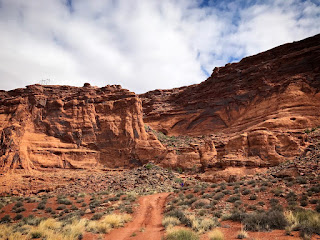 At the end of April, I ran a new (for me) trail race: the Amasa Run in Moab, Utah! While I do race in Moab a lot, I tend to do the same races every year, so I was excited to get to see a new trail! The Amasa Run is put on by Grassroots Events - the same company that puts on the Red Hot 33K & 55K in February. It gets it's name from the main trail you run on - the "Amasa Back" Trail. I had heard great things about this race for several years now, so I was excited to finally make it out here this year!

My friend Rochelle and I decided to drive up the morning of the race, and I think we were glad we chose this as opposed to camping, as it was a COLD weekend (unexpected for Moab this time of year). The forecast was overcast with a slight chance of rain and highs in 50's. What I wasn't prepared for was the never ending WIND I got to endure for a majority of the race! But I'm getting a little ahead of myself I suppose...

We made it to the race start around 7:20 or so, with just enough time to get ready and find some other local runners before the 8:00am start time. There are three different race distances to choose from at this event: a 15.5 mile, 9.5 mile, and 6.5 mile. I am always naturally drawn to the longer distances, so I choose the 15, but was kind of bummed when I realized that EVERYONE I knew was only doing the 9! Nevertheless, I knew I wouldn't regret it once I was done, so I sucked it up and got ready to start!


The race starts off on a dirt road for just over a mile before you turn right to get onto the Amasa Back Trail. As soon as you hop onto that trail, it's a steep downhill to a small creek crossing, and then a long, gradual uphill section until the aid station shortly after Mile 4. During this uphill section, I could really tell that my uphill training I've been doing to prepare for Black Canyon Ascent has been working, as I was able to run most of this (usually in trail runs, when an uphill section hits, I just walk most of it!). As we crested the first major climb, there was the most beautiful view overlooking a valley hundreds of feet below. I stopped for a quick picture thinking about how gorgeous this was, until coming to the stark realization that the 15.5 mile course goes DOWN into that valley and then has to come back UP it later...oh joy!


Once I made it to the aid station, I had a tiny bit of coke, grabbed some candy for later (I love trail race aid station food!), and made the left turn that separates the 15.5 milers from the rest of the racers. We had a short flat(ish) section before getting onto the crazy steep "Jackson's Ladder" that would take us down to the valley floor for a 4-5 mile loop. The course description had described this as a "600 ft. descent off of the Amasa Plateau"...what I failed to see in the description was that this 600 foot descent was in 1/4 mile... You read that right... you descend 600 feet in ONE QUARTER OF A MILE. It's no joke. Jackson's ladder was a series of very rocky and very technical switchbacks along the side of the Amasa Plateau, which meant I was pretty sure that I was "running" (hiking) down this slower than I would come back up it 5 miles later. 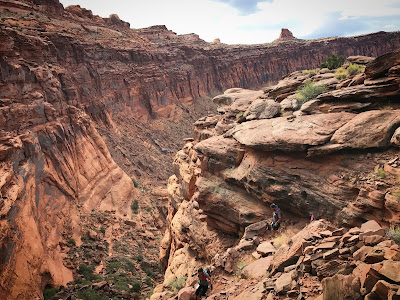 What I also knew from reading the course description was that we were going to have to go back up this once we made our 4ish mile loop around Jackson's Butte on the valley floor. As I was descending this insanely steep trail, I tried my best not to think about that...

The good news was that after you make it to the bottom, the next 4 miles were nice and very runnable, albeit a bit sandy in some sections. I got very confused when I saw a couple of runners headed towards me about a mile into this, but soon realized they must have ran the loop in the wrong direction on accident. I kept going, running some of my faster miles for the day, including a few in the 9:00's before it was finally time to re-ascend the insanity of Jackson's ladder! 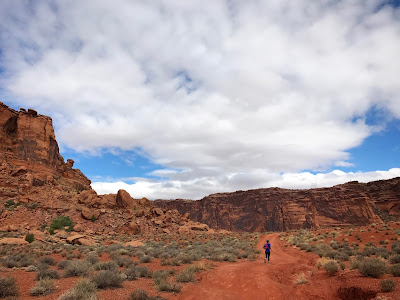 Ascending back up Jackson's Ladder actually wasn't *that* bad. I just kept it slow and steady, one step at a time, until finally making it back to the top of the Amasa Plateau. We went back by the aid station where I stopped a little bit longer to try and recover my legs for a minute before I headed off for the last 5 miles of the race.

I had really hoped that once I made it back to the top, I could really pick up my pace and run some faster miles to the finish. Unfortunately I was not prepared for what that major ascent would do to my legs. They just felt completely DEAD for the remainder of the race. Add to the fact that I did not realize I still had several miles of gradual uphill to go until we would finally reach the high point of the course and get to start descending to the finish... The flag markers had also gotten a little scarce and I was by myself, so I found myself going pretty slow to make sure I wasn't getting off course... needless to say these next few miles were much slower than I had hoped. 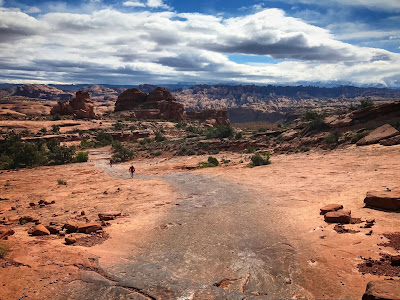 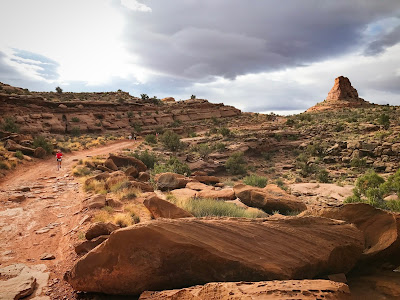 Two guys caught up to me around Mile 12, which was around where the trail curves around to the most gorgeous views of the Colorado River. I stopped for a few pictures, while they passed. From then on, I ran back-and-forth with them, which was actually pretty helpful to have some people around for motivation to keep moving at a decent pace. We kept asking each other WHEN the downhill would start, until finally around mile 13 it did! It was a long decent high above the river with some pretty cool, albeit fairly exposed sections. I ran it in as fast as I could given my dead legs and some of the technical sections that were a little intimidating to me with the exposure, until finally making it to the water crossing which was just a few hundred yards from the finish. I really WISH I had gotten a picture, because the water crossing was pretty epic... mid-thigh deep! Had it not been so close to the finish, I definitely would have stopped, but I was just ready to be done by this point! 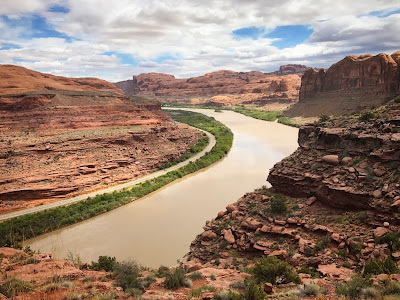 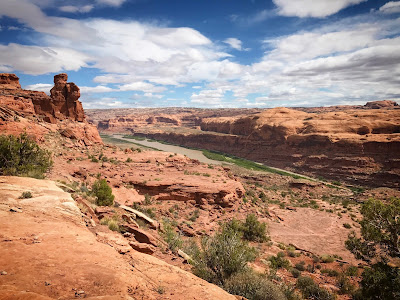 I quickly waded through the creek crossing to the other side, hopped out, and made my way to the finish which was slightly closer than I was expecting (my garmin was just barely past 15 miles) where I finished in 3:15:12. I had originally hoped to be closer to 3 hours, but also had no idea how technical or tough this course was, so overall I was pretty happy. I do think I could've picked up the pace a bit in those later miles, but I definitely couldn't have gained 15 minutes anywhere (except maybe Jackson's ladder if I was a crazy person who could run down that! Speaking of which - I would LOVE to watch the front runners descend this - I think it would be amazing to watch!).

All of my friends who had done the 9 miler were still there, so we got a group picture before they took off since they had all been done for at least an hour by this point! Two local runners who had camped invited me over to their campsite for a beer, so I did go and join them for a bit since I wasn't quite ready to drive the 1.5 hours back that quickly after getting done racing! 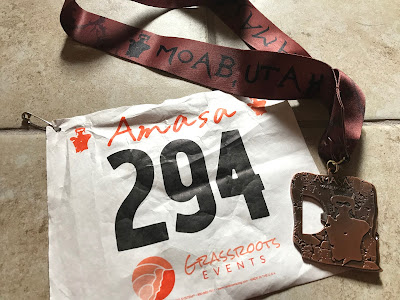 Overall, I loved this race course. It was really pretty, and I even liked going down Jackson's Ladder, despite how much it beat up my legs! The race was well organized, and the one aid station worked well since the 15.5 Milers went by it twice. I also liked that you got a finisher's medal which was a little bit of a surprise since you don't get one at Red Hot (which is a longer race). The only thing I didn't like, was that WAY more people do the shorter distances (the 6.5 miler had 82 finishers, the 9.5 had 61 finishers and the 15.5 miler had 43), so by the time I got done, there was hardly anyone else at the finish line area...and I usually like to sit around and hang out for a bit when I get done at a race. Aside from that though, loved the course and I would do this one again (I just need to find more people to do the longer distance with me!).