I've been wanting to hike to the top of Hallett Peak ever since I found out it was the gorgeous mountain towering above Dream and Emerald Lakes in Rocky Mountain National Park. I first hiked to Dream Lake in 2015, when we spent the weekend in Estes Park after I ran the Loveland Marathon. It's a really nice 3 mile round trip hike, but definitely one of the more crowded hikes in the park. Then again, this past January, I did a winter hike to Dream Lake again, this time also getting up to Emerald Lake (Emerald is just a little past Dream Lake) which was even more stunning and super fun hiking in the snow.

So, when I got a permit to go into Rocky Mountain National Park on Saturday, July 11th, I decided it would be a great time to try to hike to Hallett Peak. However, as I was researching, it appeared there isn't an actual trail to Hallett Peak - there's a trail to Flattop Mountain, which is next to it. From what I read, it sounded like a lot of people did still go up to Hallett Peak, but it just wasn't a designated trail and wasn't shown on the Rocky Mountain National Park maps. I like hiking, but I'm not much for route finding, so I figured we would hike to Flattop and then decide if it looked like Hallett was doable or not.


The hike up Flattop Mountain starts from the Bear Lake Trailhead - the busiest trailhead in the park. I had a permit to enter RMNP between 6am-8am. After thinking it through though, we decided it would probably be best to actually get to the park before 6am so we wouldn't have to worry about getting a parking spot. This turned out to be our best decision of the day because when we entered the park at 5:30, there were already lots of cars in front of us, and when we got to the Bear Lake Trailhead around 5:45, there were probably about 10 spots left out of the hundred or so there. This had me a little worried about crowds on the trail, but thankfully there are tons of different trails that jut off from Bear Lake Trailhead, so at least everyone wouldn't be on the same trail.

We started on the trail right around 6:00am and made our way from Bear Lake north to the Flattop Mountain Trail. There's a couple other trails that split off from here, but not any of the really popular ones, so thankfully we didn't have to navigate through too many crowds. The distance from Bear Lake to Flattop Mountain was 4.4 miles one-way with about 3000 feet of gain which honestly made for a really nice hike. It was a nice uphill workout without being too challenging and before we even knew it, we were above treeline. 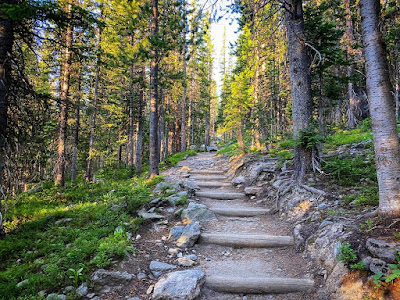 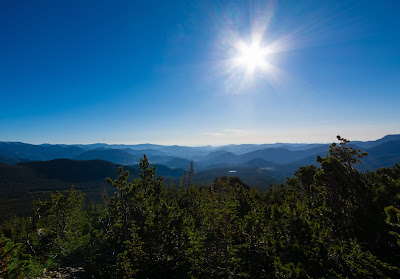 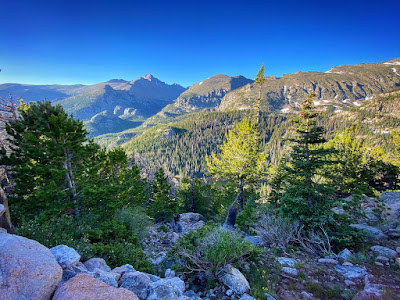 Shortly after making it to treeline, we did have some heavy traffic as about 5 different groups seemed to all catch up at the same time. So that instance required a lot of getting off the trail to let people pass, but after that, the traffic really wasn't bad for the rest of the day. As we got above treeline, I started stopping for lots of pictures (if I haven't said it before, being above treeline is my absolute favorite thing about hiking in the summer), so we slowed down a bit as we kept making our way up. 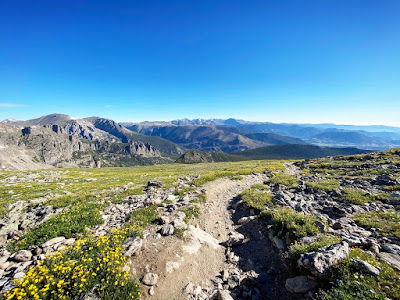 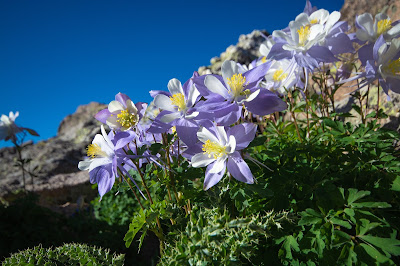 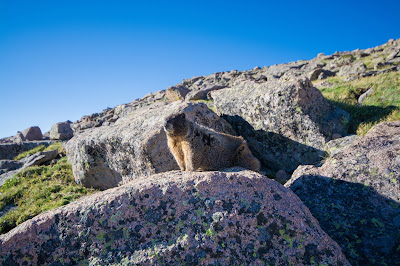 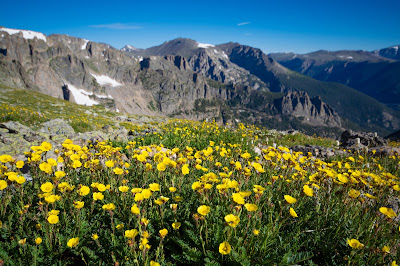 Along the way, there were several overlooks to see Dream and Emerald Lake from above. We also saw lots of Marmots and Wildflowers, and then we had one snowfield to cross before finally making to the top of Flattop Mountain. As it's named, it was pretty flat at the top, so we found a nice rock to have a snack break and decide what we wanted to do about Hallett Peak. From what I could gather, it would be about 3/4 of a mile one-way and about 400' of gain to make it to the top. It didn't sound too bad, but it looked a lot higher than that. But after our break, we decided we might as well give it a shot since we had already made it this far. 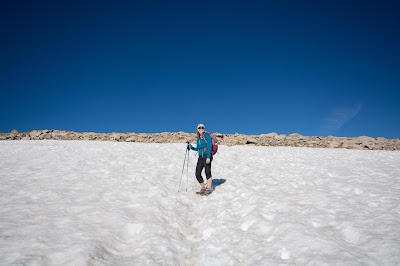 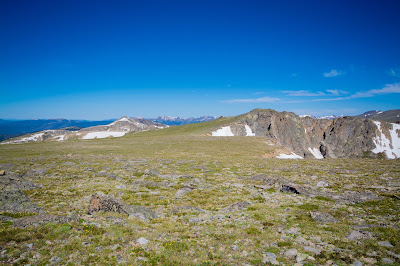 I'm so glad we did, because it really wasn't that bad at all. The longest part was getting from the junction of Flattop Mountain to the start of the ascent. It was pretty rocky, so it just took awhile, but once the ascent started it went quicker than I thought and in no time we were at the summit! We also found a perfect spot to sit down that was blocked from the wind which actually made it warmer at the top of Hallett than it had been when we were on Flattop Mountain. The views from the summit were awesome - including some incredible views of Long's Peak.

After enjoying the views for awhile, we made the journey back! It ended up being a SUPER hot day on the way back down, but overall this was a really nice hike. It was hard, but not overall hard by any means. Our total distance with Hallett Peak ended up to be about 11 miles round trip, with about 3100' of elevation gain. I definitely recommend this one and would do it again sometime.