The Boulder Skyline Traverse makes for a great trail run traversing the five major peaks above Boulder in one go: South Boulder Peak, Bear Peak, Green Mountain, Flagstaff Mountain, and Mount Sanitas. Coming in at just under 18 miles with almost 6000' of elevation gain (my garmin clocked 5,947') - much on technical, rocky, steep trails, it is no easy feat, however, and will probably take you significantly longer than anticipated. Nevertheless, it's an excellent run and provides for a great way to see all that Boulder has to offer in terms of mountain running!

If you only know me from social media, you  may not know I actually grew up in a small (at the time) town right outside of Boulder. However, I didn't find a joy for running until after I moved away, so whenever I come back to visit, I try to explore a little bit more of these awesome trails that people come all over the world for! When I first heard about "The Traverse", I just knew I had to do it sometime! 5 peaks with tons of elevation gain over 18 miles was right up my alley... now it was just a matter of finding a time I could do it... I knew I would be visiting the area the weekend of June 1st-3rd for the Skirt Sports Ambassador Retreat, so I decided to try and fit it in. This weekend is always crazy busy, but I figured if I drove over Thursday night, Friday morning could be a perfect opportunity (plus going Friday would mean WAY less crowds than trying to do it on a weekend - if there's one thing I don't miss about moving to the Western Slope, it's how crowded the trails are on the Front Range!).

As mentioned, I made my drive over the mountains on Thursday night, went straight to bed, and was up just before 5:00am the next day. I was meeting my friend Dawn in Boulder a little before 6am, to drop her car at the finish area (Mt. Sanitas), and then we drove my car over to the South Mesa Trailhead where we would begin our day.


Around 6:15 we set off for what would be about an 8 hour day. The route starts out on Mesa Trail, which is a smooth, non-technical trail, but with some nice elevation gain right from the get-go. We ran/walked the first couple miles on Mesa Trail before getting onto Shadow Canyon Trail and beginning what would be the biggest climb of the day - up to Peak #1 - South Boulder Peak. It also changed from a nice smooth trail, to a very technical, rocky climb, part of which involved climbing up over large boulders. I have actually done this route a couple years back though, so I was mentally prepared to know it would be slow going - and it was - as we gained close to 3000' of elevation from Miles 1-4 - and 2000' of it over 3 & 4 alone. After continuing up, up, and more up, we finally reached the saddle between South Boulder and Bear Peak.

From the saddle, we turned left to head towards South Boulder Peak first. The trail started out nice and defined for a quarter mile or so before turning into just a big pile of boulders leading up to the summit. We climbed over the large rocks and made it to the top - reaching Peak #1 of 5 for the day - right at the 4 mile mark!

After snapping a picture, we turned around and headed back down towards the saddle, and then where we went left before, we now went right to head up to Bear Peak. We had dropped down a couple hundred feet, so we now had to go back up another few hundred, but compared to the 3000' from before it wasn't too bad, and we reached Bear Peak around Mile 4.8. This peak has a bunch of large boulders to climb over to reach the summit, so we slowly made our way up for our Peak #2 pictures before climbing back down and then starting our first major descent down Bear Canyon. 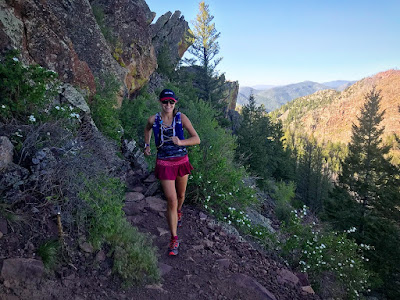 The first half mile or so down Bear Canyon was steep and technical, but after that it opened up to more runnable trails and we were finally able to make up some time for a few miles as we continued down the northwest side of Bear Peak, dropping about 1200' before crossing Bear Creek and turning left to start heading up to Green Mountain. We were now around 6.75 miles total and had about 2 miles with 1000' of gain to the summit of Green Mountain. Once again, after the earlier morning climb, 1000' over 2 miles didn't seem to bad as we started heading up. And it wasn't for the first 1 and 1/2 miles. The last 1/2 mile to the top however, it once again got rocky and steep, and we were back to going nice and slow! As we got later in the day, we were also starting to see a lot more people (I had been very surprised to only see 2 other people up to Bear Peak). After a slow going last half mile, we made it to the summit of Green Mountain - about 8.75 miles into our traverse!

After our Peak #3 picture, we headed back out and started to make our way to Flagstaff Mountain. This section was pretty runable, and I really enjoyed the next mile and a half or so as we descended down pretty green single track making our way towards Flagstaff Mountain! After a couple miles of down, we crossed a road over to the Flagstaff Parking area. After getting slightly mixed up as to which trail we wanted to be on, we ascended a couple hundred feet before making it to what we think was the summit. The information I had read from "Trail Run Project" just said that, "To tag the true summit of Flagstaff, head off trail to the left of the highest point you can find"... so not very descriptive. This peak was also covered in trees, so it was kind of hard to tell whether or not we were actually at the summit...but we felt it was close enough to call it good and take our Peak 4 Selfies!


You'd think with 4 peaks down and only 1 to go, it would be easy-peasy from here on out, right? Well, it wasn't. This was the longest stretch by far between peaks and it felt like it took forever to make it from Flagstaff (mile 11) just to base/start of Mt. Sanitas (mile 15). We had to go down Flagstaff Mountain all the way back into the town of Boulder, and this "going down" section, while on trail, required you to cross Flagstaff Road multiple times. It also got confusing in a couple of spots, but thankfully the Trail Run Project app shows your location and makes it easy to get back on course if you get lost. Around mile 14, we finally reached "Eben G Fine Park" - the only place to fill up water (unless you want to filter some in Bear Canyon around Mile 6.75). We stopped here for a bit to fill up water before getting on a short section of a paved bike trail which took us underneath Canyon Blvd in Boulder and then through the Settler's Park area of trails (which required a short and steep ascent), before heading back down to cross Mapleton Ave / Sunshine Canyon Drive where we finally got onto the trail up to Mt. Sanitas! 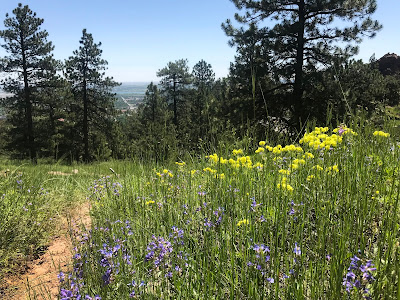 Finally...our last ascent of the day. That all being said, the hike up Mt. Sanitas is no joke. 1300' of elevation gain in 1.5 miles in the heat of the day... yeah it wasn't fun. Nevertheless, we kept at it - one foot in front of the other as we inched our way up the rocky trail. After what felt like the longest mile and a half ever, we finally reached Summit #5 of the day - Mt. Sanitas at 6,863' - right at 16.3 miles in (by the way, the Trail Run Project app listed the traverse as 16.3 miles...which when I did my initial research I did not realize meant 16.3 to the last summit...not including the mileage needed to get back down - so expect closer to 18 miles!). After taking our Peak 5 summit picture along with our usual peak photos, it was time for our final descent back to the car! I got down right around 17.7 miles, so of course I added an extra quarter mile to make it an even 18 before calling it a day! 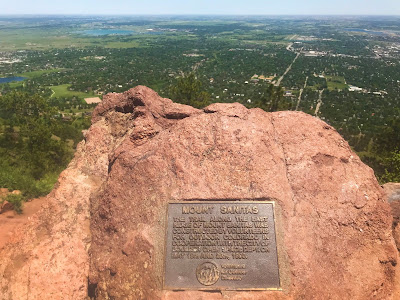 So, would I do this again?

Yes! Overall this was definitely one of my favorite long runs I've done along the Front Range foothills. There were a few minor challenges - it can get very hot depending on when you do it (I would not recommend this for mid-summer!), and the route can be a little tricky to follow, especially in the section between Flagstaff Mountain and Mount Sanitas. The views, however, are awesome, and running it in May or early June is a phenomenal time because it is so green! I highly recommend this if you're wanting a challenging long run (with a lot of hiking thrown in) in the Boulder area! 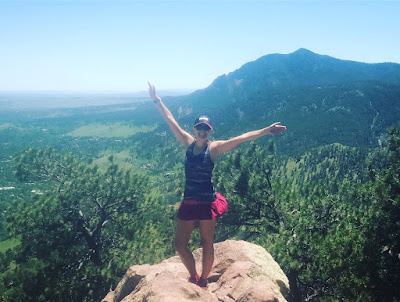