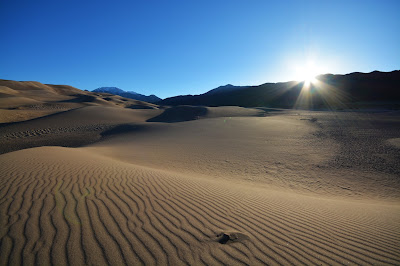 This past memorial day Scott, myself, and the pups took an anniversary road trip to Great Sand Dunes National Park. We've been before, but it had been several years, and I had never been in the spring when the Medano Creek flows through the park. When I booked the trip though, I didn't realize this was apparently the most crowded weekend of the entire year for this park (my bad!). Nevertheless, we were looking forward to a beautiful weekend in the mountains.

What began as simply a trip to the Sand Dunes, ended up turning into more of a "road trip" / explore Southwest Colorado (and a little bit of New Mexico!) trip, as we definitely took some longer, but significantly more scenic routes along the way. We actually ended up traveling almost 1000 miles over the course of the weekend checking off some places I have never been. 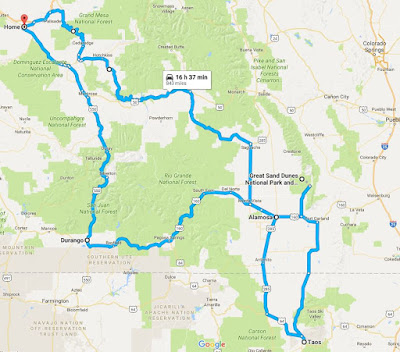 Last summer I took my Colorado Map out of my car and started highlighting all of the major roads in the state that I have driven, with a goal of eventually driving all of them (or at least all of the ones through the Mountains - not sure about all the Eastern Plains yet!). I definitely got to highlight several more after this trip! 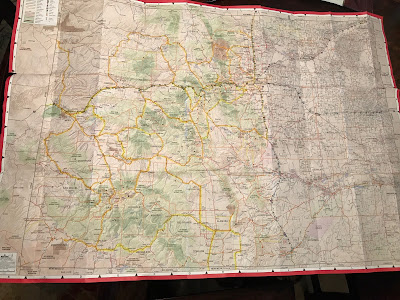 So without further ado, I think I will recap the trip based on the timeline and route:

Day 1: Grand Junction to Alamosa by way of Highway 65 over the Grand Mesa, Highway 92 along the northern side of the Gunnison Gorge, and then finishing up with the traditional route to Alamosa through Saguache and Monte Vista (Highways 114 and 285).

The Grand Mesa detour was "on-the-way" without being "on-the-way" at all... By that I mean, if you look at the map it looks like it's on the way, but it probably adds a solid hour and half more than if you were to take the standard route from Highway 50 south (after all you are making a detour that goes from 4500' elevation up to 10,800' and back down to 5000'). Honestly though, the reason for going this way was that I just wanted to do a downhill run from the top of the Grand Mesa into the town of Cedaredge. This had been on my list of training runs I wanted to do before my upcoming marathon...but logistics made it impossible until today. MANY thanks to my hubby for dropping me off at the top, and then waiting for me to run 17 miles down the Mesa (at least it was a fast one for me, averaging an 8:15 pace for the run). It was also gorgeous, and the spring weather made it just about perfect! 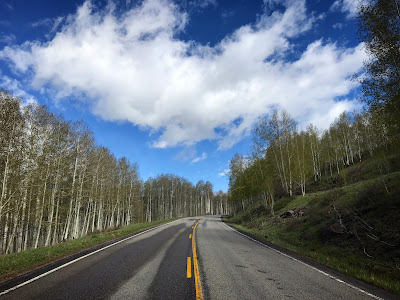 Before I started, we did let the dogs out to run around at the Crag Crest Trailhead. It was just a little snowy up there still: 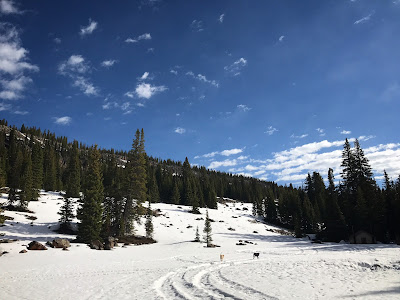 After Scott picked me up, we continued the drive south, while making our second detour of the day: taking Highway 92 instead of the traditional Highway 50 route. Highway 92 runs along the north side of the Black Canyon and the Gunnison Gorge and was seriously beautiful. I will warn you though that it is pretty remote. There wasn't much of any civilization once you pass through Crawford until you get to Gunnison. It was definitely worth the extra time driving this road though! 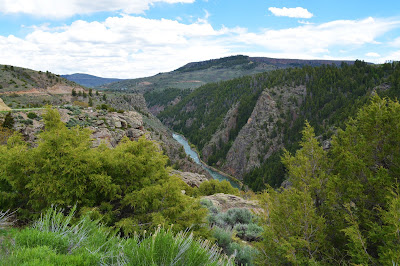 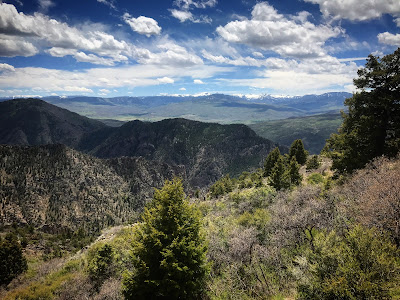 Day 2: Alamosa to the Sand Dunes, with an afternoon trip to Taos, New Mexico looping highways 159 and 285 through a lot of very small towns!

Saturday was our full day at the Dunes, and I had originally intended to spend the entire day at the Dunes. I brought towels and lawn chairs and lunch. Since my plan had been for the entire day, we did sleep in a little, arriving at the park around 10:00am, and as expected, it was CROWDED. We waited about 30 minutes to get into the park, but then, by some miracle, ended up with a parking spot right up front (it seriously was a miracle!). We decided to first hike up to High Dune. We hiked this last time we were here, and while it's short, it's kind of tough since you're, you know, hiking in SAND. Nevertheless, the view from the top is beautiful so I wanted to do it again. Unfortauntely we made it about 2/3 of the way there before realizing the sand was getting too hot for the dogs feet, so we headed back, as we figured it was only going to get worse. 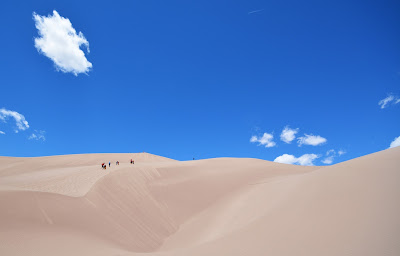 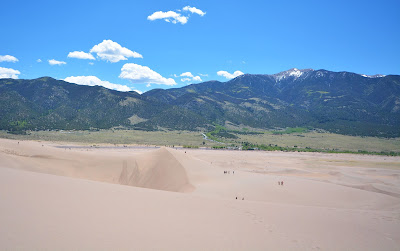 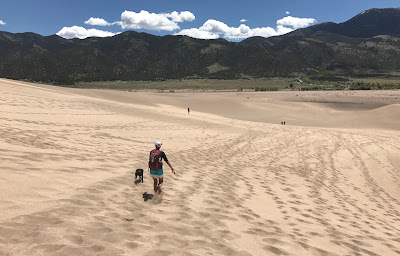 After that we hung out by the water for a bit, until it, unfortunately got very windy and overcast. The Medano Creek, while really cool, was also FREEZING, and if it's not warm out, it felt extra freezing. The wind also made the sand kind of rough to be in, so we decided to pack it up. What we were going to do for the rest of our day, we hadn't yet decided...but being outside in the cold, windy sand wasn't working that well. After contemplating for a bit, we decided...why not drive to New Mexico? What else are we going to do? We didn't come all the way to Alamosa to sit in the hotel afterall! So it was settled. We realized there was a nice loop we could do that would take us down to Taos, New Mexico, and back up into Colorado. Along the way, we also drove over the Rio Grande Gorge Bridge which was pretty cool. 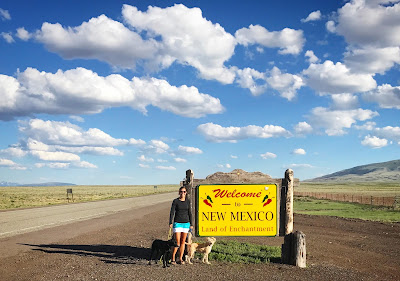 Day 3: Sunrise at the Sand Dunes, then Alamosa back to Grand Junction by way of Highway 160 through South Fork, Pagosa Springs and into Durango. Then North on 550 through Silverton, Ouray, and Montrose.

I wanted to get back to the Sand Dunes one more time before we headed back, so I decided to make a sunrise trip out of it. I figured this would be gorgeous and a nice way to enjoy the Dunes without the crazy crowds that are there during the day. Overall, I'm glad I did it (the dunes are so pretty in solitude!), but it was seriously COLD (especially crossing Medano Creek), and I probably wouldn't do it again. 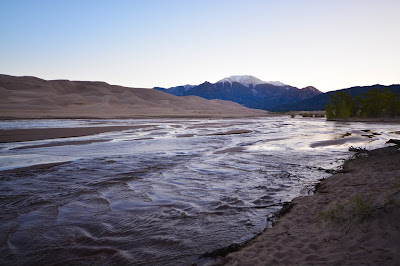 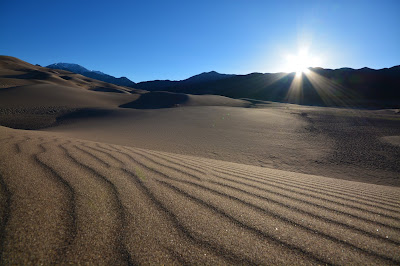 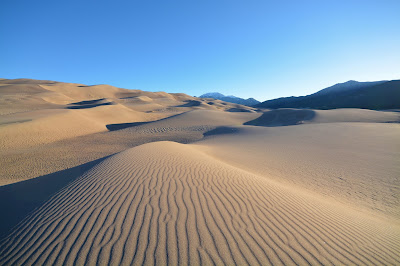 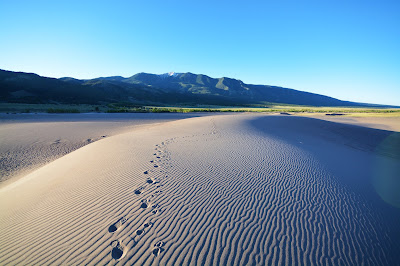 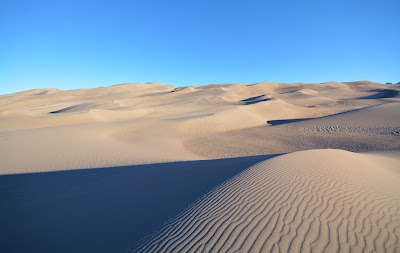 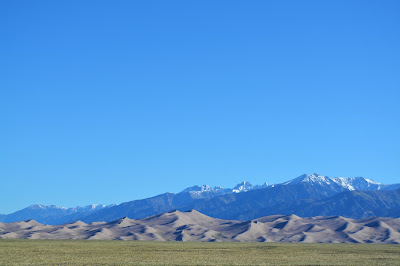 After the sunrise trip, we headed back home, but this time taking an even longer route which went through South Fork, Pagosa Springs, Durango, Silverton and Ouray. I had never been over Wolf Creek Pass and into Pagosa Springs, and after just briefly driving through, I know I want to head back sometime to check it out even more! 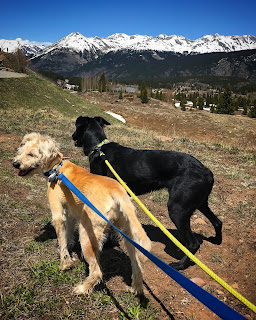