Where to even begin in regards to recapping this crazy, awesome, ridiculous weekend, with a terrible, not-so-good, very bad race thrown in?

I suppose a good place to start with be with a little background regarding this group of internet strangers I actually spent the weekend with (yes, you heard that right... I flew half way across the country to stay with people I met on the internet!). A few years ago it would've seemed crazy. Now, not so much. You see, it all started on a little website you may have heard of: MyFitnessPal. Back when I first started getting into running, I didn't know anyone else who ran... so I turned to a running forum on MyFitnessPal for general running advice. Fast forward a year or so later and I had gotten acquainted with quite a few of the regulars in the group. Fast forward another year and we had formed a Facebook group to more easily connect, and thus pretty much knew everyone's complete life stories! So, needless to say, by this point in time, 3+ years later, it didn't sound so weird. I also took solace in the fact that I had met 5 of the group members at various races, who had also met others in the group at races, so I had a pretty good feeling there weren't any axe murderers residing among our little community!

Since a few of them live in the Houston area, in 2016, they had the first official Houston Marathon meetup. I wasn't able to attend, and immediately after seeing all of the posts about it, had serious FOMO.... so I knew I had to make it in 2017! Therefore, when registration opened in May, I signed up for the Marathon and the rest was history!

Now, onto race weekend (and then, eventually, I MIGHT get to recapping the actual race? maybe...).

On Friday I headed out and made my way to Texas, going straight from the airport to one of the group members houses for the first night of shenanigans. As one of the last people to arrive, walking into the festivities was one of the craziest, most surreal moments - here were ALL these people I've known online for years, in real life. It was like I knew them all, but didn't. It was weird, but awesome! Everyone was just as I had imagined from the internet! As overwhelming, and sometimes frustrating, our world of technology can feel, it is also a seriously awesome way to communicate and meet people! Here I was walking into a room with 30 "friends" who I was just meeting in person for the first time!

Friday night was spent meeting everyone and catching up. The next morning, we all met up again for the annual Brolympus 5K Marathon. I honestly don't even know how to describe this awesome event, other than to just say you need to check out Brolympus for yourself! We ran the 5K Marathon (which also happened to be more of a shake-out run for most of us prior to the next days races - but don't tell that to Brolympus though, he wouldn't support not running this at Face Pace!), and then had a seriously awesome brunch, complete with tons of carb loading!

After the Brolympus 5K Marathon, a few of us went and hit the expo, where I got to meet Meb - one of my running role models - a 2004 Olympic Silver Medalist and winner of the 2009 NYC Marathon and 2014 Boston Marathon, and outspoken Christian! It was awesome, and he signed his book that I brought with me: 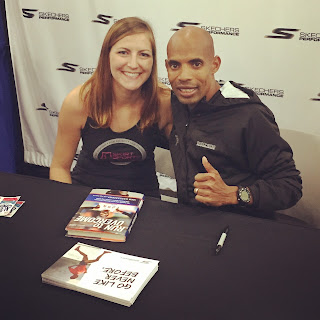 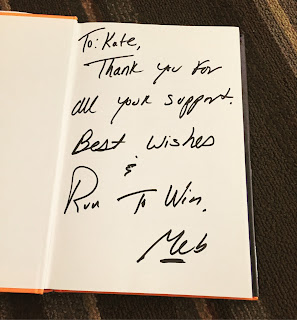 A few of us stayed downtown the night before the race and all had dinner before heading to bed before the big race! We were up the next morning just before 5:00am, so we could meet up with the whole crew at 6:00am for a group picture.

But, then just before 16, I had an epiphany. Well not really an epiphany, more of a "suck-it-up-buttercup" moment. I realized, there was absolutely NO POINT in being upset with myself. Yes, I was disappointed not to have a fast time (especially since I had actually trained with speedwork this time around!), but really what good would come from being upset about it? No one was going to care and it was just going to ruin my day. I came out here to have a good time and meet friends, so why not just just try to enjoy what was left of the race? So...that's exactly what I did! 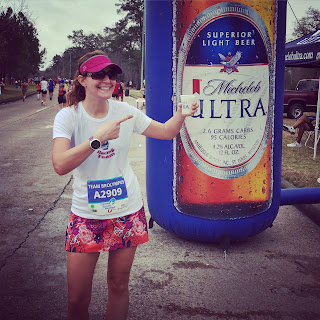 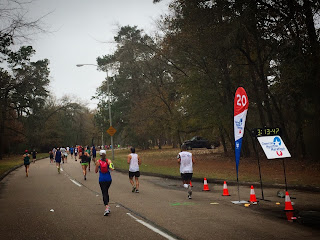 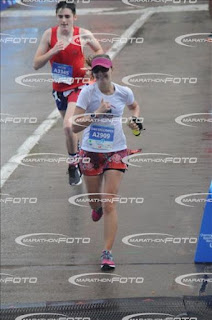 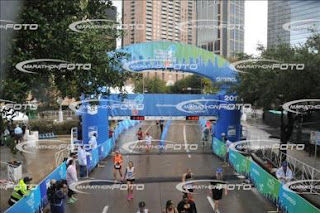 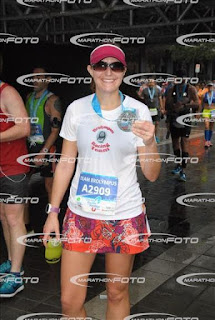 It was definitely an interesting race, to say the least... I have NEVER ran in humidity like that, especially for this length. It was weird because it didn't feel "that" hot, and yet, it did. It was also strange how I felt like I went from feeling pretty good, to just kind of dead rather quickly around that Mile 9 mark. Nevertheless, I still got it done and finished with the exact same medal that I would've gotten had I finished faster...As disappointing as missing a goal time can sometimes feel, I am truly just thankful that I can be out running, and that I am physically fit enough to do stuff like this!

After I got done, I headed into the convention center to try and find people from our group who were still around (most of the Half-Marathoners had finished hours earlier and had left already). There were quite a few enjoying the post-race breakfast (they have a complete breakfast post-race!), so I went and joined everyone, expecting to hear stories about everyone's amazing race times... but much to my surprise, a good chunk of everyone also really struggled with the heat - so at least I wasn't the only one!

Later after the race, we spent one last evening celebrating before we all left the next day!

As for race specifics, here's a little recap on things I liked and didn't like on this one:

So overall... this was an AWESOME weekend. No, my race performance was not one I'm super happy with, but that was not really the point in me coming to this race anyways, so I'm okay with it! I had a blast meeting so many of my "online running friends" and hope to see more of everyone in the future! 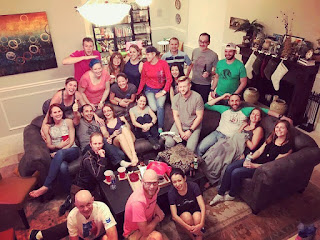