Three years ago I was blown away by the beauty of Moab when I first did the Moab Red Hot 33K. I was running it as a training run for my first 50K that would also be in Moab later that month. Ever since running this, I've always wanted to go back and do it again, but my racing schedule just hasn't allowed for it (I typically tend to be training for road races in the winter and early spring). So, when I found myself without any upcoming goal road races, and the race announced that they were looking for course "sweepers",  I jumped at the opportunity!

A course sweeper is someone who goes out after everyone else has started the race, and pulls the course markings / flags while making sure to stay behind any runners. It's also important to keep an eye out for any runners who may have fallen behind or gotten off course. Essentially, this was a great way for me to experience this awesome course again, without any added pressure of racing (which I really didn't need, since I know I wasn't in shape to really "race" anyways!), all while giving back to the running community!

When I ran this several years back, the weather was just about perfect. Unfortunately, mother nature had other plans this year, and we ended up with rain in the forecast! Luckily, my friend Randee was also course sweeping a section of the 55K, and had offered me a ride to the aid station I needed to start from (my original plan had been to run an extra 5.5 miles to this aid station - but with the rain, I gladly took her up on this offer. I'm also extremely glad I did, as my starting point wasn't in the spot I thought it was in - so I would've been a little lost out there before even beginning!). To get to this aid station, required going over a fairly rough 4WD road that thankfully, her and her Toyota Sequoia, handled very nicely!

Once we finally made it up there, she headed off to sweep her loop, while I waited around for about 20 minutes or so until it was time for me to start (I could not start until after 12:00, as that's when the course cutoff for runners to go by this point was). It was still raining out, and while it wasn't too bad, and I knew it would be fine once I got moving, it was COLD while just waiting around. Thankfully the aid station volunteers let me sit in their car for a bit while I waited.

At about 12:10, I headed off to start what I thought would end up being about 15-16 miles (it actually ended up at 18.5!). I had never course swept before and while I knew it would be more time consuming than simply running the course, I was in for a surprise at just how incredibly slow going this day would turn out to be! Nevertheless, I set out to start my adventure!

The first mile was a fast downhill, and even with pulling tags, I ended up with my fastest mile of the day at about a 10:30 mile. My job was to pull all of the pink/black tags - which were the "follow me" tags, as well as the green tags - which meant "don't go this way". Often times these green tags were fairly off course, and required some extra distance to go pick those ones up. 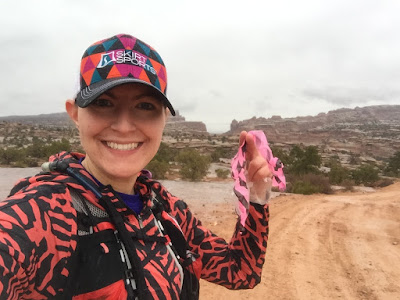 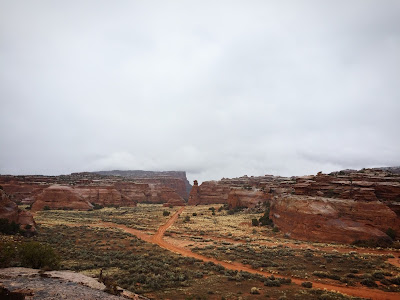 After that first mile, things slowed down significantly as the course turned flat, and then eventually up, up, and more up. About 3 or 4 miles in I came across two runners who were quite a bit off course. I slowed as I heard people talking and looked around a bit, just as they called out to me asking where the course was. I told them that I was right by a flag so if they just came back towards me, they would get back on course. After this happened, I decided to slow to a walk for a bit and let those runners get ahead of me quite a ways. My biggest fear was that someone would get off course, but I wouldn't see them, and I'd go on pulling tags, leaving them stranded out there (trust me, it can be difficult to find your way WITH pink flags showing the route - I cannot imagine how it would be without those!). 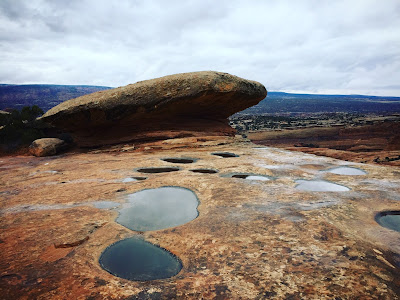 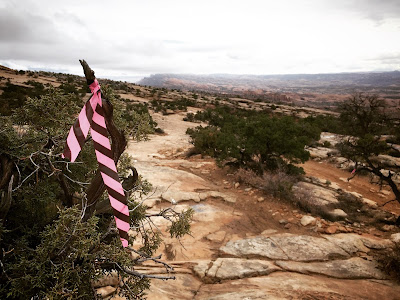 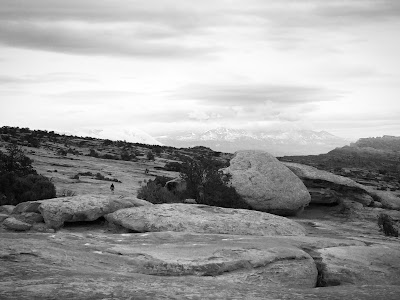 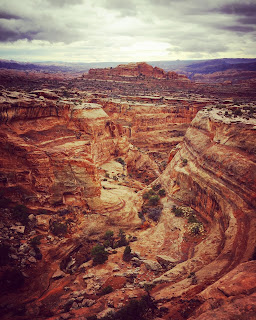 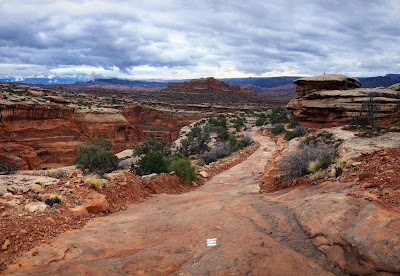 I spent the next few miles going pretty slow - to allow those runners to get a good head start, but also because the course had turned to uphill slick rock - which is one of the hardest things for me to run. I don't know why - the grade isn't even that bad, but it's a struggle for me. So I just kept at it, nice and slow, as I finally made my way to my first aid station of the day (which is the 2nd aid station for the 33K runners, and the 4th aid station for the 55K runners). The aid station volunteers were pretty happy to see me, as this meant they could pack their aid station up and go home for the day. Meanwhile, I was happy to see them, as I had about a million pink and green flags stuffed into my hydration vest and skirt pocket that I was extremely happy to be able to trash! After emptying my pockets, I grabbed a mini hersheys bar and went on my way.

It was supposedly only 6 1/2 miles to the next aid station, but this next section took FOREVER. I am not kidding - I was probably out there for close to 3 hours between these two aid stations. These 6.5 miles were also entirely on slickrock, which did not help my pace out! However, it had stopped raining about a mile back, so I was able to start taking lots of pictures again, including one stop at an awesome overlook where I probably spent one too many minutes attempting to get a selfie on the edge of a cliff... it never did turn out that great either! 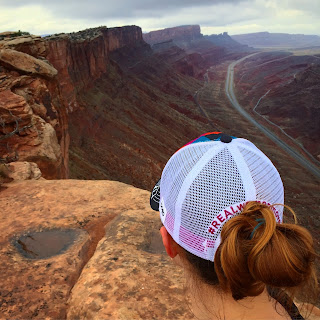 These next few hours were definitely the most lonely. I did come across one other runner, who had also gotten off course. Once he got back on course, he was quickly off and out of my sight, and I was once again alone, zig zagging between the various flags spread all across the course! After what felt like forever, I got to my least favorite section of the race - some very steep slickrock climbs, which were actually somewhat slick today given the rain, and subsequently sand, that had been tracked up onto the rocks because of the rain. Nevertheless I made it over those sections, and FINALLY made it to my second and last aid station of the day! 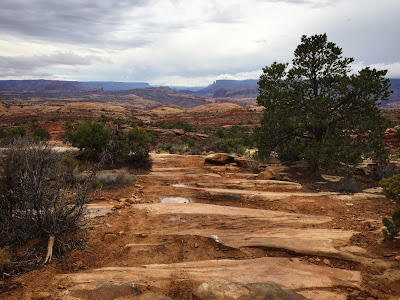 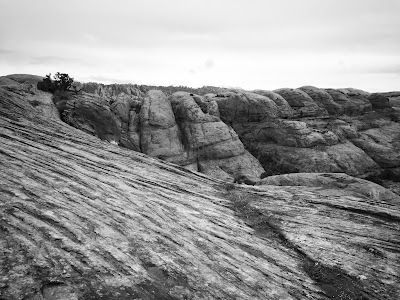 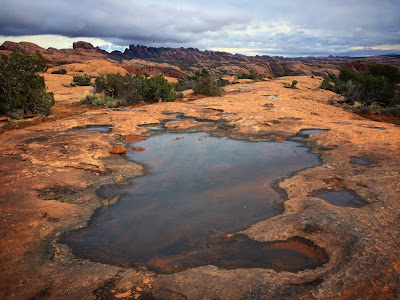 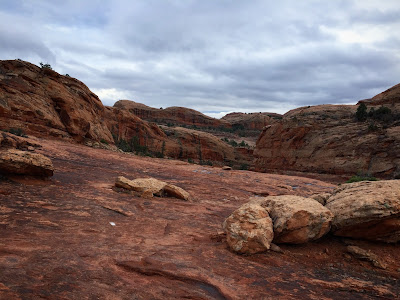 Once again, these people were pretty happy to see me, since they could now head home. I was pretty thankful that they still had a couple cups of Coke out, so I had some of that while emptying the two million flags I had collected during this section (this was seriously the most flags ever...I don't even know how I fit them all!). They let me know that the last runner was only about 5 minutes ahead of me. This was actually a welcome statement, as it meant I couldn't have ran any faster even if I had really tried, since my job was to remain the last person on the course (being alone for the past several hours had left me feeling like I was the slowest person ever, since this was taking me much longer than I had originally anticipated). 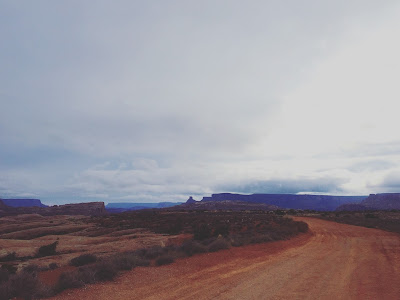 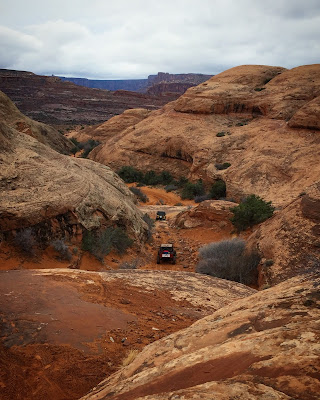 As I remembered from three years ago, the course is quite a bit easier after this last aid station, since the slickrock section is mostly done. You are also welcomed to the most amazing views of the Behind The Rocks area with the La Sal Mountains appearing behind them (although they were a little cloud covered today - still gorgeous though!). The race course continues on a nice sandy dirt road for about a mile and a half before it turns much more rough for a couple more miles, until you finally get to the overlook that means you're almost there: 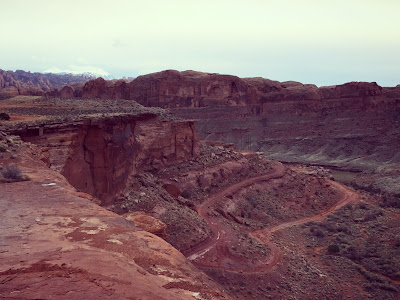 Once you hit this overlook, you've got a bunch of downhill switchbacks (which were WAY more rocky this year than the first year I did it), and then you're essentially finished. As I approached the switchbacks I came up on the last place runner - chatted briefly with him, and then let him go ahead again as I made my way down picking up my last few flags before finally finishing in just shy of 6 hours, right as the sun was coming down! There was a little bit of running, a lot of walking, a fair amount of picture taking, and SO. MANY. FLAGS. but it was pretty awesome nonetheless!


Overall, it was a great weekend! After the race, we went to the official race "after-party" where I got to hear legend ultrarunners Ian Torrence and Scott Jurek talk, and then the next day a few of us went for a hike to Morning Glory Arch before heading back home!