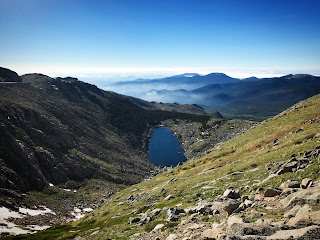 I have wanted to do the Mt. Evans Ascent for several years now. My big plan back in 2014 was to do it as training for Pikes Peak Marathon. Unfortunately, it conflicted with the Leadville Trail Marathon that year and I had to choose between the two. Since Leadville and Pikes Peak are both on trail and this one is on road, that made my decision for me. The following two years the race seemed to conflict with more things I had going on...

So back in April when  I got an email about this years event, I decided to take a long hard look at it again. It was finally on a weekend I was available...but it was only 1 week after my goal marathon of the season, Revel Rockies. What's a girl to do? Well, I ended up deciding to just go ahead and do it! Would I be able to race my hardest? Probably not given that my legs would still be dead from Revel... but I also knew it was an UPHILL race with close to 4000' of gain and it topped out at OVER 14,000'. The chances of me being able to run this fast anyways were pretty slim. I might as well go ahead and do it... Plus, I could set the bar nice and low so if I ever do it again, I'll have a better shot at a PR!

All that being said, I was still somewhat hopeful on race morning that I pull off a sub-3:00 hour finishing time. The cut off for the race is 4 hours and 30 minutes, but women who finish under 3 hours and men who finish under 2:40 get an extra finishers award (a cool rock with a plaque on it). Oh how naive I was in my thinking that I could run sub-3:00... My reasoning had been that I ran Black Canyon Ascent at a 10:45 average pace. To run this in under 3 hours, I needed to average an 12:24 pace. I could totally do that.... (kind of forgot about that little thing called "altitude").

Beginning at an elevation of 10,600', the race started out pretty good with my first few miles in the low-12:00's. Around Mile 3 I slipped to 12:31, then 12:43 for Mile 4. This was going to be harder than I thought... It was around this point that I had to make a decision: really push myself to try and go sub-3:00? Or, take it a little easier and just enjoy the views? My post-marathon, still recovering body really liked the idea of just taking it easy...so that's what I did (only, I'll be honest in that it was still most definitely NOT "easy"). Plus, the views were STUNNING, so I was really glad I decided on this route and could then stop for pictures like this: 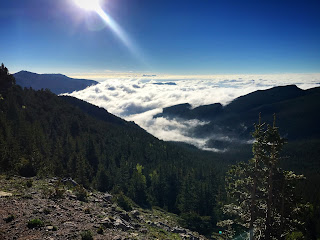 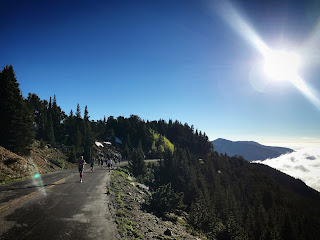 The race had aid stations approximately every 3 miles, so I used these to break it up mentally into 5 sections: 1-3, 4-6, 7-9, 9-11.5, and 11.15-14.5. Starting about Mile 5, I started alternating between running and walking. There were several other people doing this and they appeared to be making just as good of time as the people running it, so it seemed like a pretty good idea. The trick was to not let yourself walk for too long. Just enough time to recover and bit, and then start running again. 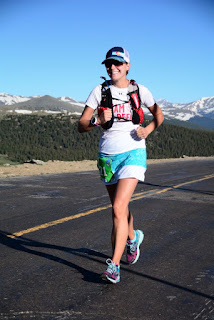 As the miles continued to (SO) slowly creep by, my walking picked up a little more. I tried to use the snow poles along the side of the road as a guide - run 2 pole lengths, walk 1 pole length, and repeat. It actually worked pretty well.


Finally around Mile 9 is the only part of the course where you get a break from going "up" - you instead get about 1/2 mile of gradual downhill to Summit Lake and the Summit Lake Aid Station. I had a love/hate relationship with this downhill... on one hand, it was really nice to not be going uphill for a bit. On the other hand, I'd been counting down the elevation gain on my watch... I had just gotten to 13,000 feet, and now we had to go back down to about 12,800'. That was all elevation gain I was going to have to do AGAIN in a minute. 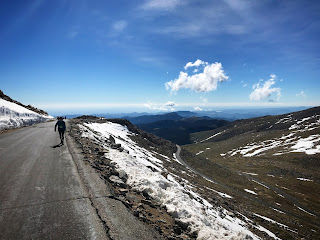 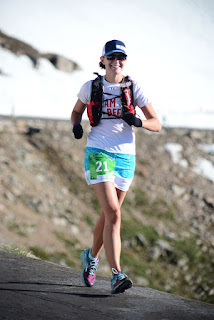 I stopped at the Summit Lake Aid Station pretty briefly and then braced myself for the remaining 6 miles of the race... It was only going to get harder from here on out, not to mention steeper. And sure enough it did. The next mile was so, so steep. Nevertheless, I just kept at it. Walk, run, walk, run, take some pictures, run, walk etc. 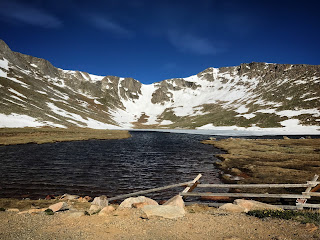 Just before mile 11 is when the switchbacks start. Steep, winding switchbacks for the remainder of the race. Along the first switchback was the final aid station. I took some m&m's and continued on. The higher the altitude got, the slower my running got (and the more I started walking). After about 13,000' I really started to struggle. I felt like running for longer than a minute or two and I couldn't breathe (I've hiked at this altitude a lot, and even done races - Pikes Peak, Imogene, Leadville, but those were all on steep trail, so I'm just walking by that point anyways...this road wasn't that steep - but trying to run it, even for a short while was just SO hard). Just keep moving I told myself. Keep moving and you will finish (eventually)! 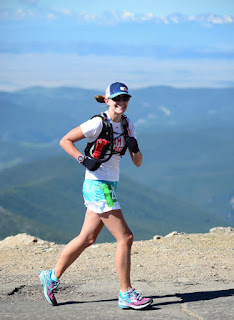 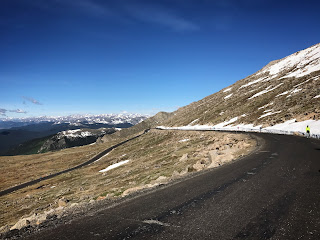 These last couple miles to the summit were SO, so slow. I definitely saw the 3 hour mark slip by. Nevertheless, I just kept going. I kept looking up and it felt like the top of the mountain was not getting any closer... until all of sudden I saw the finish! It came as a surprise, since the finish is below the actual summit (I was aware that the parking lot / road ended before the actual summit, but it was still sooner than I expected). I did my best to pick it up, but being above 14,000' by this point made it pretty difficult. Nevertheless, I finished in 3 hours, 15 minutes and 27 seconds! 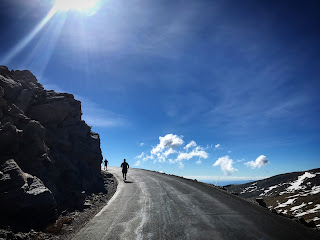 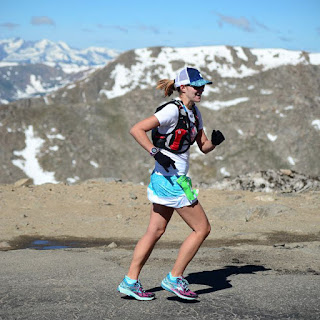 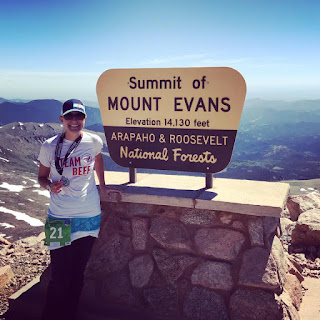 
After the race, I of course had to hike from the parking lot to the top of the peak, which was about 1/3 of a mile: 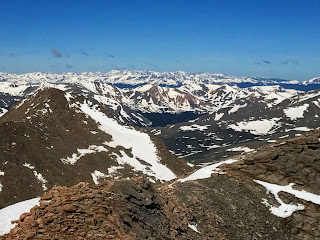 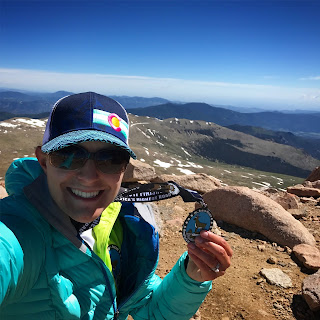 Also, a quick recap of the rest of the weekend... I actually spent it with some friends in the Frisco/Dillon/Breckenridge area. On Friday, I drove up to Hoosier Pass and explored a bit, then on Saturday we did a hike to the top of Mt. Royal (10,502'), and checked out some breweries!