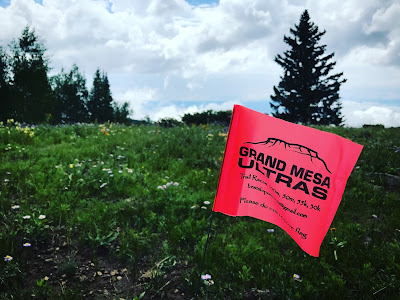 If I had one phrase to describe the Grand Mesa Ultras, it would be "deceivingly hard". I'm pretty sure I went over this in last years 50 mile recap, but my thoughts remain the same this year. Look solely at the elevation profile of this course and you think it'll be easy...yeah, it's not. Not only is the entire course above 10,000 feet, but it is super rocky and technical...making you run at least 25% slower than you think you will. Nevertheless, it's a beautiful race, close to home, and so I'm sure I'll be back again next year...

As mentioned, I did the 50 miler last year. I was tempted to do the 50 again because my favorite part of the course is only in the 50 and 100 (and I definitely wasn't going to do to do the 100!), except my running kind of dwindled off after early June's Revel Rockies Marathon. I've probably been running about 15 mile weeks or so for the last month and a half...so I had to choose between 30K and 55K. Given said 15 mile weeks with very little of that being on trail, I probably should have done the 30K... but I like a challenge, and had been missing the ultra world, so I figured, might as well give the 55K a shot!

The race started Saturday morning at 6am, so I headed up the night before and stayed with some friends in a cabin. It was my first time staying overnight up there and I loved our little lodge - I will definitely look into staying up there again!

The course is best described broken up into 5 total sections, so without further ado, here they are:

The race starts out on the Grand Mesa Lodge Trail, which connects the Mesa Top parking lot to the Crag Crest Trailhead/Parking Lot. This section is a little tricky because it's not very well defined and is a bit overgrown. Heading "outbound" isn't too bad though because it's more downhill and it's at the very beginning of the race.

Since there were a lot more participants this year, this section was much more bottle necked than last year which kept me going nice and slow. This was probably for the best, and I enjoyed the easy pace out. After about a mile and a half, you get some awesome, very runnable downhill which is a blast (just try not to think about how you have to come back up it later)! That downhill takes you down around the Grand Mesa Lodge where you then cross Highway 65 (they have volunteers watching traffic for you) and have another short quarter mile or so before you get to the first aid station, and thus the end of section 1. 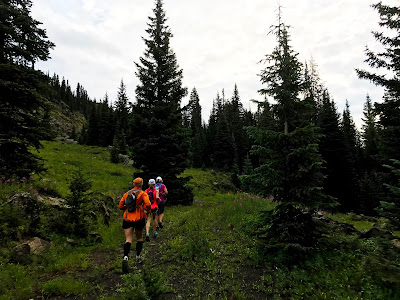 If you have never been on the Grand Mesa, or hiked Crag Crest Trail, section two is going to be the BEST section by far, in terms of views. It's the high point of the course and you come out around Mile 10 right on the "crest" where you have 360 degree views. It's pretty incredible!

But I'm getting ahead of myself... section two is a "lollipop", where you have a short out section and then a loop, with the "lower loop" first, which winds it's way through trees and some beautiful wildflower sections before you finally start your ascent to the crest around Mile 8. If you're a mid-to-back of the packer like me, this is where you can plan to have a nice couple miles of consistent hiking without much running.

Finally, around Mile 10, you hit the crest! It's beautiful, and yet, still nice and rocky, making running still a bit of challenge. Nevertheless, you can kind of jog/walk for the next 2 miles along the crest, stopping to take lots of pictures if you feel so inclined (like I always do)! Finally, around Mile 12 starts the descent back to the Crag Crest Parking Lot / Aid Station at Mile 14.5. This is one of the most runnable sections of the course (aside from Mile 2-3 at the beginning).

I had the pleasure of running most of the lower loop with run club friends Karla and Penny. It definitely helped pass the time having "#ultrabuddies" to chat with! 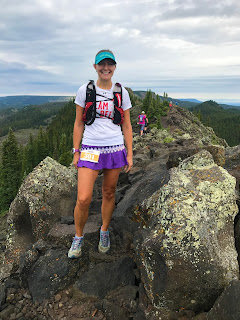 Section 3 is BY FAR my least favorite section of the entire course. It was last year, and it was again this year. The only good news was that I was more mentally prepared for it this year. I knew ahead of time it was going to be miserable. It's mostly uphill, the trail is not well defined, I always stumble on a million rocks, and it is seriously the. longest. 3. and. a. half. miles. EVER.

But nevertheless, you get through it.

Since I knew going into it that I was going to struggle on this section, I decided to get out my music about a mile in. Only my headphones were not working! What to do?? I never want to be "THAT" person with the annoying music playing on their speaker instead of headphones...but there wasn't anyone super close by, aside for the occasional 30K runner passing me (the 30K starts 1 hour later, so the really speedy racers pass you), so I decided to just go for it... And I'm glad I did. This section was still a struggle for me, but this helped immensely. I eventually got through the worst 3.5 miles and made it into the Mesa Top aid station!

I was now 18 miles into the race with 16 to go. I quickly grabbed some food from the aid station, some mango's out my car, and headed onto the Mesa Top Trail. I had just under 8 miles to the final aid station - Flowing Park.

I've ran Mesa Top several times and it's amazing how much "easier" this trail feels on fresh legs, vs. 18+ miles in. It's slightly downhill so I was hoping to run most of this, but just like last year it was much more of a run/walk. Nevertheless, I kept on chugging...one mile at a time. One foot in front of the other.

This section is mostly trees, but there are a few sections that open out to beautiful wildflowers and some great overlooks! With a couple miles to go, I looked out from the edge of the mesa and saw the coolest site: all of this fog was rolling in towards the mesa, eventually just settling right on the edge. I stopped for several minutes just enjoying the scenery and taking way too many pictures! 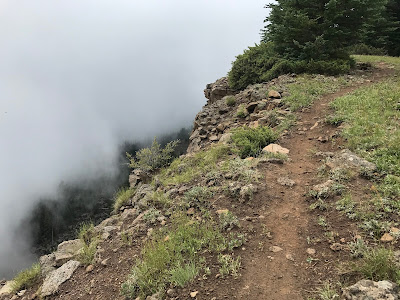 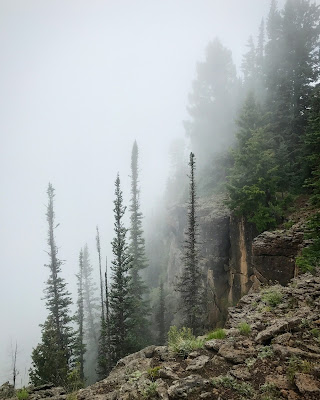 As I got to the Flowing Park aid station I grabbed some coke and chips, chatted for a minute with some friends who were volunteering, and then began the trek back towards the finish!

Given my lack of training this was kind of painfully slow. I wanted to run more and yet I also didn't.
The fog was still lingering in places, so I stopped for more photo's as I made my way back. With about two and a half miles to go my watch died. A little over a mile to go and I started chatting with a fellow Skirt Sports Ambassador who I hadn't met in real life before. She actually kept me motivated pretty well and I managed to pick up my pace a little. Finally we passed by the small pond that signals you've got just over a mile to the finish line. I tried to run as much as I could (for the longest mile ever) until finally finishing in 8 hours, 34 minutes, 18 seconds! 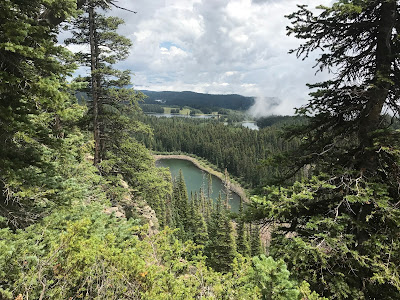 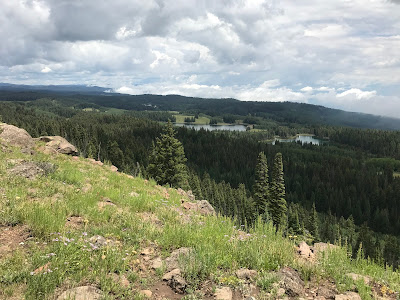 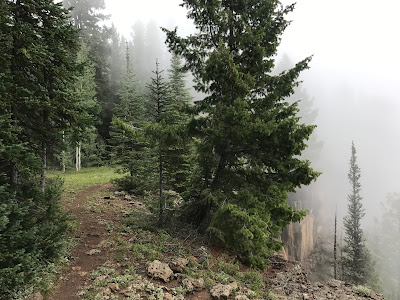 After the race, I volunteered Saturday night working an overnight aid station for the 100 milers. I still want to try a 100 again someday (haven't decided when attempt #2 will be just yet), so I thought it would be fun and inspiring to give back a little and help out! I'm not sure how inspiring it actually was (it actually more made me seriously question ever wanting to do a 100!), but it was still fun to help out. This is seriously a beast of a course, so HUGE congrats to those who finish the 100!