I headed to Rocky Mountain National Park last weekend, primarily to run the Rocky Mountain Half Marathon, but also ended up exploring some great trails while there, which I think warrant their own post. I ended up hiking/trail running to three different lakes - and given that "Peak Bagging" is such a big thing in Colorado, I decided to name this post "Lake Bagging" (yes, I'm that cool).

I don't remember where I first saw a picture from Sky Pond, but ever since then I've been wanting to go check it out. It's a 9ish mile trek up from the Glacier Gorge Trailhead. I posted on a Front Range running group about my plans to do this on Friday morning and was pleasantly surprised to see my friend and fellow Skirt Sports Sister Dawn was up for joining me! We ran last year's Skirt Sports 13er together, so I was excited to get to catch up with her again!

We met up in Estes Park at 6:45am on Friday morning to carpool into the park. As one of the top visited National Parks in the country, parking can be a bit of an issue, but we hoped with our early start time we would be okay. Unfortunately, when we got to the Glacier Gorge Trail Head it was ALREADY full! Thankfully, you can also park at Bear Lake and it only adds about a quarter mile round trip and luckily that one had not filled up yet!

Once we got parked, we quickly headed out onto the trail. There were people out but not too many at this hour and we were able to settle into a nice run/walk pace. With just about 2000 feet of elevation gain over the course of the trail, it's constant uphill but nothing overly strenuous or steep for the first 4 miles. Along the trail you'll pass by Alberta Falls and Loch Lake. Around the 4 mile mark you reach the only "technical" part of the trek - climbing up along the side of a waterfall. It's a little intimidating, but we eventually made it to the top!


Above the waterfall climb is "Lake of Glass". We spent a few minutes there trying to figure out if this was Sky Pond or not (as we didn't see where the trail continued on), but we quickly realized it was not and got some direction from other hikers on where to go from there. It was just a 1/2 mile or so over to Sky Pond! We made out way around the side of the Pond and stopped for a few pictures before heading back down. It truly was beautiful! I love spending time above treeline! 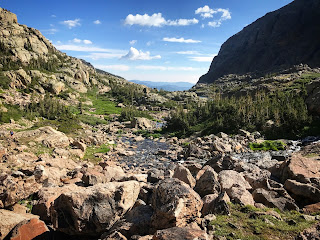 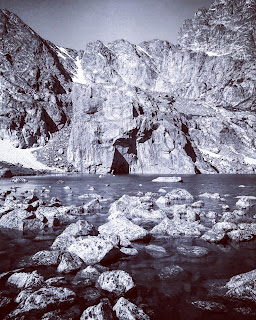 We ran most of the route down with the exception of a few technical areas and bottlenecked areas as the trails were getting crowded the closer we got to the trailhead. With a couple miles to go the rain started and lasted for about 20 minutes. As we got back to the trailhead, I saw that my Garmin was at about 9.5 miles, so we also did a loop around Bear Lake so I could reach 10 miles. Bear Lake is a short, very popular loop trail right off of the main trailhead. 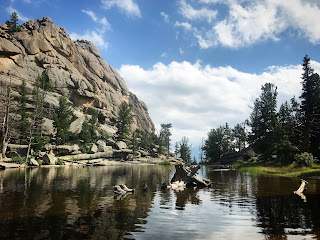 On Friday afternoon I had some time to kill so I decided it would be the perfect time to go hike Gem Lake again. I have hiked Gem Lake in the past - many years ago, back before I started running and hiking regularly. I remember Gem Lake being SO, so hard back then, and so I had wanted to do it again to see how it felt now that I run trails all the time. This is a short but fairly steep hike - 1.7 miles one-way up to the lake with over 1000' of elevation gain.

Well, it was still a lot of uphill as I remembered, but compared to some of the hikes I've done, it was very doable. I made it to the top in just about 35 minutes. The weather was perfect, so I decided to just hang out for awhile at the top and enjoy it before running back down. 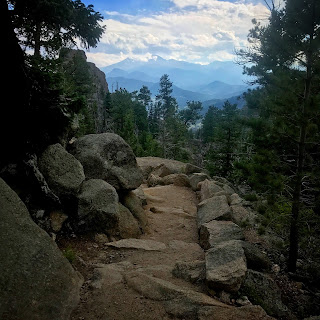 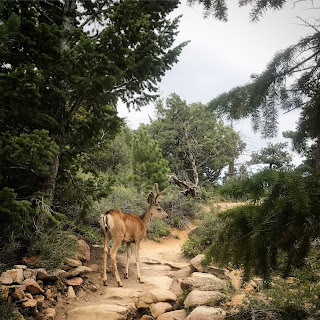 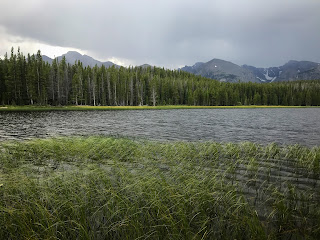 After running the Rocky Mountain Half, Kellee and I headed into the park for what we thought would be a short hike. The trail starts out hiking straight up for the first mile. I had thought you'd be able to see Bierstadt Lake from the top of the climb, but it turned out you had to take a loop around to the other side of the lake to be able to see it. I'm glad we made it though because it was beautiful - especially with the rainy weather that was going on. 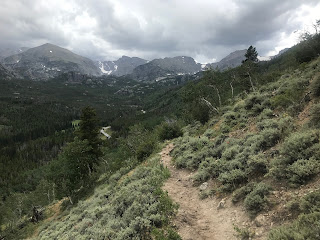 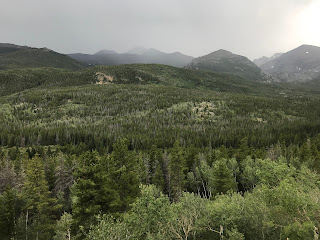 After stopping for a few pictures at the lake, we continued on around the lake, thinking we would meet back up at the junction to take us back down the way we came up... well we must have missed it because we somehow ended up on a very different trail - quite a bit steeper and much more rocky. Thankfully I recently downloaded the REI Trail Run Project app which maps to all the popular trails in the area pre-downloaded so you don't need to worry about having cell service. I pulled that up and found that, as we thought, we were not on the same trail we had gone up, but that this would still take us back - it would just add about a mile and a half! So not quite the short little jaunt we had planned, but still a great hike! 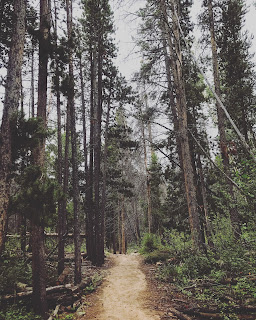