I took the above picture on one of my morning jogs last week of the San Juan Mountain Range. When we first moved here, I was curious which peak was the tallest we could see, and quickly found out it was Mount Sneffels. Now Mount Sneffels is not the tallest in the San Juan Range, just the tallest as seen from where we live. It also so happened to be a fourteener, at 14,150 feet, and so it, of course, had to be added to our Summer Bucket List. Now, I'm definitely not one of those people that wants to hike all 53 14ers or anything, but I enjoy one every once awhile - the views really are phenomenal. Unfortunately, they are also usually very crowded - meaning you start out at 5:30am, and there's probably already at least a couple groups in front of you. But with Mount Sneffels being so close to us, I was ready to give it a shot despite the fact that I was a little hesitant - afraid it may be a little more difficult than anything I'm used to.

My hesitancy came from both the 14er's website (www.14ers.com), and our attempt at hiking Blue Lakes Pass back in early July. The 14ers website is awesome if you ever want to hike a 14er - it has step by step driving directions, and hiking descriptions complete with pictures. The pictures are what made me a little nervous. I get very scared when I'm stepping on loose rock, and know one wrong step could lead to my death, or at least some serious injury. Plus, when we hiked Blue Lakes Pass I had to turn around before we got all the way to top of the pass because of a situation involving that same thing. So needless to say, for awhile I was thinking that maybe I wasn't so sure I wanted to try it after all.

Well I'm not sure exactly why I changed my mind, but this past week I decided, what the heck, you only live once right!? I can always turn around if I need to, but if I don't even give it a shot then I won't know. So yesterday we set out on our first 14er for the year, and our first 14er marked as a "moderate" difficulty rating. So without futher ado, here are the stats followed by our adventure:

Description: Hike to the top of Mount Sneffels - 14,150' feet tall - Ranked #27 of Colorado's 53 Fourteeners
Location: Near Ouray and Telluride, Colorado (you have to go through Ouray to get there, but it's actually much closer to Telluride "as the crow flies")
Date: August 4, 2012
Round Trip Distance: About 8 Miles
Starting Elevation: 10,700 feet
Ending Elevation: 14,150 feet

We started out the morning nice and early because we know that A.) there's always large crowds hiking 14ers and we wanted to start out before them, and B.) you always want to make sure to give yourself plenty of time to be off the mountain prior to any afternoon thunderstorms. So, we left the house around 4:00am, and parked the car around 5:30am. We decided to park below the start of the 4WD road because we weren't sure how bad it would be and didn't want to have to worry about passing people on the way back down. Plus, it was only a 6 mile hike from the lower trailhead, and only 2.5 miles from the upper trailhead, so I was fine adding an extra mile each way to park below, making it an 8 mile hike. 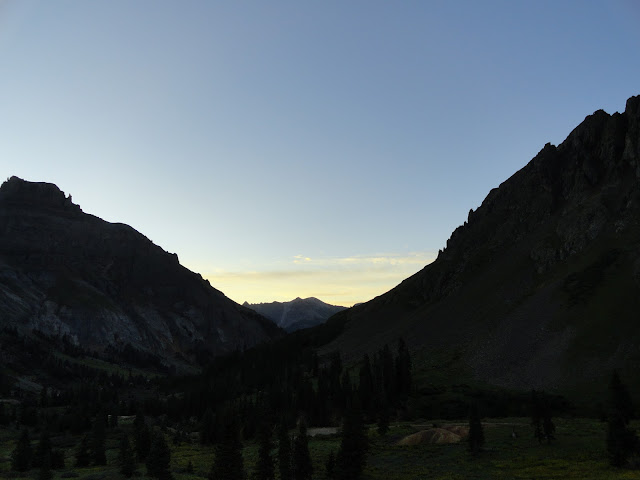 The first 3 miles were relatively easy. Quite a bit of elevation gain, but the trail was dirt road for the majority of it. The difficult part was the last mile. I mean seriously, how long do you think it can take someone to go a mile!? Because trust we when I say, it can take a long time. I wasn't timing, but I'm thinking it probably took us about 2 hours to go up that last mile, and 2 hours to come back down that mile. We had an elevation gain of 1700 feet to go in that 1 mile, and it was no easy task. Now I mentioned earlier how I get quite scared when going up any loose rock. Luckily, this wasn't as bad as Blue Lakes Pass, but it was still making me pretty nervous.

There were 2 difficult sections leading up the "notch," and then one last short climb up to the summit. The first difficult section started right after we passed the 13,000 feet elevation marker. You'll see a picture below, but we were pretty much going straight up a bunch of medium sized rocks to the saddle. Once we reached the saddle, we turned left, and went straight up some more. This time the rocks were more of large boulders, and we had rock walls on each side of us. This I didn't mind so much as the boulders were pretty stable. About half way up though, they we were back to smaller rocks so I had to slow down a little and take my time. It also felt like no matter how much we kept going up, we weren't getting any closer. We did finally make it, and that's when we had to go over the "notch." Again, you'll see a picture below, but basically it was a V shaped notch that you had to boost yourself up and over, with a pretty steep sloped drop off on the immediate left side of it. The notch was also angled backwards slightly, making it even more intimidating. Thankfully I had Scott to help me over and I made it to the other side. Once you reach the other side, you've got a little bit more climbing, probably only 50 feet or so, and then you're finally at the Summit! And of course, the views from 14,000 feet up were outstanding. We couldn't quite make out Montrose, but we could see the Grand Mesa, Telluride, Lizard Head (where we hiked in early June), Uncompahgre Peak (the tallest 14er in the San Juan Range), and the Blue Lakes. 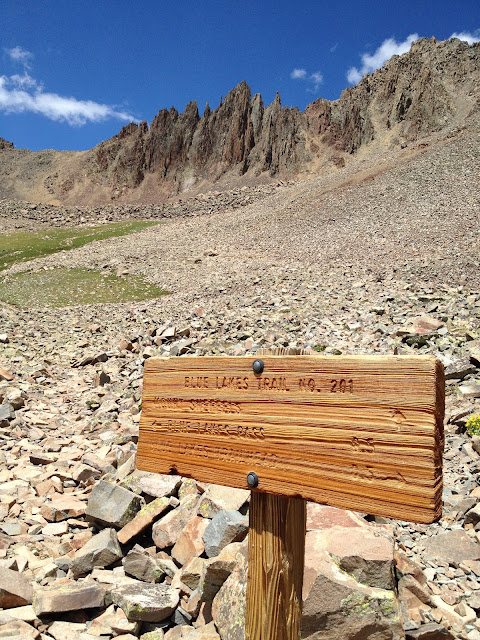