Let me start out by bringing up something that I am somewhat struggling with lately. I've been running for 3 1/2 years now and in those three and a half years I've done a few races (58 - but who's counting?). When I first started running, getting a PR was easy. The more I ran, the faster I got, I PR'd all the time. Now? Well it's a lot tougher now.

I'm going to let you in on a little secret: I am NOT a naturally fast runner.

(Okay, so maybe that wasn't much of a secret).

That being said, 2015 was an interesting year. I trained a LOT in the first half of the year and had some great PR's (HUGE PR's honestly) - I took 21 minutes off of my Marathon time when I ran my current PR of 3:41:35 in February and I took 17 minutes off of my Half Marathon PR over the course of a few Half Marathon's running a 1:39:44. HOWEVER - guess what? I worked my butt off for that...and unfortunately, since, as previously mentioned, I am not naturally fast, I have to KEEP working my butt off to remain fast. So when my training declined over the past few months (mostly for my well being - I was burned out!), guess what... I lost a TON of that speed. And my last few races have clearly shown that. So...I just want to clear the air (both for myself and the few people reading this) because I have 2 more races this year: I will not be PRing them. I am not in shape to PR them. So please stop wondering why my races have been so "slow" lately. Thank you ;)!

Now onto the race recap. I am still behind on some other posts I need to do, but I took a ton of pictures at this race I want to share and so I just figured I might as well just do this recap while it's all still fresh in my mind. So without further ado, the U.S. Bank Rim Rock Marathon:

Since it's a pretty well known and larger event on the Western Slope, I've wanted to run this since I first started running marathons (well, I actually wanted to do the relay even prior to that). Unfortunately, the last few year's it just didn't work out, so I had to jump on the chance to do it this year. The race runs through the Colorado National Monument, starting just outside of the East/Grand Junction entrance, heading into the Park, where you then get to ascend about 2000+ feet in the first 8 1/2 miles (although, the majority of the climbing is actually in 2-5, the rest of the miles are more gradual), then you get a few downhill miles, before the last major climb of another couple hundred feet to the half-way point and then it's finally (for the most part) downhill from there until exiting at the West/Fruita side of the Monument where you then make your way to the Finish Line in downtown Fruita. Needless to say, it's not the easiest Marathon course out there. However, it is on the scenic side, which makes it all worth it.

I knew going into this that I wasn't in my best, or "fastest" shape, so I didn't set much of a time goal (and yet there I was getting all bummed about my time - hence the beginning of my entire post...ugh). I just wanted to go out and enjoy it. Which is what I did during the race - it was actually the post-race - hearing other people's speedy times - that got me somewhat depressed. Seriously though..."Comparison is the Thief of Joy" - MUST remember that!!!

Enough of my rambling already - let's get to recapping the darn race already, right?

The gun went off about 1 or 2 minutes early (a little weird, but I was there and ready, so I didn't care). The first mile starts off at a gentle incline as you make your way into the Park (and yes, I know it's a "Monument" and not a "Park", but Park is shorter, so just go with it, okay?) before the real climbing starts at about Mile 2. Miles 2-5 are the steepest sections, as mentioned previously, but luckily I felt like they went pretty quickly. The first aid station was at about 2.5 and, even though it was only 30's out, with the uphill, I had warmed up a lot already, so I tossed my long sleeve and gloves. Tossing the long sleeve shirt was fine, but the gloves? BIG MISTAKE (but we'll get to that later). I grabbed a piece of banana and some water and continued on, making my way up to the tunnel.


On regular days (i.e. when training on the course), pedestrians aren't allowed in the tunnels, so I was pretty stoked to finally be able to run through them - and it was just as neat as I was hoping. There's one tunnel on the uphill climb (east side of the park) and two on the descent (west side of the park). The east tunnel was longer than I was expecting and I couldn't see much during the middle of it - but thankfully I could see the light from the other side to direct me as I made my way safely through (it's just a good thing there weren't any banana peels on the ground).

You're left with approximately 1 more mile of steep climbing once you exit the tunnel before it flattens out for about 1/2 mile. Enjoy that 1/2 mile, because it's back to some more uphill until about Mile 8 1/2 when you FINALLY hit the high point of the course at 6,640 feet. After that, you get about 2 1/2 downhill miles before the last "big" climb through Mile 13 (back up to 6500-something). During this entire section - and I believe it was because we A.) made it to the top of the first major climb, and B.) switched direction, it got PRETTY chilly - and I was majorly wishing for my gloves again (seriously, my hands were FROZEN for a few miles)! The wind had picked up a bit (and kept at it for awhile). Too late now though - thankfully I had at least kept my ear warmer/headband on!!


Shortly after Mile 12, is where the Relay-ers switched off so, of course, some of the speedier second-leg relay members would speed by me pretty quickly. I just tried to keep in mind that they were on fresh legs (albeit - COLD legs too - apparently the relay-ers have to wait around for 2+ hours in the 30-something degree weather!!). By this point, however, I wasn't too focused on them, as I was feeling SO happy to finally be headed downhill for the majority of the remaining miles!

In all honesty though, I had hoped to run my downhill miles MUCH faster than I did. I had put my Garmin in my pocket (so I wouldn't be too distracted by my slow uphill miles) so I really had no idea what pace I was running these at. Looking at them post-marathon, I am surprised I wasn't running them faster - I am wondering if it was the wind? Typically on downhills, even if I'm not putting a hard effort into them, I can do sub-9:00's, but I only ended up with 3 x sub-9:00 miles over the entire course - just an interesting observation for me. That being said, I was also on pretty tired legs by that point - I think the early climbing miles wore me out WAY more than I was expecting - even if I was trying to "take it easy".

So anyways, with the uphill out of the way, I continued with my "enjoy it" attitude and took several more pictures. The views get pretty great in the last several miles before the Visitor Center: 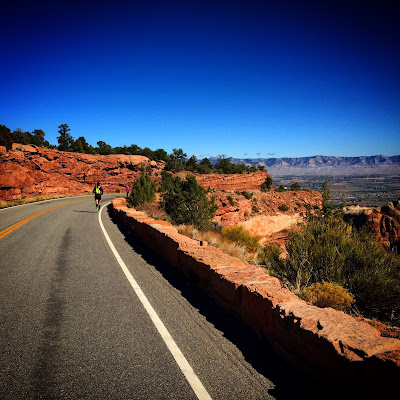 One you get passed the Visitor's Center at Mile 19, it's a lot of steep downhill until 23. I was definitely feeling kind of tired by this point, so I just let gravity carry me down these miles and continued to take in the views. The two west side tunnels were around 21 or 22 and were just as fun to run through as the earlier one: 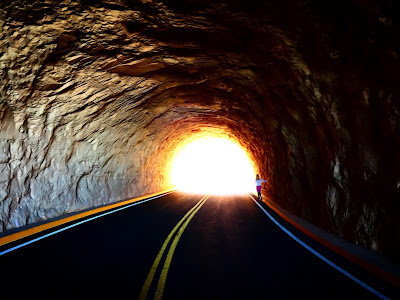 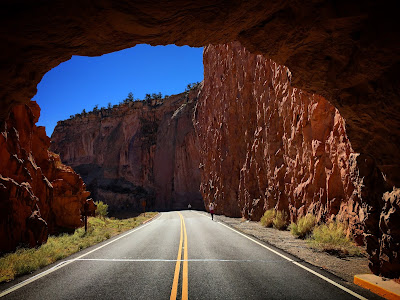 You finish most of the descending and exit the park shortly after Mile 23. I was worried the last 3 miles would be really tough for me, but I did still manage to have some energy in me and kept my pace up pretty well (well as well I typically can when in the last few miles of a Marathon) as I headed into Fruita. You've still got some downhill until about Mile 25 when you head over the Colorado River, and then it's flat with the exception of the horrible part where you have to cross over I-70 (tons of traffic and it was, of course, uphill - at mile 25). Thankfully though, once you get over the I-70 bridge, the finish is SO close, you turn right onto Aspen Ave (essentially the "Main Street" of Fruita) and it's only about one short block away! It was awesome (I hate when you can see the finish line for a really long time - this was a nice surprise - turn and all of a sudden you're basically there!).


I ended up finishing in 4:28:31 - my slowest Road Marathon thus far (by 1 minute), however, also my most difficult. I know it has the downhill to make up for the uphill - but honestly, it was definitely tougher than just running a flat marathon (for me anyways). I really feel like the uphill took a lot out of me in the first half and I struggled to run the downs fast (granted, I definitely wouldn't say I pushed as hard as I could have on the downs - but even still - I could tell I didn't have much more in me even if I had wanted to). That being said, I'm glad I ran this - it's an awesome local race and I love the beauty of the Monument. I know I will run it again so long as I continue to reside on the Western Slope (although, there's a good chance I will be doing the Relay next time!).

Side note: I just realized that some of my "downhill miles" are probably not as fast as I was expecting because I opted not to carry any of my own water or fuel and instead walk through all aid stations (to give myself a minute or so to eat and drink - so between that and taking pictures, I probably added, at minimum, 5 minutes to my time).