The Golden Leaf Half Marathon has been on my to-do list since the first year I got into running. I had just ran my first half marathon and the thought of trail running intrigued me - but also scared me as well. I hadn't done anything like it yet. I can't remember how I came across this race, but thought it would be a great first trail half - tough but the scenery would be worth it. Unfortunately, me being the newbie runner that I was, did not know that some races sold out. Within hours. And I missed registering for it.

As sad as I was about it, had I not missed registering for this, I never would have ran Imogene Pass Run back in 2013 - so in a way it was a good thing (as Imogene was SO scary for me at the time - I feel like running that race broke so many barriers for me - teaching myself that even people like me - who have never been athletic/outdoorsy/adventurous, could in fact do hard and difficult things!).

So, when all is said and done it was a good thing I did not run this back then. But it also meant that I had to do it this year - especially when I had another friend interested in doing it with me (always a nice bonus!). So Rochelle and I both registered back in April, right when it opened and were all set to go!

We stayed in Carbondale the night before the race, then got up early and headed to Snowmass. We ended up getting there with tons of time - so after we got our race packets, we walked around the ski area a bit and snapped some pictures:


With about 30 minutes until go-time, we went and dropped off our layers at the car and then headed back to the starting line. I found a friend of mine from MyFitnessPal and we snapped a picture as well before heading to our starting corral:


The first 1.75 miles of the course are straight uphill - so, as planned, I walked most of them. This section was on a dirt service road up the ski area. After the climb, there was the first aid station and then we got onto single track for the rest of the race. While most people love single track, I honestly have a love/hate relationship with it. It's much tougher to run - especially if it's a popular biking trail as it will often be rutted out. Plus in races, it makes passing very difficult. I felt like I was constantly looking behind my shoulder (while also trying to stay aware of what was in front of me to avoid any falls) to see if the person behind me was catching up enough to pass. Despite all of that, however, single track is pretty gorgeous! Being on a small trail running through the forest with tons of aspen tree's and golden leaves all around...there's not much else like it. So, overall, I'd say it was still worth it! 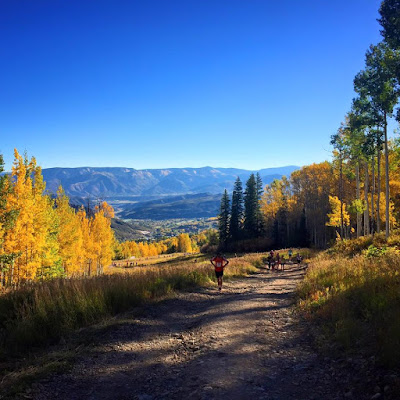 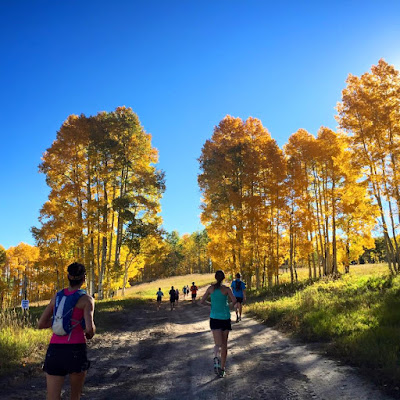 We ran mostly through tree's for the next 8-9 miles with the occasional opening in the tree's when we ran across another ski hill. I'm always torn during trail races on whether to stop for pictures, but since this scenery was just to DIE for, I kind of had to keep stopping! I got some pretty awesome pictures, so I think it was worth the extra 5 minutes or so I wasted! 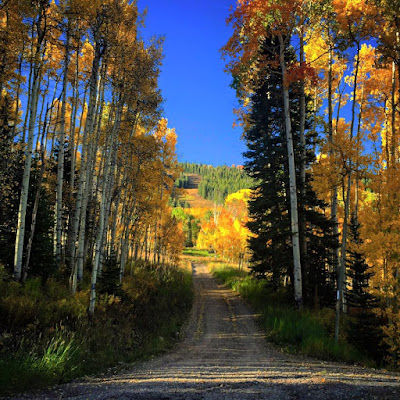 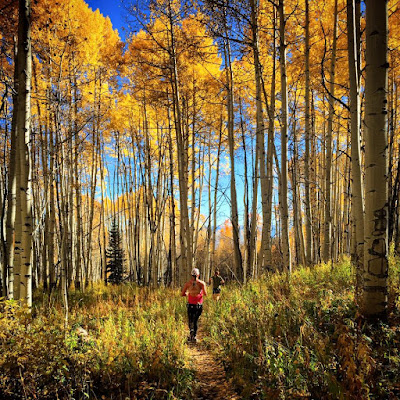 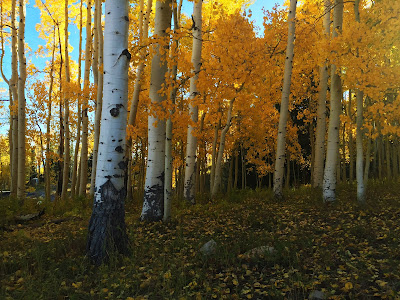 A little after Mile 10, the course leaves the mountains and you run on pavement for a short section, including over the coolest bridge I've ever been on. I seriously didn't even know this was in Aspen - it's pretty amazing: 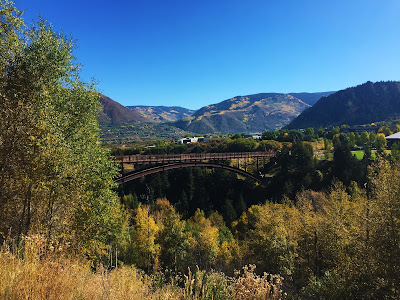 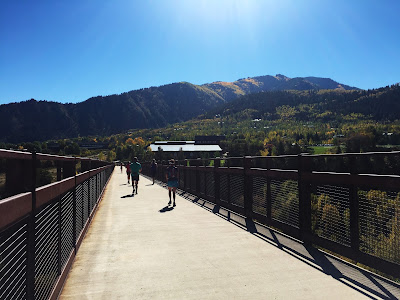 Once we made it over the bridge, we got back onto a trail within the town of Aspen, but it was very exposed and hot. We continued on that until making it into town where we got onto a local bike path that led to the finish. My Garmin was off from about Mile 6, and so I wasn't sure when the finish would be, but was happy to see the 13 mile marker (when my Garmin was only at about 12 - not sure what that was about - however this was my first trail race all year and I forgot how much they wear you out - so I was more than happy with a short course). Unfortunately their mile marker was off or something because I started sprinting when I saw the 13, but the finish didn't come for closer to 1/2 mile! Needless to say, the sprinting didn't last all the way to the finish - but I did FINALLY make it - finishing in 2:35:18 - not too bad for my first trail Half of the year - and especially one in which I stopped several times for pictures - including to take this one which actually WON a photo contest on instagram: 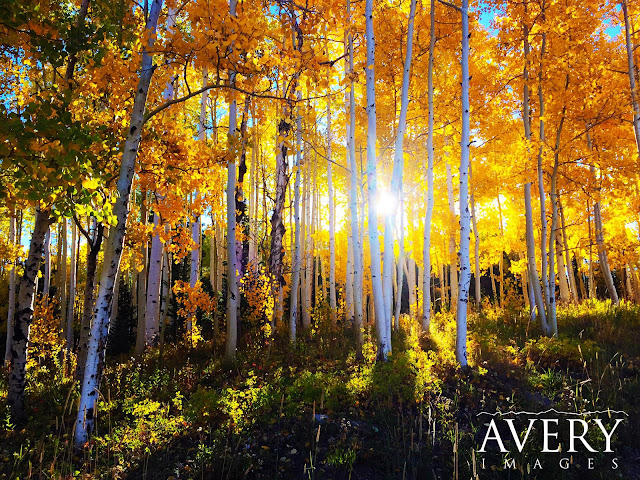 This course was SO beautiful and a perfect way to spend one of the peak fall color weekends in Colorado - so despite there being a few minor things I didn't like, I will definitely do this race again. An added bonus is that this time of year is actually considered the off-season in Aspen and Snowmass, so lodging is very affordable. My only complaints are that I registered for a small t-shirt and they ran out so I had to get a medium (I registered 5 months prior to the race - they shouldn't run out!), and no finisher's medals. I know not every race needs to have finisher's medals, BUT considering the size and price of this one, I feel like they should have them (and they could do some cool medals with a leaf!). The amount of aid stations was great. The wave system worked nicely - I will definitely sign up for a slower wave if I do it again though. Not sure what was up with the course length - some people said it measured long, but according to my watch it measured significantly short - so maybe it was just my Garmin. They had a raffle after the race which, despite not winning anything, had some AWESOME prizes and tons of them!

Overall this race is VERY scenic and a perfect representation of the Colorado high country in the fall! Definitely worth it and I could see it as a great race for out-of-towners looking to see Colorado (be prepared though - it is a true mountain trail race and relatively difficult!).

Since I was in Aspen during the height of the fall colors, I just HAD to go see the Maroon Bells. For those of you who don't know, the Maroon Bells are possibly the most photographed mountains in the continental United States (not sure if they're #1, but definitely up there!). I've been there a few times now, but never during the fall. The only issue is that there isn't much parking, so they require you to take a bus during peak hours. Since I wanted to bring all of my photography equipment, I didn't want to take the bus, so I got up super early on Sunday morning and headed in before the time cut-off. Unfortunately, a lot of people had the same idea and despite making it with 45 minutes to spare, they had already closed the road and I was forced to take the bus! Ah oh well - at least I still got to go (and seriously - if you do this race - I HIGHLY recommend taking the time to go check out the Maroon Bells - it is SO worth it, and in all honesty taking the shuttle really isn't a big deal)!

After that set-back, I finally made it to the Bells at about 8:00am. The sun hadn't made it's way over the surrounding mountains yet, so in order to warm-up and pass the time waiting for better lighting, I decided to hike to Crater Lake (about 4 miles R.T.). Overall I ended up spending about 3 hours wandering around the Maroon Bells and managed to get these shots: 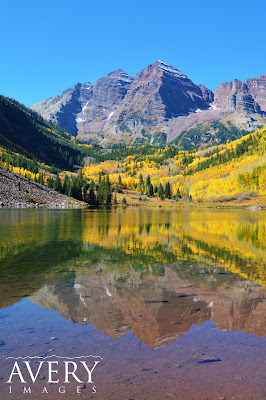 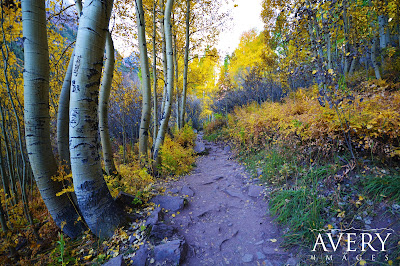 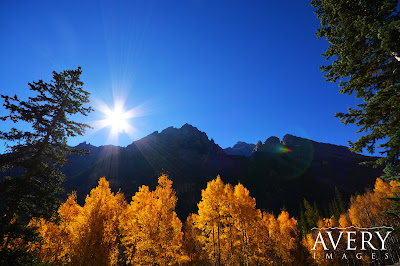 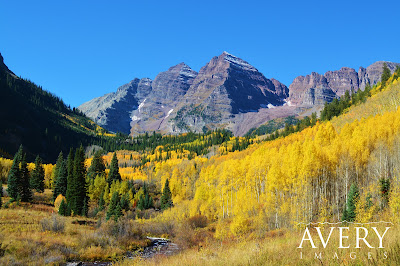 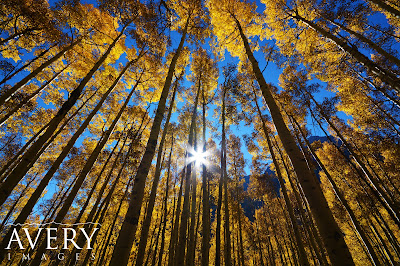 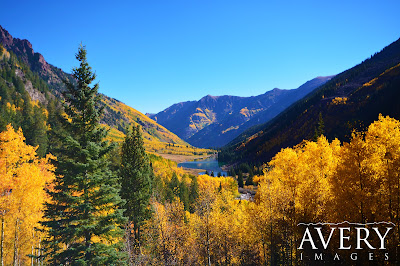 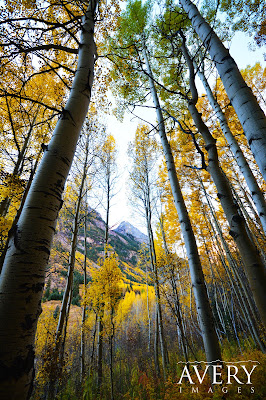 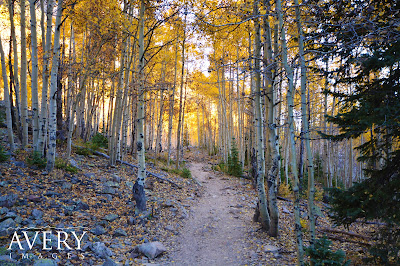 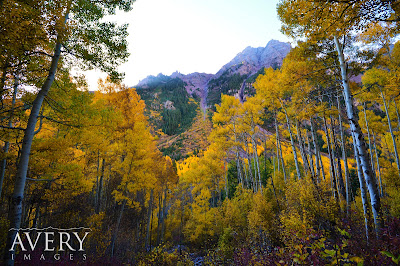 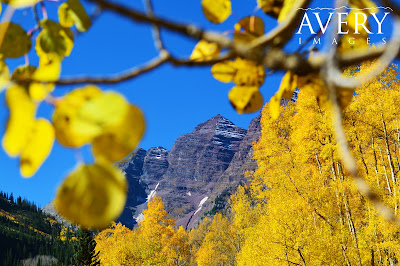 So that's it! It truly was a spectacular weekend to be in Aspen! If anyone is interested, my pictures are for sale at www.averyimages.org!