Yesterday I ran my 13th Marathon (16 if you count ultra's) at the Williams Route 66 Marathon in Tulsa, Oklahoma. I signed up for this one at the end of last year after hearing it was a great race for Marathon Maniacs (a club for people who run a lot of marathons - you have to qualify by running multiples within specific time frames - I qualified by running 3 in 90 days last year, and then "leveled up" to the second level by running 8-11 marathons in 365 days). It also worked out nicely because it's the Sunday prior to Thanksgiving - and since I have family in Oklahoma, I decided to make a trip of it - run the race and then stay for Thanksgiving week. The only real issue I faced was finding plane tickets - I prefer to fly directly out of Grand Junction during the winter (since getting to Denver is much trickier in the winter months due to unpredictable weather), however flights were just outrageous, so I bought Tickets out of Denver from Southwest...and hoped for the best.

Unfortunately, my hoping didn't really pan out. The forecast for Friday in the mountains was for 7 inches of snow from Vail to Loveland. My biggest fear was I-70 getting closed, so I made a last minute decision to leave Thursday night instead. As stressful as it was to pack in 30 minutes so I could hit the road at a decent hour, at least the drive was good (mostly just a bit wet in places), and the bonus perk was having the entire day Friday to do whatever I wanted before our flight left on Friday night. So I ended up spending the day leisurely exploring the Boulder area before our flight left that night: 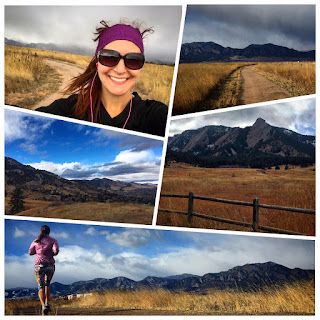 After two hours of delays, we finally made it into Oklahoma City late on Friday night. We headed to Tulsa on Saturday afternoon, hitting the expo and packet pick-up at about 4pm. After walking around the expo for a bit, we headed to our hotel out near the airport, then finally to dinner at Red Robin, followed by a trip to Walmart so I could get some cheap toss-able sweats (a lifesaver considering how chilly it was waiting for the start). Then it was time for bed.


The next morning I got up just before 6 (SO late compared to most marathons - it was NICE!), quickly got ready, grabbed a bagel and coffee from the hotel, then my mom and I hit the road so she could drop me off at the start line at about 6:45. She was able to drop me right across the street from "Maniac Corner" - the special VIP area of the race start just for Maniacs or Half Fanatics (same club, but for Half Marathoners - I actually just joined this a month or so ago so that I could become a "Double Agent"). The VIP area had it's own separate bag check, port-a-potties, a tent area (to somewhat provide warmth - although it was still COLD), and then we all did a group picture at about 7:20.


I headed over to my starting corral at about 7:45 and got ready for the 8:00 start. I waited until the last possible minute to shed my sweatpants, and opted to keep my sweatshirt on for the time being. The wheelchair races were off at 7:58, and then it was our turn. They shot off a bunch of confetti with the start of the gun which was pretty awesome (and it kept going long after I had gone through) and fit with the "party" atmosphere that would continue through much of the race. 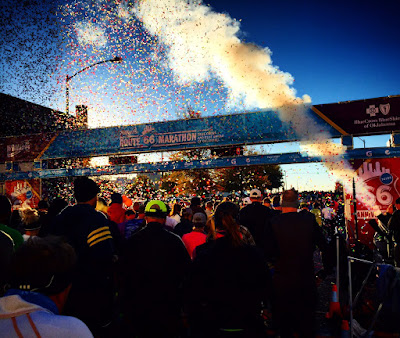 The first few miles went okay - my feet were frozen from standing around for so long, and it took several miles until I could feel them again! I ended up shedding my sweatshirt at about 1 1/2 miles, but still had another light long sleeve that I kept on until about Mile 6 (I didn't want a repeat of Rim Rock where I dropped everything too early and regretted it). Honestly the first 8 or so miles went well, but mentally just felt LONG. I was a little worried about how I was going to go for 26.5 miles at this point (yes I said .5 - they have an optional Center of the Universe detour, adding .3 miles to the race, making it the "World's Shortest Ultra"). But luckily, starting at around mile 9 things got a little more interesting (don't get me wrong - the first 8 were through really pretty neighborhoods that still had a bunch of fall color - I enjoyed it - it was just mentally I wasn't in it yet or something).


So what happened to make it more exciting? Well for starters at Mile 9 was one of the best "un-official" aid stations (this one vs. the Mile 22 one are up in the air - they were both awesome) - a group of spectators had beer, shots (not sure of what), and then jello-shots! I was a little hesitant at first since I was only 9 miles in (that's 17 1/2 miles still to go!) but I just decided, why not? I'm clearly not going for a PR (I'm not in shape for that right now - and even if I was, it was an INSANELY hilly course), so I had some beer!


I contemplated the jello-shot, but ultimately decided against it (the 17.5 miles to-go being the reason - had I been past the 20 mile mark, I totally would have). After that, things just seemed to go faster. At about Mile 11, I saw a guy wearing a Runners Roost Race Team Singlet (P.S. I got onto the Runner's Roost 2016 Road Race Team!!! Pretty excited about it - I've been applying for the past 3 years) so I struck up a conversation with him about it and then we got to chatting about various Colorado races for awhile. We stuck together until about Mile 13 or 14 which helped those miles pass by immensely! 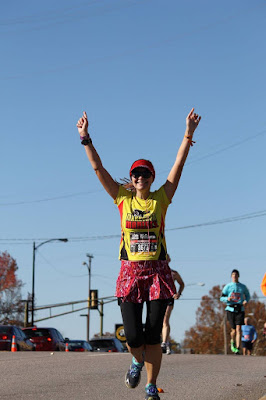 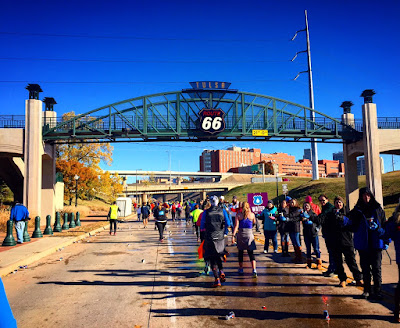 The Half Marathoners and Full Marathoners start together and split off at about 12.5. This was similar to the Denver Rock-n-Roll Marathon in 2014 - which I hated at the time, and so was a little worried about this. That race I really struggled with the transition from huge crowds to extremely small crowds post-split. But I decided I didn't mind it that much during this race - I actually found it much easier to start up conversations with people once the crowds has dispersed - and chatting always makes the miles go by more quickly! 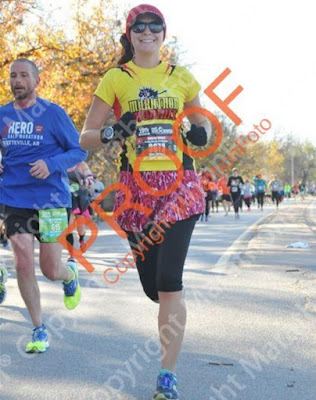 Once I lost the Runner's Roost guy (I believe his name was Joel - I'll probably find out when I officially start the team in 2016), I continued on for a bit by myself before striking up a conversation with another Marathon Maniac from Indiana for a mile or so. Then I was back to running by myself for bit until around 20 when I met Ron - another Maniac (I told you this was a big race for Maniacs!). We ran together until right around Mile 22 - when we hit the other awesome "unofficial" aid station. They had Guiness, Mimosa's, Gummy Bears, Pretzels, Oranges, and Pickles! It was pretty AMAZING. I toasted my mimosa with this awesome lady, then had a pickle (I know it sounds weird - but they actually taste really good in races - it's the sodium I think - it's such a nice change from all the sweet stuff), and finally grabbed some gummy bears as I continued on (although it was one of my slowest miles of the day at 12-something). 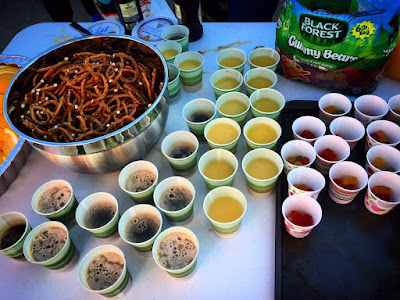 Only about 1/2 mile or so later there were some more people with Beer, so I had a quick sip, and kept at it. Meanwhile, the hills just kept coming (I was getting a little tired of them by this point). Just before Mile 24 we turned onto a section that was an out-and-back - although when I was on my way "out" I didn't see anyone coming "back" yet so I got super confused on whether we were on the part of the course that was the "out" or the "back". Ron ended up catching up with me again on this section and confirmed when I had eventually determined - that we were on the "back" section. I also saw a fellow Skirt Sports Ambassador Cheryl on this section - so I said Hi as we passed (although - I wish I had thought to snap a quick picture - but I didn't think about it until it was too late to go back)!


Meanwhile Ron and I got back to chatting for a bit about different races etc. Then before we knew it, it was TIME! For the detour. I had been waiting for this all day (especailly after seeing how cool the coin was at the expo the day before). We turned right for the short out-and-back section. It required going up a big hill, past the actual Center of the Universe, then down a hill where Michelob Ultra was giving out Beer (this is a great race if you like beer BTW). Naturally, I had to have some and I got a picture with the Beer Keg and Ron, and then we headed back to the course, stopping for a picture "on" the Center of the Universe. From here, it was just about a mile left to the finish. We kept at it, kicking it into high gear once we could see the finisher's shoot. My mom and sister were watching from the finisher's shoot so I waved at them and then sprinted to the finish, finishing in 4:17:18 - not my fastest, but also not my slowest, and considering the amount of chatting, drinking, ultra-marathoning, and pictures being taken, it's not too shabby!

The race had Spaghetti and various small treats for finishers. I had a little bit, and then went to find my mom and sister before going in Maniac Corner to get my drop bag, switch my finisher's medal from the regular medal to the special "Maniac" medal. They also had a separate beer area and pulled pork sandwiches just for Maniacs which was awesome (and way better than the spaghetti). I had part of a sandwich and beer before we took off and headed back home!