I've participated in some sort of Turkey Trot every year since I started running. It's become my new tradition in a way, so when I knew I was going to be in Oklahoma for Thanksgiving this year, I decided I had to find one there as well. Being a larger city, they had several options, but with help from an online running friend, I decided on the OKC Turkey Tracks 5K in downtown Oklahoma City, and was not disappointed (aside from the uphill against the wind section during Mile 3...).

As I've mentioned in about EVERY post since mid-fall (I know it's probably getting annoying), I knew I wasn't in "racing shape," and so didn't really know how this would go. I was HOPING, especially given that I was at 1000' elevation (as opposed to 4500' where I live), for Sub-24:00. That would be a 7:44 pace for those who can't do math in your head (like myself). My comfortable, no worries, no sweat (well maybe a little sweat) pace is about a 9:30-10:00. So 7:44 is stretching it a little, especially when I haven't been pushing my pace AT ALL lately... so I gave myself a B Goal of running a sub-8:00 average pace.

The weather leading up to the race was questionable at best. The forecast called for rain all day on Thanksgiving - although LUCKILY the temperatures were going to stay warm for the first half of the day. When we arrived downtown it was 60 degrees and drizzling with a bit of wind. We were pretty thankful we had opted for the downtown race given the wind (the other one we looked at was at Lake Hefner - which would've been VERY windy). At least the buildings would hopefully block some of the wind for us!

The race starts downtown at the Oklahoma City bombing memorial site, so my dad and I walked through the memorial while we waited. After that, I saw Jennifer - who I only knew from social media (I started following her on Instagram at the Walt Disney World Marathon in 2014) - so we met up and got a picture! It's always fun to meet online running friends - everyone is always so nice!


Finally, it was just about time to line up. This was by-far the biggest 5K I'd ever ran, and I knew I wanted to "race" it, so I opted to start pretty close to the front - where I snapped this picture looking at the crowds behind me: 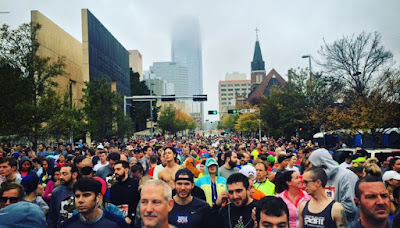 Then pretty soon, the gun went off, and we were off! It was a lollipop course (and out-and-back with a loop connecting the beginning out from the end back), and the very beginning was slightly uphill. I knew this would be nice for the way-back! Unfortunately, about 1/2 mile in, once we turned to start the "loop" portion, it was all downhill - this would mean it was "up" on the way back! But - not much I could do about it, so I took advantage of the downhill as much as I could and ran my first mile the fastest in 7:38.

Mile 2 was slower, but not terrible in 7:44, but I could tell I wasn't going to be able to keep this up, especially since I knew I was going to have to make up for that downhill soon. Sure enough, the uphill came right into the first part of Mile 3...and of course, not only was it uphill, but we were also running against the wind. I tried my best to keep my pace up, but I knew the sub-24:00 wasn't happening. Finally with 1/2 mile to go, it was back to downhill and I managed an 8:17 third mile, picking up the pace as best as I could for the last .1, and finishing in a time of 24:33.

Not my A-goal, but managed my B-goal with an average pace of 7:55. Much to my surprise, this was also good enough for second in my age group, although they weren't actually giving out any awards to age group winners (which I actually decided was probably for the best, since I wouldn't have wanted to wait around for awards anyways - not only was it raining, but I wanted to get back to helping out with thanksgiving dinner).

So - overall this was a good race for me to get a feel for where I'm at right now. I have a lot of work to do to get back into marathon racing shape (aka "operation BQ"), but I know with hard work and commitment, I can get there!