Well my 2015 racing season is officially over. I ended it by running the Winter Sun 10K for the third year in a row. With all the speedwork I did in the first half of the year, I wanted to try and PR this race (it's a FAST course, making it great for a 10K PR), but unfortunately with the time I took off over the fall, it didn't happen. That being said, I did still manage a pretty good performance for myself and FINALLY managed to get myself on a podium (my first podium!!), so I'm overall happy with how this race went and intend to keep running it (plus I want to go for the Moab Half Marathon Series Triple Crown next year!).

Since we have such a large group of from Grand Junction that go every year, several runners decided to organize a bus to take a bunch of us down this year, and I was lucky enough to get in on the action. As soon as the idea was born, it quickly evolved into a "party bus" complete with goodie bags: 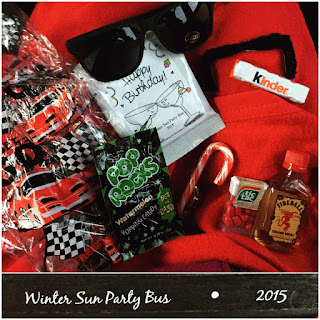 Needless to say, we rolled up in style. No seriously, we even got permission to have our specific bus take us directly to the start (and park there, so we could stay on the bus as long as we wanted before having to get off - unlike when you take their shuttles). It was pretty sweet.


The weather was very tricky to dress for. I believe it was low 30's for the race but very sunny out (actually this was the first "Winter Sun" race that I'd actually seen sun at - last years race was overcast, and the year before was snowing!). So after much deliberation, I decided on a skirt and long sleeve shirt. However, at the very last minute, post warm-up (thankfully I did one), I took off the long sleeve and went in just the tank top I had one underneath.... Yes a tank top and skirt in 30 degree weather. But the sun really was nice and since I knew I was going to be racing this as fast as I could, I was okay with it.


As I mentioned before, this is a FAST course. So I started out at a hard pace, and just did my best to hang on for the remainder of the race. Overall this was a pretty good strategy, especially since I knew when to expect the hills - there are a few small ones in the first 2 miles, and then a BIG one right after Mile 2. I always get passed by people on this, but can usually catch back up once I get over the hill and have a chance to recover.


After you get over the big hill, it is a really nice gentle downhill until the very end. I managed to keep a decent pace (with the exception of the Mile 3 hill, which resulted in my slowest mile) until the last mile when I definitely started to struggle. The race ends with a lap around the high school track, so I told myself I just had to make it to the track and then sprint it in. Unfortunately, I was dying by the time I got to the track, so I managed to sprint for about 10 seconds as I rounded the first curve, and then I was back to just running. However, I still managed to finish in 48:13 - my second fastest 10K time!

They didn't post the results anywhere, and since the competition for this race has always been very tough in previous years (my 46:29 from last year left me in 5th place) I wasn't expecting to place. Therefore I was pleasantly surprised when I got called up for 3rd place in my age group (women 20-29)! This was my first race I've placed at that had an ACTUAL podium, so I was pretty excited! 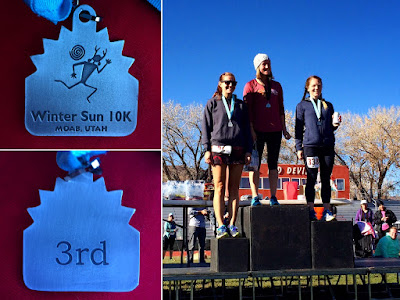 
Our group stuck around for the awards and raffle, then went to lunch at the Moab Brewery before having one big Fireball Toast as we headed back home. 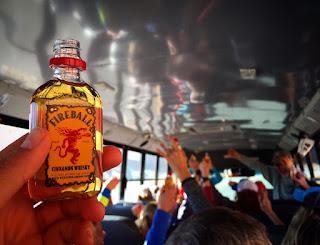