As I have mentioned several times, I'm running Pikes Peak Marathon (PPM) in August. Pikes Peak Marathon is the full distance of a marathon with the first half being the ascent via Barr Trail, from Manitou Springs (elev. 6,300') up to Pikes Peak (elev. 14,110), followed by the descent for the second half. Since this is probably going to be my toughest race yet, it is my main "Goal Race" for the summer season. Meaning all the other races and training I'm doing is all leading me towards a hopefully successful PPM. Since it's my goal race, I knew I wanted to make a trip over to Colorado Springs sometime this summer to run part of the course and get a better feel for what I'm getting myself into come August 17th.

I decided the weekend of July 4th would work well since it is quite a bit of a drive and I had three days off. I had been following a girl on Instagram - Kellee, who lived in Colorado Springs, and when I mentioned I had wanted to go do a training run, she was up for doing one together! That made things a little less stressful, since she was local and knew more of the trail than me (and I knew nothing at this point)! I also actually ended up staying at her house for Thursday and Friday night, which worked out well for me (and hopefully I didn't impose too much!!!).

I got off work at 3:00 on Thursday afternoon and made the drive towards Colorado Springs. I decided to go south through the mountains rather than to Denver and then south. Unfortunately when I got off of I-70 and started heading towards Breckenridge, I hit a TON of traffic. However with it being a holiday weekend, I'm sure I would've hit traffic any which way I went. Luckily once I got through Breckenridge it let up a bit (but it took 30 minutes to go from Frisco to Breck - which is only 9 miles!). Once I past Breckenridge I continued southeast until reaching Fairplay/South Park, and then got onto Highway 24 which I took the rest of the way to Colorado Springs, making it there around 9:00 (boo - 6 hours!!).

I stopped by Walmart to grab some bagels for breakfast the next morning (my typical pre-long-run fuel), then found Kellee's house, where we met for the first time - and luckily she was very nice and not a creeper...(not that I ever expected her to be...but you never know when meeting someone online, haha). We quickly got to chatting about everything running related, as well as a little planning of what the next day would entail. The plan was to do almost the entire ascent (by "almost" - I just mean that we started about 1/2 mile up the road from where the actual start will be), starting at 5:00am. This meant getting up at 4am, leaving around 4:40! Ahh...the life of marathon runners...getting up early on a holiday is never fun, but I knew we needed to start that early - you never know what kind of weather you will run into on a 14er (and of course, I never regret it once I get started!).

We drove in Manitou Springs and parked at one of Kellee's friend's houses and quickly got started. We were on a paved road (I think Ruxton) for about a 1/2 mile or so until getting onto Barr Trail for the first time! The trail was immediately uphill (well so was the road actually), but that was to be expected. After all we had 7800' of climbing to do in 13 miles! The first section of the trail consists of a lot of switch backs with constant uphill, referred to as the "W's". The trail itself was less technical than I expected, which will be good for my tired legs when I'm 24ish miles in the marathon!


At the top of the W's (about mile 2.5, I think), is where The Manitou Incline meets up with the trail. The Incline is not part of the PPM course, but more of a training tool for a lot of local runners. I'll get more into this later in the post, as I did it the following day! Once you pass where the incline joins the trail, you keep going up for awhile until around mile 4.5 when the course flattens out slightly, for about a mile and half. I may try to run parts of this section on race day, depending on how I'm feeling (in case you're wondering - despite it being called a "marathon", most normal folk, like me, will be hiking the majority of the uphill, followed by running the downhill - the time cut-off for this race is 10 hours - almost double that of most traditional road marathons).


Barr Camp comes at mile 7.6 in the race (so we probably got there around mile 7ish), which is just another landmark to know where you're at on the course (well and you can camp there and I think get dropped off by the Cog railway). You're about 10,200' in elevation at this point, with 5 1/2 miles to go. 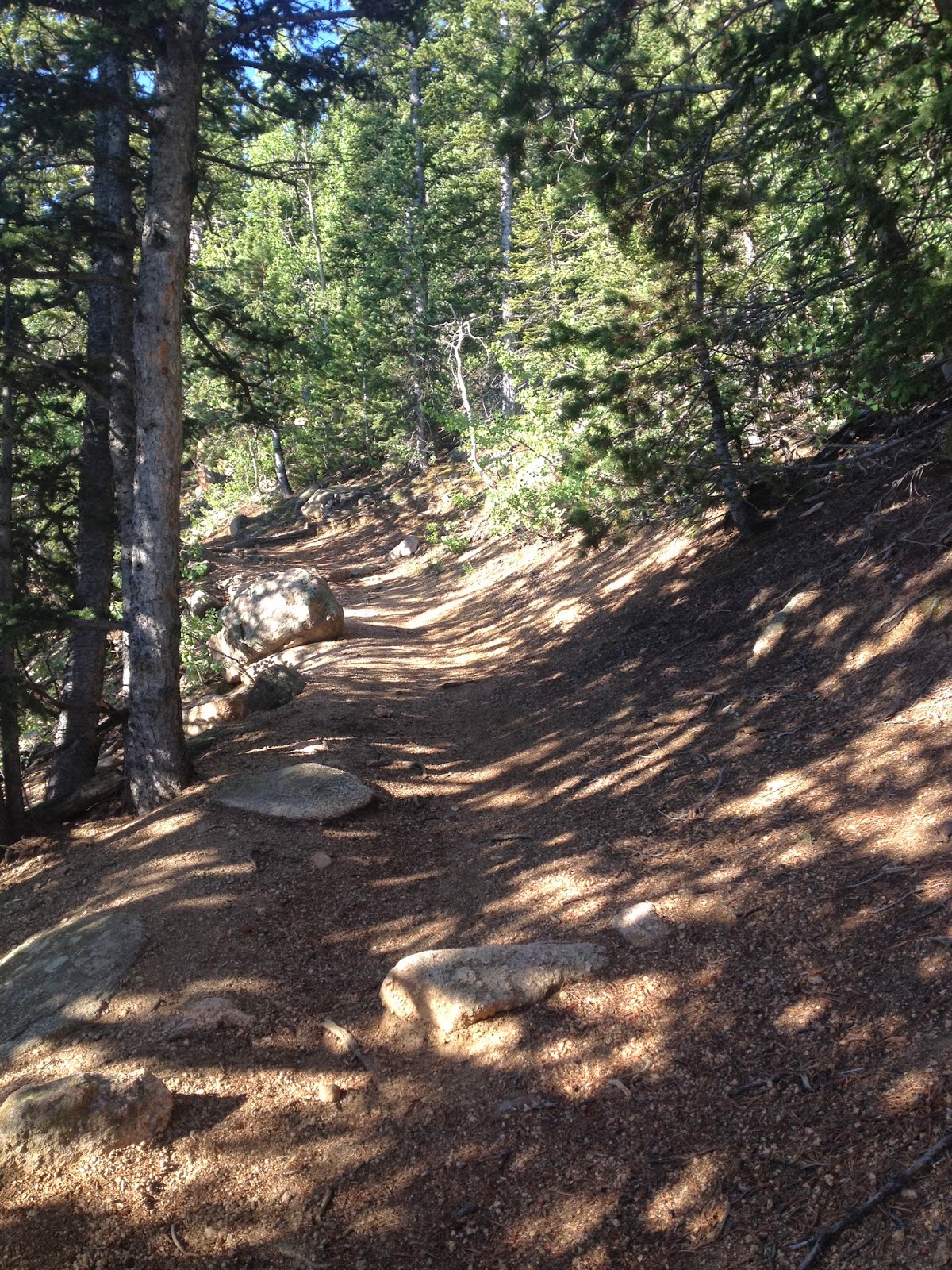 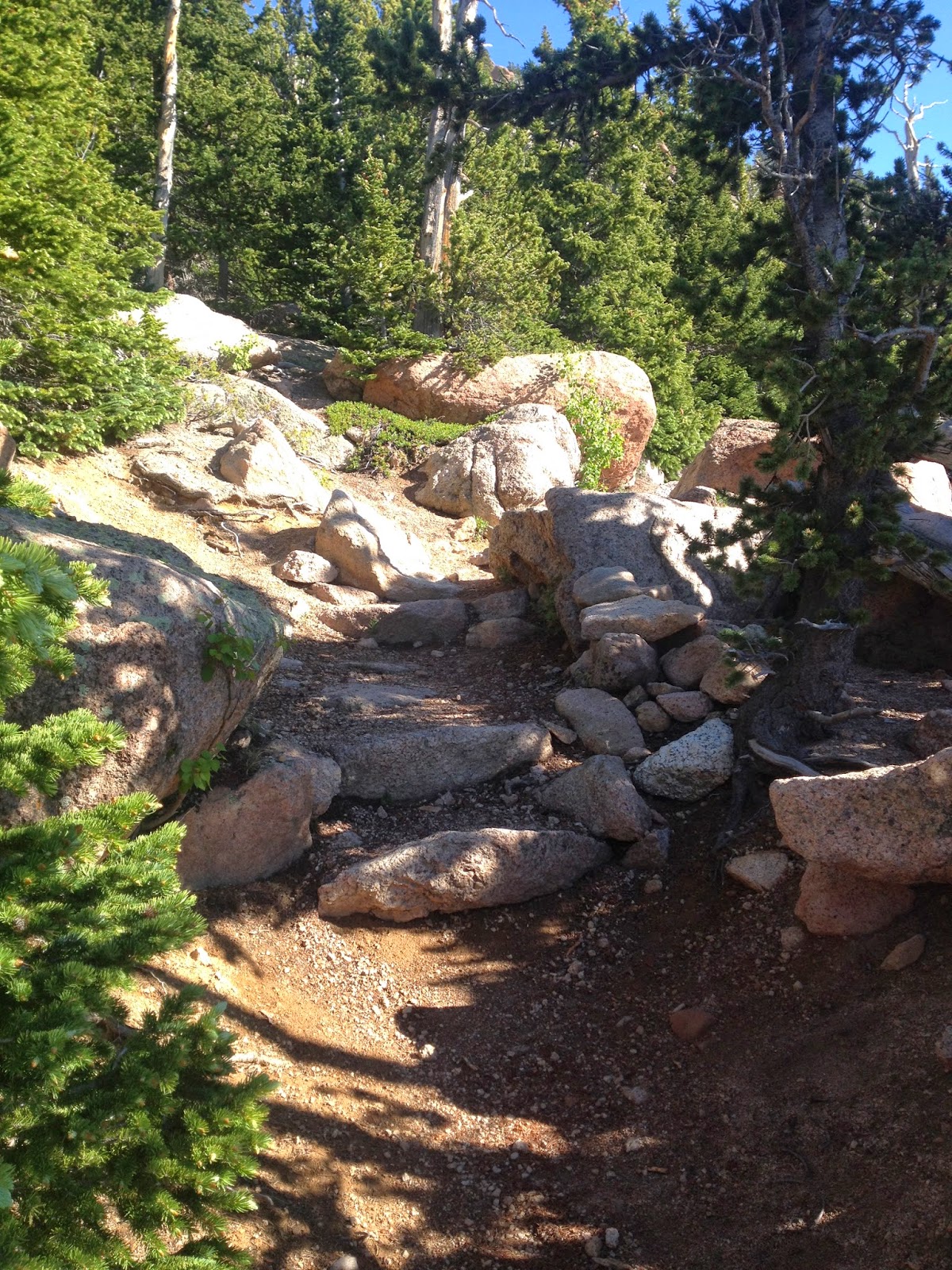 The next landmark is the A-frame house at 10.2 miles and 11,950'. You're just below treeline and you've got 3 miles and over 2000' feet of elevation gain left. This serves as a marker that the climbling is going to start getting tough (mainly just because of the altitude in my opinion, but it also gets a little steeper and a little more technical from here on out).

I took a TON of pictures over the last three miles - one reason being that the views were so pretty, but also I think just because I was moving a lot slower and taking more breaks! Once I get above treeline is where I personally start to feel the effects of the altitude. So this section was a bit on the slow side, but we kept moving forward. They have signs every mile from here on out to serve as nice markers, and then when you reach the sign for the "16 Golden Stairs" is when you know that you really are just about there. The 16 Golden Stairs are the last set of switch backs until the top - although it is really actually 32 switchbacks! 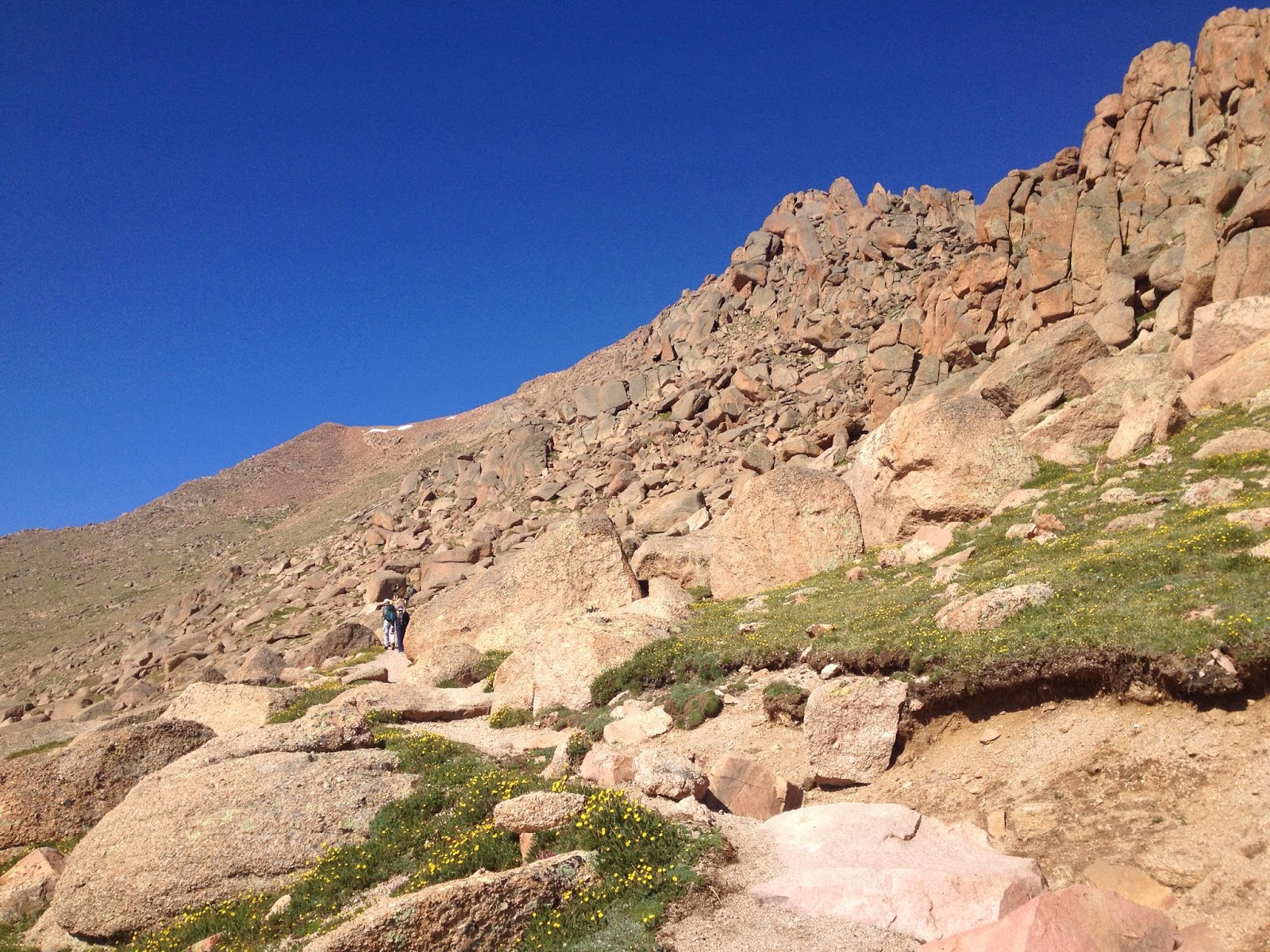 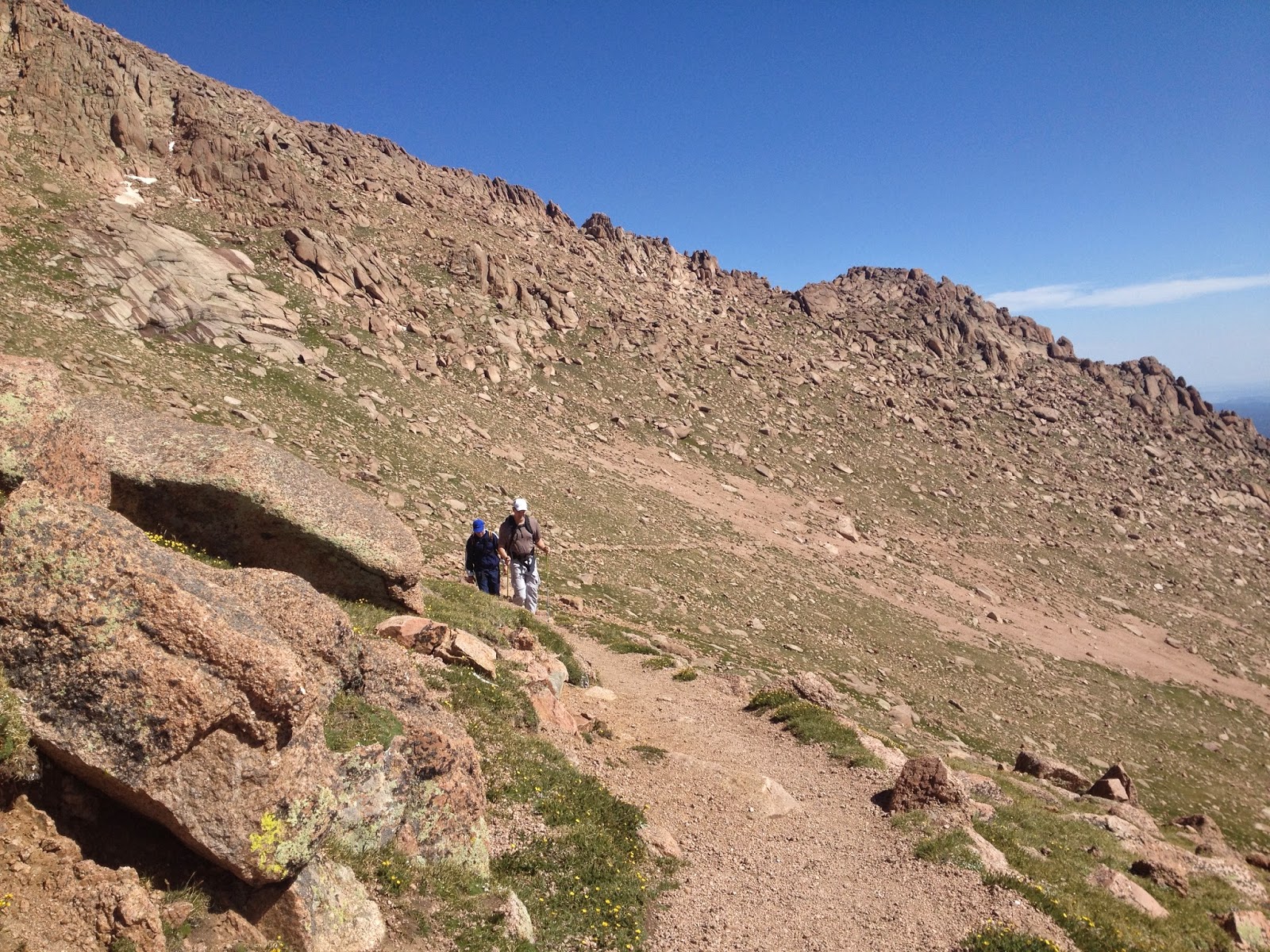 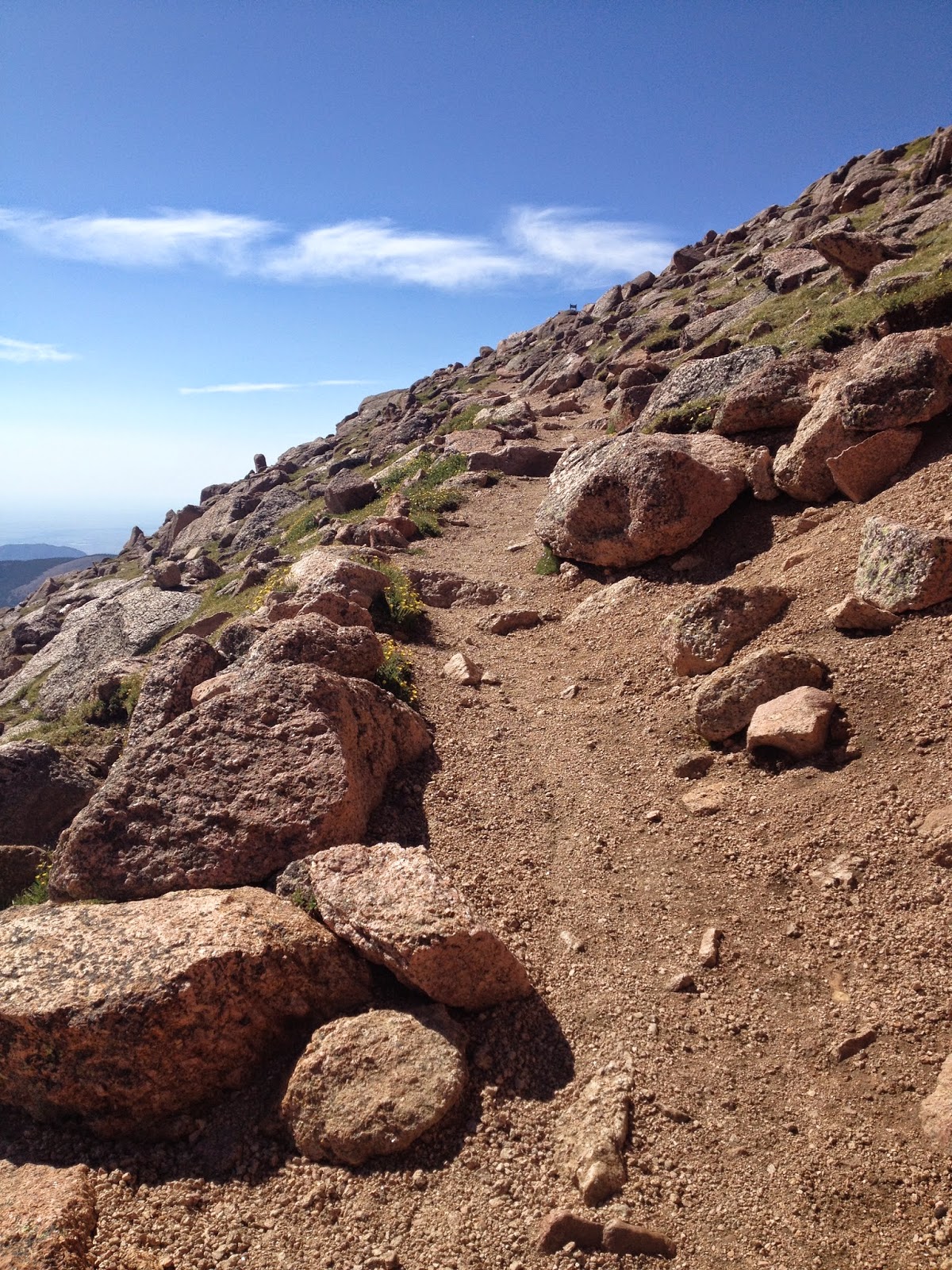 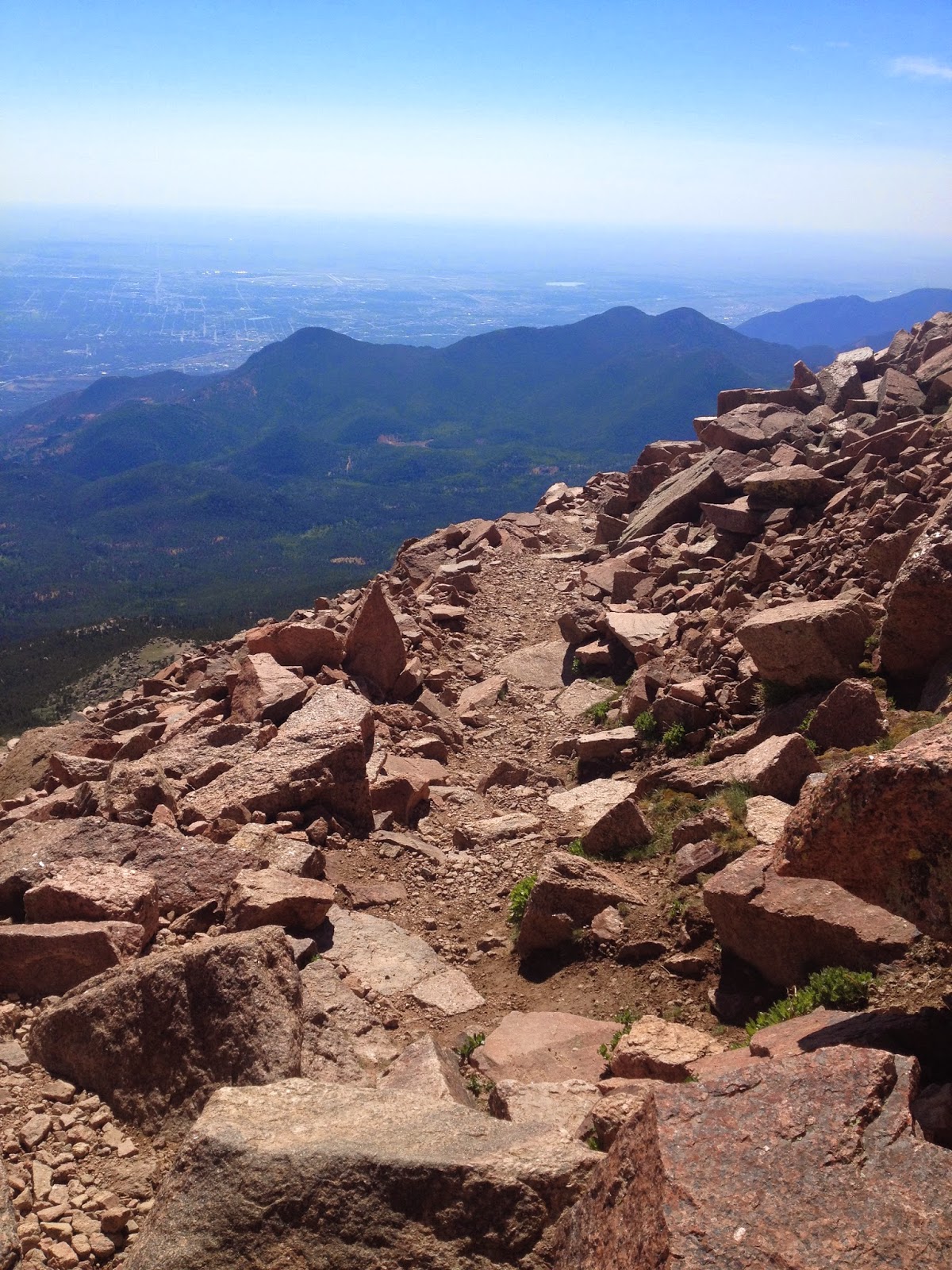 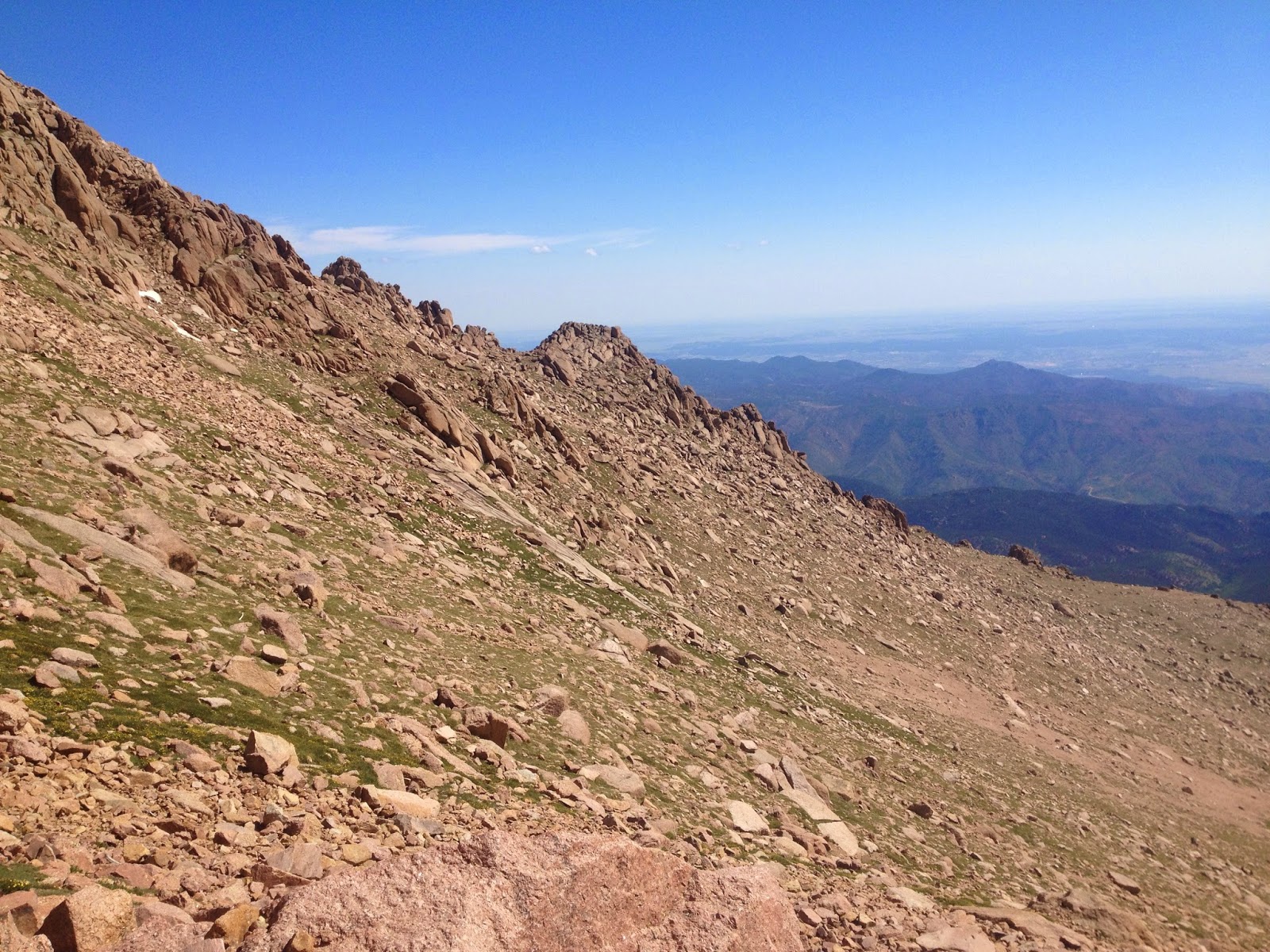 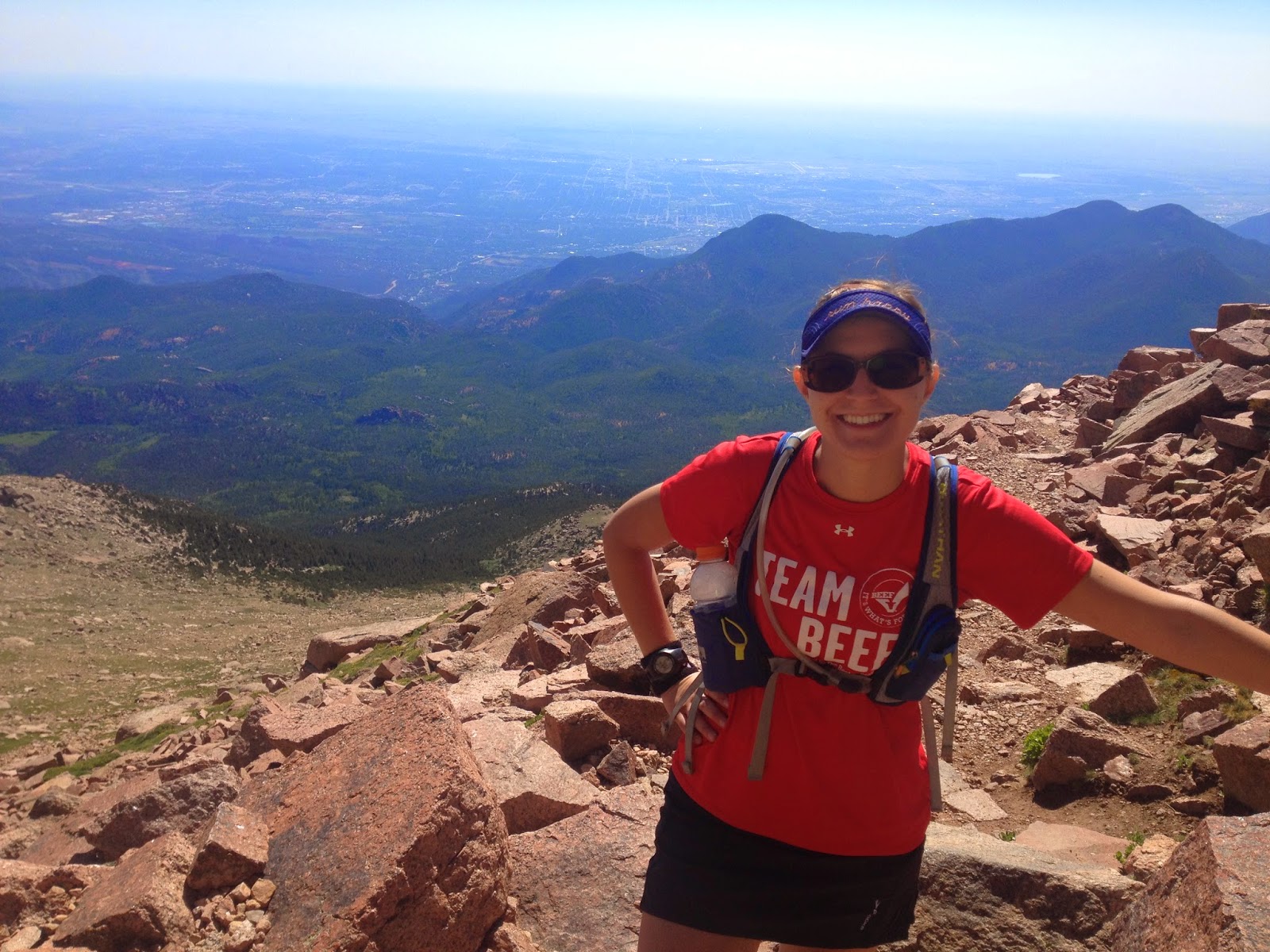 And then finally, after the toughest 3 miles ever (I always say that about the last 3 miles to a summit! Haha), WE MADE IT! And the best part: unlike normal 14ers, Pikes Peak has a store with FOOD! So we got to take a nice recovery break at the top before Kellee's husband picked us up (oh and that's the other benefit - you can get picked up!!).


So, thoughts on the trail and upcoming race:

Overall not as steep or technical as I thought! Now don't get me wrong - this is a TOUGH course, and it will be hard, but just in general, it's more of a constant steady uphill at a manageable grade. The steepest sections of the course are going to the W's at the very beginning and the last 3 miles to the summit.

I'm very glad it's not super technical, because my legs are going to be dead by the time I have to go back down. Granted, I won't be surprised if I still fall a couple of times, despite me talking about how "not-technical" it is. Hopefully it just won't be as much!

No sections of this course were beyond my comfort level. I personally have trouble with narrow, exposed trails (big drop-offs), but I never found myself worried during the 13 miles of this trail (that was a relief - especially since I will have to let people pass).

We ascended in just over 5 hours and I would like to try and reach the summit in under 5 on race day if I can - the main thing I'm worried about is having to move to the side to let the faster runners back down. The top sections are where the trail is the most technical and I know I'm going to have to be letting more and more runners pass, the closer I get to the summit - when I'm starting to get really tired. This could end up serving as nice breaks, or it could be annoying because I can't get into a steady rhythm - who knows. So, I'm just going to hope that it won't be as bad as I'm expecting and just go out and do my thing. What happens, happens. The time limit is 10 hours, so if I go over 5 on the ascent, oh well - theoretically the downhill "should" be faster.

The drive up/down Pikes Peak is pretty cool, I have to say (although not as awesome as hiking it!). Here's one cool picture I got out the car window on the way down: 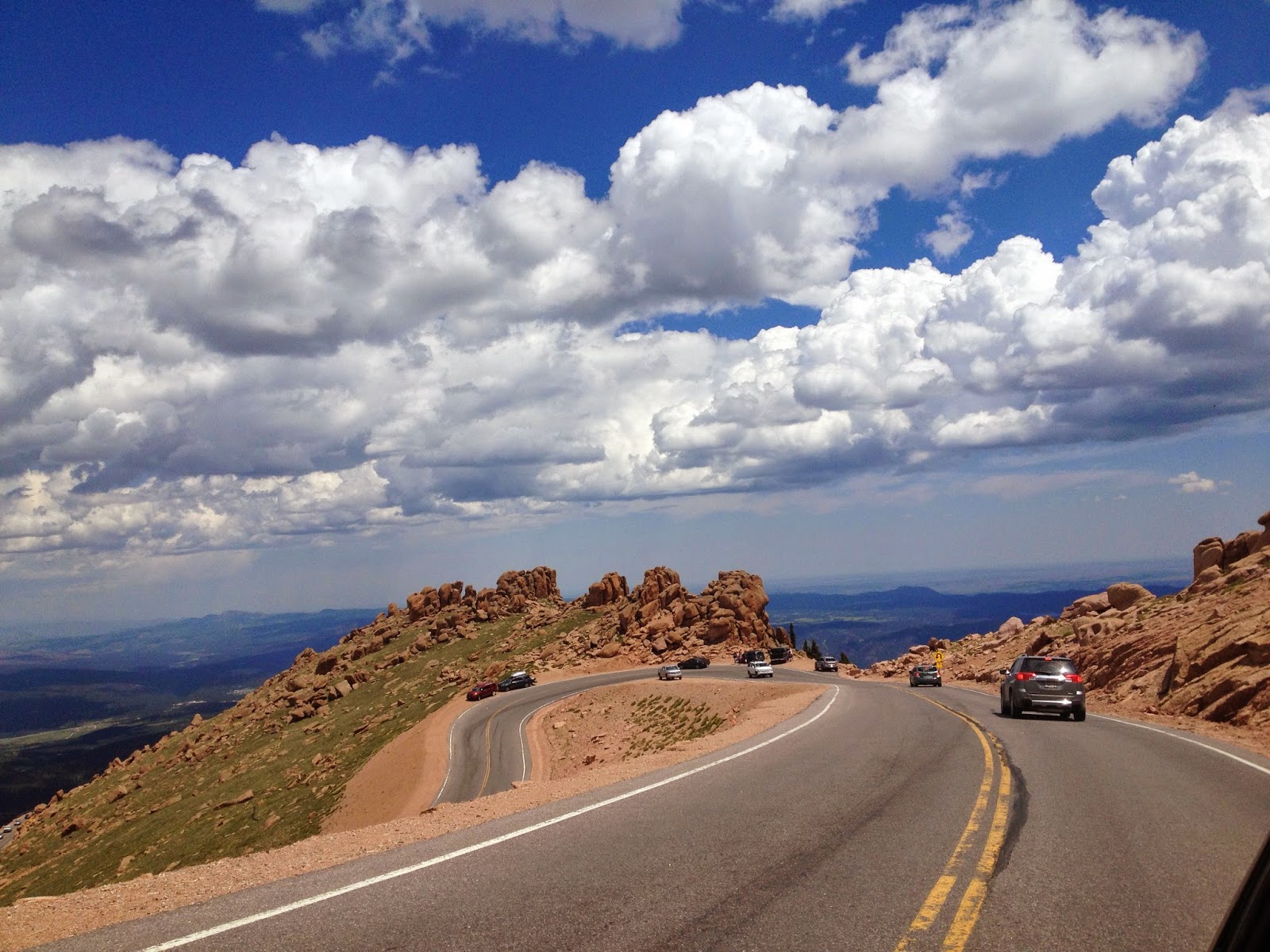 Rest of the weekend:

Ever since I first heard about the Manitou Incline, I knew I had to do it. It looked awful, also an awesome challenge. The Manitou Incline is .88 miles, 2000' up, 68% grade, and 2,744 Steps, up Mt. Manitou. It used to be part of a railroad I think, but is now just used for recreation. Since I had the three day weekend, I decided to stay in Colorado Springs another night and do the Incline in the morning, and then from the top of the incline, run down the Barr Trail - this would also give me the added bonus of some downhill mileage on the course. I didn't get quite as early of a start as I wanted, and so it was HOT, but I still managed to do the incline in about 47 minutes. And just as I guessed it would be, it was TOUGH! I was hoping to just keep at it, slow and steady, but even with that I had to take a few breaks! Overall though, I did manage to pass most people on the trail - so that felt good (although I'm sure most of them were tourists, not from this kind of altitude). After finally, getting to the top, I took a quick break and headed back down! It made for a nice 4 mile training run!


Once I got back Kellee and I went into Garden of the God's for a short hike as well. I hadn't ever been there yet, so was excited to see it! It is almost like a mini "Moab", right in the middle of Colorado Springs! Weird, but pretty!
After Garden of the God's I headed to Denver to catch up with some friends and then headed home Sunday morning. Overall it was a great weekend, and I am really glad I got to spend some time on the Barr Trail! It definitely has eased my nerves a little for the race (although definitely not completely)! And many thanks to Kellee for letting me stay at her house over the weekend! I really appreciated it!