After realizing I had run 11 races so far in 2013, I knew I had to find one last race for the year to make it an even 12 (and average of 1 per month). So I signed up for the Moab Winter Sun 10K, on December 7th. It's put on by the same people who put on my first Half Marathon (Canyonlands Half Marathon), so I knew it would be a great race.

I also know a few people who had done it last year and they had great weather. Naturally, because I was expecting good weather again this year, we had anything but! However, considering I've always seemed to have great weather for most of my races, I guess it was about time I experienced racing in sub-par conditions. The high in Moab was supposed to be in the low 20's. Nevertheless, I was still looking forward to it and hoping for a PR (personal record). My current PR was 54:30 - which was actually a split time from Georgetown to Idaho Springs Half Marathon in August. I knew I could run at least that pace, and hopefully a little faster.

I carpooled with another runner from the San Juan Mountain Runner's run club. We left Montrose at the lovely time of 5:30am and made our way to Moab. The roads were pretty good up until we hit the Utah border, and then they were just okay. Not terrible, but not ideal. The left passing lanes were snow covered. Luckily we had left early enough to allow some room for slow driving, and we ended up making it into Moab just barely after 8:30. We got our race packets (which had a really nice long sleeve tech shirt along with a few goodies), and chatted until hopping on the bus around 9:20. The bus took us about 6 miles out of town to the Golf Course, where the race started. They had hot chocolate and fire pits to help keep runners warm (which was a life saver!).

At this point is was around 18 degrees and absolutely no sun at all (so much for being called the "Winter Sun 10K"). I took my gloves off for a few minutes to snap a couple of pictures, and they about froze off. I couldn't stop shivering after that, so I had some hot chocolate and squeezed my way near one of the fire pits to warm up.

Finally, it was almost time to start, so we all lined up near the starting line (although, not close enough in my opinion - it was so cold I could've used the body heat). The gun went off, and we were off! Because of the cold, I knew I needed to warm up a little before I picked up my pace, so I just started off nice and easy. I think it did take the whole first mile before I warmed up enough to feel comfortable (or slightly comfortable I should say). The first few miles were actually a little more hilly than I was expecting as well. I had heard a lot of people say this was a fast course, so I expected it to all be downhill. But overall I seemed to be keeping an okay pace.

Into the second mile I started picking it up and passing people. And then the third mile hit. For the first 1/4 mile it was a fairly steep uphill, so I lost some ground, but managed to keep running. Once I was over that hill though I picked it back up and continued on at around a low 8-minute mile. I definitely felt pretty good, especially as I continued to pass people.

For the last couple miles, it was all downhill (for real this time), which was great. I kept my pace up, and with a mile to go, knew I was going to get my PR! The last 1/4 mile of the race is actually on the high school track, so when I reached it, I told myself I was just doing speed work and went into an all-out-sprint. I passed 2 or 3 people and finished in a time of 51:25 -3 whole minutes faster than my PR! Honestly, with the weather, I wasn't sure what to expect, so I was pretty happy with this time! It was a great race and a great way to finish off my 2013 racing season!

By the end of the race it was snowing pretty badly (the snow started at the beginning of the race and just kept on coming the entire time), so I quickly snapped a few pictures, grabbed my gear bag and headed into the high school gym where they had the post-race snacks, awards, and raffle.

Unfortunately I didn't win anything in the raffle, but overall this was a great race. Other then the fact that the distance was a lot shorter, I felt like this race was a better bang for your buck then the Half Marathon's they put on. For only $38, you get the bus transportation to the start, a long sleeve tech shirt, and reusable bag with a couple Clif bar products, a photographer (although you do have to pay for the images), and the opportunity to win a lot of great prizes in the raffle. I was a little surprised that it wasn't chip timed, but that definitely isn't a deal breaker for me. 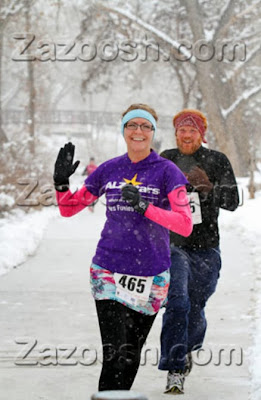 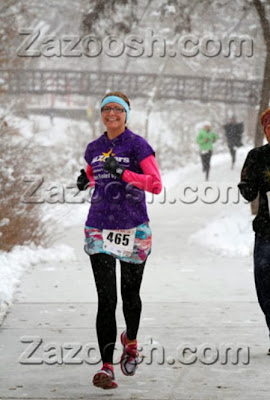 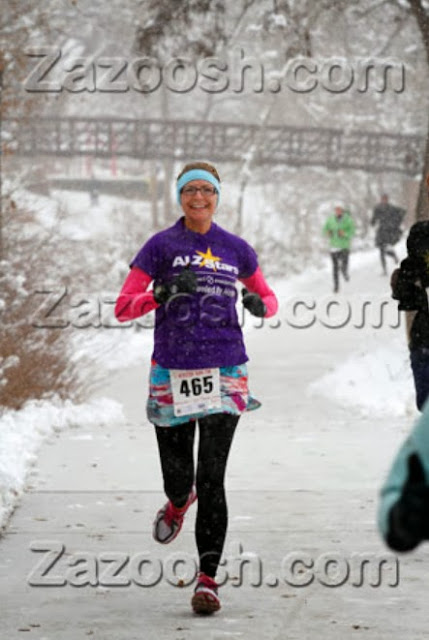 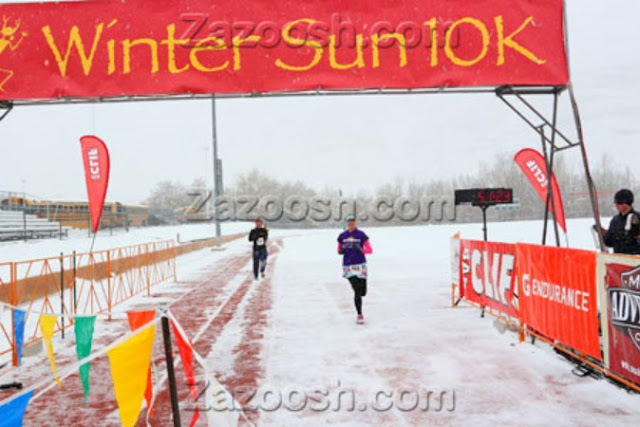