I've been so bad about blogging lately...but here I finally am, covering the past 5 weeks all in one post.

For starters, choosing a winter marathon is proving to be a little more difficult than I was expecting. I thought about the cold weather when signing up for it. What I didn't think about, was the daylight...or lack thereof, I should say.

I am doing my best to get into the habit of treadmill running (aka hamster wheel running). It's going okay, but I still refuse to do any long runs on it. 8 miles is my max thus far (and I hope it stays that way!). And let me just say trying to get 8 miles in pre-work is pretty miserable. It means getting up at 4:30am...yuck. 5:00 is early enough!

Other than the cold, early mornings, training has been going pretty well. Had a couple of Nordic adventures and one last race of 2013, which I will briefly touch on below, but my plan is to do a whole blog post about them later (soon hopefully, so I don't get too far behind).

So without further ado, Marathon Training Weeks 9 thru 13 (only 5 to go!):

This week went okay, except I skipped my long run over the weekend, and did 2 short runs instead. It was a step back week, so I'm okay with it. Sunday's run would probably be the highlight - a trail run up to Devil's Thumb with Jen (who goes to some of the run club events) and our pups. We got the idea from another runner (also named Jen actually). Unfortunately we never really could find the trail, so it was more of a cross country trek. It worked out, except Argie stepped on a few cacti which he wasn't a fan of. 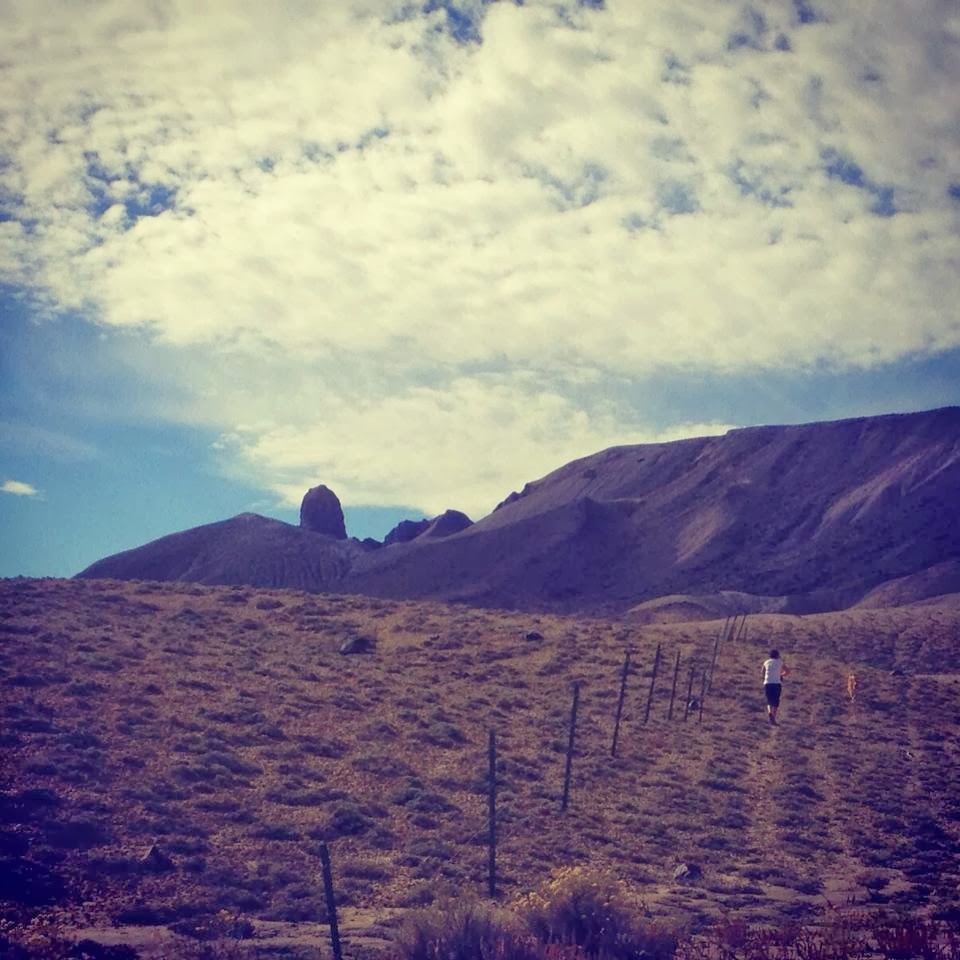 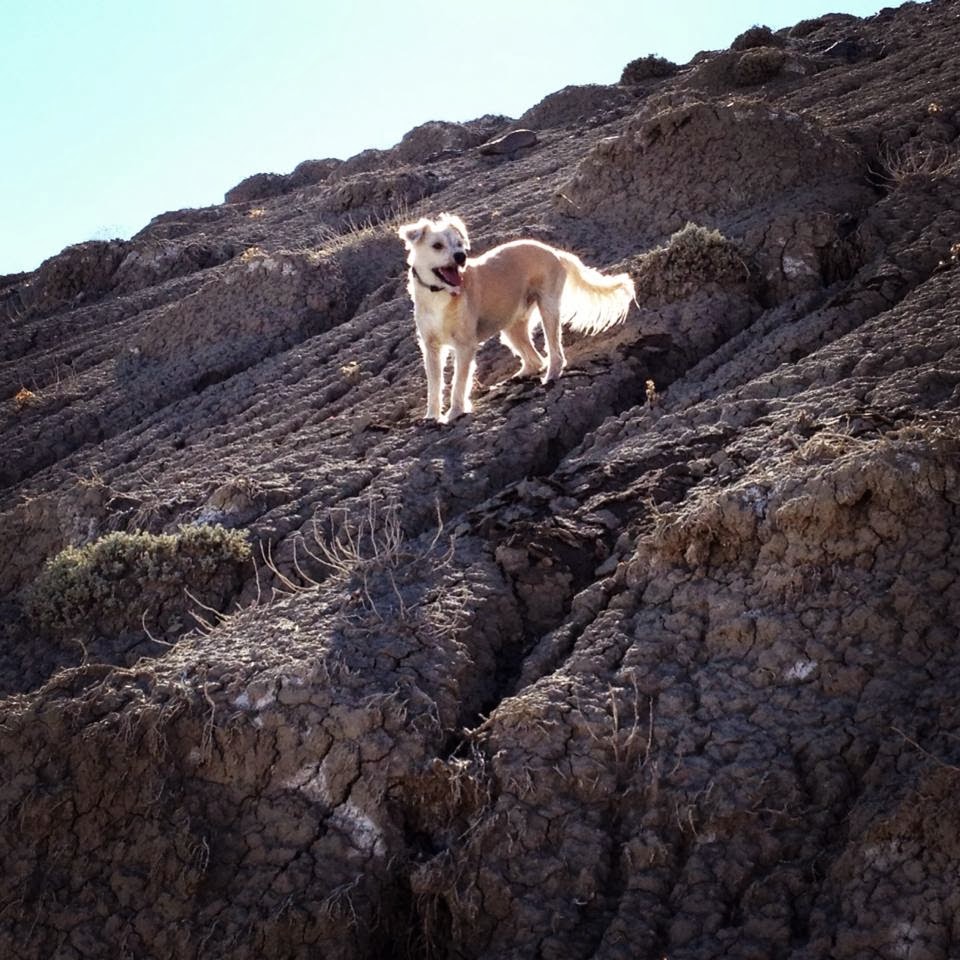 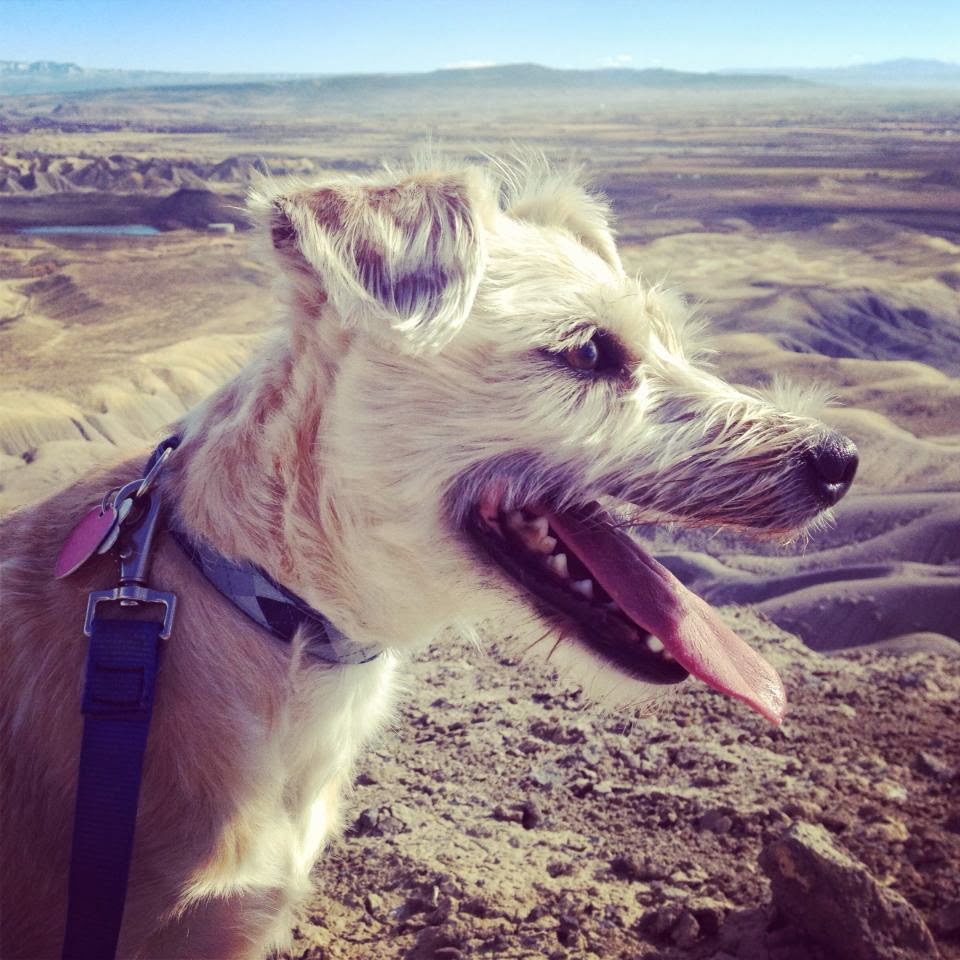 Nothing too exciting during week 10. Another lunch run on Wednesday - I'm kind of liking these - I know I could never do it in the summer because I sweat too much, but it's been great in the cooler weather and allows me to get some daylight running in during the week! I also went to the Saturday morning group run, where we ran over to the track for some speed work.

Week 11 was great. I got all of my weekly miles in, tried out Cross County Skiing for the first time, and got my long run of 18 miles in!

The cross country skiing was through a group called "Western Slope Adventures". They put on various outdoor activities around the Western Slope. I had really been wanting to try some winter activities this year, so I was glad to tag along on Saturday. I originally wanted to snowshoe, but all of the people I was going with were going to be cross country skiing, so I figured I would give it a shot. And it was actually quite fun! I really enjoyed the flats and slight uphill sections. The downhill sections scared me a bit - I felt like I couldn't stop without falling over. But I was starting to get the hang of it by the end.

Oh and the weather was perfect. I was afraid I was going to freeze my butt off, as it was snowing on the way up. But it ended up snowing off and on, never for too long - just enough to really enjoy it! It really was like being in a winter wonderland! It's amazing how much snow they get up on the Grand Mesa. 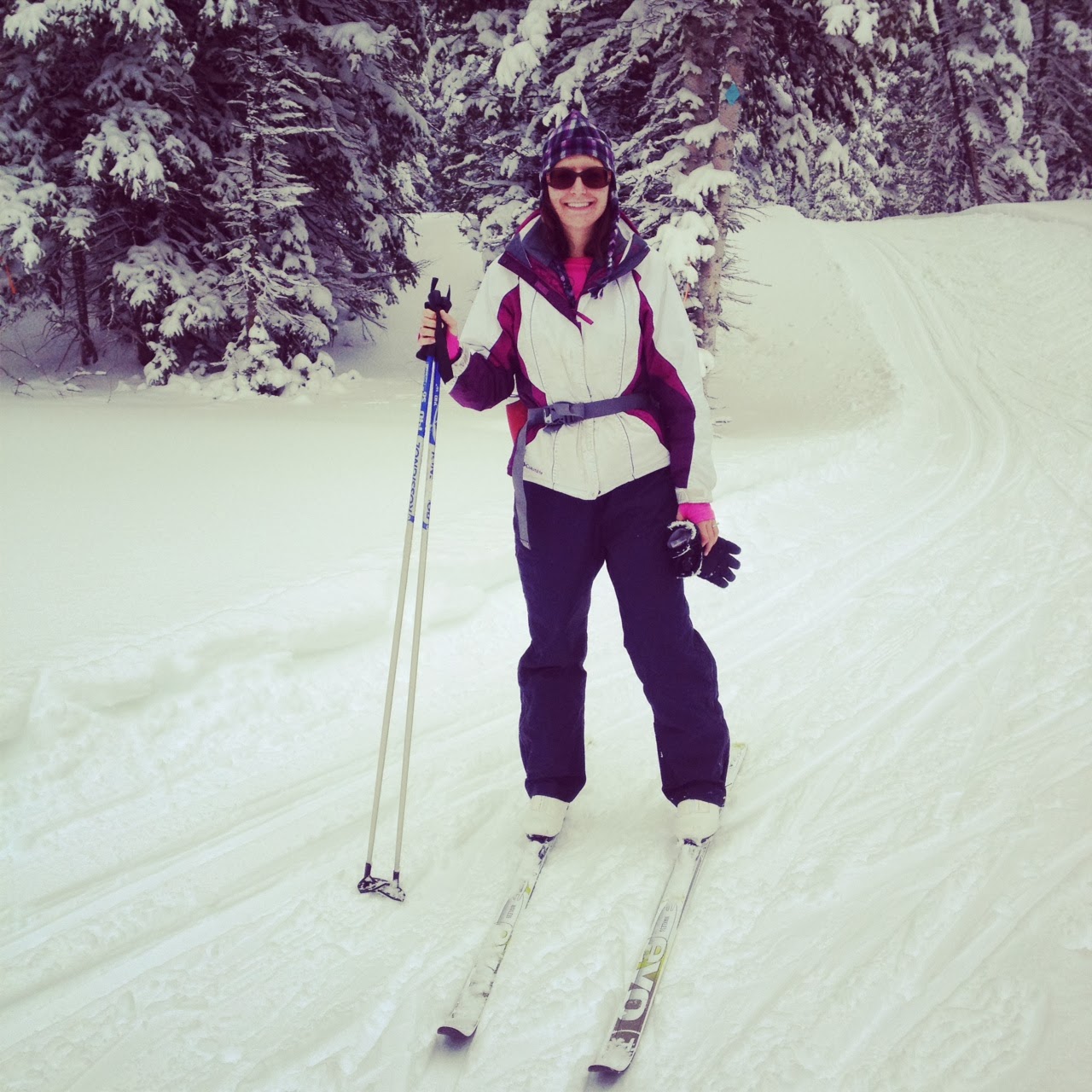 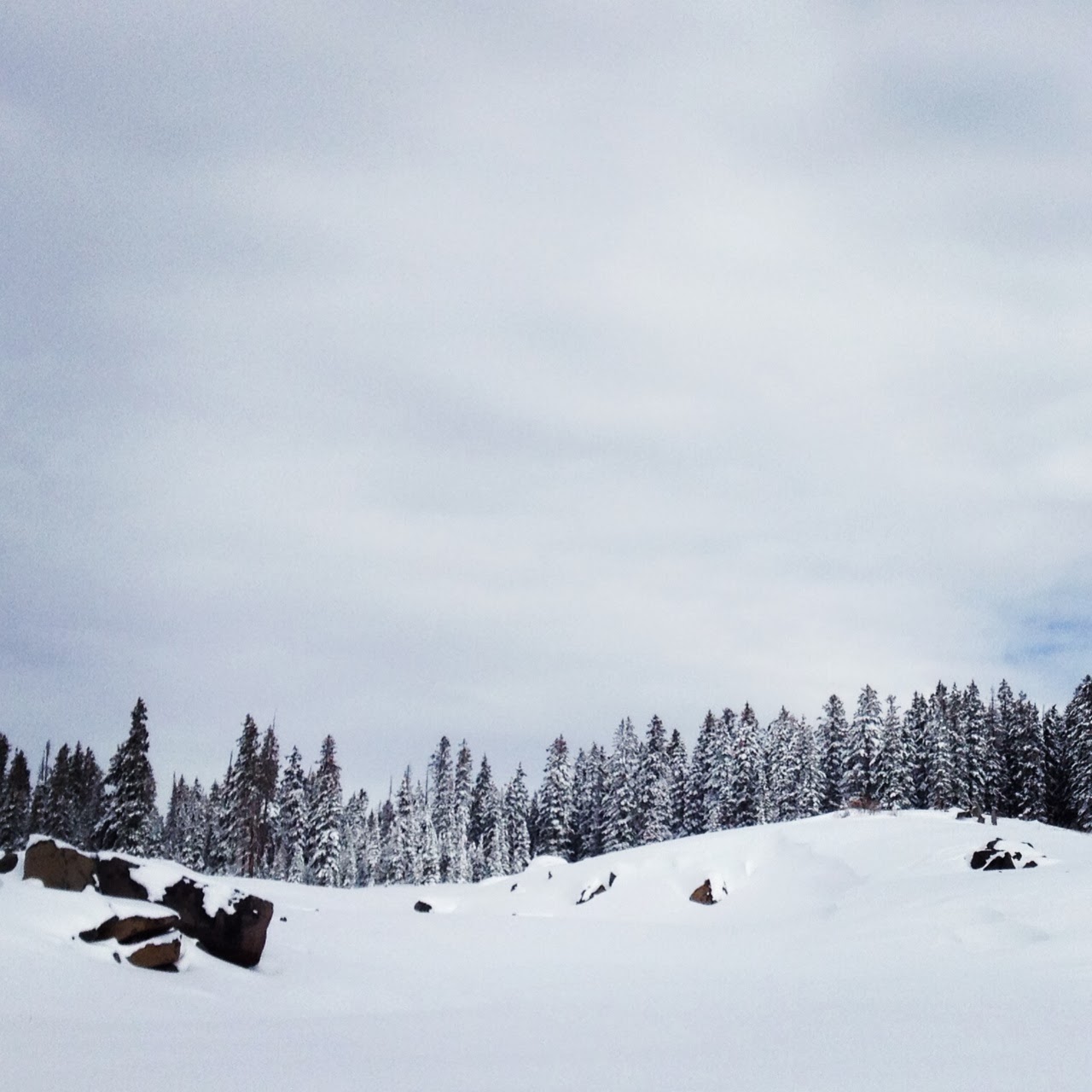 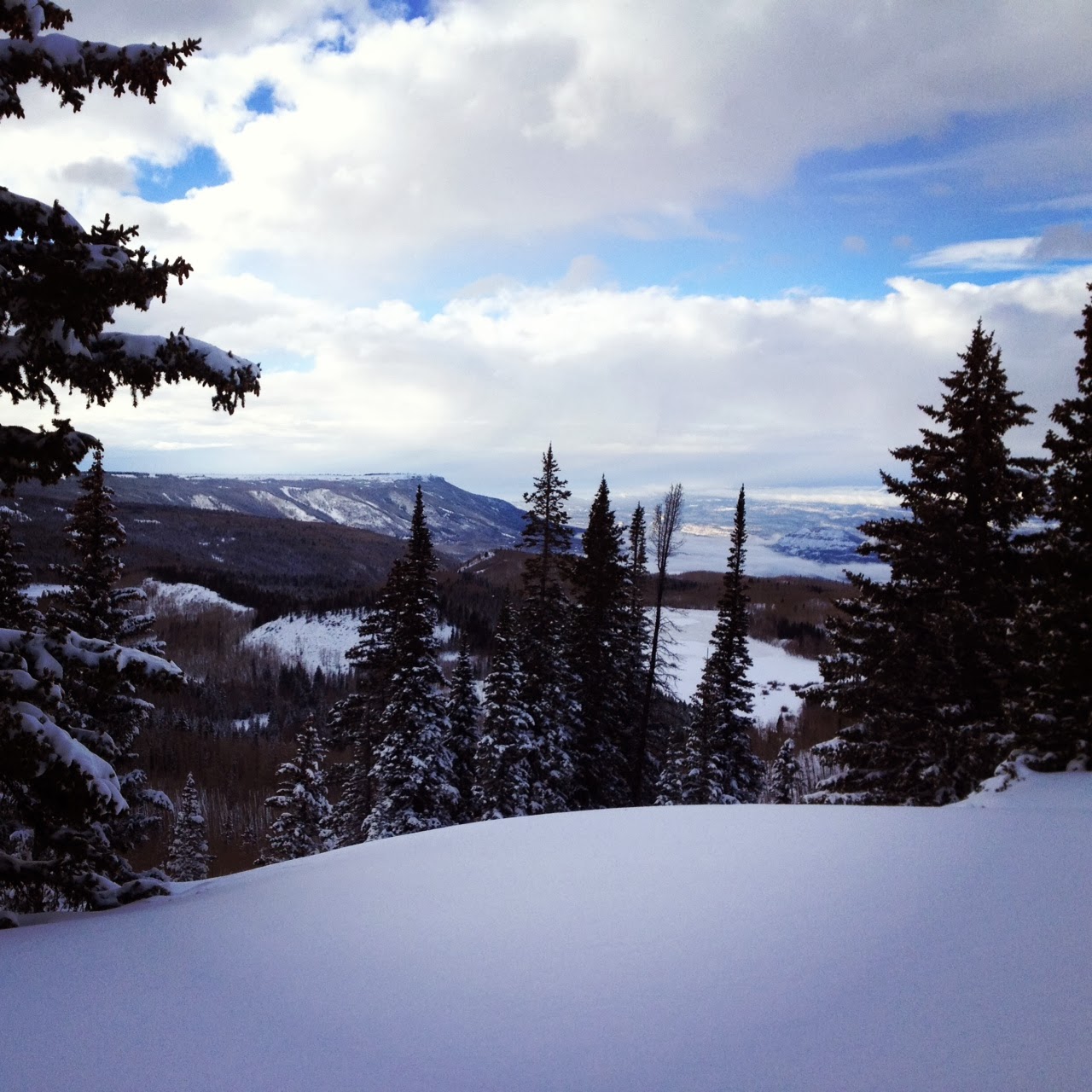 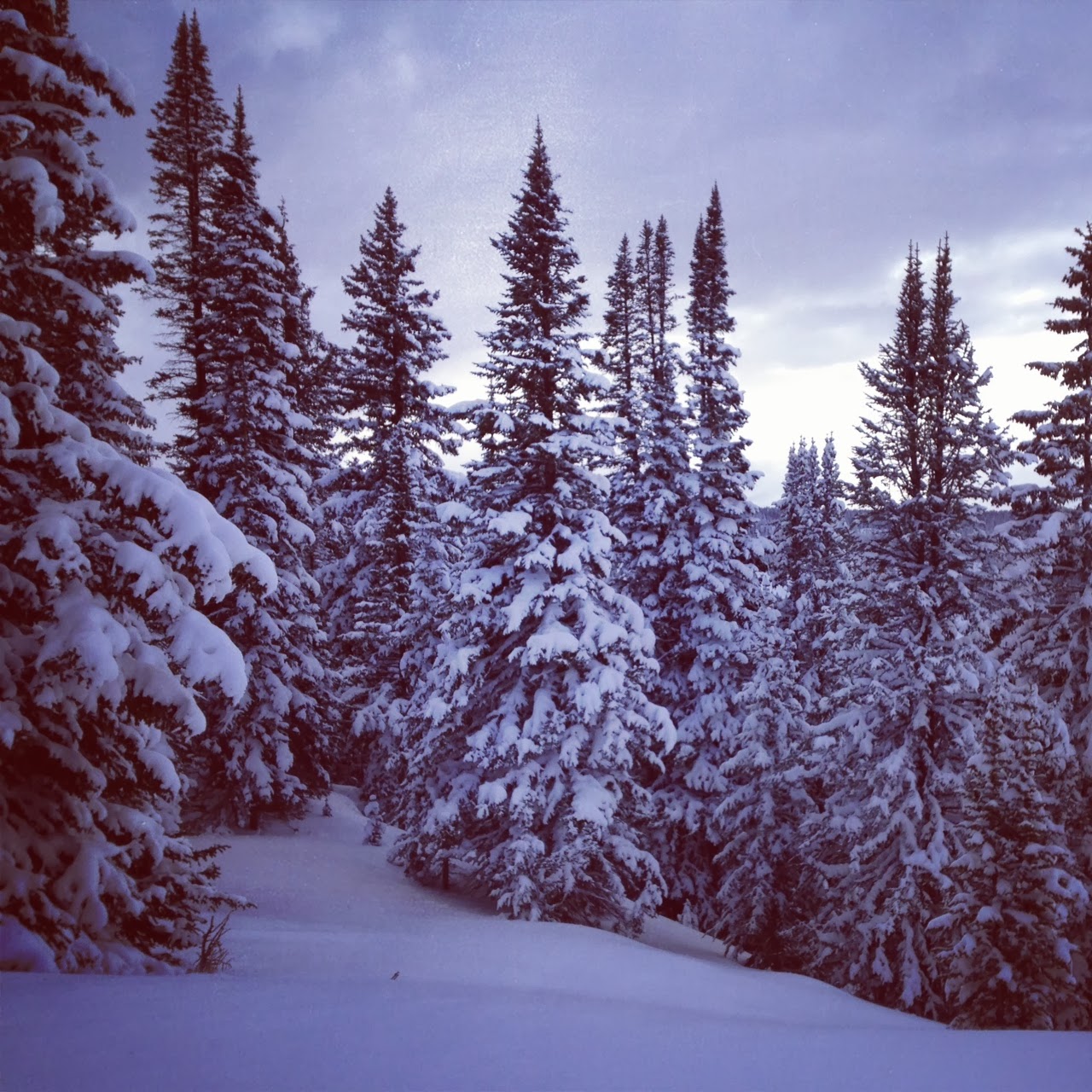 The 18 mile run went pretty well. It was a good thing I did an out-and-back because it started raining around mile 8, which then turned to snow around miles 10-11, and kept snowing (right into my face) for another 6 miles or so. If I had been closer to home I probably would've called it quits. But I pushed through, and it ended up stopping with about a mile and a half to go. So I finished all 18 miles which felt really good!


Thanksgiving Week! I don't know what is with the holidays, but it automatically seems to give me an excuse to forego a bunch of miles. Skipped Monday's cross training and Tuesday's 5 miler. Almost skipped Wednesday, but did get a few miles in on my lunch break.

I finally picked things up at the end of the week (which seems strange considering that was actually the "holiday" portion of the week). Thursday, I got my family to all participate in the Turkey Trot again this year. I think they had fun. Scott had fun beating me! I started up front, and he started back with my family, so I didn't see him the whole race, and at the last second, right before the finish line he comes sprinting past me. 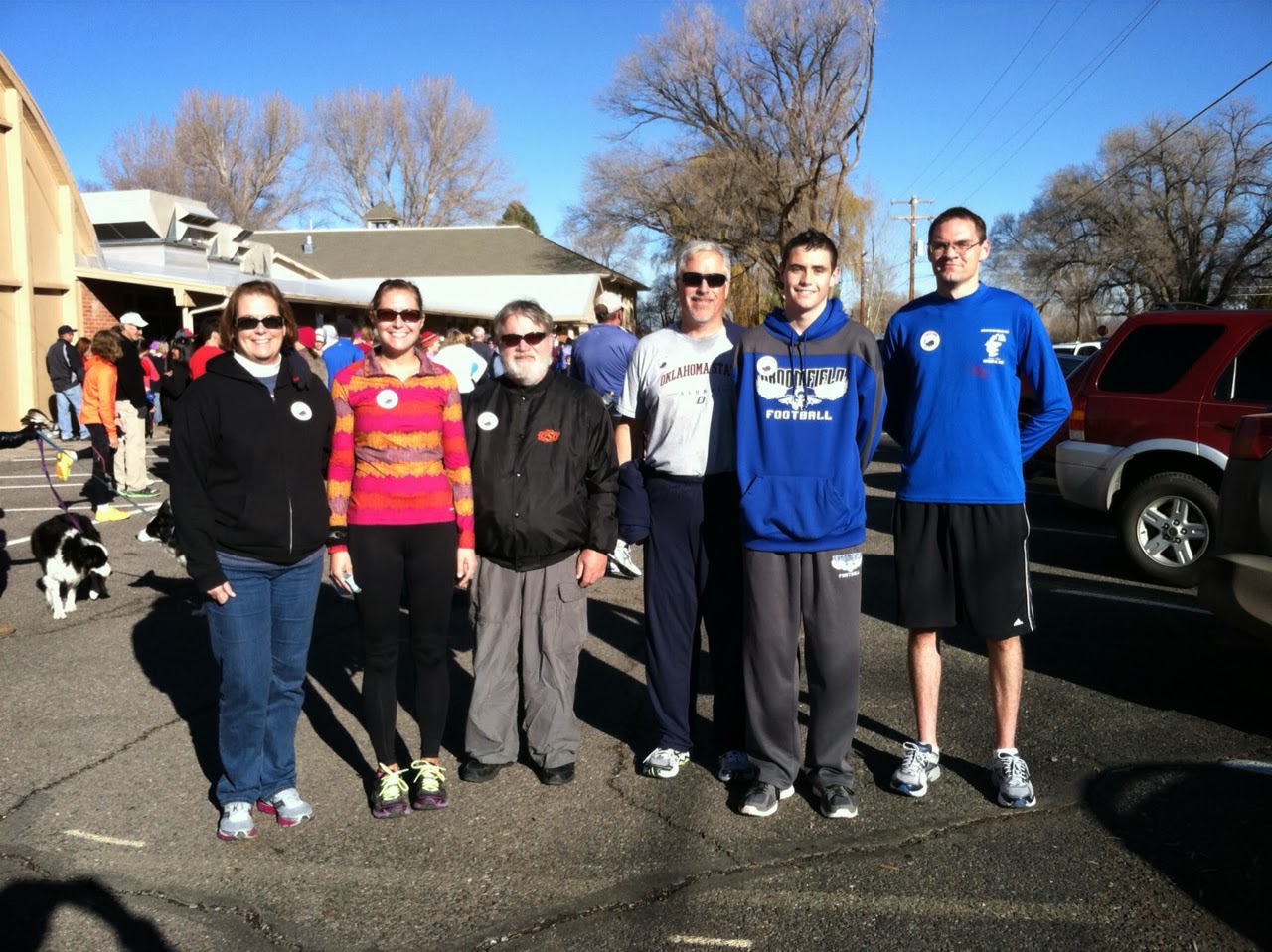 Friday I took my family snowshoeing up on the Grand Mesa. We went to the County Line Ski Area this week (last weekend we were at the Skyway Trail), along with Argie. I think he had fun, but I definitely want to get him booties if I plan on taking him out for longer. His paws had a lot of snow stuck in them and I think it bothered him a lot. I think my family also had fun. I enjoyed it as well and I'm thinking I want to get myself a pair. I think snowshoes will be more versatile than cross county skis (plus I can take Argie). 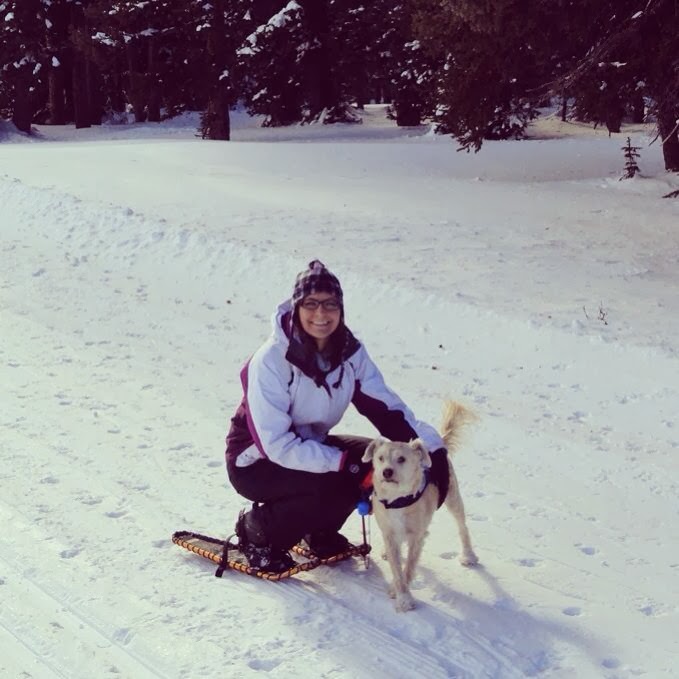 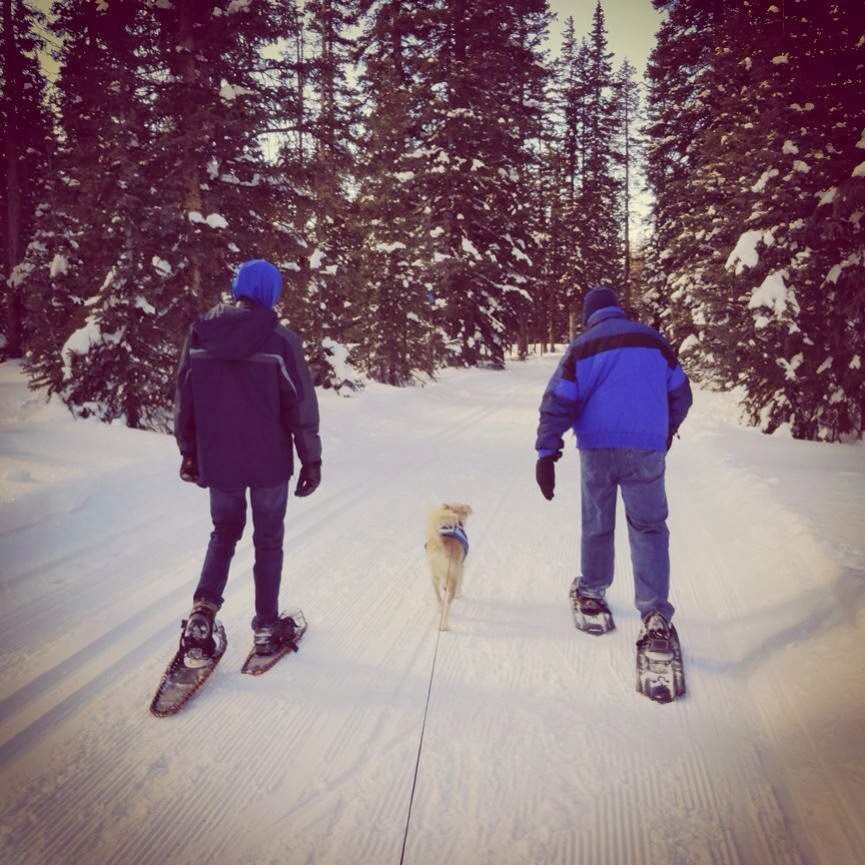 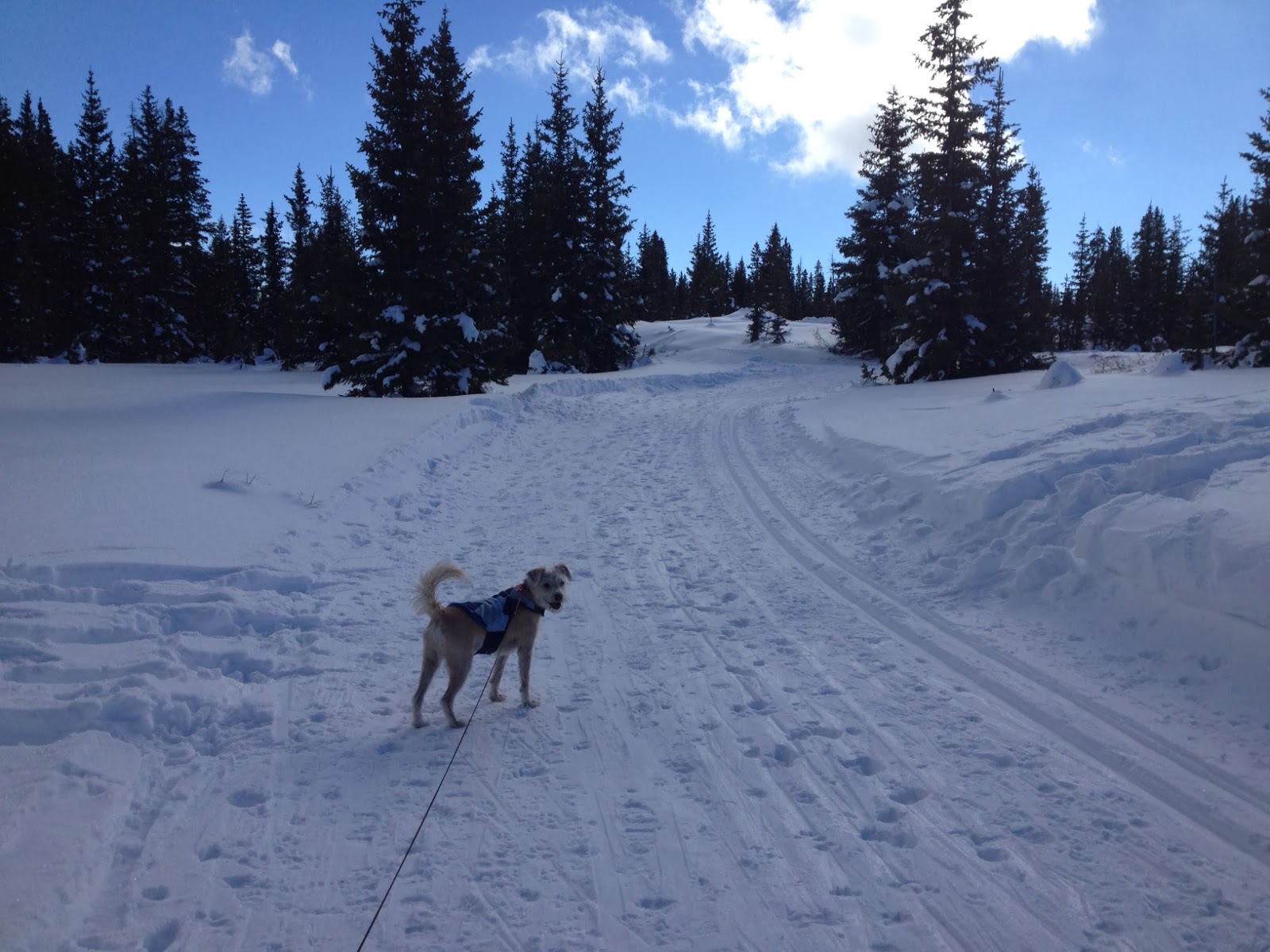 Then Sunday, I did manage to run a semi-long run of 13 miles. It was fairly cold out the entire time, so I was happy when I was finished.


Week 13 went GREAT...until Sunday came around. I was on a roll - for the first time in what seems like forever, I got ALL of my weekday workouts in before work! Then on Saturday I had my last race of the year (the Moab Winter Sun 10K) where I got a new 10K personal record with a time of 51:25 (over 2 minutes faster than my previous PR), and placed 5th in my age category (out of 42 - so a decent amount of people). 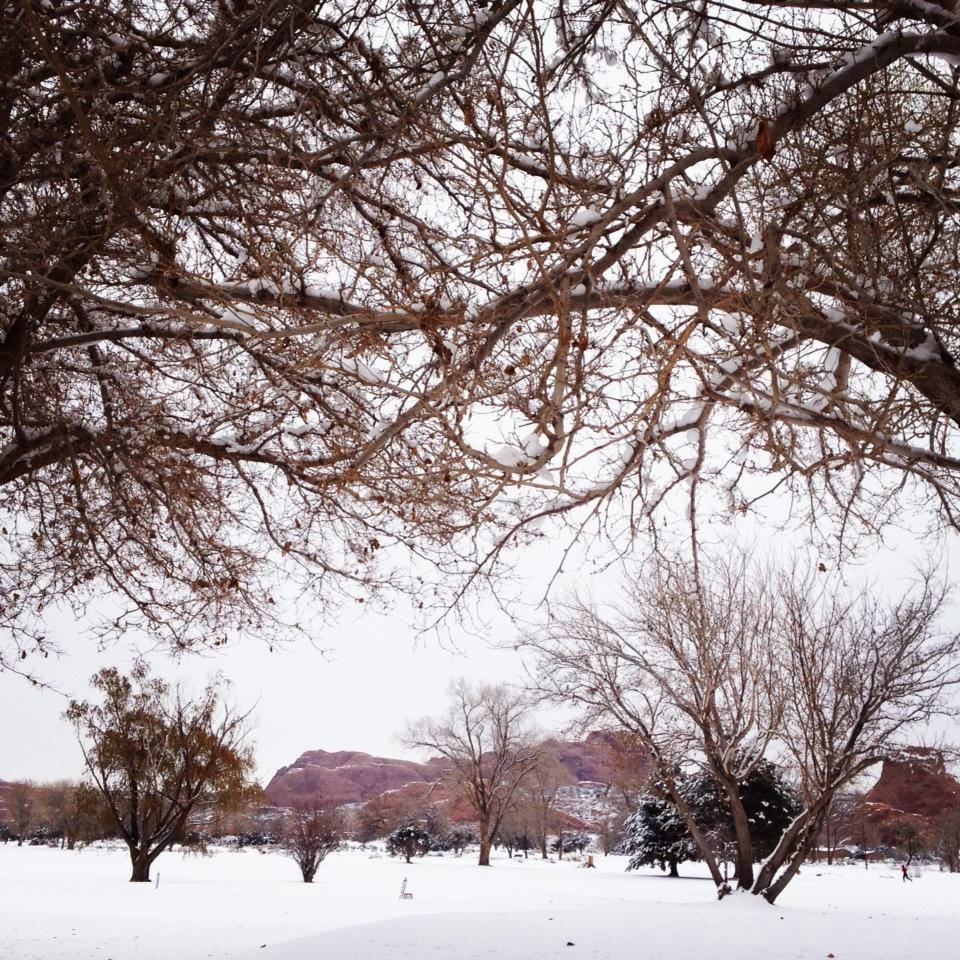 And then Sunday...well I don't know what happened on Sunday. I lost all motivation. Although most of it had to do with the cold and snowy weather (we got a foot of snow on Wednesday). I about froze my butt of during Saturday's 10K, and it was supposed to be even colder on Sunday. 18 degrees was the high, and NO SUN. I mean come on, this is Colorado - where was the sun?!

So after much self deliberating, I decided to skip my long run. Now I know this sounds like a bad plan. BUT, the one nice thing about my training plan is that it has "step back weeks", where I get a nice break...so I decided to just swap weekends and post pone my 20 miles until next weekend (which is a step back week). I checked the forecast, and while it's not going to magically turn into a perfect 50 degree day, it should be a little more bearable - in the upper 20's and 30's. Plus hopefully some sun, and, finger's crossed, clear, non-icy sidewalks!