I love hiking in the summer, but it's a long 6+ months when the trails are snow covered to go without some time spent in the mountains. So for awhile now I've been wanting to try out some winter mountain activities. And preferably activities that don't cost too much - ruling out downhill skiing.

So when a friend from the local run club told me about the Western Slope Adventures - a group on "meet-up" that organizes various outdoor activities in the area, I decided to sign up! My first event would be a day on the Grand Mesa with the option to Cross Country Ski or Snowshoe. My first thought was to snowshoe, solely because I was less intimidated by it, however it turned out that everyone else going was going to be cross-country skiing. So I decided to give it a whirl. After all, my whole motto this year has pretty much been to step out of my comfort zone and try new things!

The Grand Mesa is a great place for both cross country skiing and snowshoeing. The "Grand Mesa Nordic Council" manages and grooms the trails, as well as provides updates on weather conditions online. So on November 22nd, I set out with some new acquaintances for my first Nordic adventure on the Grand Mesa.

Our drive up was snowy, snowy, and more snowy. I was a little worried that I was going to freeze my butt off. On the bright side though, the Mesa looked beautiful. It truly was a winter wonderland! It's amazing how much snow they get up there. Luckily when we arrived the snow had stopped. We got ready and waited for a few others to join us (coming from the Grand Junction side), and then we got started.


It was a little more nerve wracking getting back into skis (for the first time since high school) then I imagined. Pair that with the fact that cross country skiing is very different than downhill skiing, and stopping on a downhill can be a little scary! One of the guys with us took some time to show me some techniques which was really helpful. After that, I felt a little better, and was sort-of able to keep up with everyone.

I really enjoyed the flats and the gently sloping hills. The bigger hills - not so much (both going up or down!). But the more I went, the easier it became. We did two large loops around the ski area - and even now, looking at the map, I still can't quite figure out where we went (and I swear, I'm usually pretty good at reading maps), or how far we went. But it was fun, and the weather ended up being great. We even had blue sky's for an hour or so.

On the second loop, after we had been going for several hours, we stopped at a scenic overlook where you could see for miles. Someone had brought wine, and we all shared snacks. It was great! 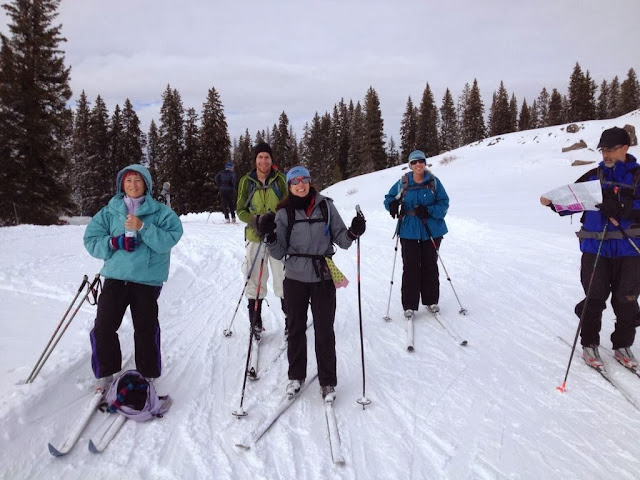 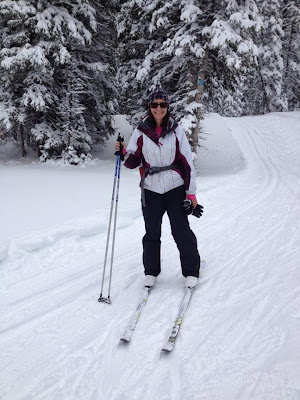 Not quite a week after my first time cross-country skiing, I decided to try out snowshoeing. Now, technically, I have been snowshoeing once before. But I think I was only like 8 years old or something. So I was ready to try it again! My family was in town for Thanksgiving, and every time they come, I like to take them somewhere new. They had yet to drive up on the Grand Mesa before, so I thought it would be perfect!

We set out Friday morning, drove into Cedaredge to rent snowshoes, and then headed up to the County Line ski area. The week before I had been at the Skyway Trail, so I figured I should try something new - plus the fact that I wanted to bring Argie, and dogs are not permitted at Skyway (also - County Line is where the Grand Mesa Half Marathon I did last September was - looks a little different when it's covered in several feet of snow!).

Overall, the County Line trails we were at (mostly the dog loops) seemed more flat than Skyway. I definitely think I would enjoy cross country skiing here. Argie had a lot of fun, although I do want to get him boots if I take him again. He got a lot of snow and ice stuck in his paws. One thing I don't like about dogs being allowed - is that people let their dogs off the leash, and then because of this, don't see them do their business - meaning there's big piles of dog poop on the trail. Kind of annoying to us dog owners who DO actually clean up after their dog. I'm all for not having your dog on a leash (if it's well behaved), but you still need to stay in sight of your dog, WATCH them, and clean up after them - especially if it's right in the middle of the trail.

But overall, despite the dog poop, we had a good time. It was a beautiful day (in fact, it was during the "inversion" - so it was warmer on top of the mesa then it was when we stopped for lunch back down). We had blue sky's, lots of sun, and glittering snow! A great way to start the Christmas season. On our way back home, we stopped for lunch, and then at Drost's Chocolates in Eckert. 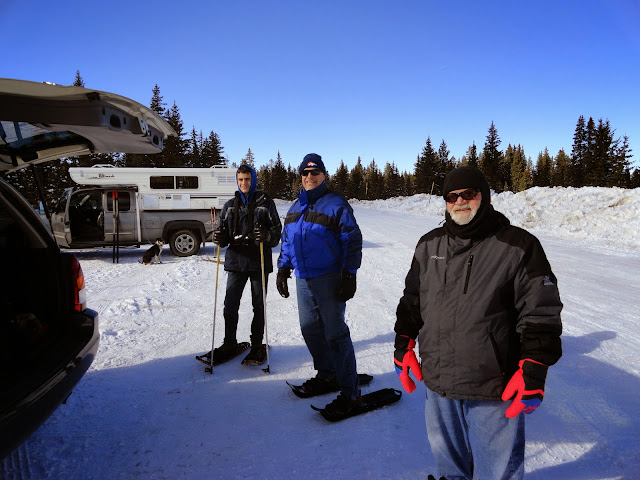 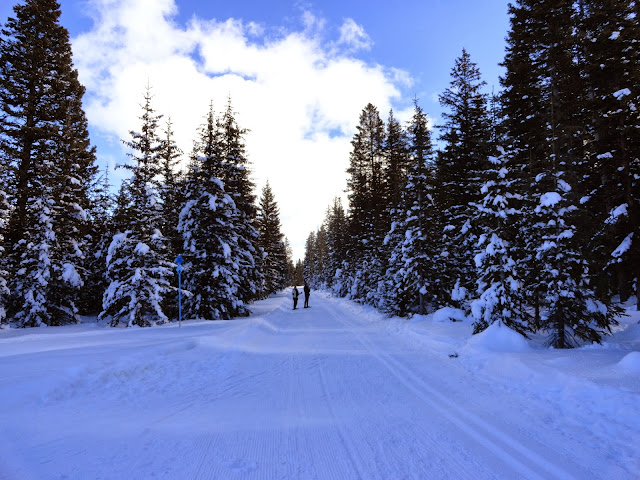 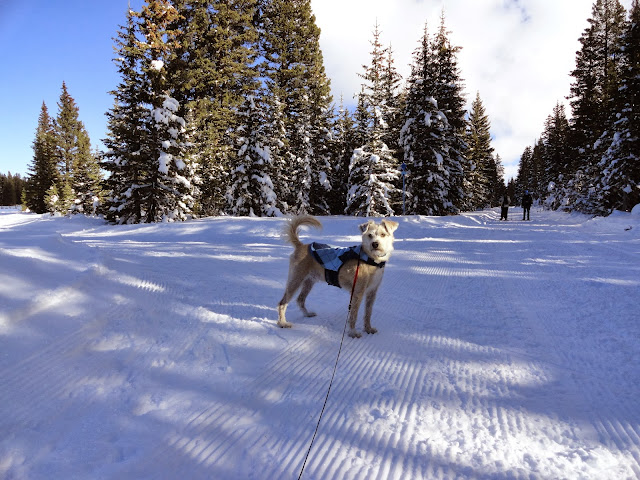 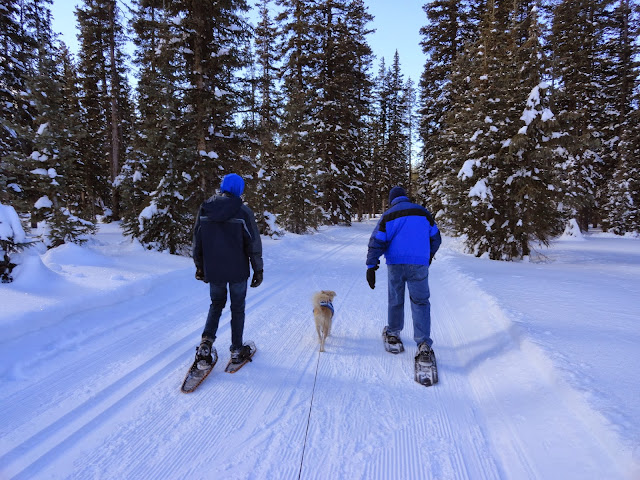 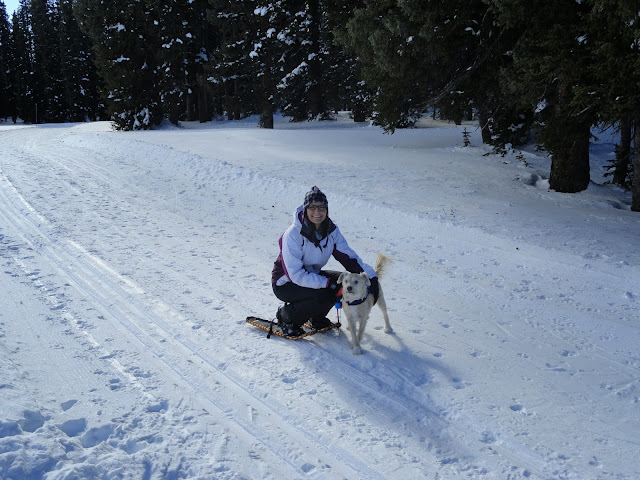 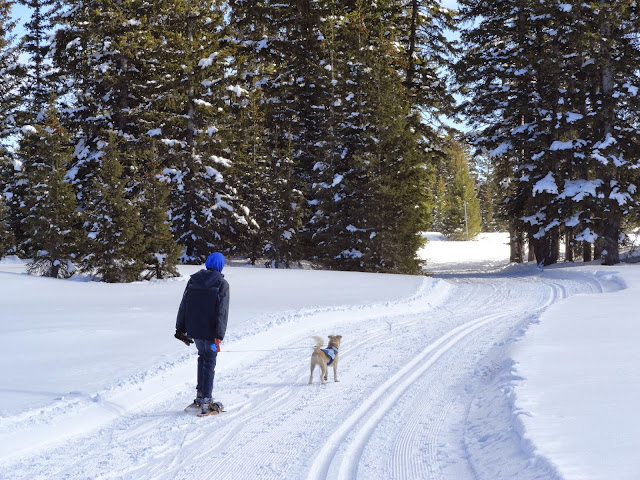 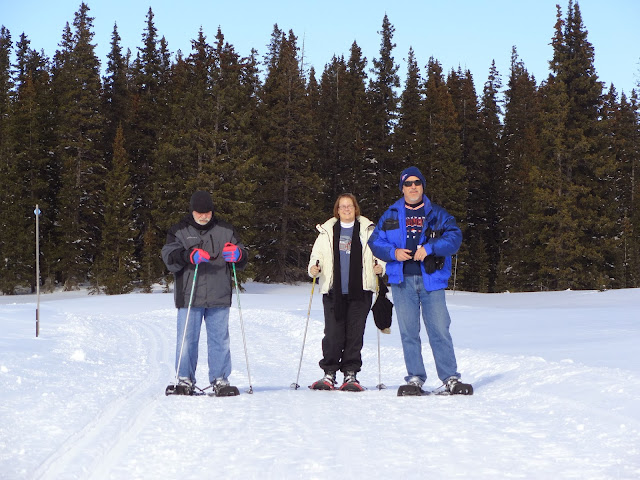 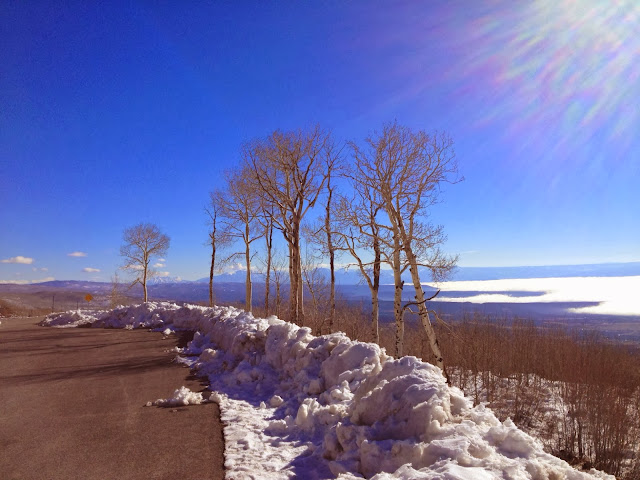 Overall, I really enjoyed both the cross country skiing and the snowshoeing. I'd like to get a pair of one or the other, so I don't have to rent every time, but am still not sure of which. I'm definitely leaning more towards snowshoes just because I feel like they will be much more versatile. I can use them on more types of trails, plus I can bring Argie with me (I know I can bring him on skiis - but he'd have to be off-leash, and I'm just not comfortable with that). So we will see what I end up doing (or if I even end up getting any - I'm going to try and be much more frugal starting in 2014, so I may just fore go it altogether unless I can find a good used pair somewhere). I definitely want to do the Black Canyon Rim Romp though - it's a 10 mile cross country ski, or 5 mile snowshoe at the Black Canyon put on by the San Juan Mountain Runners. I wish I had stepped out of my comfort zone and did it last year - because they actually have a "triple crown" award for doing all 3 of the Black Canyon races - and that was the only one I didn't do! So this year I am determined to do it (and that brings up another cool thing - once they get enough snow, you can go snowshoeing and cross country skiing at the rim of the Black Canyon - only 15 minutes away!).