Todays post is going to be an overview of my first official IPR training run. I don't know how often I will post about simple training runs, but I wanted to at the start of my training, to hopefully help me keep track of my progress over the next few months as I get ready (and hopefully improve) for Imogene Pass Run.
That's right - I never did update the blog world to the fact that I did decide to sign up for the IPR. I'm definitely nervous but I knew I would regret it if I didn't do it. I really wanted something hard to train for and keep my butt moving this summer. After today's first training run, I can safely say this race is definitely going to accomplish that! I think the word "Imogene" is just going to be constantly repeating in the back of my head for the entire summer!
I had a variety of choices on what and where to run today, but I ended up settling on running part of the course itself -  just barely short of the first 7 miles, and then back down for about 13.75 miles total. I'm not 100% positive that the distance is right because my Garmin was dead (still upset about that - I swore it was charging all day on Thursday and I hadn't touched it since, but ohwell) so I had to just kind of wing it while running (and then when I got home I plugged it into google, as I could remember). I decided on running the course (as opposed to other trails in the area) because I honestly didn't know what I had gotten myself into signing up for this and I wanted to get a good feel for what I was going to be facing come September. It ended up being a great run (definitely difficult as I will account) and I definitely hope to do it a couple more times this summer, and maybe even go to the top of the pass at some point (although if I do this, it'll hopefully be with some other runners - I know a few out of Delta who'd like to do it).
I left Montrose around 7am this morning, aiming to start running around 8. I had heard from some experienced IPR runners that there's a nice place to park at the Thistledown campground - a couple miles up Camp Bird Road. Well as I was driving up, it seemed a bit further than I wanted (I kind of wanted to start close to the bottom) so I ended up parking about a mile earlier, at another camping area -Angel Creek Campground. It had a nice parking lot and a great map showing Ouray, Camp Bird Road, Imogene Pass Road, and all the way to Telluride!
Once I was parked, I quickly got on my way. Not even a couple hundred feet in and I was already dying. It was steep! I was hoping that since I'd been running the Black Canyon Ascent route, I wouldn't have to walk very much - especially at the beginning, but unfortunately I was mistaken! I tried not to let it bother me, after all most everyone walks parts of Imogene. But I just kept thinking, well yes people walk, but this is the beginning, it's supposed to be the easier part! But, as Jillian Michaels says (I might have a love/hate relationship with Jilllian Michaels workout DVD's), "we start where we start and there's no shame in that", so I decided I would just do the best I could, after all this is my first attempt at it and I still have 2 1/2 months to get ready! Plus I figured if I'm going to be waking, I might as well enjoy the scenery! And enjoy it I did! It was beautiful out! There weren't too many cars out yet and the weather was just perfect!
Not quite a mile in and I reached Thistledown campground (where I had originally planned on parking). There was a restroom there so I made a quick stop and then headed on my way again. Shortly after, I reached this part of the road: 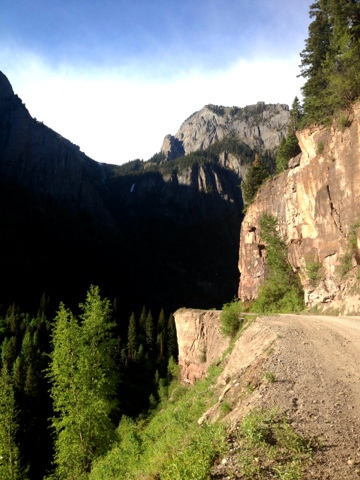 I vaguely remember this from when Scott and I drove to the trailhead for Mt. Sneffles last summer. It's just crazy to see from afar! Luckily the road is plenty wide, so not too scary once you're on it. I continued on a ways, doing a kind of steady run/walk routine which was working out pretty nicely. Every once in awhile a car would pass me and so I used that as a little motivator to start running again so they didn't judge me walking (not that they would since they're sitting in a car, but it still worked for self motivation).
Eventually I finally made it to the "c" - an area I really remember well from driving to Mt. Sneffles. I kept wondering when I would get there all morning, so it was a relief to finally make it. The road is pretty narrow at this point, but luckily no cars where coming so I ran right under it (it's hard to tell from this picture, but the rock goes over the road, creating almost a "c" tunnel, which is why I called it that). 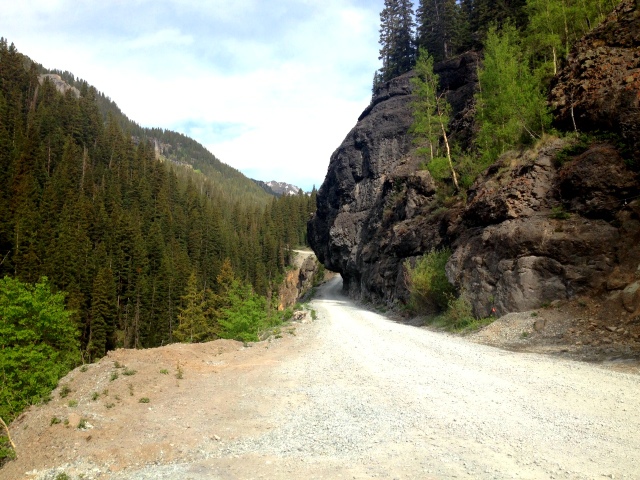 After that, it wasn't too much longer when I reached the junction of Camp Bird Road and Imogene Pass Road. I need to read the course description again because the map where I parked made it look like there may be a shortcut to cut over onto Imogene Pass Road at an earlier point, but I didn't ever see it. Anyways, I wasn't too sure I wanted to actually go up Imogene Pass Road too much, just because I figured there wouldn't be many, if any, people on it, and I was by myself. I did decide to go a short ways onto it just to get a feel for it. I made it to the below picture before turning back (maybe 1/4 mile in). 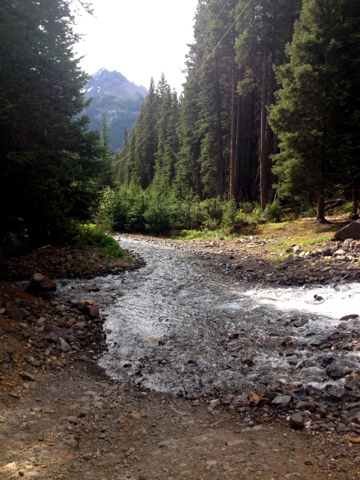 After I got back to the junction I decided I would try to run up to Yankee Boy Basin (where the Mt. Sneffles trail head is), just to get a little more distance in (I was guessing that I was at 4-5 miles at this point). This road is more public, and I had been on it before, so I thought it was the best decision. Well the decision was a little short lived because only a couple minutes later and I heard some really loud thunder. Seeing that I was 4-5 miles away from my car at 11,000 something feet altitude, I decided to turn back.
I never did get rained on, but I'm still glad I didn't risk it. The downhill section went by fairly quickly, and although it was moderately steep it didn't feel too bad on my knees. By this point in the day, the road was getting much more crowded which meant it was getting pretty dusty. Most of the time is was okay, except for those darn ATVers that zoomed past!
I finally made it back to my car, had some Gatorade and the decided that since it never did start raining, I still wanted to get a few more miles in. So I left my car where it was and ran downhill some more back towards Ouray. I ran almost all the way down Camp Bird Road, turned around, and run/walked back to my car!
So overall, I did go well, but, I definitely have my work cut out for me! I need to work on pushing through and not stopping to walk unless I really need to. And when I do need to, I need to work on my power walking and not leisurely walking. There are time cut offs, and I want to make sure I'm not anywhere close to getting sent back to Ouray come race day! I know I can do this!
A few more photos: 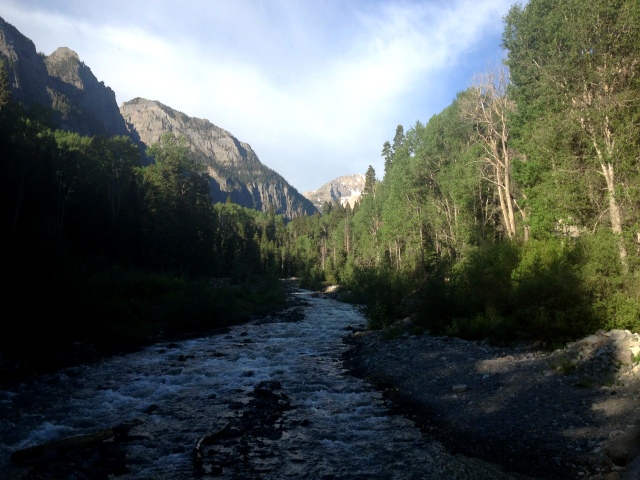 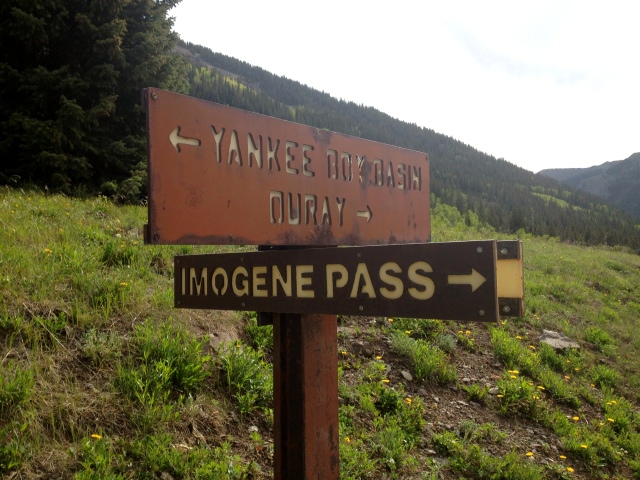 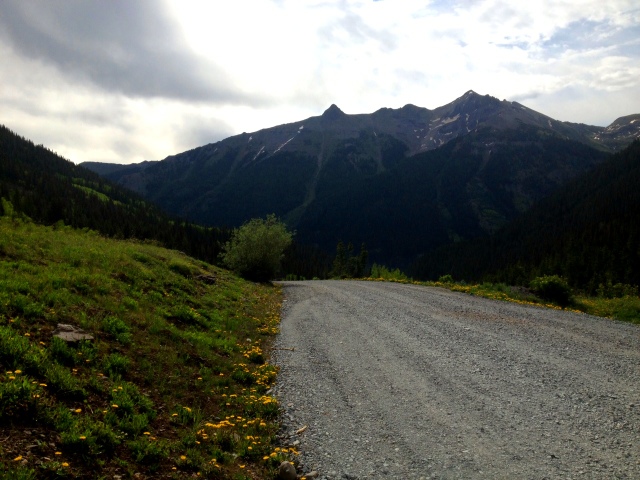 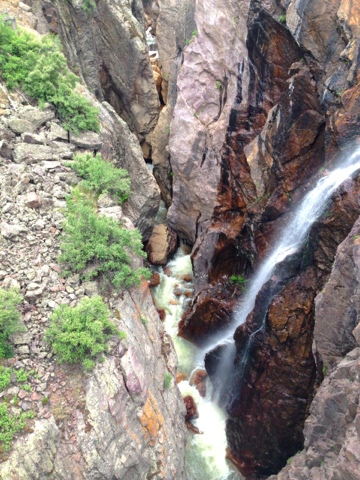 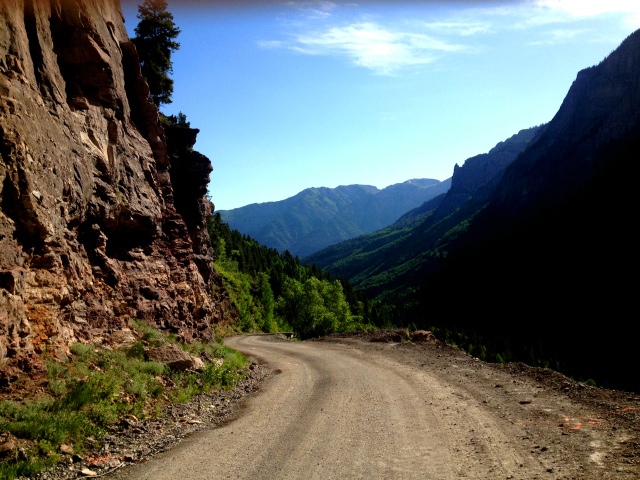