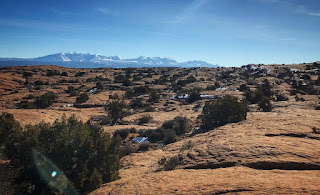 At the end of January I ran the Arches Half Marathon as my first race of 2019. This is a trail half marathon put on my Mad Moose Events and is part of the Arches Ultra races (so not to be confused with the road "Arches Half Marathon" that Mad Moose Events puts on in October). After having a great race at the Dead Horse 50 Miler in November, I had every intention to run the 50K here...but life got a little busy and my training fell by the wayside, so I settled on dropping to the Half Marathon instead. I also figured the Half Marathon would be a good way to jump start my training for Boston as well.

I drove out to Moab on Friday afternoon with friends Rochelle and Karla. Because January is the off season in Moab, we got an amazing deal on the Fairfield by Marriot there ($65/night and it was nice!). When we got into town we stopped by packet pick-up and then had a casual evening, getting dinner at a new Italian place - Antica Forma (I actually went to this same place for Winter Sun 10K as well - their pizza is very good). Back at the hotel we enjoyed a few minutes in the hot tub before heading to bed.

Karla was doing the 50K which started an hour before Rochelle and I's Half Marathon did - so we needed to be at the start line around 7:30 for her 8:00am start. Getting there early actually worked out well because I really wanted to do closer to 15 miles for the day, so I did a two mile warm-up right before we started the Half Marathon. It worked out perfectly because I would not have wanted to add any mileage after the race!

Right at 9:00am the Half Marathon started. The first mile and a half were on the bike path heading southeast from the Gemini Bridges parking area (start line). From the get-go my legs felt super heavy and I could tell I had not been running much...but nevertheless, I settled into a steady pace behind some other runners as we got off the bike path and onto the trail. From about 1.5 to 4.5 we had some rolling hills as we made our way to the first aid station. Because this was just a half marathon and I had a handheld water bottle already, I opted not to stop at the aid station and just continue on past it around Mile 4.5. 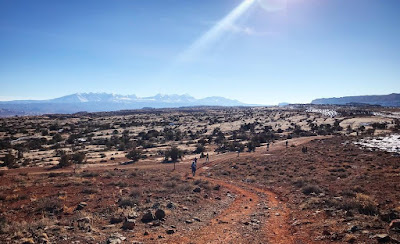 We had another mile or so of uphill before the course profile made it look like it would be downhill for a couple miles. Prior to the race I had decided I would run the first 7 miles easy and then try to pick up the pace on this downhill stretch... Well, that was a naive thought because around Mile 6 the slick rock started through Mile 11.5... and it was hard slick rock to run on. Don't get me wrong - it was beautiful and definitely my favorite part of the course for scenery but it was tough to run on. When I did Dead Horse last fall I remembered thinking the slick rock really wasn't too bad... well this slick rock was. It was extremely uneven and I almost tripped about 10 times... so I threw out my plans to pick up the pace and just went back to enjoying the views. 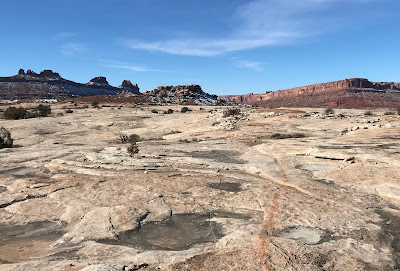 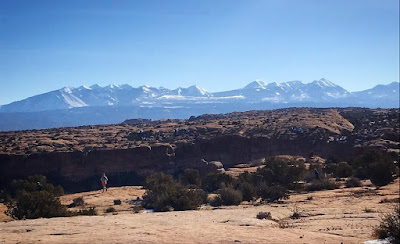 Around Mile 11 1/2 we finally got off the slick rock and headed back to the aid station at Mile 12, followed by a mile on the bike path back to the start. I did try to pick up my pace for this last mile but given my lack of running and the 2 mile warm-up from before the race and I was exhausted... nevertheless I did meet my goal of running under 2 1/2 hours, finishing in 2:25:17.

After the race we actually went back to the hotel and enjoyed the hot tub one more time before we went to wait for Karla to finish the 50K. This is one of the few times that I've been running the shorter distance than friends and I have to say, it was kind of nice to be able to just relax and wait for them to finish as opposed to the other way around - I might be doing this more often!

As far as the race goes - I did enjoy this course a lot, but it was much more challenging than I expected. The views on the slick rock section were awesome but it was a challenge to run. The trail was well marked (although being in the Half Marathon, I was never alone - there were always people in front and behind me). I did hear for the 50K and 50 Milers had a fair amount of mud to deal with, but on the Half Marathon course we were fine and had no issues. Overall I did like the course and I always enjoy Moab, so I recommend coming out for this race!