Moab in March - Canyonlands and Behind The Rocks 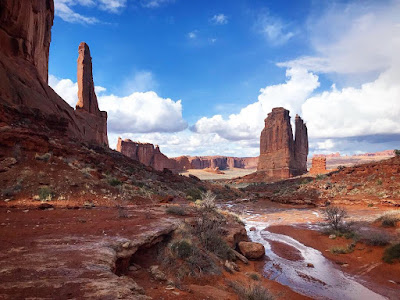 My blogging has been lacking to say the least, but I wanted to get a brief recap up of what has now become my tradition of racing in Moab every March. Since my first half marathon in 2013, I have ran a Moab race in March every year since - so I couldn't miss this year... not only that, but decided this year to go big and actually do back-to-back weekends racing in Moab with Canyonlands Half Marathon one weekend, followed by Behind The Rocks 30K the following weekend. It was a bit of a crazy couple of weeks but ended up being a lot of fun as always! So without further ado...

I had debated doing Canyonlands this year just because I really wanted to do Behind The Rocks 30K, but when my friend and fellow Skirt Sports Ambassador Jayme reached out to see if I wanted to join her and some friends renting a condo, I couldn't pass it up! Additionally, I ended up snagging the 2:00 hour pacing slot - something I've wanted to do for several years now, so it was perfect!

Since it's now been several months, I'll keep the recap short, but essentially I had a blast pacing this race. My co-pacer and I took turns holding the sign and setting the pace, and we ended up finishing just over the 2:00 mark. We had been on pace the entire race but since we had a little extra time, decided to hold back a little and encourage some runners in...but by doing that we actually missed being under 2:00 and came in around 2:20. I was a little bummed to miss it, since I finished my last two pacing gigs about 10 seconds under, which is kind of perfect, but if we encouraged some runners to pick it up at the end then I think we still did our job!

This was my first time in several years that I've stayed in Moab post-race, which meant I could actually enjoy a couple of beers in the beer garden, which was a blast! It was a little chillier than most years, but thankfully I had warm clothes in my drop bag! Later that afternoon we enjoyed hanging at the hot tub in our condo and then Margarita's for dinner! On Sunday we hiked to Corona Arch before heading back home. 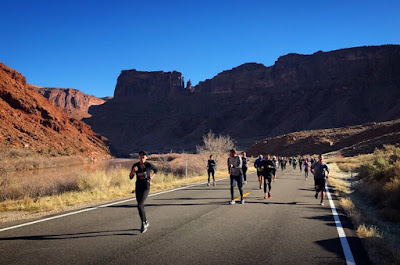 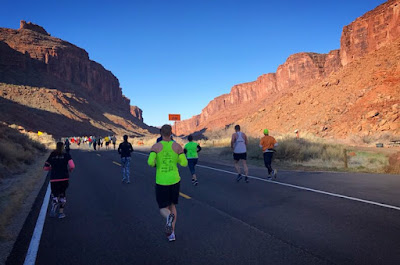 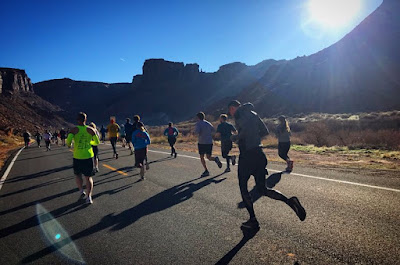 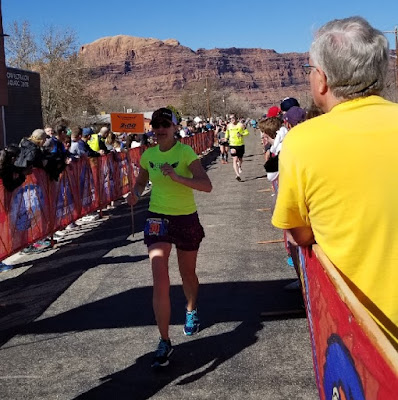 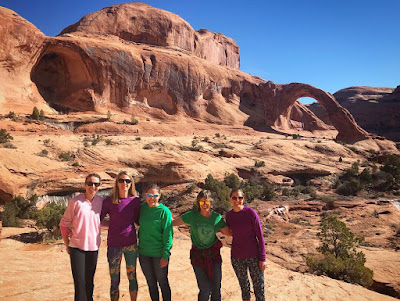 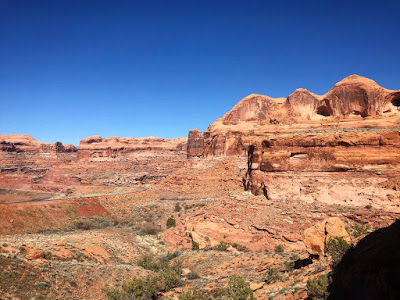 Behind The Rocks 30K

For Behind The Rocks I decided to come back Saturday after the race because I had a lot going on, so I ended up driving to this one myself. I had some things to do Friday morning, but I was still able to get to Moab with enough time to go for a short run/hike. After trying to decide which trail to do, I remembered that I have always wanted to check out the Park Avenue Trail in Arches National Park and figured it would be a good length. It's only 2 miles round trip and isn't very far into Arches, so wouldn't take too much extra driving time either. Well it ended up being perfect - while it would normally probably be a very pleasant hike, it was extra special this time because of all the precipitation the area has gotten - a lot of the hike is along slick rock that actually had tons of water run off going across it - it was really neat. I spent too long enjoying myself and taking pictures before finally heading into town for packet pick-up.

After getting my packet, I met up with the group I was staying with - fellow Moose Herd Ambassador Lynne and a bunch of her friends from Colorado Springs. After we stopped by City Market and then checked out our Condo, we headed back into town for dinner at the Blue Pig - one of the few restaurants in Moab I hadn't been to yet. After that, it was back to the condo for an early night so we could get ready for the race the next day.

There were two people doing the 50K, two people volunteering, and four of us doing the 30K. The 50K and volunteers headed out a little after 5:00 and then those of us doing the 30K left around 6:30. The race didn't start until 8:00am, but it requires navigating a rough dirt road that's pretty slow going and takes about a half hour. We still got there with plenty of time though and mostly hung out in the car where it was nice and warm.

Finally the race started and I warmed up a bit. I had heard the 30K is pretty runnable for most sections, and so with this being on my longest training runs for Boston I decided to try and keep my pace up for as much as I could despite this being a trail race (I'm not fast on trails). Once again, since it's been a couple months, I'll let my pictures tell more of the story, but overall I think the race went pretty well. There were a couple of technical sections, but overall I'd agree that the 30K is pretty runnable (however, if you sign up for the 50K or 50M there are definitely some big technical sections) and I had a pretty good time overall, finishing in just under 3-1/2 hours. The mileage came in at 18.8 miles, so I ran an extra 1.2 when I got done, so I could have a 20 miler pre-boston!

Post race I just hung out and waited for all of our group to get done. This weekend was once again a little chilly (it was great running weather, just a bit cold for hanging out outside after), so I was pretty grateful that they had a couple firepits out to hang around at! Once everyone else got done and we had some time to relax, we headed back to the condo and I hit the road back home. 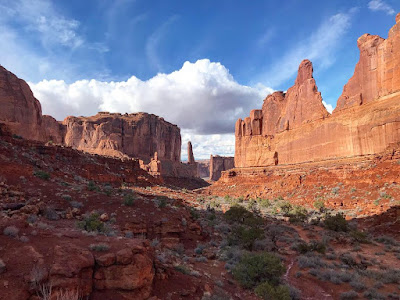 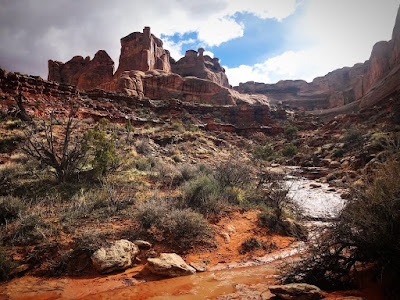 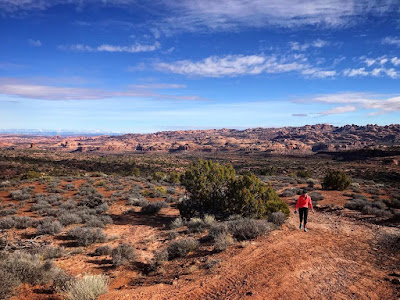 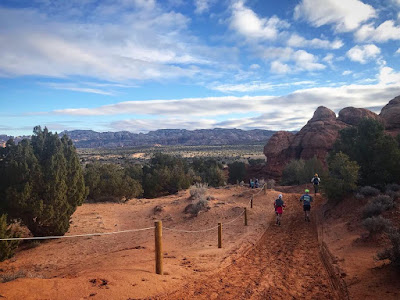 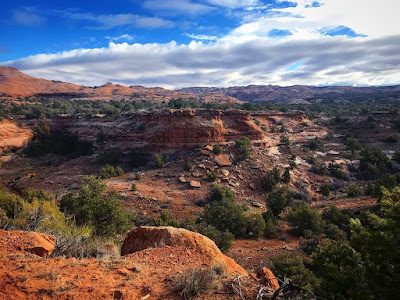 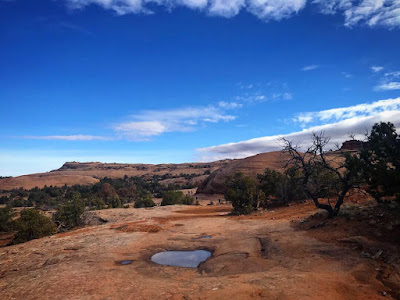 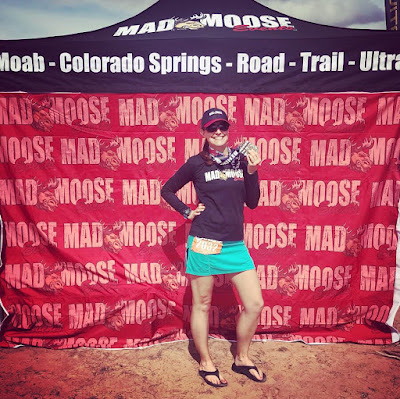