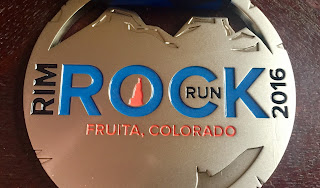 The Rim Rock Marathon is one of the more well known events in Grand Junction, and in my opinion, one of the best. It showcases the Colorado National Monument by running through it - starting on the Grand Junction side and ending in Fruita. I ran it last year for the first time, and while it was TOUGH (it has over 2000' of elevation gain in the first half of the course) and slow-going, I loved it and knew I had to do it again this year. That being said, I was definitely open to doing the Marathon Relay option as opposed to the Full Marathon.

So...when the race officials announced over the summer that they would be offering a new Downhill Half option, where you run the second half of the course, losing 2000' of elevation gain in about 13.1 Miles, I knew I had to do it! I have a love-hate relationship with uphill races (love the feeling when I'm done), but I have a pure love-love relationship with downhill races. They are seriously, SO much fun. You literally are flying, at a pace far faster than you could sustain on flat ground. It's fun. Seriously, try it sometime if you haven't!

I also love that this race is local, so there's not a whole lot of logistics to figure out. On Friday night before the race I drove to Fruita for packet pick-up (although I could easily go Saturday morning as well - but for a 10 minute drive, why not get my bib the night before?), and then Saturday morning I was up a little after 6 and out the door by 7 to catch the 7:30am shuttle that would take us up to the top of the Monument.

My only hiccup was that when I was about half-way to Fruita, I realized I forgot my Garmin! I've never done more than a 5K without a watch, so I was a little nervous to be flying blind for 13.1 miles in a race...but ohwell, I guess I would just have to see how it went! (In all fairness, I probably would have had time to run back, but it made me a little nervous, I would've been getting back to Fruita right as the bus's were taking of - and you never know if they will leave on time or not!).

I hopped on the shuttle and we made our way up to the start of the race, which was at the Highland View overlook in the Monument. Once at the top, I quickly got into the bathroom line (there were 3 porta-potties for 200 or so runners...not cool), and then found a few other local runners to talk to while we waited for the start. It was in the 40's, but cloudy and drizzling rain. This would actually be perfect running weather, but it was definitely chilly to start! Right before 9am we lined up at the start and headed off!


{NOTE: Because I was running this for time, I did not take any pictures. For some really good course pictures, check out my post from last year, where I took tons!}

From the very get-go it was a very steady downhill. Not super steep, but a pretty decent grade to keep me moving. Based on The Other Half from two weeks prior, I was hoping for under 1:50. I had ran 1:55 at that race and I knew this was a much faster course, so I had a pretty good idea that I could swing that... but now, without a watch I was just going to have to run hard and hope for the best!

The first mile marker was definitely off, as we passed by it only 5 minutes or so into the race. After that they seemed to feel more accurate (of course I didn't know for sure without my GPS). I felt like I was running at a pretty good pace for Miles 1-6, which are the steady, not too steep (but not that gradual either) miles. I tossed my long sleeve about 2 miles in and kept at it. The other nice thing about the Half Marathon portion of this race, is that the best views of the park are in the second half - so you still get to run by the Coke Ovens, Kissing Couple, and Independence Monument (rock formations).

Around Mile 6 is when the fun starts! Very steep, winding downhill from the Visitor's Center to the Entrance of the Colorado National Monument. During this section you get to go through two tunnels as you make your way down. It was SO. MUCH. FUN. Seriously, if you like downhill running, this race is for you. I loved it. I did my best to keep my pace up as fast as I could, just hoping I was running an okay pace.

Once you get down the steep section is when it gets a little tougher. You've got about 3 Miles from the Monument exit to downtown Fruita. You go from having an entire traffic lane blocked off, to being coned off on the side of the road... but the good news is that it is still mostly downhill. Mile 11 was still pretty speedy, and then the closer you get to Fruita the more it flattens out. Once I hit 12 , I knew I was almost there, but I also knew it was going to be tough. You have to run over the Highway which, while not that much elevation gain, can feel like a lot when you've been running downhill for 12 1/2 miles.

Nevertheless I did the best I could, got to the top of the bridge over I-70, and then tried my best to pick up my pace. As I rounded the corner, I could see the finish line. The clock read 1:40:XX, so I sprinted it in as best as I could, finishing in 1:41:44 - WAY faster than I had predicted.

After I finished, I was mostly spectating and cheering local runners into the finish, so I didn't partake in a lot of the post-race festivities, but this race does seem to have a nice finish line area with beer (and a free pint glass for all finishers - new this year!), some food, and hot soup. After we spectated and saw all of our local runners come in, a few of us went and got pizza at The Hot Tomato (best Pizza in the area!).

So, as I mentioned above, I really do love this race. I am constantly torn between my love for trail running (which I'm not very good at, but enjoy more), and road running (which I am slightly better at, but which has a very different atmosphere as it is always more competitive and thus less fun for me), but I love that this race is a road race, but has some amazing views similar to trail running. I honestly think this is the best event in the area and I highly recommend it if you're looking for a good race.

The addition of the Half Marathon was a very smart move by the race committee. This is a fundraiser for the Colorado Mesa University Track & Cross Country Teams, and for the first time ever, the race actually sold out. The Full Marathon has always been gorgeous, and I'm sure I will do it again sometime, but adding the Downhill Half just attracts a lot more runners. Half Marathons are much more attainable for a lot of people, and it being downhill as opposed to uphill, also appeals to a lot of people as well (although I will warn you, this was VERY downhill, so if you have trouble running downhill, be prepared!). I really hope that with the addition of the Half Marathon, this event will continue to grow and start attracting more people from all over the state!

The SWAG was also awesome this year - nice finisher's medals (although I actually think I like last years better because they were shaped like Independence Monument), a Pint Glass (new this year - loved it!), nice shirts, and pretty good finishers line area. My only wish is that it would actually be warm enough to enjoy the beer... of course, being in November, I'm not sure that's going to happen (plus then it would probably be warmer than I like for racing!).

My only major complaints are: 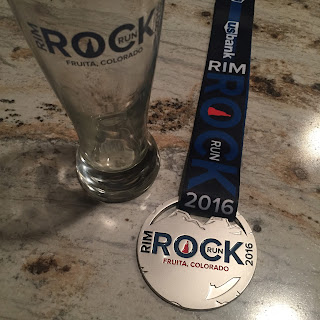