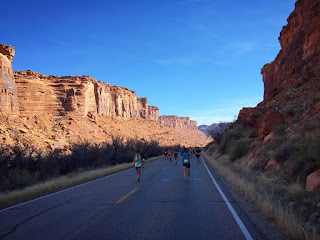 Ahh, another year at the Canyonlands Half Marathon. I don't know what it is about this race, but I just love it. From the nostalgia of it being my first Half Marathon, to the beautiful peacefulness of the canyon you run through, and even including that horrible, terrible stretch from Mile 11-12, it's still remains one of my favorites! Every year I debate doing it again, and then every year, there I am...registering for it again! This year was no different, I was once again going to skip it, but low and behold as soon as they sent out an email saying that this was going to be the last year it would be a fully closed course, I just knew I HAD to do it!

My friend Kellee was once again heading up for it as well - she's ran it every year since 2013, while I've ran it 4 times since 2013 (I missed 2014 when I chose to run an Ultra in Moab the weekend before), and the last three years we've made sure to meet up for the race!

This year, I'm trying to be a little more budget conscious with my racing, so I opted to stay home the night before and drive up in the morning. It always sounds rough, but it's actually not too bad - I got up at 5am, was out the door by 5:40, and made it into Moab by 7:15 - perfect timing for pre-race packet pick-up which went until 7:30. After I got my packet, I drove over to the bus pick-up and waited a few minutes to meet up with Kellee before we made our way up the canyon to the start of the race.


The weather forecast for this year was the hottest it has ever been in the four years I've ran this: 2013 was PERFECT with overcast skies and high's in the 60's; 2015 was hot, but high's in the 70's, last year was also hot with high's in the 70's, but the wind kept it cooler, albeit at the cost of being windy). This year the forecast was for high's in the mid-80's and no wind... I've said it before and I know i'll say it again, I do NOT do well in the heat. Nevertheless, I also knew I wasn't going to really "race" it this year, so I wasn't as concerned as I would've been had I been gunning for a PR or something.

In fact, I wasn't really sure what pace I wanted to run this in at all. I had put a lot of training into the Houston Marathon back in January, including a decent amount of speedwork. But after that, I spent the next two months doing a whole lot of nothing. Don't get me wrong, I've been running, but just haven't had any specific goals. It's actually been kind of nice - just running what I want to run. Nevertheless, I know I typically get into a little bit of a "racing" spirit once I get going, so I decided about 30 minutes before the race that I would go for sub-2:00 hours. I knew this would be challenging enough that I would have to put in some serious effort, but not so challenging that it would be miserable, especially with the heat.

After sitting around in the canyon for close to two hours (yep, be prepared to be bused up super early if you run this race, and be prepared to be COLD while you wait, even if the high says its going to be HOT), we finally made our way over to the starting line to get ready. I shed my extra layers into my drop bag, and then tried to squeeze my way up to the 2 hour pace group. If there's one thing that's slightly annoying about this race, it's that the pacers stand way too close to each other, making the start line insanely difficult to work your way through (I always go back too far, and then realize I'm back by the 3 hour pacer and it's pretty difficult to work my way up). 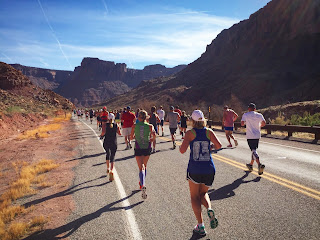 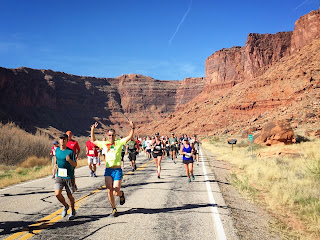 A few miles in and I remembered that I had wanted to make sure to get pictures, so I made sure to pull of the road a couple times and snap some quick ones. Around Mile 4 I saw my friend Jan and chatted with her for a few minutes. By this time, we were no longer in the shade and it was definitely getting HOT. 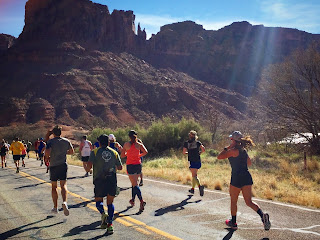 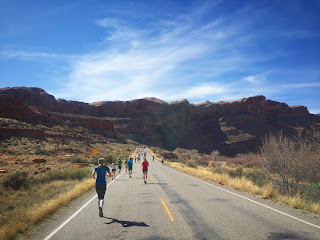 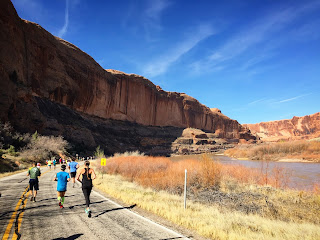 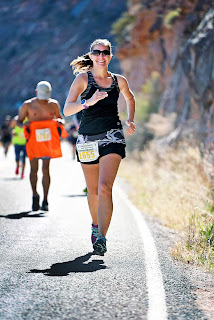 This is when you exit the beautiful, traffic-free canyon, and get to run alongside a stretch of road that leads into Moab. Because it's the main road into Moab, they can only "cone" off part of the road, so you're running right next to a lot of traffic including lots of big trucks. This year, I swear it felt like the temperature SOARED 10+ degrees the instant I got onto this stretch. Nevertheless, I continued on, trying not to let my pace slip.

With about 1.5 miles to go, my friend David, who had paced me at the end of The Other Half last fall, was here again this year, and met me to pace me in for the end of this one too (he had already finished "officially" pacing the 1:30 group... yeah, that's a 6:52 pace...that he just ran casually.., and then came back for a few more really slow miles with me!). He's a really good pacer and knew just what pace to run right in front of me to get me to pick up my pace... although this year I struggled a little more than last fall at picking my pace up - I did pick it up but not as much as I had hoped - running Mile 12 in 8:26. 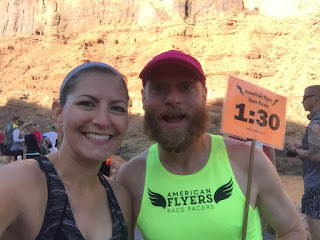 Right after 12, you turn off of the terrible stretch, and get to run on back neighborhood roads to the finish line. I tried to increase my pace as much as possible, but the heat was really getting to me by this point, so the most I could muster was an 8:18 pace, which I ran Mile 13 in. I then tried my best to run as fast as I could through the finisher's shoot, which was a 7:46 pace (for .1) - not as fast as I like to finish in, but I could definitely tell I gave it my all...because the second I crossed the finsh line and stopped, I felt like I was going to puke... (that's how you know you had a good race - I know, lovely). Thankfully, I didn't end up puking, and just had to take a few minutes to cool off. I ended up finishing in 1:53:55 - not bad considering I was just going for under 2 hours!

The one good thing about it being an unseasonably warm day, was that it was the perfect weather for sitting and hanging out in the beer garden! This race gives you up to three free beers with your race entry, so I had a great time sitting with some running friends and having beer (I only had 2 though! I did need to drive home later that afternoon!). 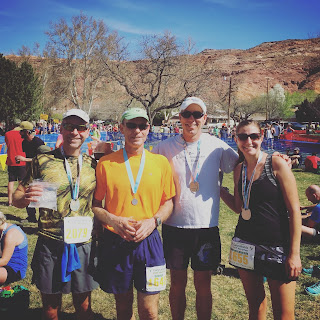 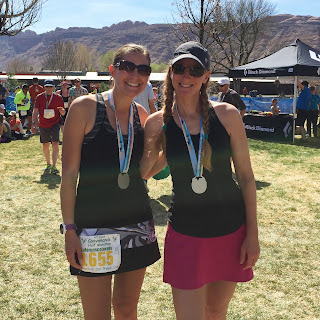 After relaxing in the beer garden for a bit, I went and had lunch with Kellee and Dan at Zak's - which has been our tradition for post-race lunch the past three years! After filling up on their pizza and salad buffet, I then hit the road and headed home from another great year at Canyonlands!

One other tradition about this race that I now have, is going for a great race picture! Haha, no really, it was actually just kind of a funny coincidence that I got great race pictures in 2015 and 2016, so this year I had to try for one again (since I also now know where the photographers typically hang out). This year's isn't quite as good as the last two years, but still not too shabby! :) 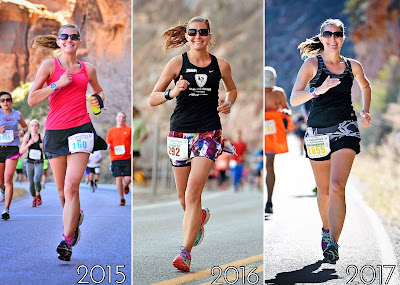