One of the side effects of running (especially for people who just jump into it and see how much you can do in a short period of time) is that you tend to start believing anything is possible. Since I started running 3 1/2 years ago, I've kept adding all of these ideas, goals, and dreams to my plate. Now, there's nothing wrong with having big dreams, but it can make life a little tricky sometimes. Here's the thing: I'm starting to get older (I know, I'm as shocked as you are). And the Hubs and I do want to start a family at some point. Unfortunately running long distances at high intensities doesn't really work hand in hand with that. So, last year when I was planning out my 2015 goals, I knew I had to make a choice. I had 2 goals I wanted to do before having kids: running Boston and running a 100 miler. Lofty yes, but doable with enough work.

Unfortunately, despite my best efforts, I did not get my Boston goal last year. So the question was posed for 2016 - continue working towards the BQ, or move onto Goal #2 of attempting a Hundo? It was a tough decision. After MUCH deliberation, I've decided on a few things:

I worked hard to get that BQ and after all that work and not getting it, what did I have to show? Honestly, not much. I missed out on a lot when I focused so intently on road running. I got burned out. I barely did any trail running, which, while it is NOT my strong suit, I enjoy more than road running. Trail running always leaves me remembering why I run. Road running is much more short-term goal oriented and coming up short of those goals, is tough mentally. With trail running, at least at the end of the day I've spent time in nature (which, I know it sounds cheesy, but really does restore the soul).

So where does that leave me? Well, I've decided to give the BQ one more shot this spring. Let's face it - I don't run trails that much in the winter anyways, so I may as well focus on roads for one more training cycle. Therefore I will be running the Salt Lake City Marathon on April 16th with my goal to BQ.

However, that being said, running marathons for time is hard. Like, really hard (way harder than just running them for fun). So, if I do not get the BQ, I will swallow my pride and move on to bigger things (literally). I'm sure a BQ will happen someday if I continue running throughout my life. It's time to stop focusing wholeheartedly on it. It's just one race. And does running a 3:34:59 marathon really make me more of a runner than running a 3:35:01? (That's rhetorical, but if you must answer, make sure it's a "NO").

After said April marathon, I will start getting back into trail running with the intention to attempt* (and hopefully finish) a 100 miler before the end of the year. The plan is to attempt a late summer or early fall race.


(I say "attempt" because SO many things can go wrong in a 100. That being said, I will be training for this and I will go into the race very committed. I do not plan to DNF unless absolutely necessary - I just want to keep it in mind that it COULD happen).

Which brings me to my next problem - picking a 100 to try. ONE. HUNDRED. MILES. is going to be hard enough on it's own, let alone factoring in traveling, elevation, terrain, availability of pacers, etc. So needless to say, there are a lot of things that go into choosing a 100 mile race.

Ideally, I would love to stay in state. I love Colorado and would like to run on familiar territory. It would also make finding pacers and having my family there much easier. Which is where Leadville comes in. As cliche as it probably is, ever since reading Born to Run I've wanted to attempt the beast that is the Leadville Trail 100 (LT100). I know it sounds crazy that I would want to attempt this as my first 100, but, as surprising as it may sound, Leadville Trail 100 is actually one of the easier hundred's in Colorado (it is by no means, "easy", but easy in comparison to other 100's offered in the state). I also ran the Leadville Trail Marathon in 2014 and really enjoyed it. I generally don't have many issues with high elevation and that is one of the main reasons LT100 got it's reputation for being one of the toughest. My biggest issue with LT100 would be the time cut-off's. At 30 hours, it's not strict for most 100 milers, but it is for a mountain ultra with over 17,000' of Elevation Gain over the course. With all that said, I still want to attempt this beast someday.

So, at the beginning of December, I did the crazy. I entered the lottery for the 2016 Leadville Trail 100.

At first I was terrified. However, the more I waited and waited and waited for the lottery to take place in January, the more excited I got. What if I got in? Obviously, I'd have some major work cut out for me. But I love spending time in the mountains. This would force me to hit the trails almost every weekend all summer. It would be tough, yes, but worth it.

Just as I was getting really excited about it, the lottery was announced yesterday. All that time spent planning things out...yeah, it was for nothing. I did NOT get in. 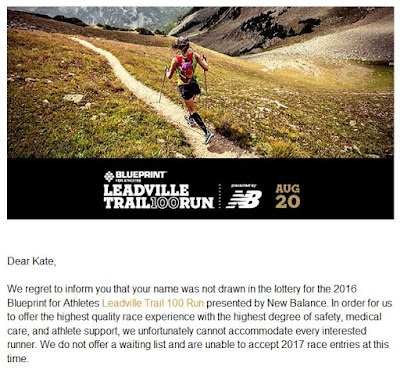 Here's the thing: when I first hit the submit button on my lottery registration on December 2nd, I started shaking. I wanted to "not get in" at that point. But, as I mentioned above, the longer I waited, the more excited I got, and so I was beyond bummed when I got that rejection email. This really was the only Colorado hundred miler that I had a strong draw towards (don't get me wrong - we have some other AWESOME options - I just had a strong connection to that one). I know when I really think about it, Leadville is probably a much better race to attempt once I have a little more experience under my belt, but it was still a tough reality to accept.

So, I guess that just means I need a Plan B. Deciding what that Plan B will be is another story...one I am still working on, but for now, here are the top contenders:

I still have NO IDEA which one I'm going to go with (I change my mind about every hour), so stay tuned!