I ran the Bolder Boulder last year for the first time. It is the second largest road race in the United States (pretty sure anyways), so it's a lot of fun! It's also close to my hometown, so logistics are fairly easy to work out. I wasn't going to do it again this year, until they offered really good pricing in February if you referred a friend. So I decided, what the heck (the only reason I wasn't going to do it, is just because May is ALWAYS so busy and making the 4 hour drive over the mountains can be a pain).

Anyways, as busy as my month of May was (I was basically gone every weekend - 1st weekend for the Colorado Marathon, the second weekend for my friends wedding, the 3rd weekend for the Black Canyon Ascent, and then this!), it actually ended up working well that I made this trip because I was able to get an 18 mile training run in on the Revel Rockies Marathon course. As you may remember, Revel Rockies Marathon is on July 19th and is going to be my big goal race for the year (the one in which I, gulp, attempt to BQ). Since I am going to have a lot of pressure weighing on me for that race, it helped immensely that I was able to run such a big part of the course and really get a feel for what I'm in for! The training run ended up going really well (aside from leaving me insanely sore for the next few days)! Here are some pictures: 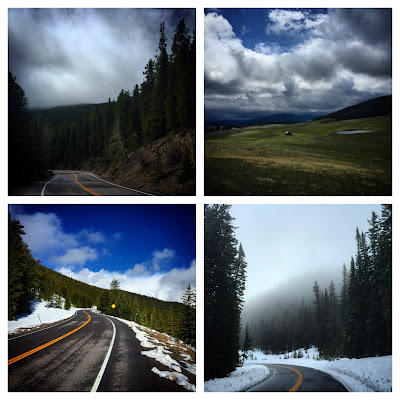 So that was on Saturday and took a good portion of the day. On Sunday, I slept in and then caught up with a few friends before heading to Boulder to go to the Race Expo for a little bit. The Expo was okay - it didn't feel like there was as many vendors as last year though - but maybe it was just that it was later in the day, on the last day? Anyways, the only major thing to note at the expo was that I got to try out a Roll Recovery - which was AMAZING...especially considering my legs were basically shot from the training run the day before (the 18 miles was all downhill. Downhill = serious quad soreness along with other random muscles I didn't even know I had). So anyways, the Roll Recovery is awesome... it's also pretty pricey at $120. They were offering a $20 discount as an expo special, so I sat there self debating it for quite awhile, before finally deciding - YES! I'm going to get one! So I walk back over to buy it...and they sell out. To the person in front of me. Are you kidding me? I guess it wasn't meant to be. Although I am still sad about it.... (currently taking donations for a Roll Recovery FYI...haha j/k). Anyways - the next expo I see it at, it's MINE!

Oh and we stopped and got cookies from Boulder Baked...A-M-A-Z-I-N-G (haven't had that since I worked in downtown Boulder 4 years ago). 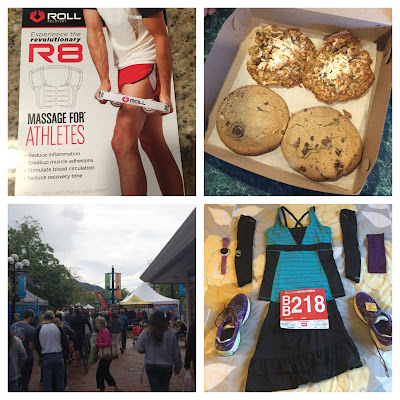 Anyways - back to the race (you know - the thing this blog is actually supposed to be about). We took the RTD down (best way BY FAR to go if you're commuting from the Denver-Metro area) and got there about 6:30am. I qualified for the "BB" wave this year with my awesomely fast time from the Moab Winter Sun 10K...but considering how insanely sore my legs were, I knew there was no way I was going to be running the Bolder Boulder that fast. So I opted to start with my dad in the EJ wave. It only started 20 minutes after my wave at 7:20am, and worked out well since we didn't even make it through the bag check and bathroom lines until about 7:05. We said good bye to my mom who was walking in a later wave and then got ready to go! 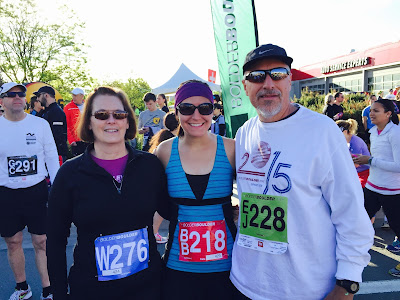 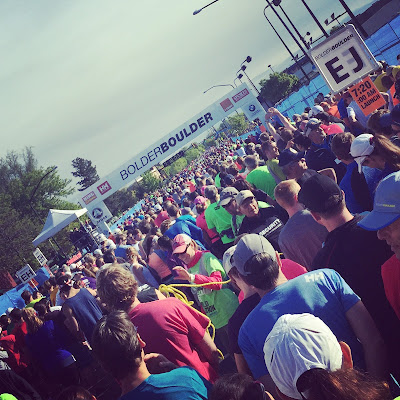 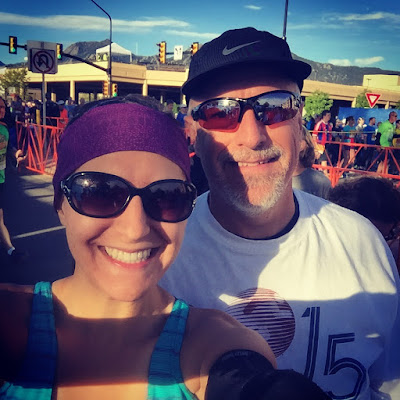 And right on schedule, we were off at 7:20! I honestly wasn't sure what I wanted from this race. I knew I wasn't going to PR, but I also wanted to put some effort into it. So I decided to ease into it and give myself a chance to warm-up a bit before deciding.

After the first mile, I decided I would try for negative splits (running each mile faster than the mile before it). That was going to be my main goal for the race. Sounded good. I think it was during this mile that I spotted several ladies wearing Skirt Sports and when I went to say something to them, realized it was Joy - another Ambassador Captain who I had yet to meet in real life! I said "Hi" and then picked up my pace a little so I could keep with my negative split goal.

The first 2 miles were fairly accurate with my Garmin, but then they started getting off as the race progressed (I totally understand that courses and Garmin's can be different due to all sorts of factors, but that doesn't make it any less annoying). 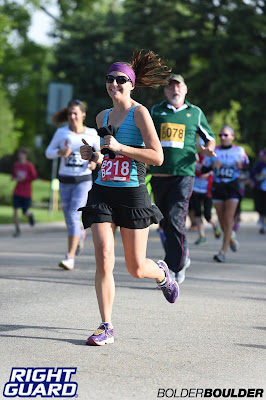 Somewhere in here are the people that give out Doritos. I thought about getting some this year, but I was on a mission! Gotta get those negative splits!

I had officially warmed up by now and was really picking up my pace. Unfortunately, I could totally feel all of my sore leg muscles hurting. I knew this was probably a bad idea. Oh well, I was committed now. 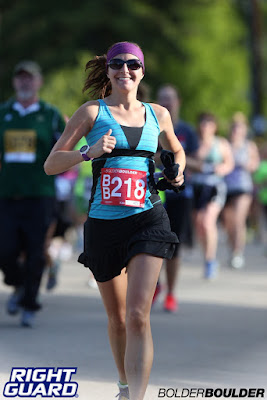 You run downtown for a bit here before getting onto Folsom and heading to the CU Stadium. This is always my favorite part because it means you're almost done. I picked up my pace a lot once I got on Folsom and barely managed to negative split mile 6 (although I only got the negative split on my Garmin and not according to the timing mat).

Right after mile 6 is the hill of all hills!!! Honestly, it's actually not that bad, unless you picked up your pace to 7:30's for the previous two miles and your legs are screaming at you from running an 18 mile, 3800' descent run 2 days prior.... anyways, my pace slowed incredibly on this part...but I decided I didn't care - my Garmin had the negative splits for the first 6! I kept at it, got into the Stadium for the final push and finished in 51:03! 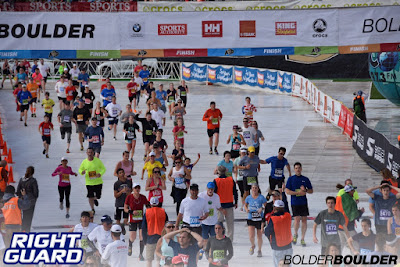 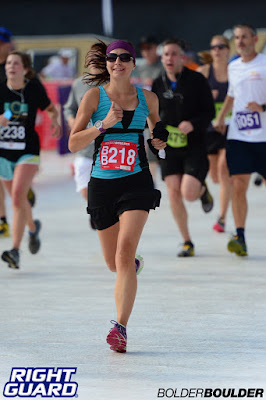 I had originally hoped to go sub-50:00...but that was before my sore legs, and so I obviously didn't do it. Had I picked things up more in the beginning I could've, but I don't think that would've been the smartest thing - especially considering how achy my legs were when I tried running again the following day (yep - they were mad at me for running sub-8:00 miles on torn up legs).

After I got done, I waited for my dad, who finished about 5 minutes after me, and we got our goodie bags and beer (I gave him mine - I just can't do Beer at 8:15 in the morning - especially when it's not that warm out, and then I convinced him to wait in line for a massage with me. I had read the day before that they were offering free massages. Since I didn't get my Roll Recovery, I thought this was the perfect substitute. And it was....an hour and half later when I finally made it through the line (all for a 5 minute massage...eh it might have been 7 or 8 minutes?). 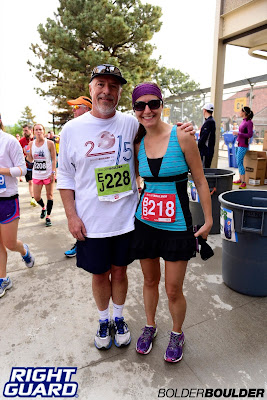 Waiting for the massage took a ton of time, so after that we didn't have too much longer to wait for my mom. We went and walked around some of the vendor booths - which was just a mad house (don't recommend that), before meeting up with my friends Chere' and Dante and then sitting in the stadium stands for awhile watching people come in (and then watching the Elites!!). 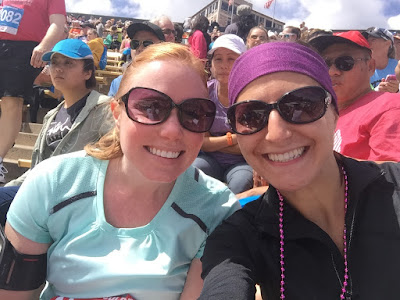 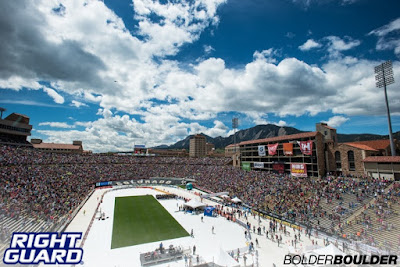 
So overall this was a good Bolder Boulder experience again. The weather ended up being great despite myself being VERY worried (it had rained almost all weekend). Someday, I would love to do this race and actually "race" it. Because it's such a big event, they give out awards for the top 15 finishers in every age group (and every age is an age group - so just Females, Age 27 is an age group). Looking at the results, if I truly, full out raced it, I think I could borderline make top 15 (it would be close - but it's possible)...so maybe next year?? It depends - every year I book myself solid for the month of May and every year I survive it, but barely. So we'll see. It's a very fun race and I highly recommend running it, at least once! It's pretty incredible to watch people just keep coming into the stadium - I mean thousands and thousands and thousands of them! It's also pretty interesting to watch the Elites - they have it televised in the Stadium and then you actually see them finish - very cool. There weren't any big names (that I knew of) like last year (last year they had Shalane Flanagan, Deena Kastor, and Ryan Hall), but it was still very interesting AND Meb was here this year, although I still never figured out why (he wasn't racing, but he was there - I think because Sketchers is a big sponsor, and he's sponsored by them? But again, not sure - they showed him on the screen and he waved!).

WOULD I RUN THIS AGAIN:


Again - please vote for me in the Runner's World Cover Contest: http://coversearch.runnersworld.com/entry/610

Thanks and Happy Running!