Mountain To Valley Half Marathon 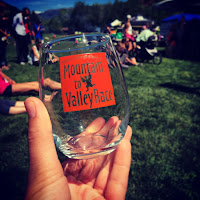 I signed up for the Mountain To Valley Half Marathon in March after a friend mentioned it and I looked it up. It was mostly downhill, and I'm in serious downhill training right now, so I figured this would be a good training run, and a good opportunity to test how my speed is coming along on a downhill course. Truth be told, while it WAS downhill, there were some nice hills mixed in, that may have looked tiny on the elevation profile, but did not feel tiny when running them. This race was fairly small, so not quite as organized as I would like, but overall it was a fun event.

Three years ago (can't believe it's been that long), my mom and I met up in Glenwood Springs for a girls weekend, and we've been talking about doing it again ever since, so I decided this race would be the perfect excuse! They also had a 4 mile option that my mom could walk, so it worked out perfectly! We both got our excercise in and then were able to spend the rest of the weekend relaxing at the hot springs and eating good food!

I had left work early the week before to drive to Denver, so I figured I should probably stay until 5:00 before heading to Glenwood. My mom left early enough to get there around 5:30 and pick up our packets, and then I met her at the hotel around 6:30 when I got in. We stayed at the Glenwood Suites - which is on the west side of town. It was pretty nice and allowed me to figure out some of the back roads around Glenwood. We ended up just having dinner at Subway (per my request because I'm picky before my races), checking out where we needed to be for the race the next morning and then calling it a night.

We got up around 5:30 on Saturday, got ready and then grabbed some breakfast before driving over to the park the race was at. We got there with a little extra time before I needed to get on the bus, so I decided to stand in line for the bathroom - which I am SOOO glad I did (there was only 1 porta-potty at the start line...for 200 racers!?!). I then made my way over to the bus and found Heather - a friend of mine who was racing as well, so we rode the bus up together.

The bus ride was LONG (they always are on those back mountain roads). Despite leaving at 7, we didn't make it to the start line until about 7:40. Once we got off the bus we found my other friend Cheryl and her friend, so we stood in line for the bathroom with them (which was a very long line, again with only 1 bathroom...I had a feeling this wasn't going to go over well for most people - thankfully I didn't have to go). Around 7:45, I did a little bit of a warm-up while they were still in line. Around 7:55, everyone in the bathroom line ended up wilder peeing and then we all jogged over to the start line, which was a ways up the road. The event was not chipped timed, so Cheryl convinced me to start at the front eventhough there were sure to be some faster people than us (but it was a small enough race, so it did work out - and I'm glad I did this, since their time was already slower than my Garmin). 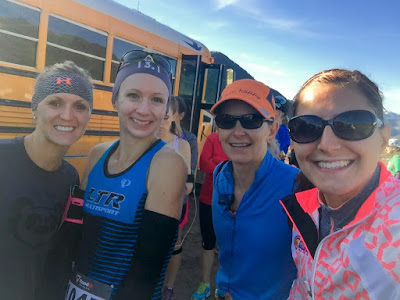 The race was set to start at 8:00, but we ended up starting a little late. They had a group of runners participating who pushed individuals with disabilities, which was pretty cool, so they started first, and then we started about a minute behind of them. The race starts out with a gentle downhill, so I started at a moderate, steady pace. The course gradually got steeper over these first few miles until turning onto a dirt road just before mile 4 where there was an aid station followed by the first and toughest hill of the day. I skipped the aid station since I had my handheld and powered up the hill as best as I could, slowing a bit, but still getting in an 8:45 mile (my slowest of the day).

After the big hill, the course becomes rolling hills for the remainder of the dirt road section (about 5 miles). Despite still being overall downhill, I really had to power down the "downs" to make up for the "ups." Overall though, I was happy with how I was handling the uphill sections.


Shortly after mile 9, the course turns onto "Four Mile Road" - taking us back onto pavement where the 4 Milers started. From here until we exited this road was all downhill other than 1 short but steep hill at mile 11. I did my best to really try to make up for some of my slower miles here, picking up my pace by quite a bit and passing quite a few people. 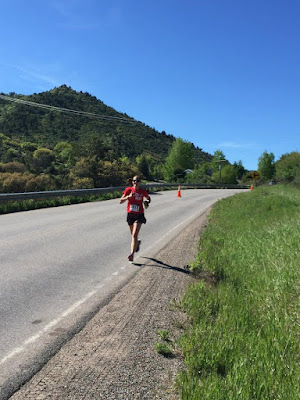 Around mile 12.5, you exit 4-Mile Road and run towards the park where the finish is. I had been soaring downhill up to this point, so when I got on this road and it turned to flat road, I really struggled. Thankfully it wasn't too much further and I was able to finish with a 2 1/2 minute PR and third place in my age group! 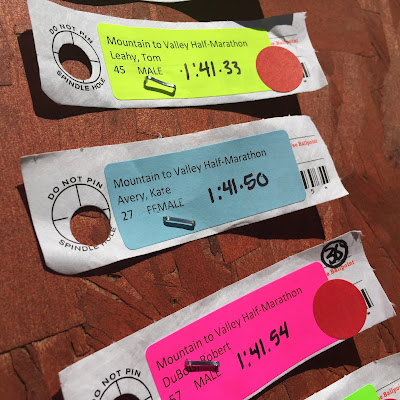 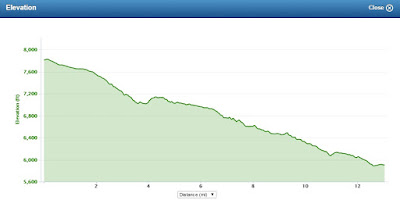 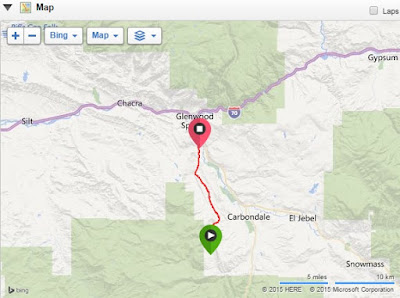 Overall Thoughts:
This was a nice, fairly close to home race on a beautiful course (FYI - I didn't get any photos on the course since I was running for time so all of the course photos I posted were taken from the race's Facebook page). I feel like I ran a really well executed race - I was able to pick up my pace a lot in the last few miles (with the exception of the last 1/2 mile when I started to slow) and get a pretty good PR - leaving me feeling a little more confident about my next half marathon in June and slightly more so for my goal full marathon in July.


Would I Run This Again?
Maybe. It's a beautiful course and fairly close, so I could definitely see running it again - but only if it fit into the schedule nicely. I wouldn't go out of my way to run it again.

The Rest of the Weekend...

After the race, my mom and I headed to the hot springs for several hours that afternoon followed by dinner downtown and then back to the hot springs that evening. We didn't have much planned for Sunday, so we ended up doing a last minute trip down to Aspen to see the Maroon Bells (this was a great time of year to go because the road going to the Bells was open to the public, but only for a few more weeks! It was a great trip and I definitely want to try and make it an annual thing (whether or not running a race is involved). 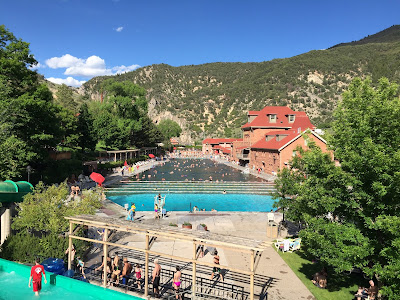 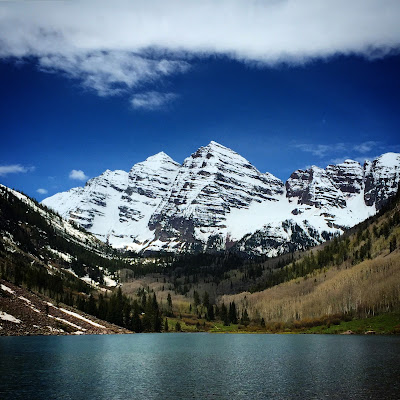 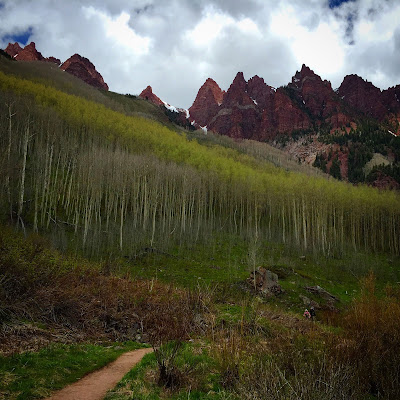 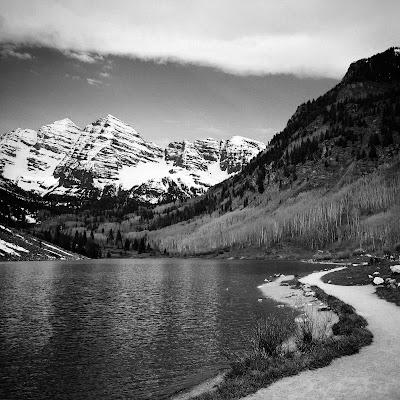 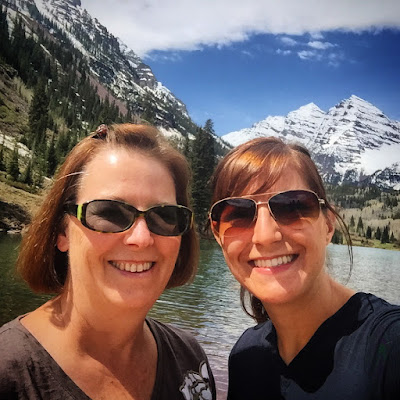 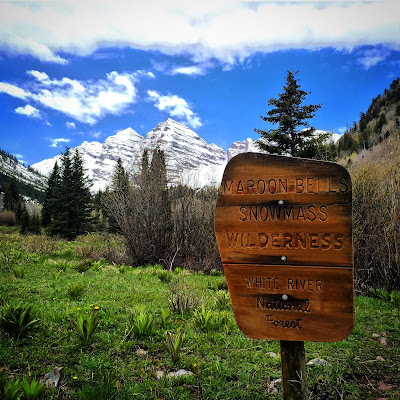