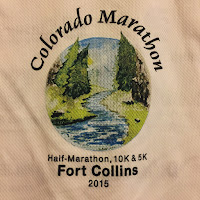 The Colorado Marathon has been on my bucket list for a few years now. Mostly because it's in Fort Collins (I went to school at CSU, and barely ever get up there anymore!). I had also heard it was a good race to try and BQ at because of the downhill. So I decided to sign up last fall, thinking it would be attempt #2 at a BQ (it wasn't, but I'll get into that in a minute). It's a pretty pricey one - about $40-$50 more than any other local marathons, but since it's a Team Beef race, I decided I could justify it, if only once.

I know I've mentioned this in a few places, but not sure if on the blog...but essentially, I didn't think my BQ Attempt #1, 2, and 3 through very well. My original plan when going for my BQ was to try at Phoenix Marathon (#1) on 2/28, again at Colorado Marathon (#2) on 5/3, and then finally at Revel Rockies (#3) on 7/19. Well...that sounds all fine and dandy and like there's plenty of time between #1 and #2 to improve. Well newsflash: there wasn't. To truly full-out race, you need 3 weeks recovery time post-marathon. Plus 3 weeks taper time pre-marathon. That left me with only 3 weeks of actual training time in between the Phoenix and Colorado Marathons. Definitely not enough time to significantly improve. Add to the fact that while I had a blast at Phoenix and was SO happy with my time there, I was exhausted from the structured, 50-60 miles per week training I had been putting in for the months prior to the race. So I ended up changing my plans. I took the weeks in between Phoenix and Colorado easy. And decided to instead, just run the Colorado Marathon as a training run for Attempt #3 (which will now be attempt #2) - Revel Rockies in July. So that's what I did. I went in with the idea of running it "for fun", and just having a good time with it.

And overall, I'm happy with how it went. I ran a 3:54 "easy" marathon (vs. 3:41 at Phoenix) and could significantly tell a HUGE difference in my recovery time needed post-Colorado vs. post-Phoenix. So I think it's safe to say that I made the right decision. I know I was not ready to BQ at Colorado and attempting it, would have only hindered my training rather than helping it. I just hope I have enough time now to really improve enough and strengthen my quads prior to Revel (so they can handle the downhill) to hopefully get that BQ! 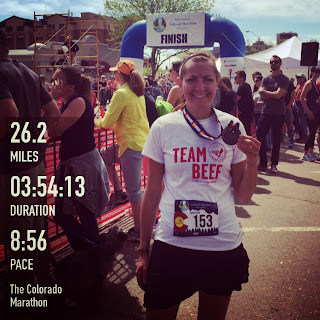 So anyways, keeping that in mind, that I was taking this race easy and NOT going for those two exciting little letters, here is my race report:

I had some prior commitments in Grand Junction Saturday Morning (the end of season 5K for my Girls on the Run team), so I couldn't leave for Fort Collins until a little after11am. It's a 5 hour drive, so that put me into town around 4pm. I checked into my hotel (Best Western Kiva Inn - it was okay), stopped at The Oval real quick for a picture, and then headed to the race expo. It was a pretty small expo, but there were a few booths there, including Skirt Sports, so I tried on some of their new items I'd been eying online, before heading to a grocery store to pick up some breakfast for the next day. After that I just hung out in the hotel for awhile watching TV until Sheva came - a friend I had met through Team Beef, as we had decided to split the hotel room. Once she got there we chatted a little and then I attempted to get some sleep.

I slept off and on before getting up at 3:15 the next morning (these marathons are going to kill me, if only from lack of sleep!), to leave at about 4:15 and head to downtown Fort Collins to park and catch the bus. There was a long line already for the buses (buses ran from 4:15-5:00), so I waited in that for awhile before getting on one. Different from most point-to-point races that have school buses, these were luxury buses. Kind of nice, but at the same time, I have a feeling this is one of the reasons the cost of this race is so high, and I'm not sure it's worth it.

The bus ride was fairly long - it takes awhile to wind up Poudre Canyon. It was about 5:45 by the time we got off the bus. I circled through the bathroom line once and was waiting around (apparently looking pathetic, see below), before spotting Ellen and Kristyn - who I had done a training run with 3 weeks prior. I went and stood around with them and then we all decided to get into the bathroom line one more time. The line was insanely long by this point (I do not think they had enough porta-potties for this race), and we ended up getting through it with about 2 minutes to spare before the race start (cutting it MUCH closer than I like to, especially in a marathon - thank goodness I was running this one for fun or else I would've been way more stressed out about it).


I ran over to the start and got ready to go - starting my Garmin about a minute prior and tucking it away in my spi-belt (I wanted the data post-race, but didn't want to be distracted/enslaved to it while running). The gun went off and I just started an easy pace down the canyon. It was still cool, but the sun was pretty bright depending on which way you turned. The first 15 miles are run down the Poudre Canyon - which was absolutely gorgeous - this was probably the most scenic road marathon I've done in Colorado yet (even more scenic than Aspen Valley). They had aid stations about every 2 miles, which was great (although only one fuel station and not until mile 19 - I was VERY disappointed in that - but at least I knew beforehand and could bring my own).


I chatted with several other runners during this section - a guy from Oklahoma (he was wearing a shirt for Red Coyote Running - a running club/store? that an instagram friend of mine runs for - so we got chatting about that), a girl from Wisconsin (who wanted to do 50 marathons in 50 states - I believe this was #4 or 5), and a few brief hello's to fellow Marathon Maniacs. The 3:45 pace group caught up to me right around the half-way point. I had figured I was running about that pace, but this solidified it for me. I thought about trying to keep up with them, but in the end kept at my own pace (slowly, slowing from them). I also saw Ellen up ahead and worked toward slowly catching up to her (she was easy to spot in a Team Beef shirt). 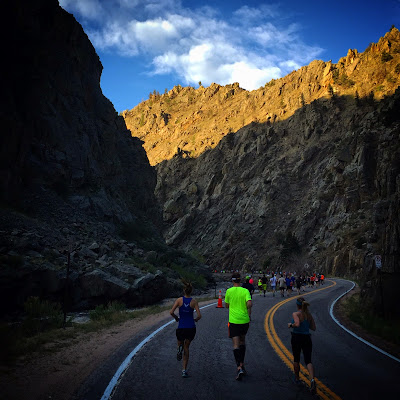 Around miles 15-16 you exit the canyon and start to head towards Fort Collins. The beautiful, gorgeous, shaded canyon with the river is gone - right about the time that you're starting to get tired - which is mentally pretty tough. I'm not sure there's much that can be done about this - obliviously it makes sense to end the race in town, so you kind of have to go through this section. I think the worst thing about it is that the shade is gone, and despite how rainy and cold this spring has been, it was HOT that morning. I caught up to Ellen somewhere around here and we chatted a little - she was having side stitches, so wasn't running as fast as she wanted to - but that did mean I got to say hello, as well as snap this picture of her and Filip - another Team Beef member who I knew from facebook, but had never met in real life. There was probably a solid mile where the three of us were all running in a row...Team Beef Represent!

Miles 18-23 were kind of a blur. I was getting tired, but I wasn't in as much pain as I remember being in at Phoenix by this point (my quads were shot by that point in the race). At Mile 19 was the only aid station with fuel, so I grabbed some honey stingers and kept going. I think it's around Mile 22 (not positive though) that we got onto the bike path - my least favorite part of the course.

Finally, you exit the bike path and get back onto the road around mile 24...but just in time for a HUGE hill. I walked it. I knew I was getting tired, so I just figured, what the heck, I'm walking this. And I did. And it was so nice. Until I had to start running again. That's the thing about marathon's - the more you start walking at the end, the tougher it is to get going again. That's why I didn't stop at all at Phoenix - and why I probably won't allow myself to stop at Revel (which, for me, means wearing a hydration pack because I cannot run and drink from those stupid paper cups to save my life). Anyways, right after the big hill was also about where you start getting into town, which was a nice relief. I tried to pick my pace up a little, but I'm not sure I really did. Finally I hit 25 - I was ALMOST there! At the last aid station, the volunteer was telling us we would all make sub-4:00, which was a nice relief. I kept running and finished in 3:54:13!


So, to sum things up, I did like this race...however, I didn't like it enough to justify it being SO much more expensive than the rest of the local road marathon's I've done in Colorado ($130 vs. typically around $90 for early bird rates). The scenery for the first 16 or so miles was spectacular. I love Fort Collins - although I have to say there was WAY less course support than I expected. Finishing downtown was fun and I got to have my beer in the Beer Garden. We got a finisher's art print which was kind of cool. I'm honestly not sure that they really had much at the finish line, food-wise, other than water bottles. There was an "after party" at one of the restaurants in Old Town, except it didn't start until noon - so we (my parents came up to see me finish!) headed to Beau Jo's instead for some pizza before I headed home (5 hour drive post-marathon on barely any sleep = SO fun, by the way!).

WOULD I RUN THIS AGAIN?

Maybe someday. Definitely not every year, especially with how far it is and the high price tag. If I lived in Fort Collins, I would probably do it every year, but just for the scenery.

P.S. PLEASE take a minute to vote for me in the Runner's World Cover Photo Contest: http://coversearch.runnersworld.com/entry/610. You can vote multiple times (I believe it's every 12 hours).