This past year was filled with so many long races and trail runs, that I hadn't "raced" a Half Marathon since the Georgetown to Idaho Springs Half in the summer of 2013. So after I'd been consistently doing speed work and running high mileage as part of #OperationBQ (translation: "operation run a marathon fast enough to Boston Qualify" - will probably be using this term a lot over the next few months, so better get used to it!), I knew I wanted to race a half marathon prior to the Phoenix Marathon - to give myself a better idea of what I could achieve come February 28th.


Unfortunately, there's not a whole lot of options for Half Marathons in the dead of winter in Colorado, and the few that are around, are of course, all on the Front Range. I had my eye on doing this Prairie Dog Half Marathon - but didn't want to commit until I knew what the weather forecast was going to be - both on the course, but more importantly - through the mountains, since I would have to drive over them to get to it. Thankfully, I checked the forecast the Monday before the race, and it looked awesome - so I went ahead and signed up (and glad I did because it sold out by the end of the week!).

I drove to Denver on Friday afternoon, then had a leisurely day on Saturday - went for a nice run at Davidson Mesa in Louisville (very close to where the race would be the next morning), then spent some time at the Flatirons Mall with my mom before heading to church that evening, and eating burgers for dinner (which worked very well as pre-race fuel I must say!).


The race started at 8:00, and since it was just 10 minutes away from my parents house, we didn't need to leave until 7:15. We headed there and quickly found parking before walking over to the start. I dropped off my donations (they had a raffle with some pretty cool prizes if you donated items to their charity partner), then got in line for the bathrooms. The weather was feeling pretty awesome. I had been worried - the night before the forecast had said 32 at the start, 42 at the end - which left me at a crossroads on whether to wear tights or a skirt with long socks. Luckily, I checked it again the next morning and it had completely changed - it was now already in the 40's before the start - making my decision much easier (and I was so grateful - I ended up being incredibly HOT on this race despite wearing a tank top and a skirt!).

Before I knew it, it was 15 minutes until race start. I had wanted to get a quick warm-up in, so off I ran to squeeze in a little 1/2 mile and get my legs moving. I was still pretty nervous on what kind of pace I would be able to do. My goal was to shoot for somewhere between a 1:45:00 (8:00 pace on average) and 1:50:00 (8:23 pace). Ideally, much closer to 1:45, and given my training, I was pretty sure it was doable, EXCEPT for the fact that this course was pretty hilly by the looks at the elevation profile. I decided I would just go out strong and see what I could do.

After my warm-up lap, I shed my long sleeve and made my way towards the front half of the crowd at the starting line with just a few minutes to spare. Before I knew it, we were off. I was thankful I had somewhat studied the elevation profile, as I knew the first 3 miles were a very slight downhill. So I kept my pace at a steady but hard effort running all 3 at around 7:50 minute miles.


After mile 3, you run through old town Louisville and a gentle uphill began. I tried my best to keep my pace up and ran mile 4 in 8:01. Then the worst hill EVER came. Miles 4.5-5.5 were on a dirt path that officially felt like the biggest hill in the world (okay maybe not the world, but considering the effort I was trying to put into this race, it was SO hard to keep it up). My pace slipped a lot despite still really pushing and I ran mile 5 in 8:27. But wait - the hill wasn't over - despite my best efforts, I had slipped to a mid-9:00 mile. Thankfully about half-way through mile 6 there was a nice downhill which I used to try and make up some time - this allowed me to run an 8:33 for mile 6 - my slowest of the day, but still pretty good considering.

Unfortunately the downhill subsided and it was back to flat / gentle uphill - but at least I had caught my breath for the most part. I was definitely getting tired, but there was light at the end of the tunnel! I ran a 7:53 for mile 11. I slowed a little in mile 12 - running an 8:04, and then really pushed myself for the last 1.1. The course looped around, but ended with the same stretch we started with, so I knew how much further I had - this allowed me to really start pushing and I ran mile 13 in 7:46, then sprinted the last .1 at a 7:22 pace, for a, drum-roll please, 1:44:17 finish!!!

After the race I hung out for awhile waiting for the results to get posted. While waiting I tried some delicious protein chocolate milk, but refrained from all the food as I was meeting some friends for lunch in a little while. Unfortunately I didn't win anything from the raffle (they give away some cool stuff!).

About 15 minutes later I checked the results again to see my official finishing time (1:44:17), and to see that I had gotten 3rd place in my age group!!! I was so excited about this (I never win anything unless I'm the only one in my age group), so when the time came for them to announce the awards I was all ready, front and center. And then they didn't call my name. They called some other girls name.

I went back and checked the results, and no I hadn't been mistaken - there was my name with a "3" next to it under division place:

So after the results were all done I went and asked about it... and apparently some girl didn't put her age in when she registered - so they had to verbally ask her when she crossed the finish line - and OF COURSE she was in my age group - bumping me down to 4th.

Now don't get me wrong - I'm still very happy with my time - this was a HUGE accomplishment for me, especially on a tough course like this. But to see that I had gotten 3rd and to get really excited about it, to then have it taken away?! That was hard. It would've been one thing to have seen 4th and just been like "oh darn, maybe next time." But this was being told you place (and were going to get stand on a podium for the first time EVER), and then it got taken away! It was depressing. And I felt like the organizers who I had inquired with about it were kind of rude to me about it. So I guess the moral of the story here is to never ever trust race results until they are finalized I guess...despite seeing them on paper.

So OTHER than that depressing part, the race went extremely well. I was really happy with my time and proud of myself for pushing through this despite how tough it was. I'm learning to get better about pushing through the uncomfortableness of fast running, and as a result am truly getting faster! With every race I do, I am feeling better about my goal to qualify for the Boston Marathon! Most people probably thought I was a crazy when I said I wanted to try for a BQ, but seeing results after working my butt off is really helping. This really is the hardest training I have ever done, so it is very rewarding to see results!

I also felt it very appropriate to wear my "Run with Endurance" tank. I'm trying to work on being more open about my relationship with Jesus this year - and I know for a fact that I could not have ran this time without him. When I was feeling like slowing down and giving up, I recited some of my favorite verses including my favorite:

"But those who hope in the Lord will renew their strength. They will soar high on
wings like eagles. They will run and not grow weary."  - Isaiah 40:31 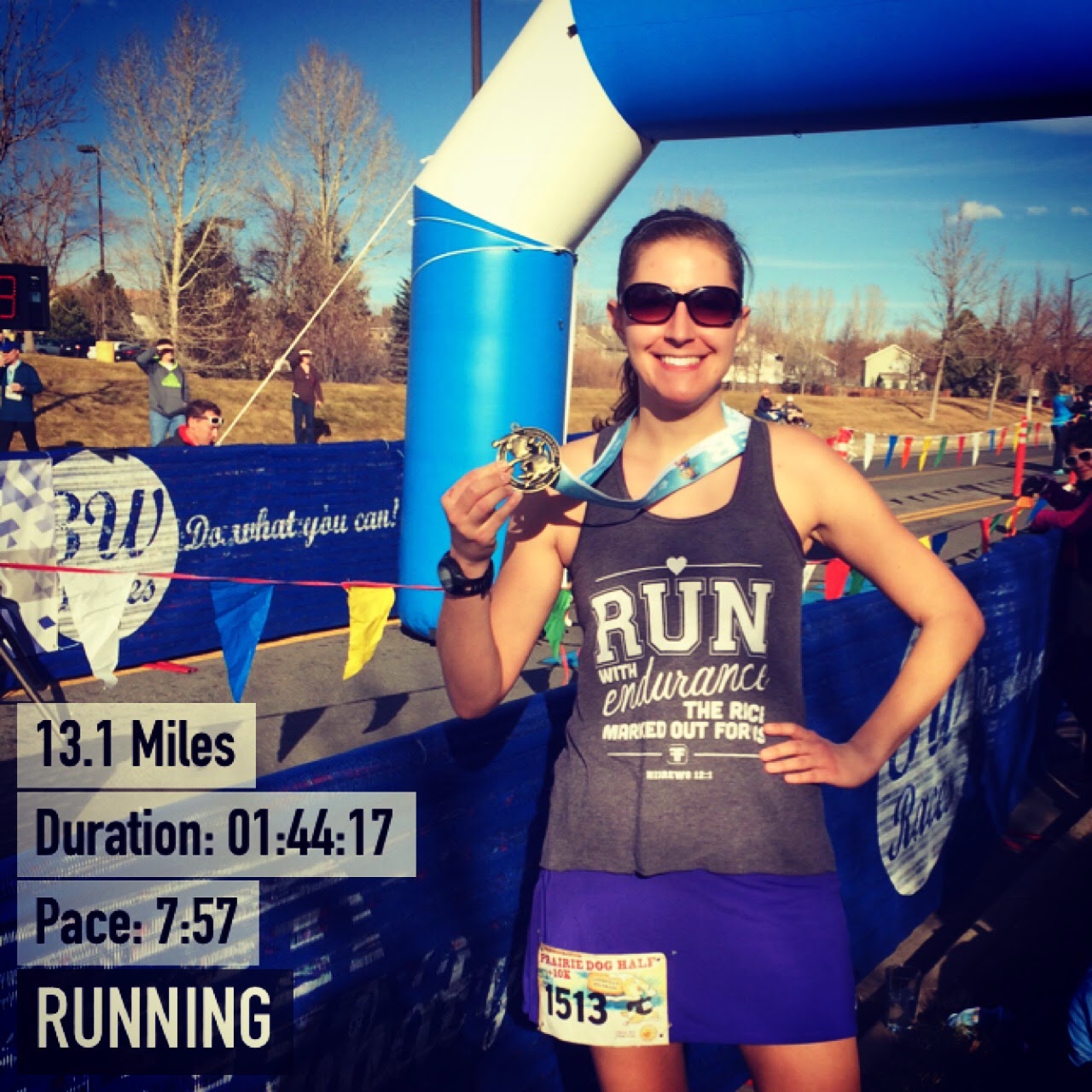