Growing up 15 minutes outside of Boulder, I, of course, heard about the Bolder Boulder every year. In middle school  you could get extra credit if you did it. In High School I volunteered a few times and always remember seeing classmates run it (always the super athletic classmates, who I always felt inadequate towards - maybe this was why I was always so reluctant to try racing before?). Honestly, running a 10K seemed out of reach back then. Plus the fact that this was during my "I hate running" phase (although can I really call it a phase, if it was the first 24 years of my life?). Anyways, in college, I seriously did consider trying to run/walk it sometime. But I just never got around to actually putting in the effort to sign up and train for it.

So needless to say, when I actually did get really into running, I knew I had to do it. I wanted to do it in 2013, but didn't sign up fast enough and it gets pretty expensive, so decided not to. Which meant it was settled - 2014 would finally be the year! I was actually going to run the Bolder Boulder - America's second largest 10K with over 50,000 participants! Enough participants to have masses of people crossing the finish line in Folsom Field for HOURS on end (this still baffles me!).

I signed up in January right when registration opened and checked to see if anyone else wanted to do it with me - and to my surprise, I managed to convince my Dad to do it! Yay! Then in early April, my mom decided to sign up as well to walk it! One big happy family at the Bolder Boulder (with the exception of my siblings...but who cares about them...j/k Kari and Jon!).

So onto race weekend:

The nice thing about this race was that it was over memorial day weekend, so since I had 3 days off, I actually felt like I could take my time heading over the Denver. Therefore, I stopped in Vail for a beautiful training run on the bike path that goes up and over Vail Pass. It's 8+ miles one-way to the top, so I didn't quite make it to the pass, but I went 6 miles up and then headed back down for a nice 12 mile training run (that will hopefully help me survive Leadville Trail Marathon on June 14th). I actually got above 10,000 feet in elevation which was great: 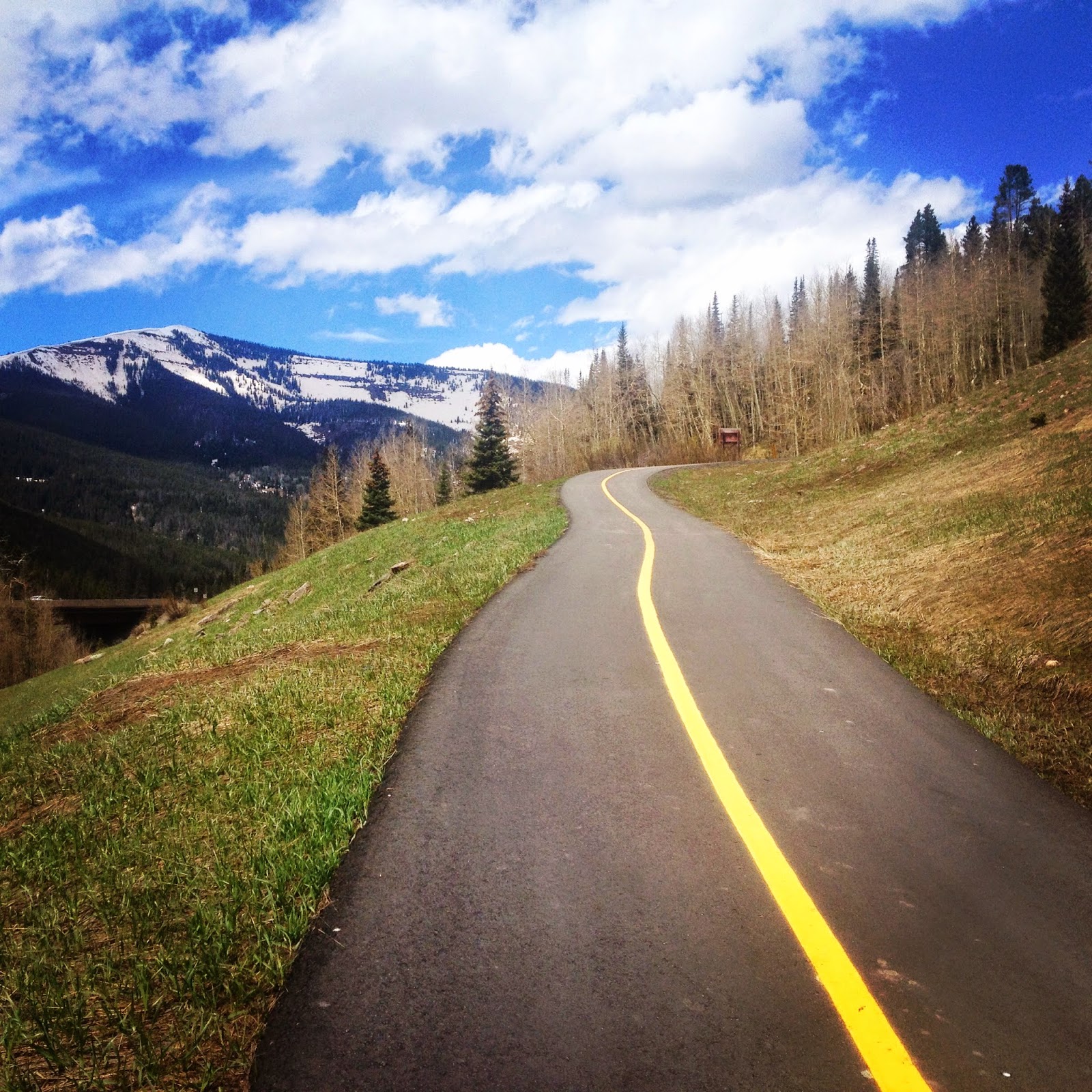 I made it to Denver around 3 on Saturday afternoon, so plenty of time to go to Flatirons for church, which was nice. I haven't been able to make it there in forever! On Sunday I had breakfast with friends and then my mom and I headed to Boulder for the race expo so I could pick up my race packet. I'm so glad we went! The expo was on Pearl Street and it was just gorgeous weather out! Lots of fun checking out all the vendor booths (and spending too much money!).

Before I knew it, it was Monday morning! We were taking the RTD (bus) into Boulder, and weren't sure how long it would take, so we left around 6:00am. My dad and I were starting in the GD wave (they had something like 90+ waves of runners), which started around 7:50am, and my mom was in the W wave, which didn't start until shortly after 9 (I still can't get over the fact that they have THAT many people to just be constantly starting for 2+ hours!!). We made it into Boulder around 6:30, so had plenty of time to figure out where we needed to be and wait in line for the "Fed Ex Mobile Lockers" - which was essentially a bag check that they charged you $2 for (yeah...don't call it a locker unless there's actually a lock on it).

Eventually it was time to get into our Wave! Our wave was still pretty far back at first, so Mom stayed with us for awhile, but once we entered the fenced off portion, we said our goodbyes and got ready. I turned on my Garmin about 10 minutes before the start to make sure I could find Satellites in time, then took a few pictures! Then of course, 1 minute before the start, I noticed my Garmin had gone back into power save mode, thus losing satellites again (ugh)! Luckily, I got it ready again just in time for the start! 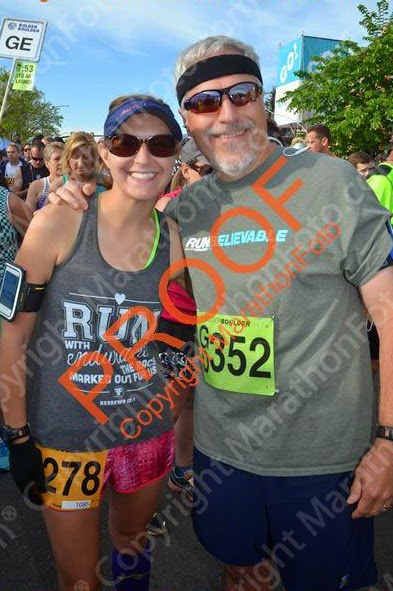 We started off at a fairly slow pace because of the amount of crowds. There were spectators EVERYWHERE which was pretty cool! The miles all kind of blurred together, so I'm just going to highlight some of the cool things I saw (but might not be remembering them in order or anything). There were at least 2 slip-n-slides that you could do while racing (maybe next time, haha!), several bands playing, belly dancers, people spraying various hoses and water guns, and people handing out Doritos's (I actually thought about taking some - just because I couldn't take the bacon at Colfax the week before).

Despite being in a running wave, I was surprised at how many people were walking (even at the very beginning). Granted we weren't in a qualified wave, but still. There was quite a bit of dodging around people - but it wasn't terrible. I think the waves were spaced out enough that it made passing possible - but did require some extra effort - and effort looking around to find my dad after we would go around people.

They had the course marked at every kilometer and every mile, which was nice. I've never done a race with the kilometer's marked, and they felt so short!  We stopped at the second aid station for water, and then I stopped at a later one again (well we didn't really "stop" by you know what I mean), but more to pour on myself because it started to get hot. Right as we turned onto Pearl Street, the sun was blaring down. Before that point it actually hadn't felt too bad.

All of a sudden, we were turning onto Folsom and almost there! People had talked about the "hill going into the stadium" at the finish. Therefore, I was prepared for one hill, but there were actually two, which caught me by surprise. There was a hill on the street heading up to Folsom Field, but then you turn off the street, and there's another! I wanted to do under an hour, but with the hills it didn't quite happen (although I could probably blame the "weaving" in and out of people on that). We entered into the stadium just before the one hour mark, ran around the stadium and finished in 1:00:39. 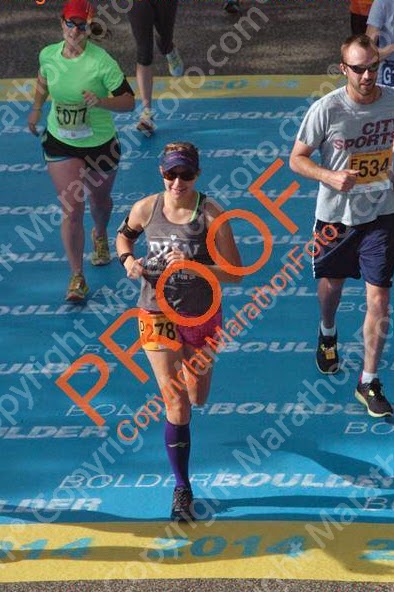 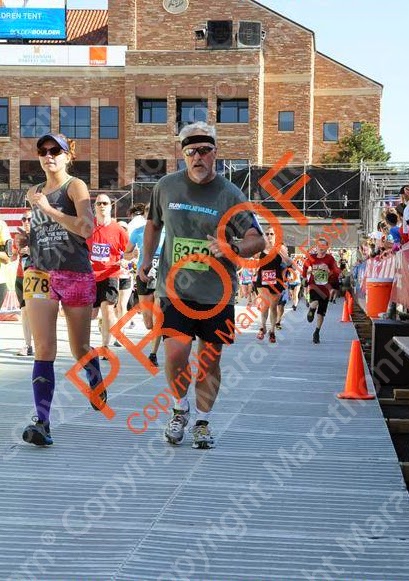 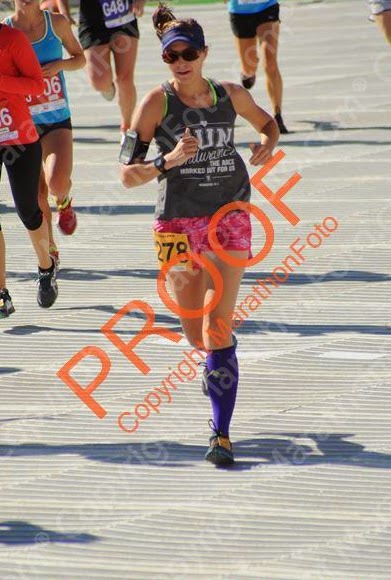 
After you  finish there is a lot of walking. I think because of the amount of people they are just trying to get people to keep moving out of the way, but it was kind of annoying not having any water available right when you finish. You head out of the stadium for a bit, and then they had backdrops where you could get your picture taken, followed by people taking your timing chips back, and then finally, they had water and Gatorade. After that you head into the field house where they have your goodie bag / lunch, along with soda and beer. Then you can either head into the stand to spectate, or they had the expo vendors set up again.

Dad and I hung out for awhile waiting for my Mom. I also found out that they don't start the elite field until later in the morning - so you can actually watch them come in which is pretty cool! This year they had a pretty well known field of elites, so I definitely wanted to stay and watch, especially the women - since both Shalane Flanagan and Deena Kastor were competing. They started the elite women at 11:15. There were still TONS of people coming into the stadium as this point, so it was crazy to think the course would be cleared by the time they finished (in slightly over 30 minutes) - but unbelievably it was (and who knows - maybe they pull people from the course, I don't know). They had the live coverage of the elites on the big screen in the stadium, so it was pretty cool to watch it all, and then watch as they came in and ran the perimeter of the field before finishing. They are all SO fast!


Overall thoughts and likes / dislikes on this race:

This was overall a "fun" race. I think you could potentially PR if you were in the wave corresponding with the time you want to finish, but due to the fun atmosphere, the amount of people, and things to see, I think you're better off just going with the flow and enjoying this race. I was surprised at how open the waves were. They say that you'll get disqualified if you start before your assigned wave - so I guess that's enough to keep people from just hopping into a faster wave (vs. the marathons I've done where they check you into a gated wave/corral). The swag was good - a gender specific T-shirt that I will definitely wear again and a lunch box full of goodies. I also got a bunch of freebies at the expo as well. It's a little on the pricey side for a 10K (I paid $45 for early bird registration), but considering the hype and popularity of this race, I'd say it's worth it (although not worth the "late registration" costs - I think it goes up to like $70 or something crazy for race day registration). I definitely recommend this race. I'm not sure it's worth the drive from Grand Junction to do every year, but if I lived in the area, I think it would make a great Memorial Day tradition.