This is the cool thing about western Colorado. Before I moved over here, I never really realized what a diverse landscape we have in this state. It's definitely not just mountains (although those are still my favorite).

My foot has been hurting since my ultra marathon last month, so I've been taking some time off of running. What saddens me about this is that I haven't been getting out and enjoying the outdoors as much as usual. So, I convinced my husband that we should go for a scenic drive this weekend! My first thought was Capitol Reef National Park in Utah, but then I decided I didn't want to drive quite that far, so, since the weather was supposed (big emphasis on supposed) to be nice on Sunday, we decided on Durango by way of the San Juan Skyway scenic byway (we were going to do a loop - heading to Durango using Lizard Head Pass, and then coming back home via Silverton and the million dollar highway). However, all of this was scratched when we woke up Sunday morning ready to go and the internet said all the mountain roads were icy. Yes I wanted to go, but I didn't want to risk driving on icy mountain roads for no specific reason. Luckily I had a backup plan - driving a different scenic byway - the Unaweep Tabeguache Scenic Byway. The actual scenic byway starts in Whitewater (just south of Grand Junction), heads west to Gateway, then south to Placerville.Since we couldn't just do one way, we did a loop - driving from Montrose to Whitewater, onto the Byway, then once we finished the Byway in Placerville, headed back east via Dallas Divide and to Ridgway and then north back up to Montrose.


It actually worked out pretty nicely other than the crazy weather. I figured by doing this more desert route we would be safe from any bad weather. But I was wrong. Shortly after turning onto the byway at Whitewater we hit rain and snow. It wasn't sticking to the roads and we could tell there were clear skies ahead, so we kept going. This first part was in the Unaweep Canyon. It definitely had some beautiful views: 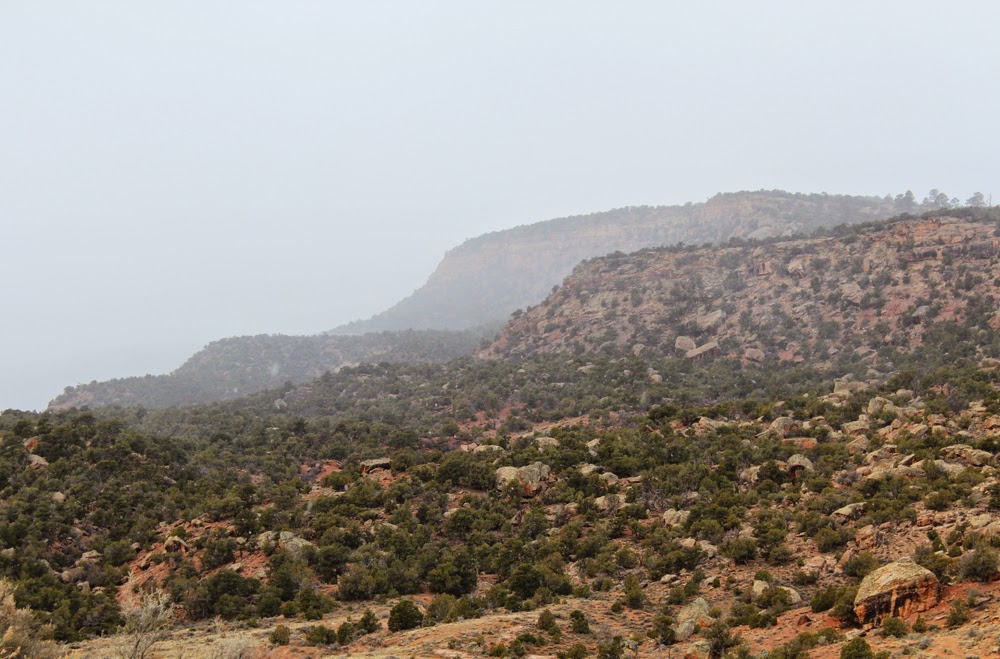 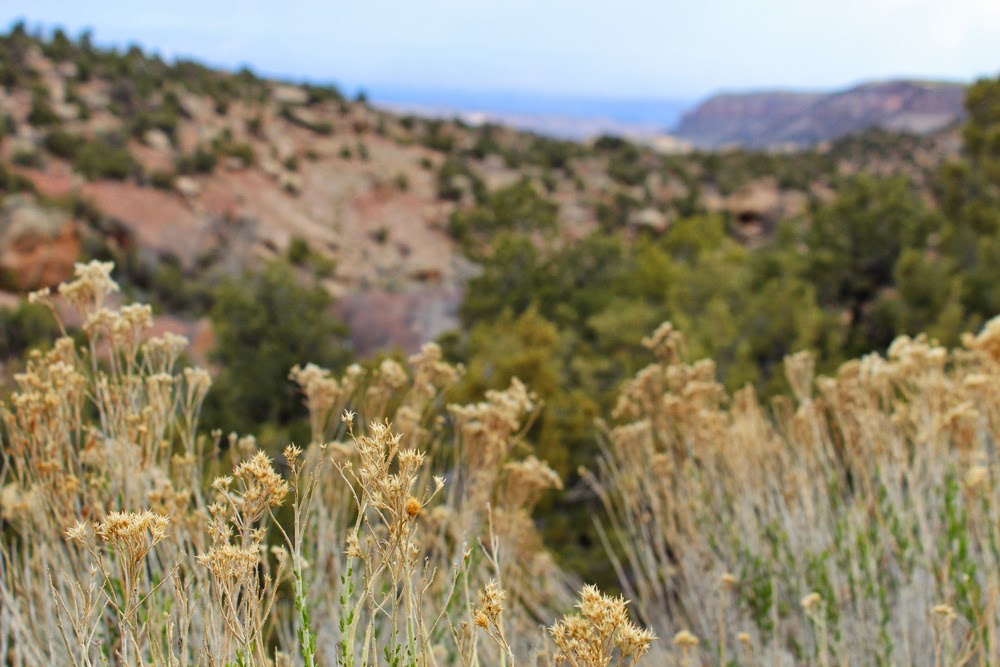 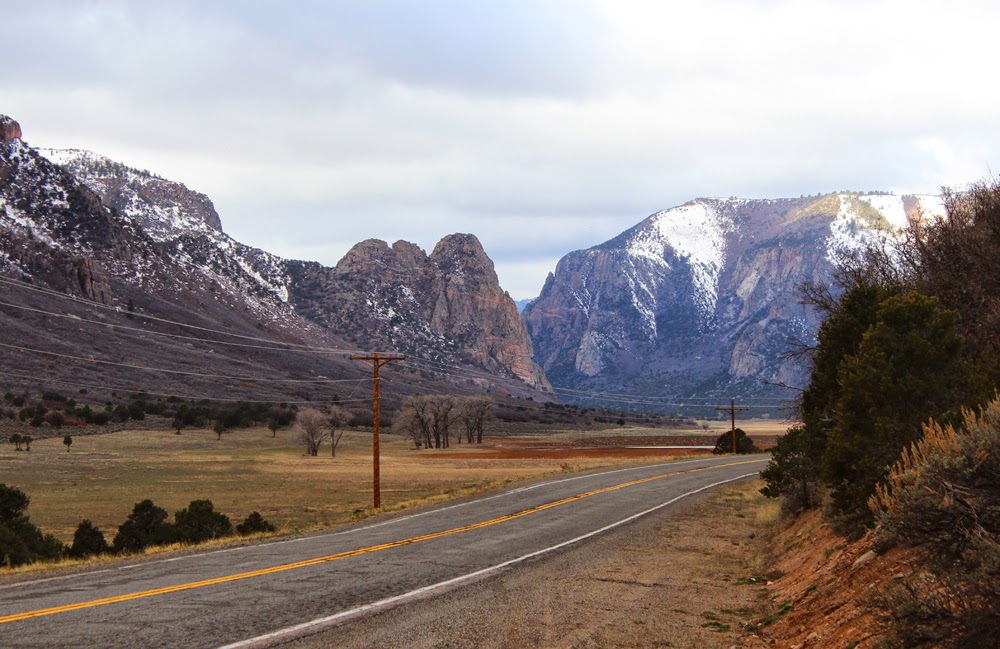 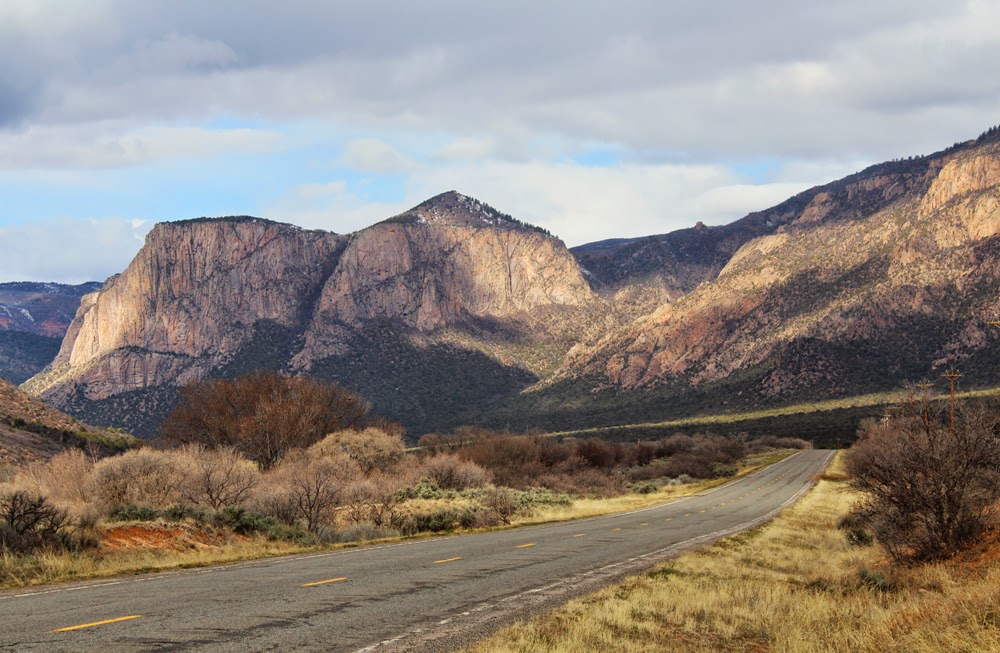 The weather cleared up about halfway through the canyon, so we had absolutely gorgeous views of Gateway. Gateway is mostly known for the large resort in the town which includes a car museum. We had Argie with us today, so no stopping at the museum, but maybe next time (I've heard it's pretty neat). As the crow flies, Gateway is only about 5 miles from the Utah border, or 30 miles from Moab, so there's no surprise that is has a similar look to Moab - with its red rock formations. 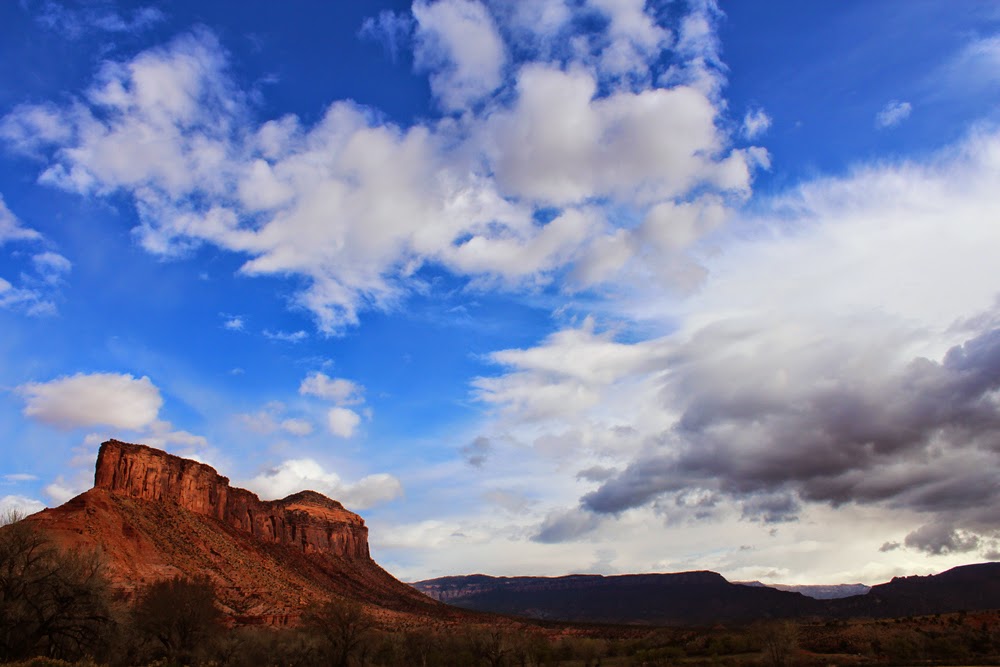 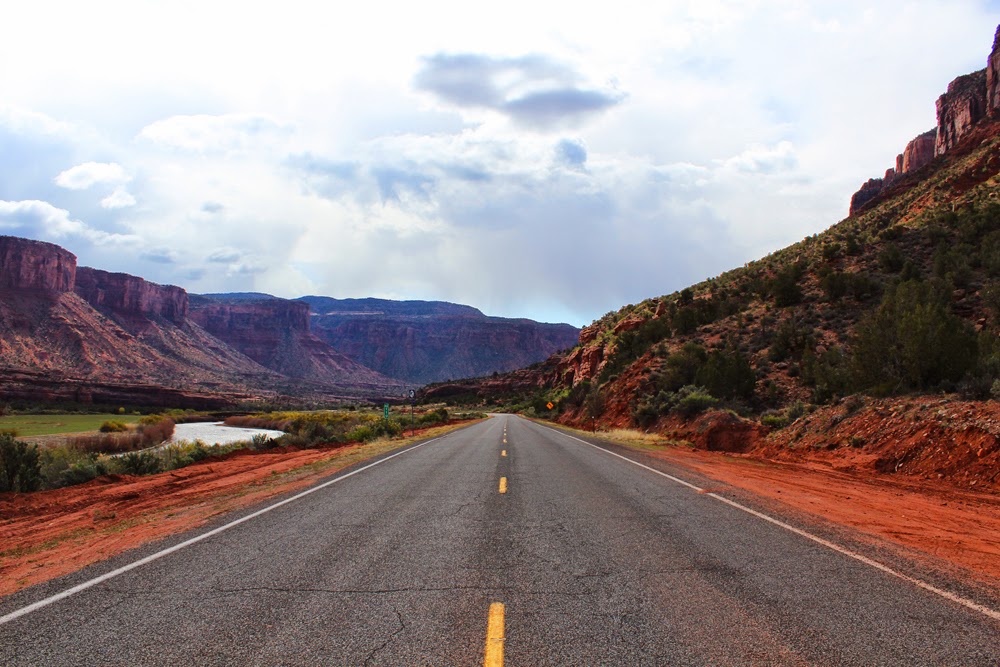 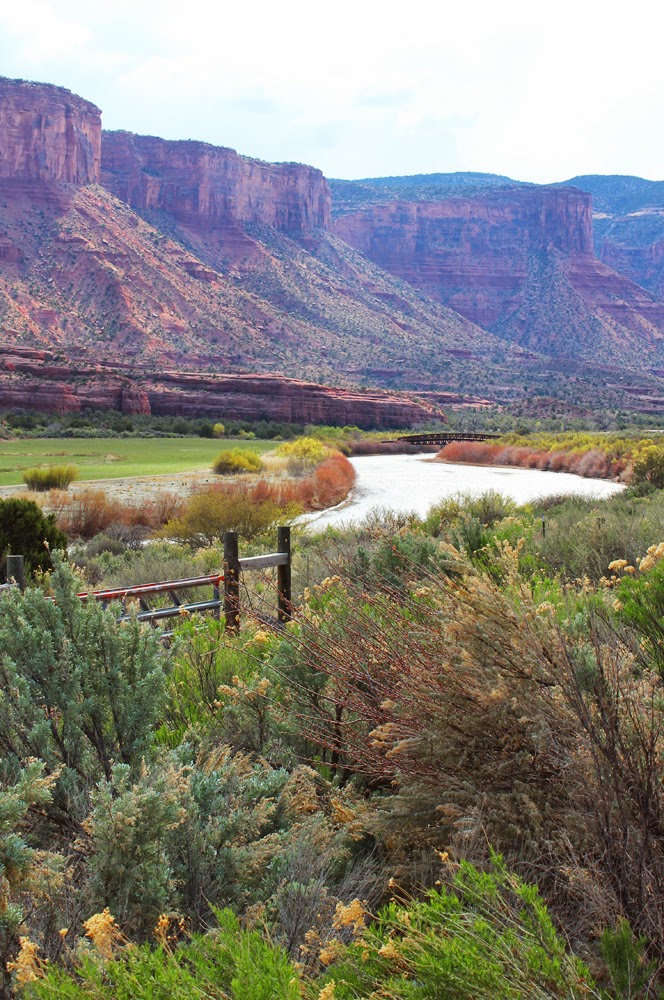 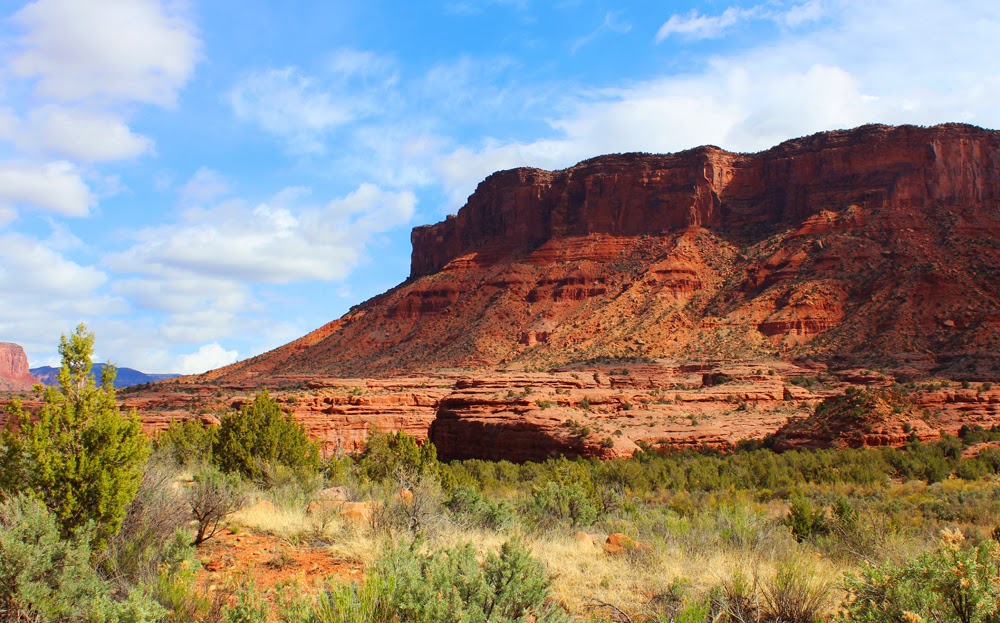 After leaving Gateway, the drive meanders through red rocks until you get to the Dolores River Canyon and the Hanging Flume. The Hanging Flume is a national historic landmark that was built in the late 1800's for placer mining. 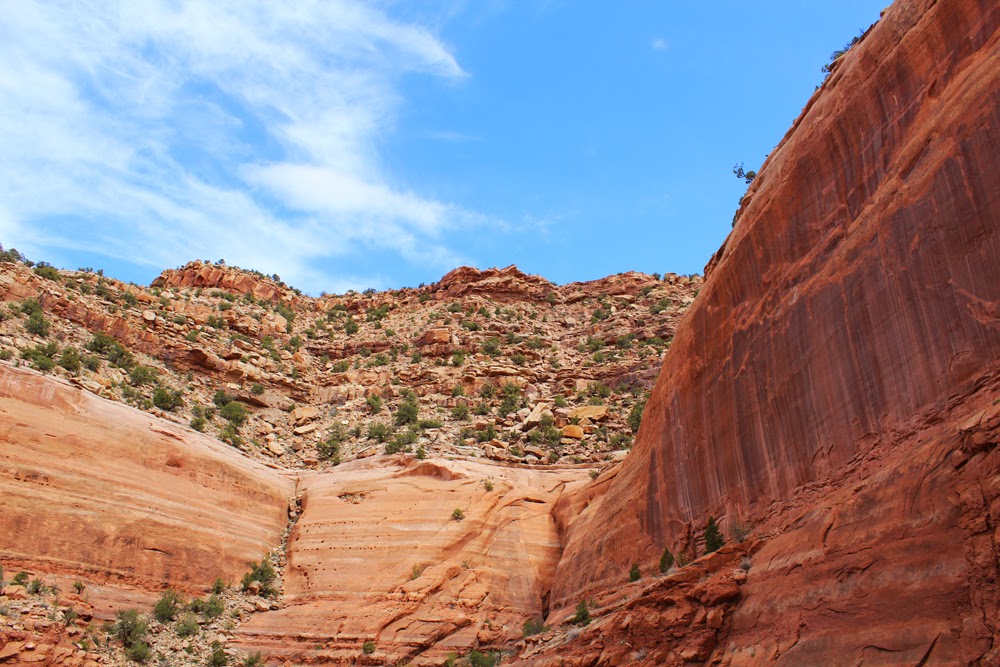 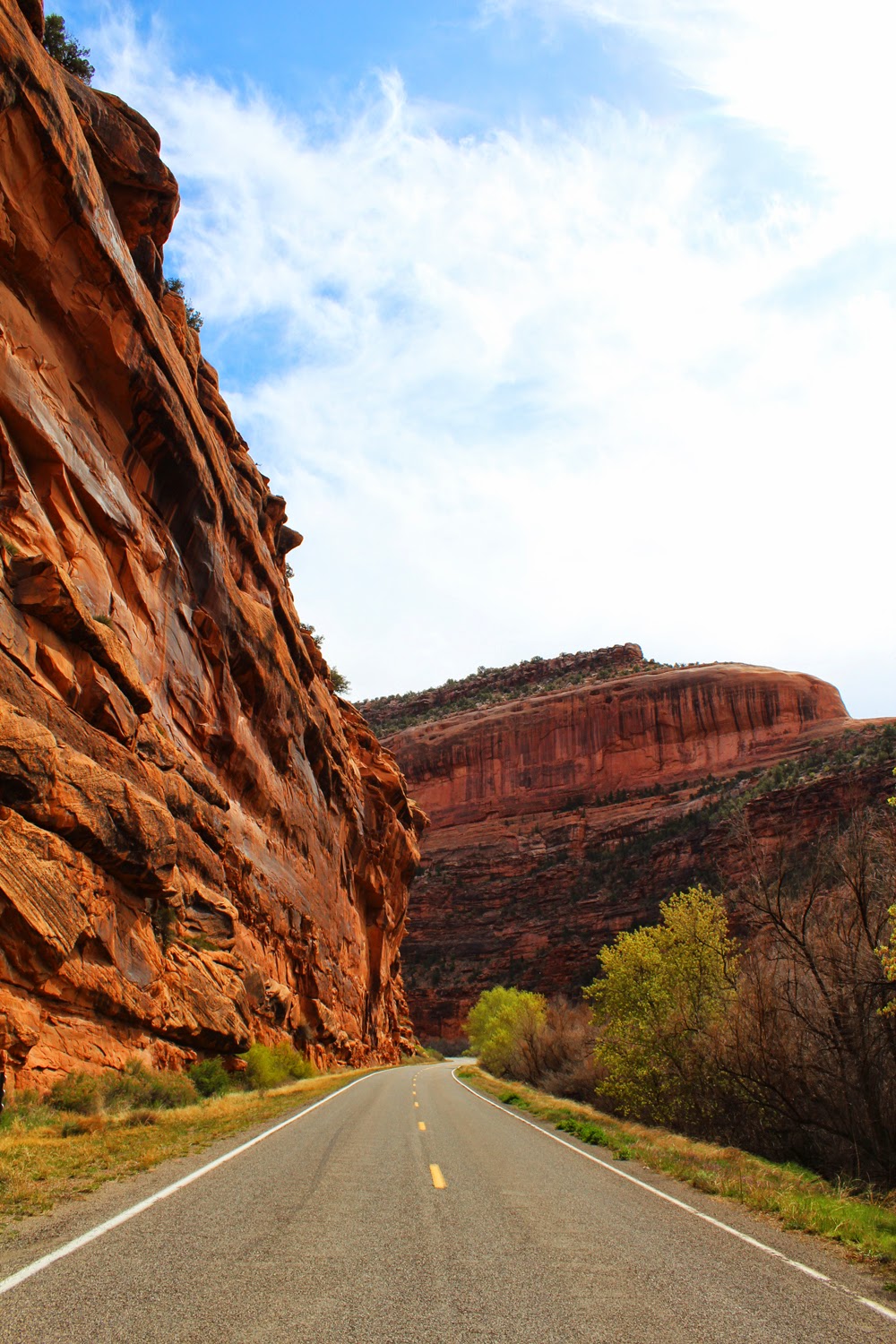 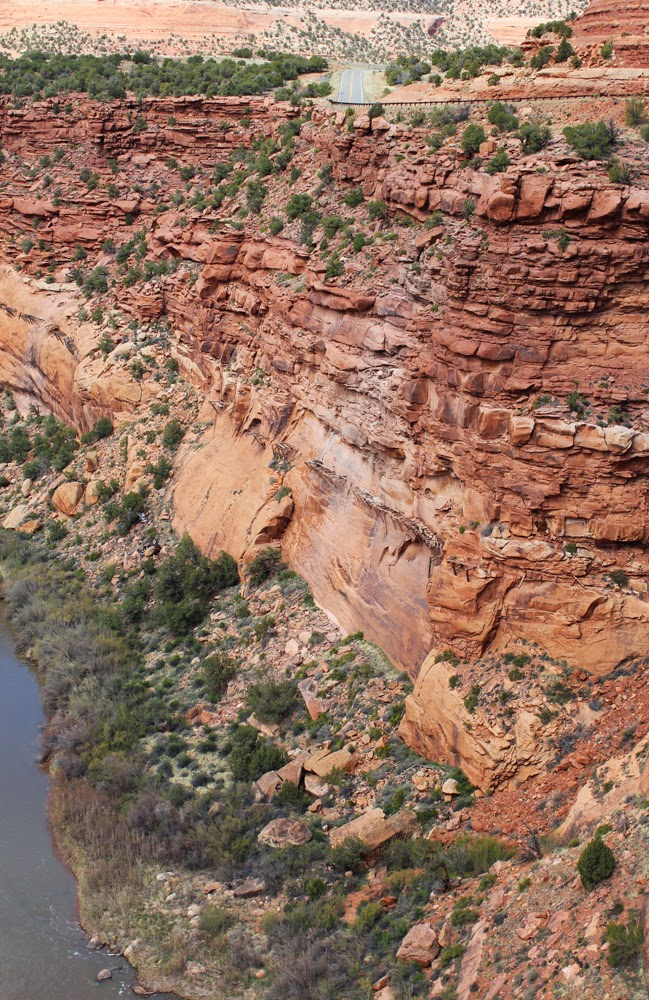 The section between the hanging flume and Placerville was fairly uneventful. We drove through Naturita and Norwood, both small towns - although not quite as small as I was expecting given how remote the area is. Between the two towns the weather changed again, from sunny to cloudy and snowy. I was a little bummed that the clouds came in, as I think there might've been some good views of the San Juan Mountains had it been clear. Shortly after Norwood is a fairly steep decent and the landscape changes to a more mountainous environment. We passed several campgrounds and picnic areas along the San Miguel River. It was right along here that the weather went from bad to worse. It started snow/hailing. It was coming down pretty hard and started sticking to the roads, so we decided to pull off at this point and just let it pass. 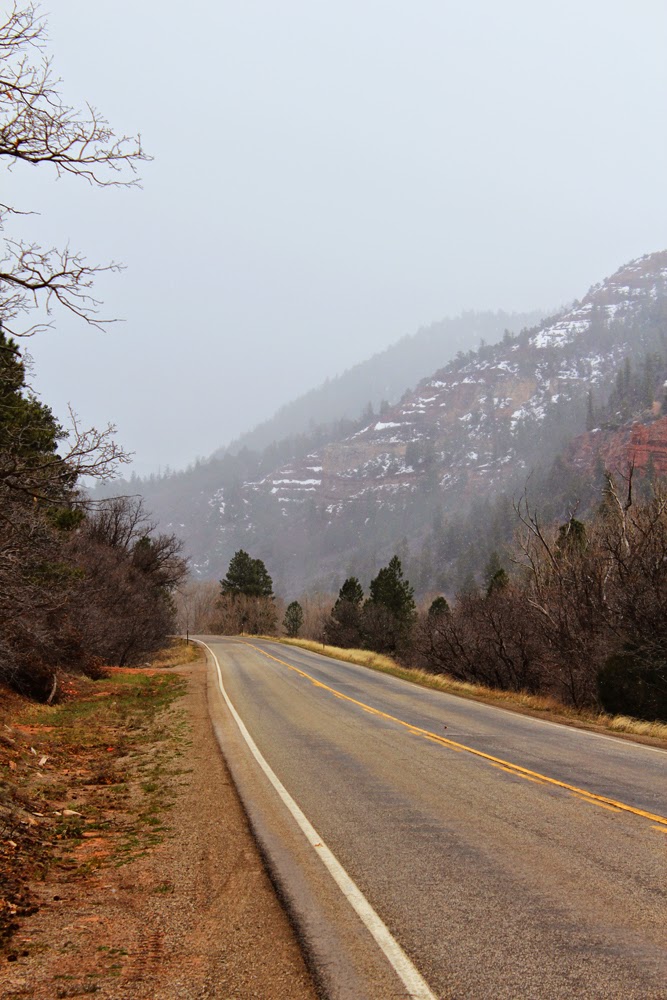 After waiting it out for 15 minutes or so, it had lightened up a little, so we continued on. Not to long after this we reached highway 62 which goes over Dallas Divide. I, as usual, wanted to stop at Dallas Divide (I mean who can honestly drive highway 62 and NOT stop there - no matter how many times I see them, the views always take my breath away). Of course with the crazy weather we were having, it wasn't the same - you could barely see any of the Sneffels Range, but it was still beautiful!


The weather continued snowing off and on until we reached Ridgway, and then it seemed to stop and we had clear views back to Montrose.


I had a lot of fun on this drive! Scott and I don't tend to do a lot of things like this in the winter, so it was fun to spend some time together exploring a new part of Colorado!