Perhaps I spoke too soon on last weeks post, because this past weekend, I felt awesome! My runs were seriously amazing! So much so that I'm a little worried I over did it...but I'm feeling okay so far, so hopefully all will be well. I hear so much talk about over training and injuries, that I do get nervous as to where to draw the line. But other than some minor soreness, I'm feeling pretty great.

So what did I do, that put me into this crazy runners high you may be asking?

Well for starters, I ran 33 miles over Saturday and Sunday (definitely a record for me). An 18 mile road run on Saturday morning followed by a 15 mile mountain run on Sunday! Mentally, I just know I needed this. After last weeks bad run, I was just feeling really down about Imogene Pass Run - but now I'm feeling much more confident and excited!

The road run on Saturday wasn't anything too special except for hitting a new all time distance record (which always creates a little bit of a runners high for me). I had plans to do some mountain running on Sunday, so I decided I would try and work on mileage rather than incline on Saturday. The farthest mileage I've had up to this point is about 16.8 miles. With Imogene being 17.1, I wanted to surpass that distance, just to give myself that mentality that I've gone farther before. Of course 17.1 mountain miles are going to be a lot tougher than 18 road miles, but it still felt good to get them in. And honestly, I really haven't done too much road running this summer, so in a way it was kind of nice. I ended up just running around Montrose - starting at the Uncompahre River Way Trail, running up Sunset Mesa, back down, and then out of town towards Ridgway on the frontage road. For being August, the weather was absolutely perfect! Overcast and 60's for the first couple hours, and then it did start to warm up towards the end. I took this nice and slow, which I'm really glad about. Running slow allowed me to relax and just let my mind wander. It helped me remember what it is I love about running. I also spent a good 5-6 miles just catching up with the Lord. So often my prayers are quick, but this allowed me the time and concentration to just chat with God! It was really nice.

I ended up doing all 18 miles in 3:18:56, which is an average pace of 11:03. Pretty slow, but definitely enjoyable. And despite going slow, my legs still felt shot as soon as I finished. It's amazing how you can run for 18 miles, and then the second you stop to walk, your legs feel like they're just about to give out on you. I honestly felt like this run was the opposite of all those "your mind gives up before your body" quotes. Because I was going slow and keeping my heart rate down, mentally I felt great. I felt like I could've kept going forever. But physically, the last 2 miles were tough. My legs were definitely starting to feel it by the end.

Because of how dead my legs felt after the run, I tried something a little crazy. I've heard runners talk about it, but this is the first time I ever considered doing it. I took an ice bath! It sounds painful, and it is, but it actually wasn't AS bad as I was expecting, and I definitely think it helped. Ice baths are supposed to speed up recovery and since I wanted to run hard again on Sunday, I figured it would be a good idea! You fill the tub with cold water, get in and adjust to it, and then poor about 10 lbs of ice in. I made myself a hot cocoa to help keep me warm!

Sunday I actually woke up feeling pretty good, considering how I stiff I had felt the day before. I was still a bit sore, but nothing too bad, so I stretched a little and got ready to head to Ouray and meet up with some other runners who are also doing Imogene Pass Run. Our plan was to run the first 7.5 miles of the race - from the starting line in Ouray to Upper Camp Bird (about 3800 feet of elevation gain) - which is also the first cut off point on race day. 2.5 hours is the time allotted to make it those 7.5 miles. It sounds like a lot, but you definitely have to be able to run a good portion of it, or you won't make it. So it was really reassuring when I made it in slightly over 2 hours (2:03 to be exact). After last weekends run, I really was worried, but now I'm feeling more reassured to know I've done it, and with a good amount of time to spare!

The weather forecast wasn't looking very good and when we made it to Upper Camp Bird it was misting pretty hard. So we quickly turned back around and started to make the 7.5 mile descent back to Ouray. While I think my downhill running has gotten slightly better, I'm still pretty slow in the technical parts, so it was good to get a little more training in. I'm really hoping to be able to run the downhill miles around 10 minutes each, so more practice was good. I was running about 12 minute miles on the technical spots, and 9 minutes on the smooth spots. The road to Telluride won't have quite as many smooth areas though, so that's something for me to remember on race day! I made it back to town with a total time of 3:31:03, or an average pace of 13:57/mile.

So overall I am definitely feeling better about Imogene. I am thinking my goal of 4 hours may be slightly unrealistic, so I'm going to shoot for under 4 1/2, but definitely try my best to make it as close to 4 as I can. I am still a bit nervous for race day, but excited too! It's the first trail race that I've really put a lot of thought and training into.

Next weekend, I do want to do some light training, but nothing too strenuous. My plan is to taper little bit prior to race day!

On another note - I signed up for another race the following weekend after Imogene Pass - the Grand Mesa Bear Chase on September 14th. It seems pretty casual, and with IPR the weekend before, I will probably just take it easy. It was affordable, for a good cause (a local Boy Scout Troup fundraiser), and in a fairly close location, so I thought it would be fun! Its a 4 mile, 8 mile, and Half Marathon. I signed up to do the Half Marathon, but I figure if I'm still recovering from IPR, I can always drop down to one of the shorter distances. I'm excited about it though! I'm hoping the fall colors will have started to appear by then!

I didn't take any pictures during my mountain run, but I did get a few from my road run. I started a little after 6am, and so the sun was still rising - giving me some gorgeous views to run to: 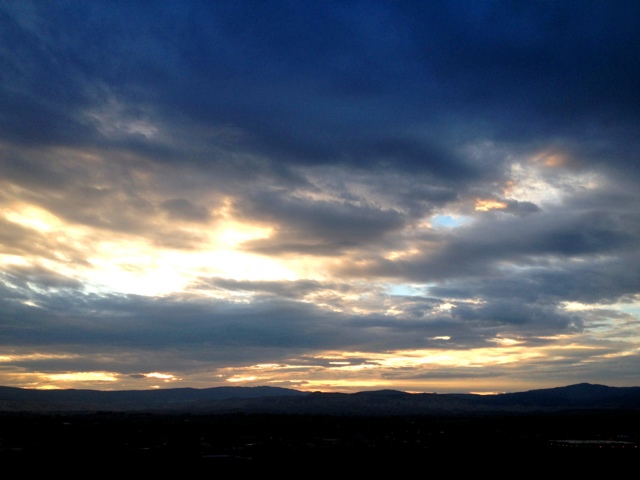 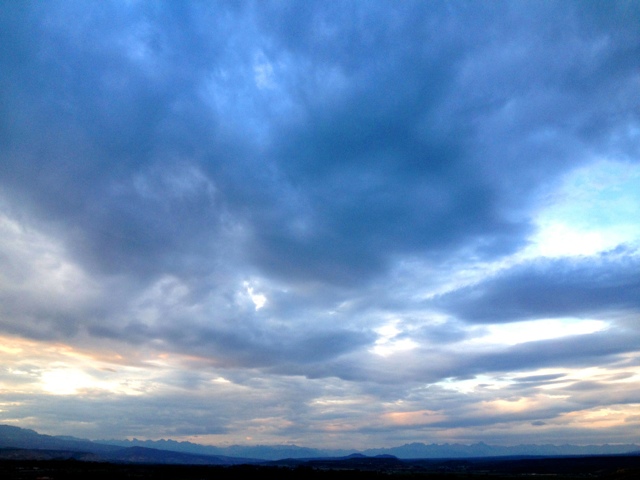 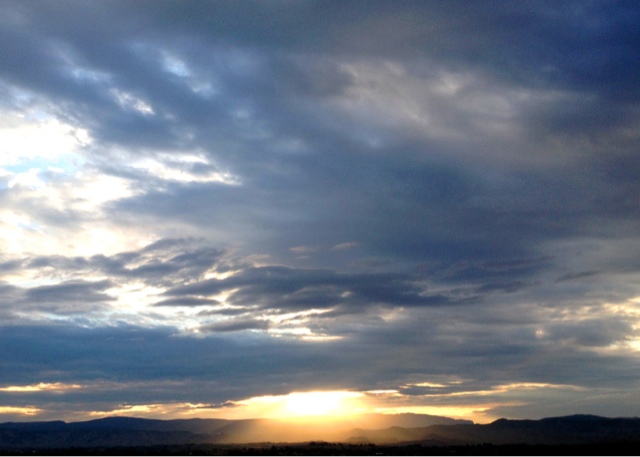 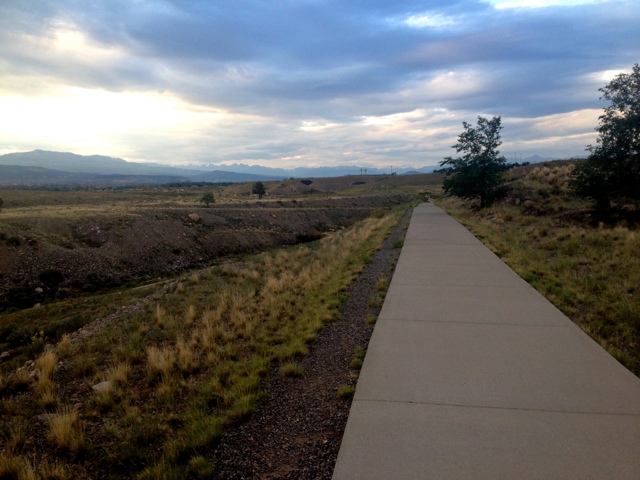 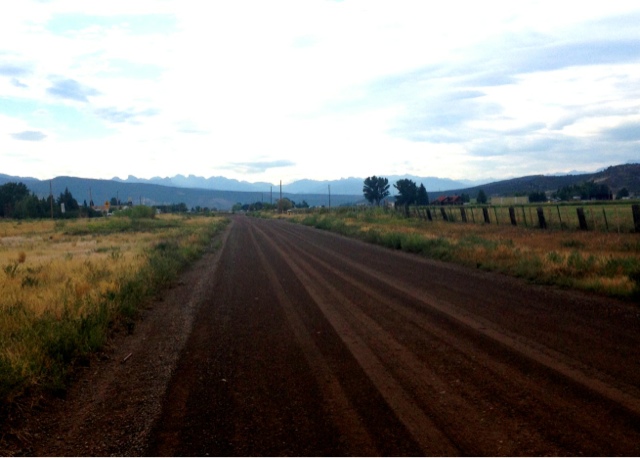