One Year of Running + IPR Training

This past weekend marked my first run-aversary (yes I know I'm a dork for calling it that, but I like it). One year ago on Sunday, I ran my first ever 5K. I keep thinking to myself, if I hadn't signed up for that, I honestly don't know where I'd be today. I know it sounds cliché, but running has changed my life! I used to think there were some people who were athletic and some people who just weren't (myself). But now I see that you can really do anything you set your mind to! Had I told myself a year ago that I would be signed up to run a marathon - I would've thought I was crazy. Even if I had told myself I would run a half-marathon, I would've thought I was crazy! A 5K used to seem like a stretch to me.

Contemplating on these events has reminded me of one of my art teachers I had in college who always said he didn't believe in talent. That if you practiced enough, you could be good at anything. I never really thought of it in context with sports and running, but it's so true! I'm not going to go out and win any big name races, but I have come a long way from where I was last year. I've done more than I once ever even fathomed I could do. I went from barely being able to run that 5K, to running an 8K, a 10K, a Half-Marathon, a 6-mile-completely-uphill-ascent race, a 25K trail run, and am now training for the 17.1 Mile Imogene Pass Run and a Full Marathon! It really is amazing what a difference a year makes!

My speed has drastically improved as well. I still run slow (10+ minute miles) on long runs and steep runs, but I've been able to get a 5-6 mile run down to an average pace of around 8:45 min/mile. I've been able to get individual miles as fast as 7:11! It is a huge improvement for me. I can't wait until I can do a sub-7 minute mile! Just another sign how much I've changed - I now know I can get to a sub-7 minute mile, I don't just automatically assume it's impossible! Anything is possible with time and practice.

I originally wanted to celebrate my run-aversary by running the same 5K I ran last year (and hopefully demolishing my time), but I couldn't find anyone to do it with me. It ended up being for the best though because I ended up doing something about 10x cooler! I ran almost the entire Imogene Pass Race Course!

I'll admit that when I first signed up for Imogene, I was a little nervous. Okay really nervous. I didn't know what exactly I had gotten myself into. Before this weekend, I had gotten up there and done 2 training runs on the lower portions of the course. This helped ease my nerves a little, but I was still worried about the upper 3-4 miles. Those are the steepest and the highest miles, getting up to over 13,000 feet in elevation. So when I got invited to run the whole course with a group, I jumped at it!

As with any group run, I was worried that I wouldn't be able to keep up - but luckily that wasn't the case! In fact, I was the second one out of our group of 6 to reach the top (although it's not like we were officially racing or anything)! Reaching the top of the pass was seriously one of the biggest Runner's High's I've had! That feeling of accomplishment paired with incredible mountain views was amazing.  Here's a quick video from the top:


We started about 2 miles into the course, at around 6:45am. About a mile in, I took a quick stop to use the restroom. I only stopped for a few minutes, but apparently it was enough time to get out of sight of everyone - which wasn't a huge deal, it just provided me a little extra motivation to go faster and try to catch up.

While I was running by myself, I actually passed 2 different Hardrock 100 Ultramarathon runners and got to chat with them briefly. The Hardrock 100 Ultramarathon is one of the toughest Ultramarathon's in the country, and it was going on this weekend. It starts in Silverton, goes to Lake City, Ouray, Telluride and back to Silverton! It's seriously hardcore. The total elevation change over the 100 mile course is 66,000 feet and includes numerous mountain passes, and an ascent of 14er, Handies Peak! And these guys (and girls) go through the night! The trails used are steep, exposed, rocky, and some even dangerous! I can't even fathom how they do it! Even comprehending running 100 miles straight is hard for me!

But anyways, the 2 Hardrocker's (what they call the participants) I passed were on Mile 60-something. I congratulated them and hopefully gave them some encouragement telling them how awesome I thought they were! It was really neat to meet them, and put my training into perspective. Sometimes I think my training is intense...well not compared to these guys!

Once I caught up with 3 other's in my group, we realized we actually missed the fork in the road that goes to Lower Camp Bird (one of the aid stations on the course), so we had to backtrack about a 1/2 mile to get back onto the route. Just past Lower Camp Bird was where I entered new territory. It was also where the running became more and more scarce and was replaced with power hiking. Overall though, I'm pretty happy with how I did on these upper miles. My last 4 miles to the top were all between 20-22 minute miles - which is pretty good considering the grade - averaging at about 14%, and steeper as you get closer to the top, up to over 20%.

The remaining route to the top is just steep, steep, and more steep...but absolutely gorgeous! There were wildflowers all over the mountainside and the grass was a bright, bright green. This is what makes it worth it. As much as I still enjoy road running, I think my heart may belong to the mountains and trails - especially in the summer! I still can't get over how gorgeous it was, and don't even get me started on the views from the top!

Speaking of the top, after numerous switchbacks and some seriously burning calves and thighs, we were finally almost there! One really rewarding thing, in my opinion, is that right before you get to the top, the very last switchback, is almost level! Compared to the gradient we had been on, it felt so nice, and even better, allowed me to run, and run hard, to the top of the pass. This just made reaching the top, that much more rewarding! And as I mentioned at the beginning, it really was a runner's high to reach it! I actually didn't stop running until I touched the Imogene Pass Sign...I practically hugged it, I was so happy to reach it!

After enjoying the top of the pass for a few minutes and fueling up, it was time to start heading down. I was a little nervous about the descent, as I've heard a lot of horror stories about people falling and breaking wrists, etc. However, I'm a fairly cautious downhill runner, and overall, it wasn't as bad as I was expecting. I think hearing all of the horror stories made me prepared for the worst. Now don't get me wrong, it was definitely steep, and I see how if you were really going fast and not being too careful about foot placement, you could definitely fall and injure yourself. But my slow running paid off, and no injuries for me! I did speed up a little after the first mile or so down, when the grade lessened a little.

I would use the word "down" to sum up the remainder of the run. Because that's all it was - just down, down, down for 7 straight miles. It was still beautiful of course, and the views of Bridal Veil Falls and Telluride were gorgeous. As we got closer into Telluride we began to pass more and more jeeps, mountain bikers, and even other runners.

Eventually we made it to Telluride - and it felt great to finish. Although I'll be honest, not quite as great as it felt to reach the top! Hopefully having a finish line will make race day a little more exciting! It was a beautiful run though and I'm really happy I did it. My Garmin clocked it at 16.3 miles, and we finished in 4 hours and 10 minutes. Although I will definitely be happy if I finish in a similar time on race day, I'm really hoping, with almost 2 months of training left, to complete it in or under 4 hours! 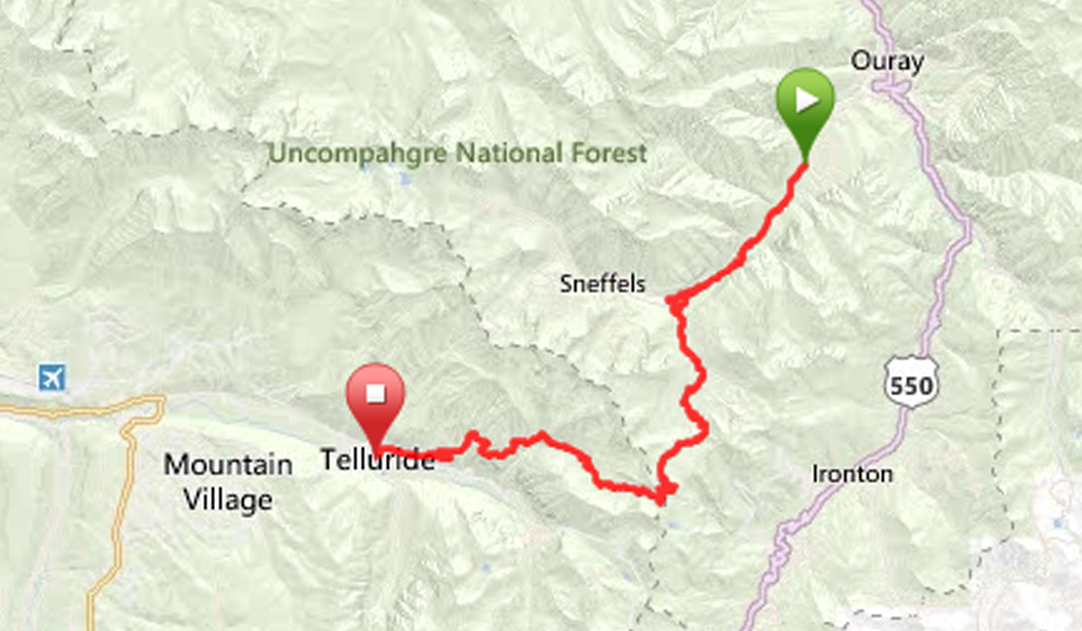 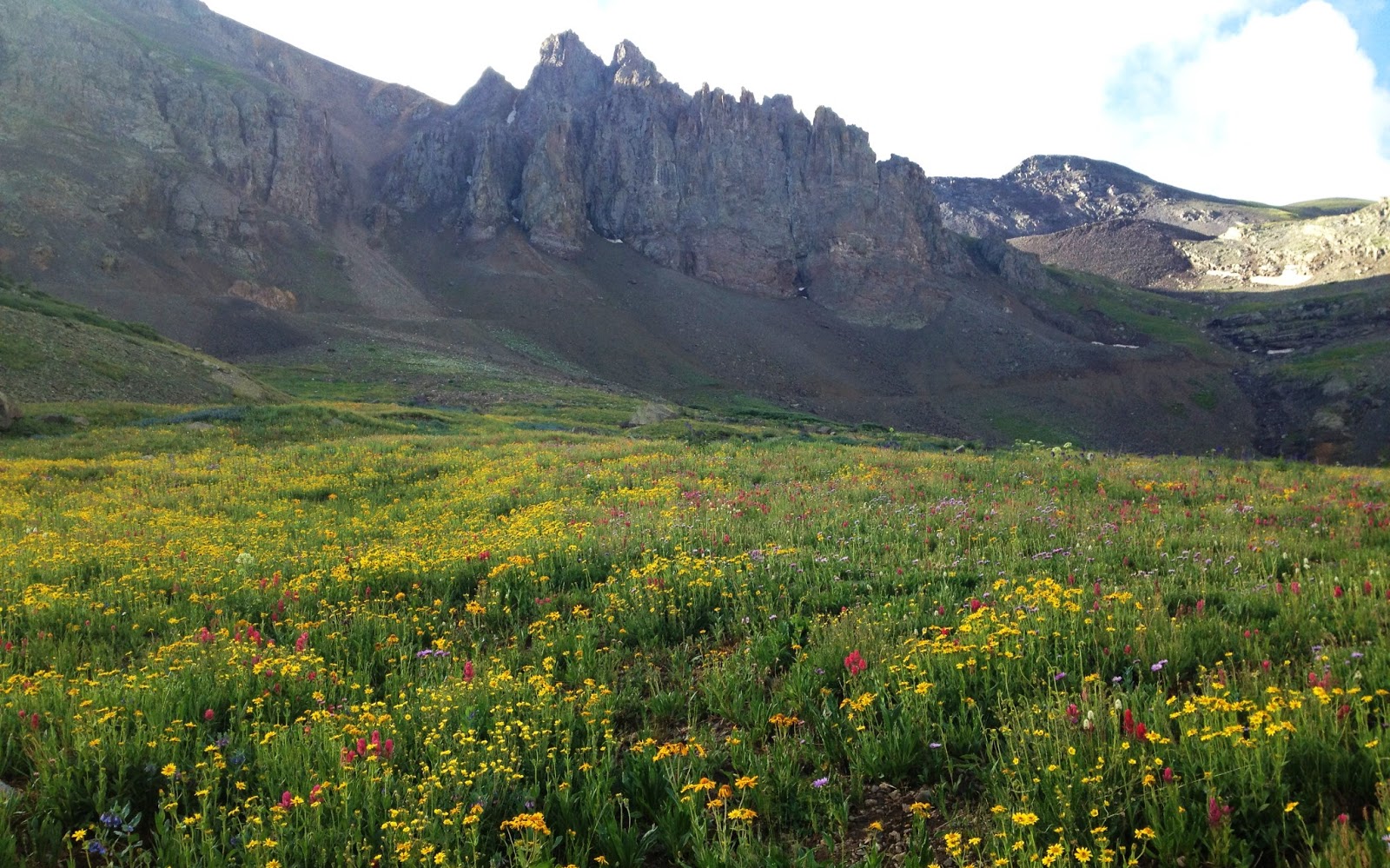 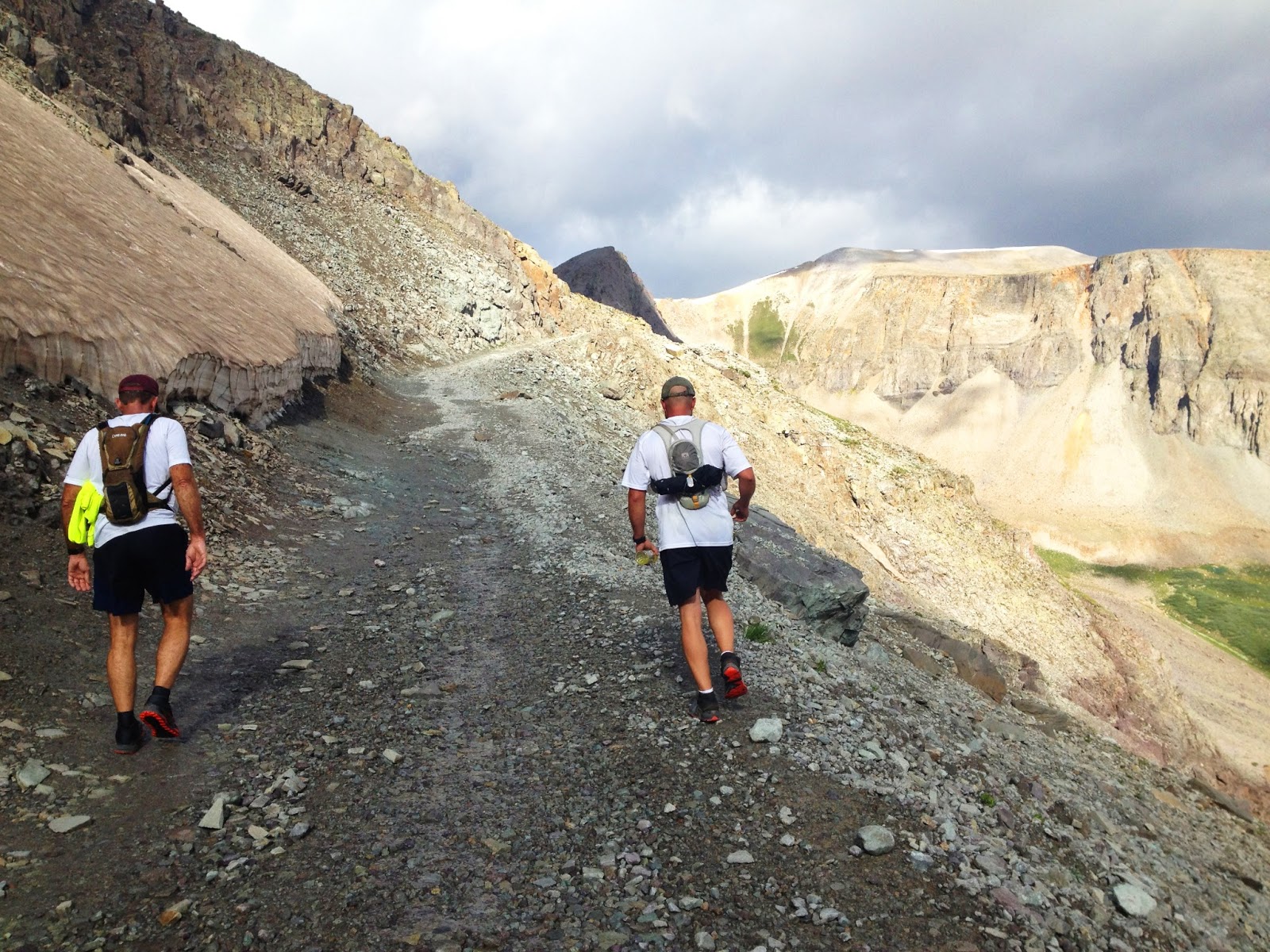 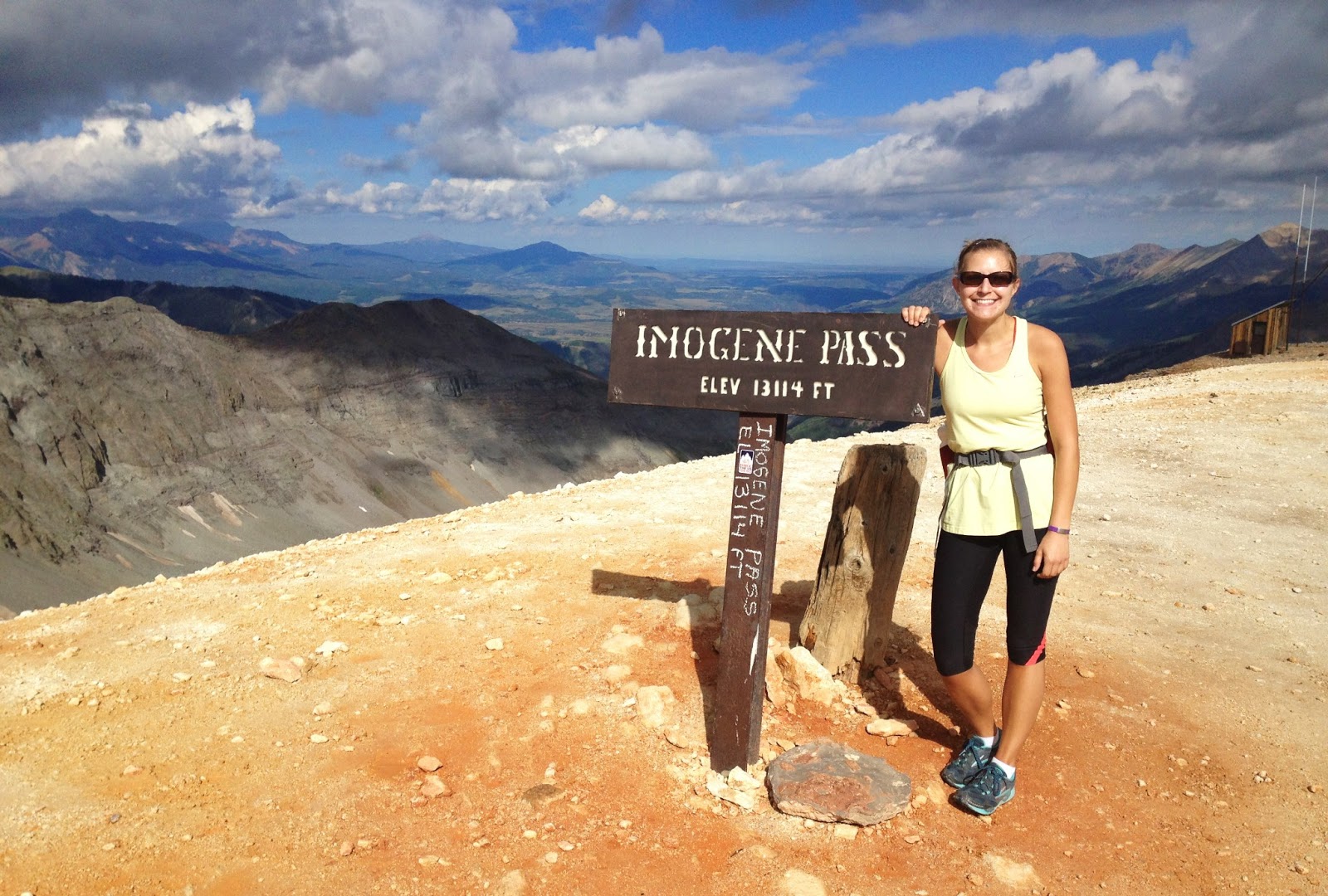 On Sunday, I ended up joining a group of people from Montrose on a last minute trail run in the Ouray area again. It was a combination of Bear Creek Trail and Upper Cascade Falls Trail. Most everyone else did Bear Creek Trail, but it had a lot of exposure and loose rock, which I wasn't a fan of, so I turned back and did Upper Cascade Falls instead. I won't go into any more detail, but I wanted to post a few pictures and a video from that: 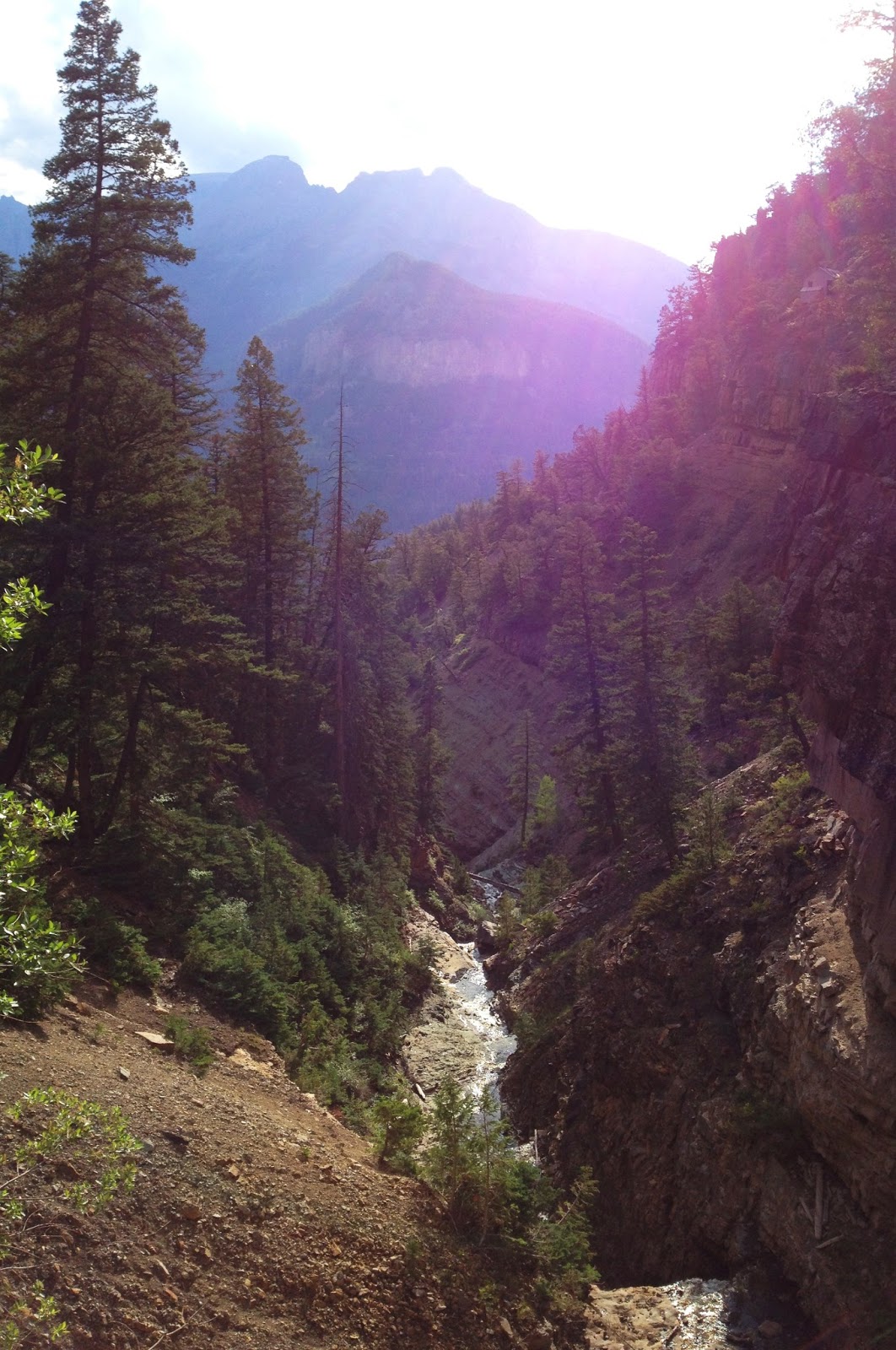