I've been challenged to write about "why I run"... it's such a simple question and yet there are so many reasons. Therefore, I'd like to start with one of my all time favorite quotes about running simply for the fact that everything she says hits home (it's almost like I could have written it myself, except I'm not that eloquent of a writer)... 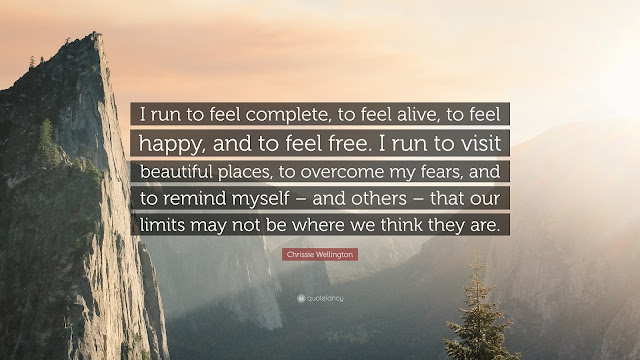 You see, I wasn't always a runner (yep...another one of these stories!). In fact, I wasn't athletic AT ALL. Like none, zip, zero. I hated gym class growing up. I absolutely dreaded sports and running the dreaded "mile" once a year. I was full of excuses and completely content with staying put in my comfort zone on the couch with a bag of Cheetos.

Nevertheless, my reasons for initially getting into running are probably similar to most given our current society, in that they were purely vein. I wanted to lose weight. And honestly, I actually lost 30 lbs before ever even finding running. I was motivated by my 2011 wedding, so I went to the gym a couple times a week while counting calories. Did it work? Yes... the problem with this solution was that it was only a temporary fix and I didn't "love" any part of it. And let's be honest, no one wants to count calories for the rest of their life...

So, in 2012, after I started gaining some of the weight back, I once again joined a gym. This time, however, instead of just doing the elliptical, I decided to start run/walking on the treadmill. That  run/walking slowly turned into more running and less walking and on July 14, 2012 I ran my first ever race - the Komen for the Cure 5K in Aspen, Colorado. I definitely wasn't setting any records or winning my age group, but I accomplished my one goal - running the entire thing without walking. Looking back at it now it seems funny, but truth be told, I was so incredibly proud of myself. No, I wasn't fast, but for the first time in my entire life, I just felt like I had accomplished something athletic and it was A. BIG. DEAL.


After that 5K I started moving my treadmill workouts outside. One morning before work I ran a route around some neighborhoods, having no idea the distance. When I mapped it out later that day, I found out it was 5 Miles!!! 5 Miles?!? Me?! I didn't even know who I was anymore. After that day, I was completely hooked. It had finally hit me that when I wasn't focused on "speed", I could actually run pretty darn far... and ENJOY it too!

The rest is pretty much history - my first Half Marathon, followed by my first Full Marathon, and eventually Ultra Marathons on up to finishing my first 100 Miler last September! If I'm able to run 100 miles straight, I think it's safe to say I really do LOVE to run!


So, back to the question at hand - "WHY" I run? Well truth be told, it is still everything Chrissie Wellington says in that quote I started with:

ALL of these emotions come to light when thinking about why I run. Never before in my life have I been more proud of myself, happier with myself, confident in myself until I started running. It just completes me. It brings peace and happiness to my soul. Do I always want to run? No...but pretty darn often and I think that's what's important! There's nothing like running outside in fresh air to feel more alive and free - the sights, the sounds, the smells. Everything is more vibrant and real when you're experiencing it on your own two feet.

Running has taken me to SO many amazing places - through fresh snow and pine trees. Aspen trees with falling golden leaves. To the tops of mountains and into canyons. I've truly ran in some incredible places that I never would have experienced had I not found this sport (which brings be back to "everything is more vibrant when your experiencing it on your own two feet - the sights, the sounds the smells...").

"...to overcome my fears, and to remind myself - and others - that our limits may not be where we think they are."

As mentioned in the beginning, I used to just make excuses. "I can't do this."  "I'm not good at that..."  "There's no way someone like ME could do that..." Running truly has helped me overcome my fears and teach me that I am capable of more than I EVER imagined. My first mountain run - Imogene Pass Run - was a 17.1 mile point-to-point race from Ouray, Colorado to Telluride, Colorado via 13,114' Imogene Pass... when I first heard about it, I thought it was a race for crazy people. There was no way "I" could do that...but then, you know what - I DID IT. This race was one of my defining early races that taught me I can do anything I set my mind to. It was because of this race that I knew I could run ultra marathons. It was because of that race that I signed up for, and completed my first 100 Mile Ultra Marathons. Because running isn't just for super human, crazy people. It's for everyone, and any one. Does that mean it's going to be easy? Most definitely not - big goals take time, dedication, perseverance and seriously hard work, but I still believe you can and will get there!


So there you have it - I know some people have much more exciting stories, but it's how I got here and that's why I run. If you've never really tried running, or, more specifically, never stuck with it longer than a couple of days, I can't encourage you enough to give it another go. As someone who used to just assume I hated running, I can't emphasize enough that you have to stick with it, because YES, it will be hard at the beginning...(as all new things usually are!), but once you get passed the initial few weeks, (and remember to keep it SLOW), it really is a truly amazing sport that can take you so many places!