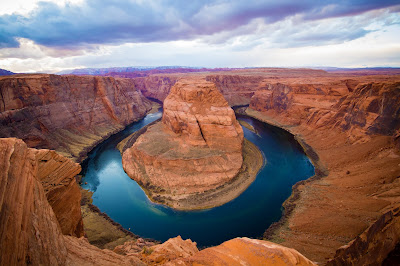 The Antelope Canyon Ultra's have been on my bucket list for at least 3 years now, so I was super excited to finally commit to it this year! The reason I haven't done it in the past is that I'm typically always road training during the winter, but I decided last summer to sign up anyways. Low and behold, I am once again, in the middle of road training for Revel Mt. Charleston Marathon in April, but I still had to do it! I mean, it was on my bucket list, and #YOLO right?

This was my first race of 2018 and my first race in almost 3 months, so I was more anxious and excited than I would normally be for a race (since I'm usually doing at least one a month, if not more) and started packing and planning my race outfit a week out...of course the weather forecast kept getting colder and colder the closer we got and my skirt/tanktop outfit turned into capri's and long sleeves! Nevertheless, I was still pretty excited...

We dropped the dogs off at the kennel on Friday morning and then hit the road! I knew the forecast wasn't looking great but I was hopeful the "snow" it showed would just be light flurries, and we'd make the 6 hour drive in plenty of time to get to our scheduled Antelope Canyon Tour that afternoon. While called "Antelope Canyon Ultra's", the 55K does not actually go through Antelope Canyon, it only goes through Waterholes Canyon, so I thought it would be fun for Scott and I to go do a Tour of the actual Antelope Canyon on Friday afternoon before the race (you can only see it via guided tour or special event)! Unfortunately, our 6 hour drive turned into a 7.5+ hour drive as we hit snowstorm after snowstorm, after snowstorm (I seriously think we went through 5 snowstorms including white out conditions from Monticello to Blanding, UT). I eventually had to call the Tour Guide and let them know that we wouldn't be arriving in time for our 3pm tour...to which they informed me that they had to close the canyon anyways due to snow... so I guess it just wasn't in the cards for this trip after all! 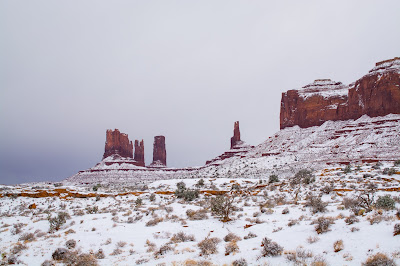 Well, with no tour to get to, we had a nice leisurely afternoon, arriving into Page, Arizona a little after 3:00. After stopping by the expo to get my race packet, then checking into our hotel, we opted for an early dinner at a local pizza and pasta place, before making our way to see Horseshoe Bend a little before sunset. I would see Horseshoe Bend during the race the next day, but I was still really looking froward to going on Friday since I would have my DSLR camera and get to enjoy it with Scott. It was freezing cold, and the sunset wasn't all that spectacular, but Horseshoe Bend on the other hand, definitely was incredible and well worth the trip! 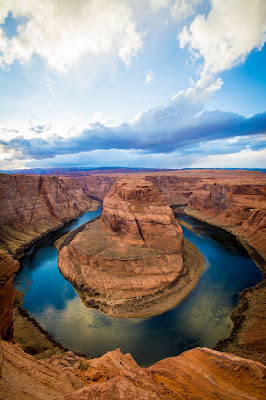 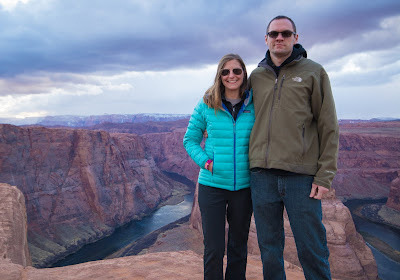 Saturday morning I was up a little after 5:00 to get ready for the race! After waiting around for the hotel breakfast to open at 6:00, we made our way to the start line with plenty of time before the 7:00am start. It was about 25 degrees out so I sat in the car as long as I possibly could before we ventured over to the start line, I said good-bye to Scott (and to plan on me finishing in about 8-9 hours) and then was off right at 7:00am!

The first few miles were spent numb to the cold as I attempted to warm up. We were very packed together as we made our way out a couple of miles along a very sandy trail before passing by the Slickrock Aid Station at Mile 2. It was so early in the race, I ran right passed it and continued on 3 more miles to the Horseshoe Aid Station. This station was where my drop bag was (which I would access at Mile 5 and again at 18). I had accidently put all of my fuel in the drop bag (so I had none to pack for the race), so I quickly grabbed that from my bag, had some water (since my hydration tube had frozen), snapped a quick picture with Skirt Sports Ambassador Heather who I had a chance to chat with for a mile or so at the beginning, and then headed out. We had to cross a highway, and then we made our way uphill to the Horseshoe Bend Overlook - the same spot we had hiked to the night before. It was once again beautiful, but I was sure glad we had gone the night before because the sun was so low in the sky that it made for some extremely harsh shadows which preventing me from getting any good pictures of the river! 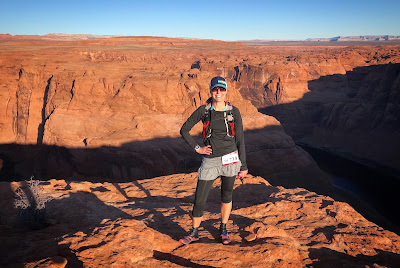 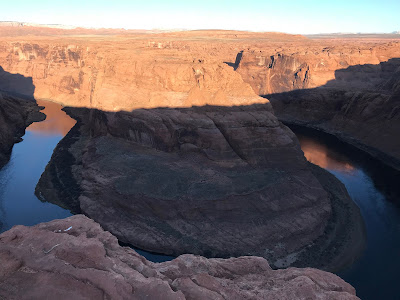 Despite not getting great photos, I still took a bunch anyways, as I continued on for several miles along slickrock overlooking the river in many places. Overall I'd say this course was very runnable, but this was definitely one of the slower portions of the course, as my pace slowed to around 15 minute miles as we made out way up, down and around the slickrock. I ran back and forth with a bunch of the same runners from here until reaching the Mile 13 Aid Station, which was right before we would head down into Waterholes Canyon. 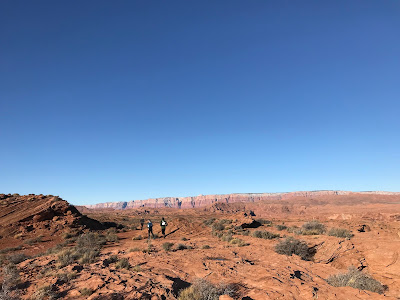 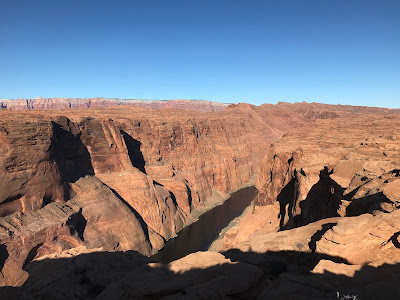 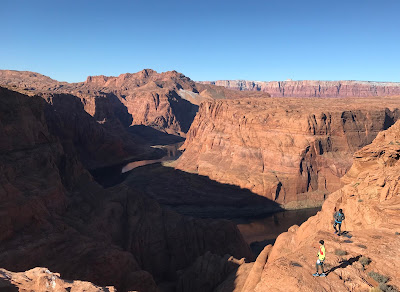 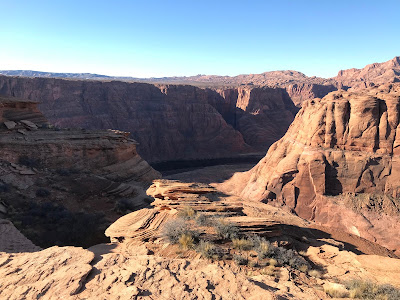 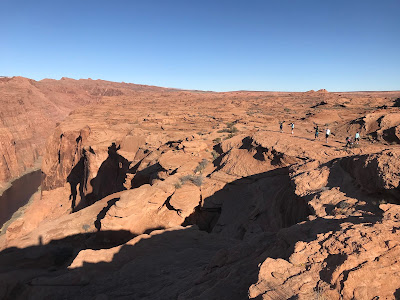 Waterholes Canyon was the part of the course I was most looking forward too. Afterall, it was the only slot canyon we ran through and that was why I signed up for this race. We had a very steep, technical descent downhill that I timidly made my way down, before ending up in the canyon. I knew from the course description that we would be in the cnayon for about 1 mile. I was feeling really good and definitely could have ran most of this...but, as previously mentioned, I came here to see this one mile...so instead this was my slowest mile of the entire race (by a lot) because I just kept stopping for pictures and having a blast with it! When I saw I missed 3rd in my age group by less than 5 minutes, I knew this caused it, but I still didn't care... I had a blast. I think about 50 people passed me as I just enjoyed this section! It was so cool and so beautiful... I mean, THIS IS WHY I RUN! I love seeing the amazing places we have in nature! 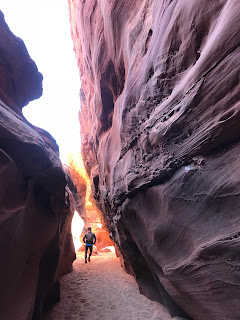 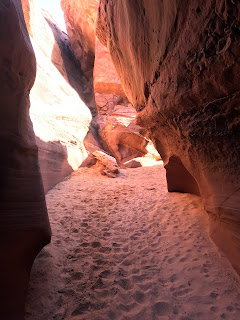 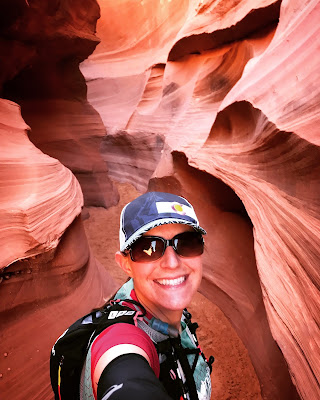 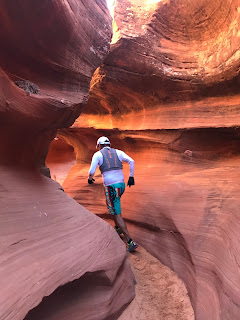 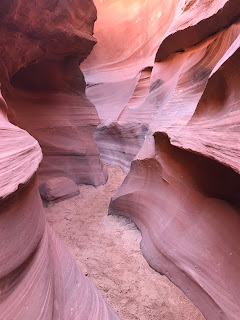 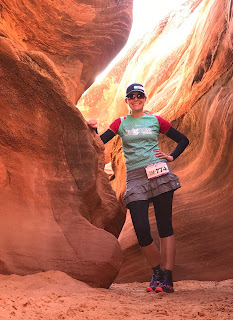 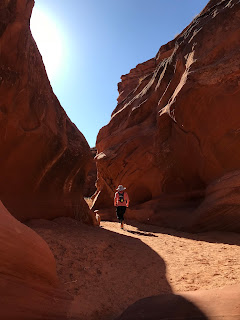 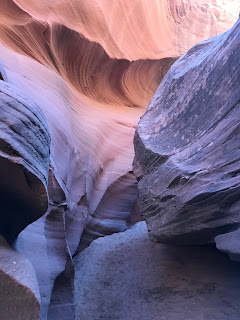 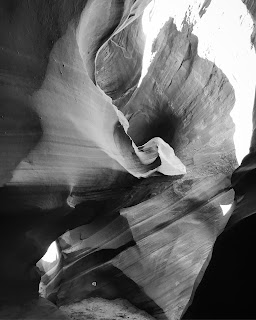 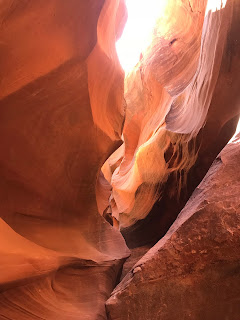 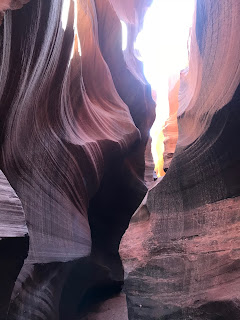 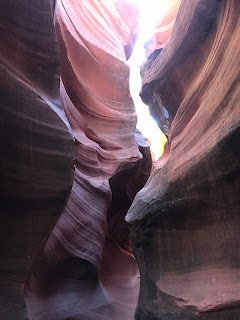 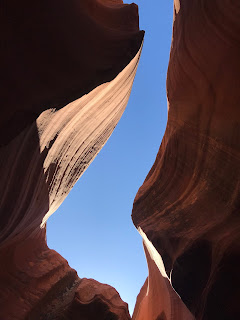 We had to ascend a ladder to officially exit the canyon, which was pretty cool! Once we did that, we still had some awesome wider canyon walls around us, but we were mostly out, as we continued on. After one more steep ascent, we topped out onto a sandy road that stretched for about 3 miles back to the horseshoe aid station. It was very runnable (despite being sandy - I think the moisture from the day before helped with that), so I did my best to make up some of my time and had a few of my faster miles of the day along this section. 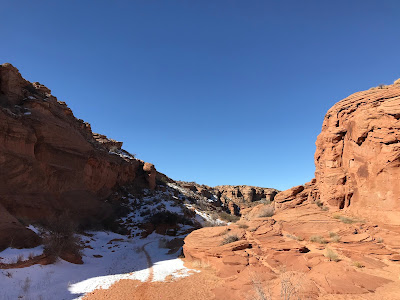 Once back at the Horseshoe Aid Station I had some snacks and coke and then made my way onward - back towards the start/finish area. We would retrace the first 5 miles from the morning, before turning off to do a loop around the Page Rim Trail. These 5 miles weren't overly technical, but they were slightly uphill and in sand, so that made it a bit of a challenge. Nevertheless, I kept at it, until we crossed another major roadway, then made our way up a short, steep ascent to get onto the Page Rim Trail where an aid station was awaiting us.


After getting some snacks, I headed out. I had read that this loop around the town was very runnable, so I decided to try and keep my pace up as best as I could. Well - they definitely weren't lying when they said that, especially on the first half because not only was it runnable, but it also seemed to be at a slight descent, so I really picked up my pace through here, passing a few runners. About half-way through this loop, you have to do an out and back to an aid station. I grabbed some more food and then took a look at my watch. They said I only had about 6.9 miles to go and I was only a little over 6 hours in... that meant I would be finishing way quicker than the 8-9 hours I had told Scott. So I gave him a quick call as I headed out from the aid station and told him to expect me under 8 hours, possibly much closer to 7 1/2. 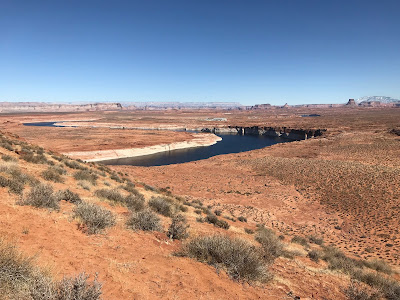 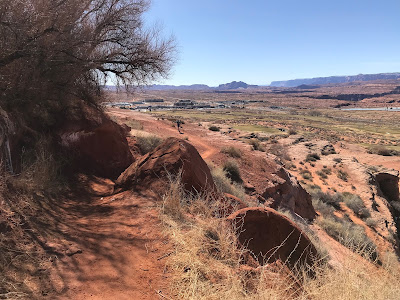 Overall, I still felt really good too. I was just over 26 miles in and still feeling like I could run a lot. Despite the course not being quite as fast as it had been on the first half, I was still able to run a lot and started passing even more people. I felt good knowing I was passing a lot of the people who had passed me while I was meandering in the slot canyon. In all honesty though, I couldn't figure out how I felt so good - I was running around 10-11 minute miles, which for trails, is pretty quick for me! We had several road crossings, as the trail made it's way through town, including one that went really close to our hotel. Finally, I was back at the Page Rim Aid Station where I just ran straight through, then dropped down from the rim and made my way the last 3/4 of a mile to the finish line, finishing in 7:16:52 - way faster than I had expected! 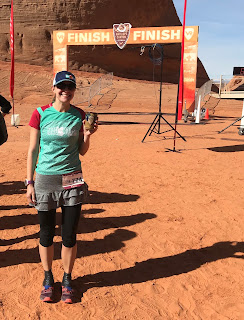 
Overall, I really did enjoy this race. I had heard to be prepared for a ton of sand that was difficult to run in, but I really didn't feel like it was bad at all. I think the snow and rain that Page had gotten in the days leading up to the race kept the sand nice and packed down. I spent the first half enjoying the views and running nice and slow and then was able to really pick things up in the back half - which I think might be one of my first times to negative split an ultra marathon! I was also surprised at how good I felt over the entire course of the race - which I really think has more to do with my road training I've been doing this spring - I've really been working hard and getting faster so I think my slow and steady mentality at the beginning of the race helped me to be able to really pick it up later on.

As far as the race logistics went - this was my first Ultra I've ran by Vacation Races, but I've done some of their other events (Grand Teton Half Marathon, Grand Circle Trail Fest, and Rocky Mountain Half), and they once again did a great job. The aid stations all seemed to have a lot of great options. The finish line had great food and I got a really yummy freshly made Pizza after finishing. Parking, directions, and course markings were great. I would definitely consider doing one of their Ultra's again sometime!

Overall I'm glad I had the opportunity to check out this unique and beautiful area and definitely hope to come back someday to see the actual Antelope Canyon!