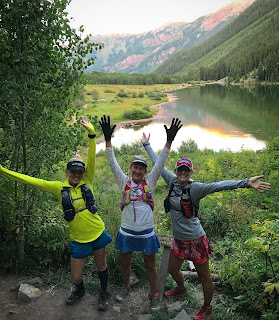 Climbing over four 12,000+ foot mountain passes in 28 miles, Four Pass Loop has some of the most amazing scenery Colorado has to offer. It is often traversed by backpackers over the course of 3 to 4 days... but ultra runners on the other hand, like to do it one (very long) day!

I can't remember when I first heard about this route, but whenever I did, I knew I had to give it a try! Last year a couple of us tried to organize running this in the Ultra Dirt Diva's (a facebook group of bad a$$ lady ultra runners) but we could never agree on a weekend... so when Jenn posted this year that she wanted to do it on August 27th - a date I was surprisingly free - I jumped at the chance! Was doing a crazy long, hard run with a 2 1/2 hour drive home on a Sunday the best idea? Probably not...but #YOLO, right?

This route is not that much longer than a trail marathon, but given some other reports I had heard from people, I had a feeling this was going to take a lot longer than even Pikes Peak Marathon due to it's high altitude with over 8000' of elevation gain and fairly technical trails. I did Pikes Peak in just under 8 hours, so I was thinking maybe about 10 hours for this one... oh how I was mistaken (it took us THIRTEEN - good thing it was totally beautiful and totally worth it!).

We had three of us all set to go - myself, Jenn, and Carolyn. I had never met either of them before, but they knew people I knew, so I assumed they weren't ax murderers! We had the added bonus of Carolyn having a friend who lived in Aspen whom very graciously let us stay with them the night before. They were the kindest hosts and we were very appreciative of a comfortable, warm bed to sleep in (as opposed to our cars which had been a preliminary plan until we found out that car camping is not allowed at the Maroon Bells parking lot).

We were up nice and early the morning of our trek and made it to the trail head just as the sun was rising around 6:00am. After a few pictures, we were off!

Despite being the steepest and most consistent climb of the day, the 5 miles up to Buckskin Pass went by so quick and easy... I guess that's what fresh legs do for you! The first 1.7 miles are fairly gradual as you head up from Maroon Lake to the junction which starts the loop. To head up Buckskin first, you head right at this junction. We made this turn and began a very steady and steep climb up to Buckskin. With about 1000' left to the pass, you come across the most AMAZING valley of wildflowers - we might have stopped for awhile here just taking pictures and enjoying it (I may have sang "the hills are alive), before finally finishing the ascent up to the top of Buckskin Pass. 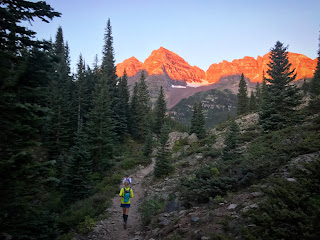 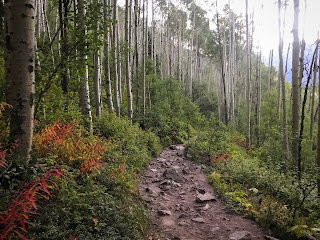 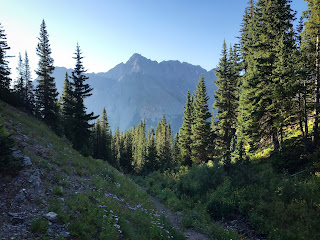 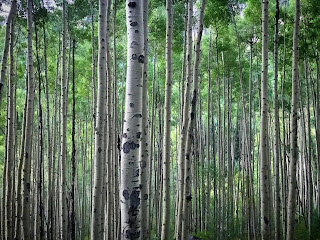 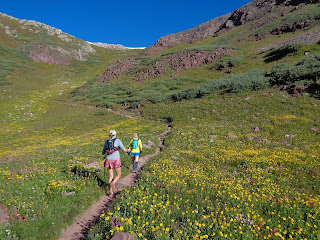 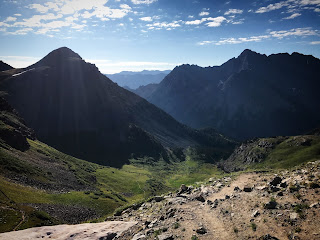 From the top of Buckskin Pass, we began our descent... which also meant running for the first time! A lot of the day ended up being hard to run due to extreme steepness and technical trails, but this section was one of two fairly runnable sections (the other being Frigid Air Pass down). We headed down for about 2 1/2 miles before having a rolling mile prior to starting the ascent to Pass #2. Shortly after the major ascent starts, you come across the incredibly stunning Snowmass Lake. Seriously - this lake rivaled the beauty of Ice Lake in the San Juan's - it was incredible. And huge! I think we might have wasted 30 minutes getting pictures here - we would stop for a picture, but then we would get a better view further up and take more... it was worth it though! Finally, it was time for the final push up to Trail Rider Pass which went through amazing wildflowers again before reaching the top at 12,420'! We spent a little longer at Trail Rider than we had at Buckskin, taking a few minutes to fuel up before starting the descent. 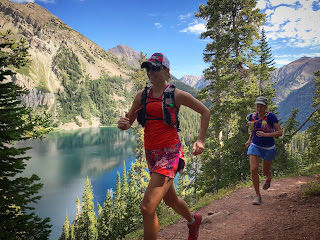 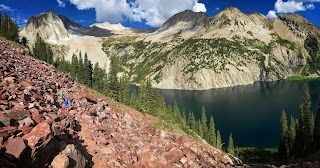 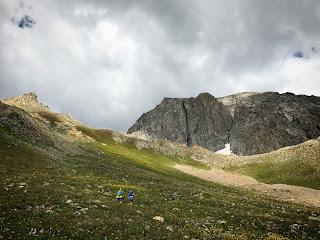 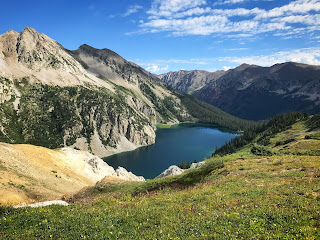 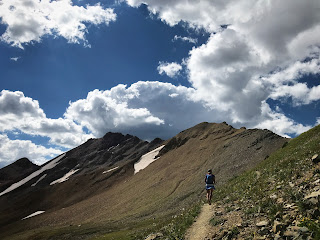 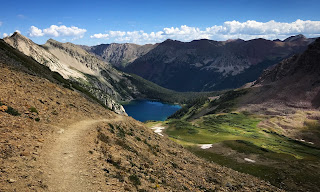 The descent from Trail Rider Pass down went down, down, and more down... FOREVER. It was super steep and super rocky and technical, which meant not a lot of running. This was by-far the longest section of the route. Even once we finally made it to the low point, we had many miles of rolling trail before we would start the ascent towards Pass #3. Along the low point of this, we also had our only full blown water crossing of the route, where we also took the time to refill our packs. It was my first time using a water filter, and it worked out okay, although I would probably buy a different once next time).

Once we crossed the stream, we had another mile or two before a waterfall marked the start of the ascent towards Frigid Air Pass. This ascent was also one of the longer ascents too - as it went through these overgrown bushes and were a bit of a pain to walk through with my treking poles (because the trail wasn't wide enough and they kept getting caught in it). After what felt like an eternity, we made it out of the bushes and into pretty wildflowers again for the final mile to the top! 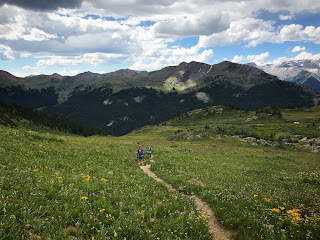 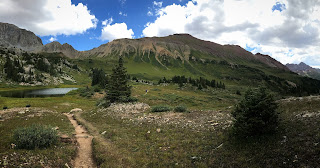 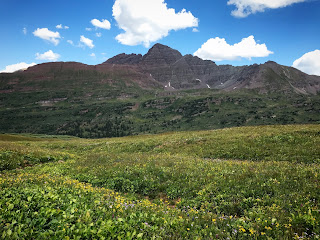 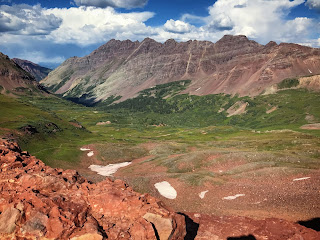 Frigid Air Pass was probably my favorite of the three passes. It was pretty, not too windy, and had amazing views of the backside of the Maroon Bells in one direction, and over towards Crested Butte in the other direction. We stopped at this one again for a bit to fuel up before starting the descent. The first quarter mile off of this pass was extremely steep again which I struggled with, but once we got past that, we had the most runnable section of the entire day. Absolutely gorgeous, non technical single track for a couple of miles...it was stunning, and definitely my favorite section in terms of "running".

You can run this route in two directions, and one of the reasons we chose to run it counter-clockwise was because you only drop about 750 feet between Pass 3 and 4 - that means way less climbing in the later part of the day...and boy was I glad we did it this way! Sure enough, after our incredibly awesome downhill running, we only had a short ascent to reach the top of West Maroon Pass - our last pass of the day! 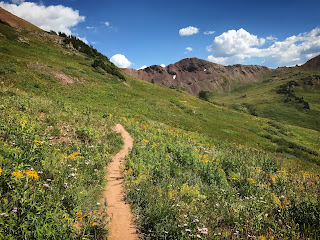 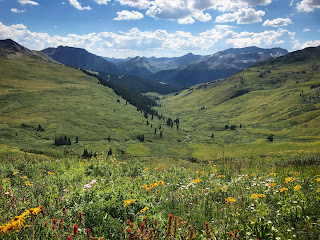 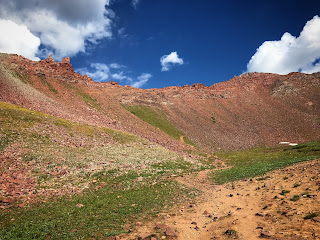 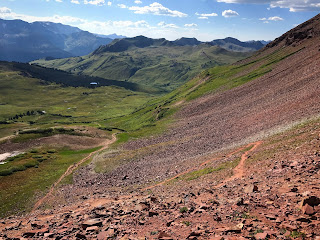 We reached West Maroon Pass around 4:00pm - much later than we had anticipated when we started out...but nevertheless, we reached it! After a good 5-10 minutes of refueling and taking in the views, we started our last descent! We were almost done... Or so we thought. The 6.5 miles back to Maroon Lake were the. longest. miles. ever. Seriously - I don't know if it was just because we assumed the last miles would be easy since they were downhill, or if we were all just tired from a full day, or that we were mentally a little worn out since it took a lot longer than planned, or that this section of trail was quite possibly the rockiest trail I've ever been on...(all of the above), but this was the longest descent. We supposedly had just 4 miles to get to Crater Lake, and then 1.7 back to the car / Maroon Lake. Crater Lake took forever to arrive....

Nevertheless we EVENTUALLY made it to Crater Lake, and then the 1.7 miles from the junction to Maroon Lake. Seeing Maroon Lake come into view was one of the best feelings ever! We also finished right as sunset which was just the perfect ending to an incredible day. Tough, oh yes... but also INCREDIBLE. 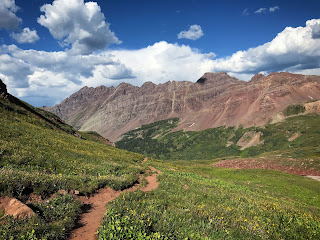 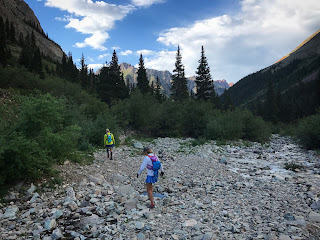 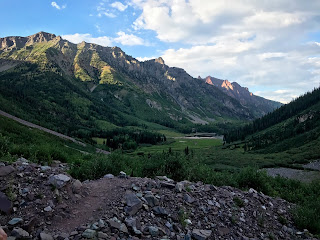 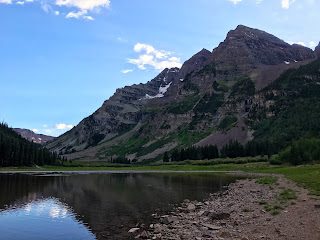 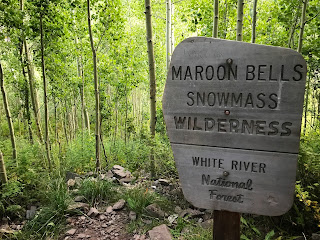 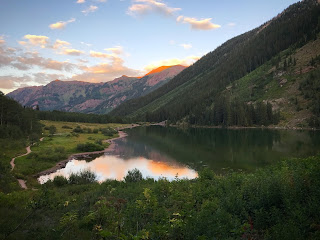 This is usually something I only do for races...but I seriously cannot recommend this route enough. I always talk about how the San Juan Mountains are the prettiest mountains in Colorado...and while I still agree with this, I also cannot deny that the Elk Mountains give them a serious run for their money. Everything about this route was incredible and left me feeling SO, so happy that I discovered the amazing joy that traveling into remote wilderness areas on your own two feet can bring you... Despite growing up in Colorado, I didn't truly see any of it until I started hiking in 2011. I cannot stress enough how much doing things like this can change your life for the better... you don't have to be fast, you don't even have to be an ultra runner that covers this kind of distance in a single trek - you just have to get out there and do it - whether it's over 1 day, or 10 days. Just getting into the wilderness and seeing this amazing scenery that only your own two feet can take you... it's incredible.

Now - stats wise, there's a lot of different websites that talk about this loop and have it listed as anywhere from 26 to 28 miles. We actually ended up with 29 on Jenn's garmin (mine died after 8.5 hours). The total elevation gain is about 8000' of gain (and 8000' of loss). You're pretty much going up or down at all times. The route is very, very rocky and technical. I have ran 4 of 5, 50 mile races in LESS TIME than it took to do this - so be prepared for a LONG DAY. We did cover this very leisurely, stopping for a lot of pictures..had we taken it faster, we probably only could've taken up to an hour off...plus I honestly don't recommend that anyways. If you're going to take the time do this route - be sure to enjoy it!

If you are contemplating backpacking vs. ultra running it...I have mixed thoughts. On one hand, backpacking it would mean you'd have a lot more time to really take it all in and enjoy...but on the other hand, I cannot fathom how much more difficult it would be to carry a 30+ lb pack over four extremely high, extremely technical mountain passes! So that would have to be a personal choice.

So there you have it - definitely a top hike in the state of Colorado, by far!