After running the Mt. Sneffels Half Marathon the past two years, I knew it was time to go for the full this year! Especially considering I'm training for a 100...I need all the miles I can get, right? Add to the fact that the terrain of this course is very similar to what my 100 will be. Double, why not? So it was set. Now the only thing to consider was that this was only 2 weeks out from my 100...which is kind of, sort of when I should be tapering. So I just figured that was the perfect excuse to take this extra slow and not worry about time (not that I have really been worrying about time AT ALL this summer anyways). I was set. Easy Peasy.

Another local runner and I decided to drive up the morning of - which worked well, but made for an early morning (left at 4am!). We made it to Ridgway at about 5:45am, which was just enough time to relax a little and get ready for the 6:30am start.

The big difference between the marathon and the half marathon is the amount of participants. Between the two races, there are about 800 people. But about 700 of them do the half and only 100 do the full. That means it's an entirely different atmosphere for the full marathon. Much more of a "small town" feel - where you're all just standing around the start and you can see everyone (as opposed to the half where you're all clustered together with long port-a-potty lines and it just feels like there are TONS more people). The full is also significantly harder - as it has about 1000' of elevation gain as you make your way from Ridgway to Ouray before turning around and heading back (so the half, alternately has about 1000' of loss). There's no "big" hills on the way out, but it's a gradual uphill almost the entire way which just gets tiring after awhile and definitely keeps your pace pretty slow.

So when the gun went off I knew I would just be taking this nice and easy from the get go. Which was why I also had no problem stopping for some pictures of these gorgeous horses less than one mile into the race: 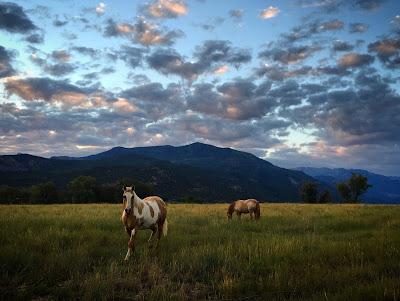 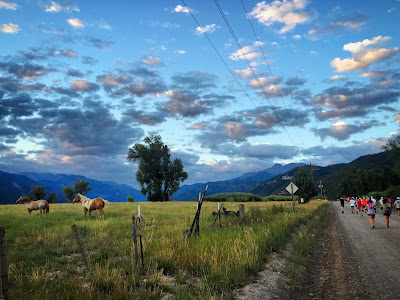 The second mile has some steeper grade uphill, so I walked a little there. After mile 2 though I did settle into a pretty steady run for the next 7 or 8 miles, which the exception of taking a couple of quick pictures here and there, and walking so I could take off my long sleeve shirt around Mile 5. 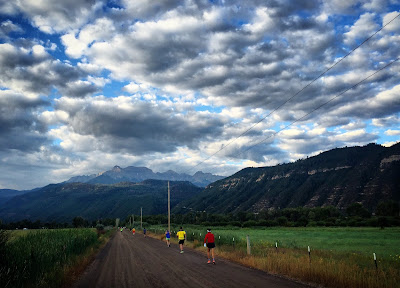 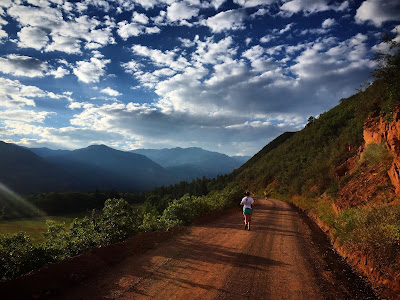 At about mile 8 was when the leaders in the Half Marathon passed us on their way out. It's pretty neat to see, as they are so fast (that's the other thing about the Half - they actually have some elite runners run this - pretty cool). The next 3 miles were spent passing all of the Half Marathoners as they made their way towards Ridgway. Finally at about Mile 12, I made it into the town of Ouray and slowly worked my way to the turnaround at Fellen Park. 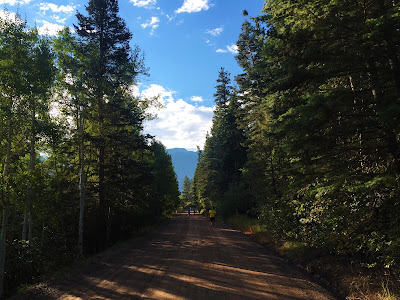 About a mile or so after the turnaround, I ended up settling into the same pace as a guy from the Front Range, so we spent the next 11 or so miles chatting which was nice and really helped the time go by! I always like swapping race stories and hearing about which races people have done and which ones they like etc. We ran pretty much the entire way until the out-and-back section where we started mixing in some walking. I also snapped this picture: 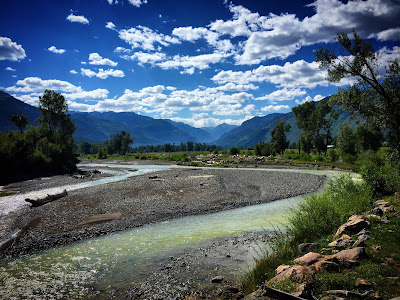 After the out-and-back, we had just over 2 miles to go, including the big, "hill". I always talk about this hill in my Half Marathon posts, but since I knew I had no time goals and therefore, I knew I would be walking it, it didn't really bother me this time around. As I suspected, as soon as I got to it, I walked up the hill, then grabbed some chocolate from the aid station and continued my way towards the finish. With a little over a mile to go, I realized I could get under 5 hours so long as I didn't walk too much. After a couple of breaks, the guy I was running with told me I'd better go ahead if I still wanted under 5, so I did. I picked up my pace quite a bit and just barely squeezed in under 5 hours, with a time of 4:58:38.

Overall I'm glad I finally ran the Full Marathon, but I'll probably stick with the Half Marathon going forward. It's a much more enjoyable downhill half, than an uphill full! But, as a race, it's always put on really well and a great way to see Ouray and Ridgway. You also get 1/2 price entry into the Hot Springs with your race packet, and you can't beat that!

One of my favorite things about this race is all of the swag with Mt. Sneffles on it. I've said it before and I'll say it again, Mt. Sneffles is one of my favorite mountains (to look at, NOT to climb). This years swag was some of the best. In addition to the usual shirt and bag, we got socks, a hat, AND a calendar. And, the finisher's medal was different this year (which was exciting, since I've gotten the old medal two years in a row). 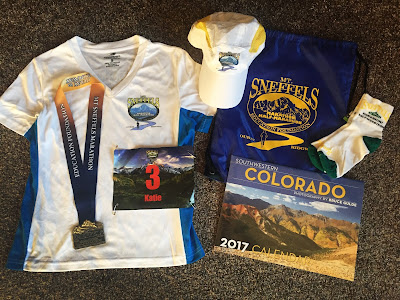