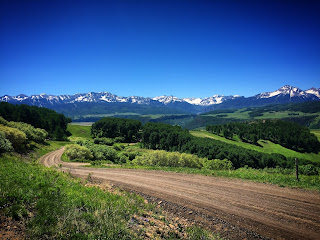 I'm now in full-blown training mode for Lean Horse 100 in August, and so I knew I needed to get a 50K (31 miles) in during late June as part of my training. Unfortunately, I couldn't find any races nearby so I just decided I would do my own instead. I'd always wanted to traverse Last Dollar Road - a dirt road that runs from Dallas Divide (west of Ridgway) into Telluride. I have read mixed reviews on whether this road is passable in a low-clearance car, so I figured running it would be a great excuse to finally check it out.

Planning it was a bit on the difficult side - the actual road is about 18 miles one-way from Ridgway to Telluride. I was definitely planning to do an out-and-back, but wasn't sure how doing the entire 15 out one-way would work since the forecast was calling for HOT temperatures and I would have no way to refill my water along the route. Thankfully, a few days before, my friend Laurie said she'd come along for the first part of it. Problem solved - we would drop my car at the beginning and drive her's a way's down the road, and I could leave water at her vehicle.

We met in Ridgway at 7am on Saturday morning and drove up Highway 62 to Last Dollar Road. There was a perfect pull-out not too far off the highway where I left my car and hopped into hers. After getting slightly lost (well, missing the turn), we ended up having to back track, but finally parked about 5 miles away from my car. I left 1 bladder of water at her car for her to leave out for me and then we started our run.

It started off gently uphill before getting a nice half mile or so of downhill and then ALL THE UPHILL. For 5 miles and at least 1500' of gain. Okay...the fact that it was called "Last Dollar Road" and not "Such-and-such Pass" had me thinking this wouldn't be THAT bad. Boy was I wrong. I essentially settled into a nice uphill power hike for 5 miles. At about 5.5, Laurie headed back to her car and I was on my own for the remaining 25 1/2 miles (wow that sounds depressing - I'm glad I didn't calculate that at the time)! 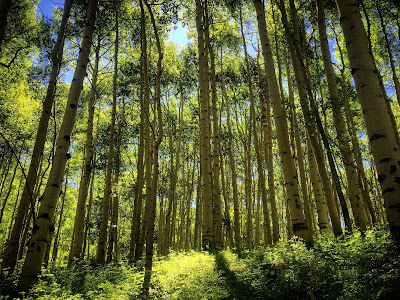 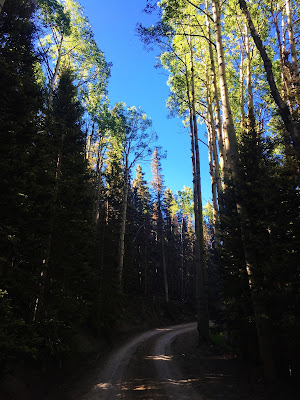 We had mostly reached the high point of the road when she headed back, so that meant I now got to run downhill towards Telluride. And IT. WAS. HEAVENLY. Seriously, THIS is why I endure the uphill. For the amazingly blissful downhill miles to the most gorgeous views of the San Juan Mountains. It was wonderful. Definitely my favorite part of the run! I ran down, down, and more down for 5 miles total. I needed enough distance that I could have kept going further towards Telluride, but I decided against it. Turning back now would mean that I would have to add mileage later on, which I'm never a fan of (it's pretty tough mentally to add mileage at the end when you just want to be done!), but I knew that if I kept going "out", I'd drop another 1000 feet - which would mean another 1000' feet on the way back. Additionally, it would put me at 25-26 miles before I had access to refilling my water. I know from experience that I typically run out of water around 20 miles. So I figured I had better turnaround now. It was a HOT day, and running out of water would not be good. 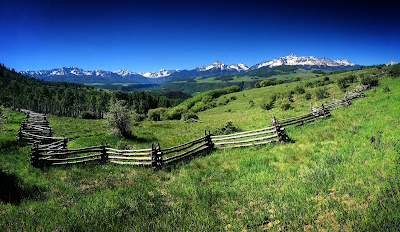 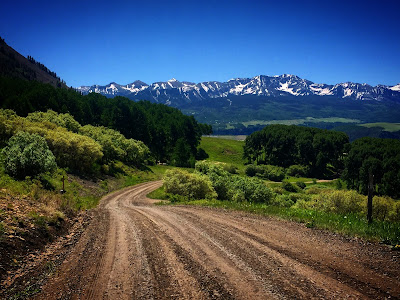 So I turned around and run/walked/hiked back up the 5 miles I had just descended. It was definitely not as much fun, especially the last mile towards to the top. That was a struggle and my longest mile of the day. I hadn't done this much climbing in a LONG time, and I could feel it wearing me out until FINALLY I reached the high point again. I took a quick break to enjoy the views again before starting another descent. I was now 15 miles in, and I'm not going to lie, I was much more tired than I had hoped to be by mile 15. All the climbing had really gotten to me. But at least I was going "down" again for awhile and could hopefully recover a bit. There was a great overlook about a mile into my next downhill section so I stopped there for a minute for some pictures and kept going. Another mile down there was a pretty good shady section, so I decided to back-track and add two miles by turning around for one mile and running back down it (while I was in some shade). I then kept at the down all the way back to our starting point. About 1 mile from where we started (and where my water refill was waiting) I ended up running out of water, but thankfully, just as I had planned, my refill was waiting for me. I was at about 22 miles at this point. I refilled my pack and stopped for some snacks before heading back the 5 miles towards my car.


It had been so long since we drove it that morning that I really didn't remember much about this section. It ended up being a mix of nice gradual up and downhills. I was extremely tired and hot by this point so I was moving MUCH slower than I wanted - walking A LOT - but I kept moving and that's the most important thing. It was tough mentally - I kept thinking, "how in the world am I going to run 100 miles if I am this tired doing 30?". But I kept at it. With about 2 miles back to the car came the most amazing views of the Sneffels Range (my favorite view in the state of Colorado). That helped boost me mentally a bit - along with the fact that the route became a bit of a steeper downhill, so running was easier. I continued on and finally made it back to my car at Mile 27. 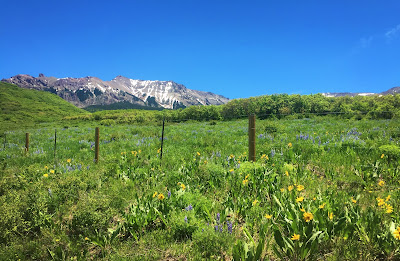 Now was the tough part though. It had been SUCH a long day and I was exhausted. 27 miles is pretty good right? Did I REALLY need to go back out for 4 more? Honestly, probably not. I'm sure 4 miles doesn't mean much in the scheme of a full training cycle. BUT I knew it would bother me. I knew when the going gets tough in my 100 that I would probably think back to that, and it wouldn't help my mental game. I'd think about how I had quit. On top of that, I had also told several people I was doing this and I didn't want to come up short (would they actually care? Probably not - but it helped me to justify going back out). So I did it - I refilled my water again and headed back up the road I had just descended. I mostly power hiked, but I told myself that was okay. You're going to be power hiking in the ultra. All that matters is time on your feet.


I kept going and going. Of course every mile was SO slow and took so long. But finally I made it back out 2 miles - back to that gorgeous spot with the views of the Sneffels Range. Took a moment to remember why I was out here and what it is I love about running in the mountains. And then I turned around, turned some music on, and ran back down to my car - finishing 31.5 miles with 5,084' elevation gain, and feeling oh so happy (and proud of myself for sticking with it and finishing ALL 31 miles)!

So of course, that day, I was feeling pretty discouraged. I was exhausted by Mile 15 and slogged through a run/walk to finish all 31.5 miles. But, now that I've had time to think about it I feel better. For starters the route I choose had WAY more elevation gain than I had planned for, and given that, my average pace was not bad AT ALL. Plus the fact that of course I was slower than I'd be in a race because of lack of crowd support and just that general feeling of knowing the clock is ticking. I also had no aid stations and had to rely solely on what I brought (with a little bit of extra water waiting for me at mile 22 miles). This was also one of my first long "trail" runs in long time (even though it was technically a dirt road). I had done a 22 mile road run a few weeks prior, but the added time per mile really adds up in trail and mountain running - which is just something that takes time to adjust to. I've now had 2 long runs again in the weeks following - an 18 and a 21, both on trails and they felt better (obviously I know that is still a lot less than 31 - but I felt like I could keep going). I think there is just a transition period when you get back into trail running, and I feel like I'm now doing better getting used to it. Obviously, I still have a lot of work cut out for me and that 100 is NOT going to be a walk in the park, but I am feeling better and I know this 50K helped! I look forward to continuing my training throughout the next month and half which will include at least one 50 miler!