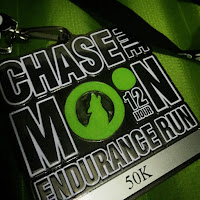 Last weekend I ran the Chase The Moon 12 Hour Endurance Run. This is a night race, ran from 7pm to 7am on the Highlands Ranch back country trails. They have a solo category along with a 3 person and 5 person relay. I signed up for the solo division several months back with the intention of it being my longest training run before Lean Horse in August.

But the more I thought about it, the more I realized that with it being held at night, I would probably be running much slower than normal and therefore I probably wouldn't end up getting nearly as many miles in as I wanted before the 12 hours was up. So I ended up doing Leadville Silver Rush 50 a few weeks prior in addition. That put this one less than 2 weeks after my 50, so I decided to just take this one easy and use it as a training run to get some good night experience in. And I'm pretty happy with my decision. I told myself I just had to do a minimum of 3 laps, which would be just shy of a 50K at 30.9 (although according to my Garmin I ended up with 31.4 - so definitely at least a 50K).

The race started at 7pm on Friday night in Highlands Ranch - a suburb of Denver. Luckily, it just so happened that I had a couple of work appointments that I could schedule in Denver during the day on Friday, so I ended up heading over Thursday night. Of course driving to different appointments all over the city actually ended up being kind of exhausting and I was pretty tired by the time I finally made it over to the race start a little after 5. Nevertheless I set up my tent and got ready to race.

The weather was super iffy as the race start drew closer, but thankfully it never did really start raining aside from a few drops. I ended up meeting up with several ladies I had met online and hung out with them and their awesome home base they set up - a canopy complete with sparkly lights, and music, along with glow sticks we could all wear!


LAP 1:
We started right at 7 and I kept an easy pace from the get-go, including walking some not very steep hills in the very first mile. I ended up settling in with a few other solo runners who all had the same "slow and steady" mindset as myself and we chatted a little off and on until the first aid station which was around 4 1/2 miles in. I grabbed a few snacks at the aid station and then headed out to what would be the biggest climb of the loop course. It went well though and there was an insanely beautiful sunset we got to witness as we made our way up. It truly was one of the most unique and beautiful sunset's I've ever seen... this is what I love about running! You get to see some pretty amazing sights! After stopping about 15 times for photo's, I finally made it to the top of the climb where you leave the single track for a nice wide gravel path for about 1/2(?) mile or so until doing a small loop on some more single track - then back on the wide gravel path for some nice downhill to the start/finish area. I finished lap 1 in about 2:10 - my fastest of the night (no surprise there) just as it got dark.

LAP 2:
After grabbing some food I quickly headed out for Lap 2. The race rules state that you have to switch directions every lap - so this time I headed back out the way I had just come in (clockwise instead of counterclockwise). I think it's so you're seeing people before they need to pass you and/or that you just see more people in general which is kind of nice when out on the trails alone in the dark. Whatever the reason, I headed back out, this time going UP the gravel path. I took out my Nathan handheld flashlight for the first time to try it out...and did not love it. I really can't seem to get the lighting thing down when it comes to running in the dark. Headlamps make my head hurt, and this handheld light was supposed to be angled perfectly for running...well it wasn't. I had to hold it weirdly. I eventually just got used to it and it wasn't so bad. It was definitely the brightest light source I had brought, so I think it was best for the situation...but it's leaving me still uncertain as to what I will use at Lean Horse. Back to running - I kept at it, doing the shorter singletrack loop, then back on the gravel path, then the longer singletrack loop to the aid station. Going this direction, the aid station was about 6 miles in, so I was pretty tired by the time I got here. I ate some food and had some soda before heading out for the last 4 1/2 miles of this lap. Sometime during this section I stopped to take a picture of the moon and could hear a bunch of coyote's howling. Right around the time that I could see no other people or the headlamps off in the distance - it was a little eerie. But I kept going and eventually finished lap 2 in abut 2:40. Much slower than the first lap, but it was VERY DARK out there and this whole night running is pretty new to me!

LAP 3:
I stopped at the start/finish area for a bit longer before heading out this time. Having lots of snacks, taking a bathroom break, and changing my shoes. I was already pretty tired and was NOT motivated to get going, but I also knew that the sooner I went out there, the sooner I would be done...so eventually I set out again. This time it was back to running the loop counterclockwise - so at least I only had 4 1/2 miles to the aid station. There's some good downhill on this stretch to the aid station so I tried to run as much as I could, but it was dark and I wasn't very motivated so it was pretty slow going. I eventually made it to the aid station though, grabbed some more snacks, said thanks to the volunteers and kept going. Only 6 more miles until I could go to sleep! When I had done this section in the first lap I remembered running a lot of it...but I definitely wasn't doing that this time around. LOTS and lots of walking. Finally after what felt like forever, I made it to the short gravel section...and then onto the last singletrack section...which was terrible. It was only 2 miles but it took FOREVER. There was a timing mat about 1 mile in and I swear I was never going to reach it. I finally did, and FINALLY made it back to the gravel road where I ran it in (kind of) to the finish - this lap in about 3:05ish, for a total time of 7:53:05.

After I finished, I grabbed some food and then paid $5 to try out Elevated Legs for 10 minutes - a compression system that goes over your legs - looks weird, feels kind of weird, but good at the same time. It is supposed to help with recovery I believe. After that I headed into my tent and attempted to get some sleep. I think it was about 4:00am by the time I fell asleep and I woke up several times, but finally got up at about 6:00am as it was getting light out and most people were finishing up. I tiredly packed up my tent and decided to head out at about 6:30 while I still had some energy (I figured the longer I stayed up the more tired I would get) and hit the road. I stopped in Georgetown for some breakfast then headed to the Vail area. Scott had the weekend off as well, and I didn't want to drive all the way home on no sleep, so the plan was for me to look for a campsite in the Vail/Minturn area and then he would meet me there and we would camp and then hike on Sunday. Well, after wasting an hour and a half, I found exactly 0 open campsites out of the 3 campgrounds I had looked up and so I just ended up driving all the way home. So in my attempt to NOT have to drive 4 hours, I ended up having to drive 5 1/2. GREAT planning skills Kate... It went okay, but I did have to stop in Glenwood Canyon for a 20 minute nap. We ended up driving up to Ouray the next day for a hike in Blaine Basin instead.


Post-Race Thoughts:
I did like this race, but I probably won't do it again unless I move back to the Denver area someday. The concept is nice, but the trails weren't my favorite. They were mountain bike trails (which I'm no stranger too since I run on them all the time here), but these ones were SUPER windy and a constant up/down/up/down which was kind of hard to find a good rythm for. Also, I thankfully didn't see any, but this area apparently has a lot of Rattlesnakes. There were signs all over the place and a few people reported seeing them. I also felt like 10.5 mile laps was almost too long for a timed race - I think it would have been more fun if they were more in the range of 5 miles or so, so you could see people you knew more often and stop by your "camp" (if you set one up) more often. All this being said, it is a really well organized, well put on race. The course was very well marked and they even had glow sticks out once it got dark. The aid stations were super well stocked and the volunteers were great. The shirts and finishers medals were awesome as well. If you live in Denver and are looking for a different experience, or night time running experience, I do recommend this one.

Pictures:
(I would normally post these with the corresponding part of the recap...but since this was a night race, these were pretty much ALL taken during the first lap) 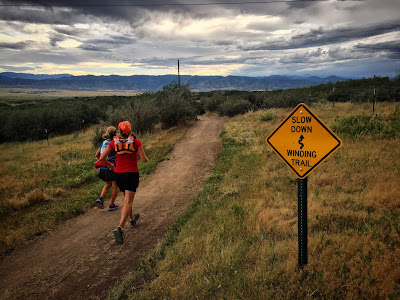 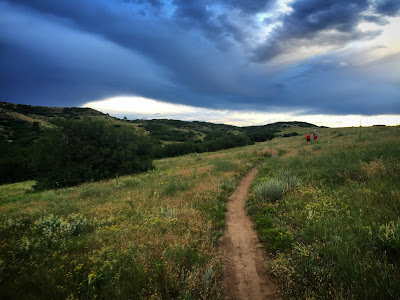 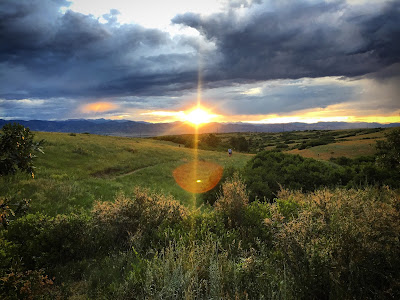 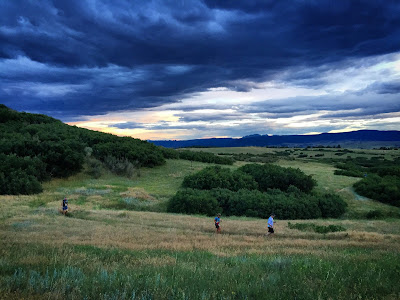 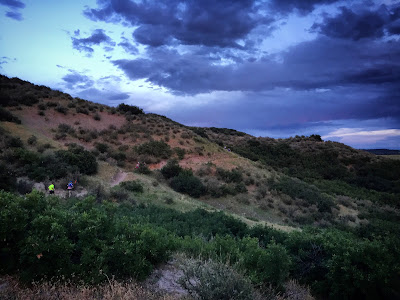 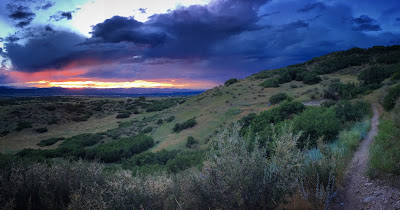 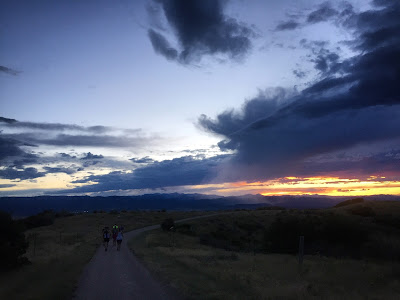 And here's a video I got of the coyote's howling. Pretty cool: