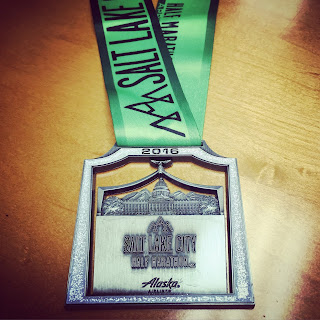 I'm a few weeks late in blogging about this one (surprise, surprise) - I was initially waiting for the race photo's to come out (because they were free downloads!), and then it just got overlooked. It was all for nothing though, as apparently there were NO race photos taken of me on this course (despite passing by several photographers on course and smiling as I ran by!). Anyways, without further ado, my race recap:

As some of you may remember, I signed up for The Salt Lake City Marathon MONTHS ago. I was going to use it as my goal spring marathon. However, the more I looked at the course profile, the more I realized that was a dumb idea since the course had some big hills in it (which are not my strong suit!). So, in mid-march I changed my mind and decided to run The Colorado Marathon instead, and drop to the half marathon at Salt Lake. It actually worked out nicely since Scott had the weekend off of work and we made a little trip out of it!

We hit the road after work on Friday and arrived in Salt Lake around 10:00pm. We stayed at the Sheraton Hotel in downtown Salt Lake - which ended up being PERFECT. I picked it because the rates were good and they have an awesome dog policy (we brought the pups along), not realizing that it was also only about 2 blocks from the finish line and the train that I took to the start (seriously - it could not have been more perfect - I highly recommend staying here if you do this race!).


Despite it being a very nice hotel, I didn't sleep super well as this was the dogs first time in a hotel and they were up pacing around all night (they were much better the next night thankfully!). The race start was at 7:00am, so I got up around 5, quickly got ready and then made the short walk to the train pick up. Thankfully there were other racers out, so I just followed some of them.

The train ride didn't take too long and I made it to the start just before 6:00 - in time to see the bike race start (they have a marathon-length bike race as well). This left me with an hour to wait around - I had hoped they would have coffee here as I didn't get a chance to make any at the hotel, but unfortunately they didn't (and it was COLD - would've been a nice perk). In general the race ended up being much colder than I was initially anticipating when I signed up - 30's, maybe low-40's at the finish. It was fine for racing weather, but chilly before and after. Finally it was time to shed my layers for gear check and head to the starting line. I had brought a mylar blanket from a previous race which worked well so I could keep it on after I shed layers, ditching it right as we started.

This race did have waves but they weren't heavily enforced (which was good, because when I switched from the full to the half they put me in the LAST wave without me realizing it). So I squeezed my way up so I was close to the 2:00 pacer. I didn't have a set goal (other than what my coach had prescribed which was to run easy through 9 and then pick it up for the last 4 - around 8:18 pace), but was hoping for under 2:00.

I started the race at a nice easy pace, and right away there were a few hills through some gorgeous neighborhoods. I just keep things easy - running the up hills slow and the downhills just a little faster. Around mile 3 or so, we headed into a more rural/wooded area which a nice long downhill section which was a lot of fun (and gorgeous too!). 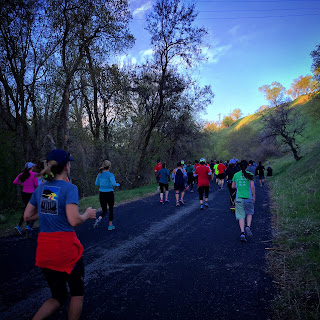 After 5 we headed back into the city running by Memory Grove Park (beautiful) then back through more neighborhoods. It flattened out for these, so I slowed a little, but still just took it easy and enjoyed it. Once I hit mile 10, I picked up my pace like I had planned. The first fast mile always takes some time to ease into, but by 11 I felt good and was having fun passing people. Around 11 1/2 - 12 we ran by Liberty Park, which was just gorgeous, before finally heading into the last mile where I really picked things up finishing my last mile at a 7:47 pace! 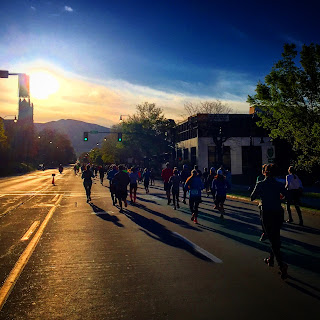 The finish line area was awesome, although the weather made it a little hard to enjoy - it was sunny out, but low 40's, which after running is COLD. But they had pancakes (although the line was crazy, so I skipped this), photo areas, free massages (I did get one of these because the line hadn't gotten busy yet!), and I think a beer garden. Since Scott had the dogs, I just grabbed some snacks, my free massage, then headed over and we walked back to the hotel. Again since it was a COLD morning, I wasn't wanting to stick around too much.

Overall, I did like this race a lot (despite not getting any race photo's - I am still disappointed by this). It was well organized, they had great swag. If it wasn't so far, I would definitely do this one again! 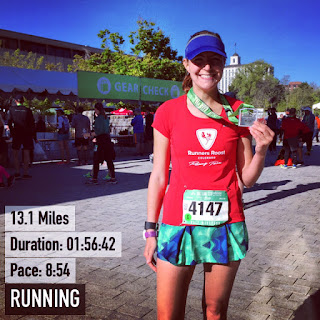 
After the race, I grabbed some breakfast from McDonalds (it was across the street from the hotel), and then took a shower before we headed out to explore a little. We went and checked out the Great Salt Lake (it was SO windy and cold though) and then explored Mill Creek Canyon (I had wanted to check out Big Cottonwood Canyon, but it is a watershed, so the dogs wouldn't have been able to get out of the car) for a bit. The next day, we stopped in Spanish Fork on our way back home and hiked to the Fifth Water Hot Springs, which was really neat! Overall, this was a fun trip and I was really happy to spend it with Scott and the pups - this was actually our first trip all together since we adopted Loki in the fall! 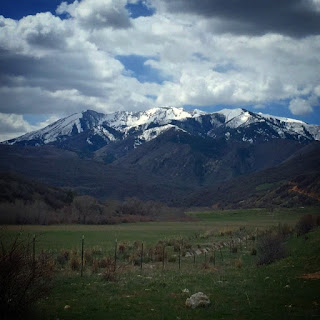 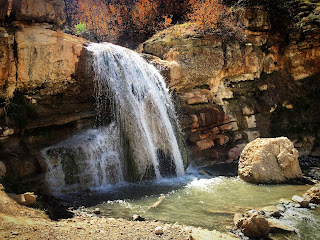 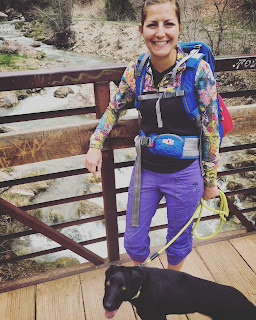