Considering the fact that I started this blog with the sole intention to document hikes, it is very fitting that my 100th post would be recapping hikes (as opposed to running - which is what the majority of my posts are these days).

My how things have changed since I started this little blog three years ago though. Just for fun, I went back and read my first post, just to see what's changed. Here's a link to it. The main thing that stood out was a summer bucket list I had created. Let's see how well I did:

Summer 2012 Bucket list:
1. Visit and Hike in Moab - Check! (and check, check, check)
2. Camp at the Great Sand Dunes - Check!
3. Camp and visit Telluride - Check!
4. Hike from Crested Butte to Aspen - Still haven't done this one yet :(
5. Hike into the Black Canyon of the Gunnison - Still haven't really done this yet - I didn't realize how technical most of those are (practically climbing). There is a hike on the northern end - Ute Trail that I'd like to do sometime in the fall or spring that kind of gets you close
6. Hike Mt. Sneffels - Check!
7. Hike a summit before dawn and watch the sunrise -Check!
8. Hike half of the trails on our Ouray Topo Map - kind of Check - not sure I've done "half", but I have done a lot of Ouray hikes by now!
9. Hike on the Grand Mesa - Check!
10. Drive the Million Dollar Highway from Ouray to Silverton - Check!

So, overall: not too shabby! I have done quite a bit in the last 3 years. But, one thing I love about the Rocky Mountains is that no matter how many hikes I manage to get in, there's still WAY more out there! I could spend the rest of my life hiking new trails around this state and not get them all done!

Which I fully intend to do, by the way, especially after my awesome weekend in Lake City that left me with a bit of a Rocky Mountain High, that's for sure! I crossed 2 more fourteeners off of my list, including my first ever Class 3 fourteener (the peaks are ranked by difficulty up to a class 5) by hiking Wetterhorn Peak (14,015') and Handies Peak (14,048'). And the views: once again AMAZING. Seriously - the San Juan fourteeners are by far the most gorgeous - the area is just so incredibly green and amazing. So without further ado - here are some short recaps with TONS of pictures:

Truth be told, when I rolled into Lake City on Friday night, I had no intention of hiking Wetterhorn. I wanted to do Sunshine and Redcloud - a two-fer (two peaks, one hike) also in the San Juan's. But unfortunately (although, spoiler alert - it turned into a "fortunately" because I LOVED it) no one else was up for those two and my only options were Wetterhorn or Uncompahgre. I had hiked Uncompahgre last year and while I absolutely loved it (one of my favorite peaks thus far), I kind of wanted to bag some new peaks rather than do a repeat hike (too many peaks to see, not enough time!!). So, despite my incredible fear over the words "Class 3", I decided to give it a shot. I figured if it was "that bad", I could just turn around (of course, they always seem worse on the way back down - in which case turning around isn't really an option). So, I went in with one of my favorite quotes and never looked back:

"You can't fall if you don't climb, but there's no joy in living your whole life on the ground."

I love this quote because not only am I fairly timid when climbing mountains - so it has a very "literal" meaning to me, I also just love the concept. There's no fear of failure if you don't try something new - but there's also no joy in that either! Experiencing new things, shooting for a new goal, etc. are what make life worth living - whether or not you succeed at those endeavors!

So anyways, I repeated that quote to myself during the more difficult sections of this hike. But I am once again getting ahead of myself...

We ("we" being myself and fellow "Western Slope Adventures" - people from a local meetup group) left our campsite in Lake City a little after 5:00am and drove up to the trailhead. Now keep in mind, that even though we're in Lake City which is very close to everything, it still took us about an hour to get to the trailhead because of the rocky, 4WD terrain. So it was more like 6:00am by the time we got started. The trail is a very well defined trail with a decent amount of elevation gain for the first 3 miles:

It's the last mile where the tricky parts begin. Overall, I actually ended up doing pretty good on the Class 3 stuff, despite my fears. There was one section where I lost sight of everyone and had a mini freak-out, but I survived it (because it's also very tricky to find the right route during these rocky sections). The very last climb is almost all vertical, but what was neat about it, was that, I got over the last bit and I was just all of sudden, there - at the top! It was pretty darn cool. I think what I've discovered, is that, even though it was difficult stuff, the fact that the rock felt solid (like - it wouldn't come out from under me), so mentally I did fine on most of it. It's the real loose, scree stuff that I don't like (at all).

The weather was absolutely perfect, so we stayed at the top awhile taking pictures, chatting, and waiting for the rest of the group to get there before heading back down. I was pretty worried about the down - but I ended up doing well on that too. I think because I stayed real close behind other members of the group - so I could watch where they were putting their feet and what exact route they were taking, which helped tremendously.

Once we were off of the difficult stuff, I started lollygagging and taking tons of pictures of wildflowers and sheep - there were hundreds of sheep just grazing at 12,000+ feet - it was pretty neat (albeit noisy). I was pleasantly surprised at how many wildflowers were still around considering how late in the summer it was! 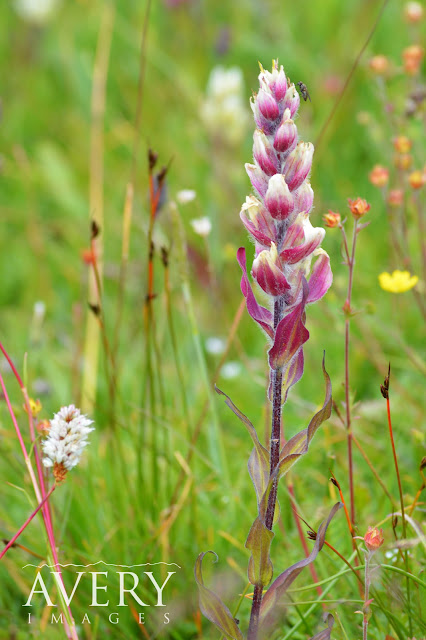 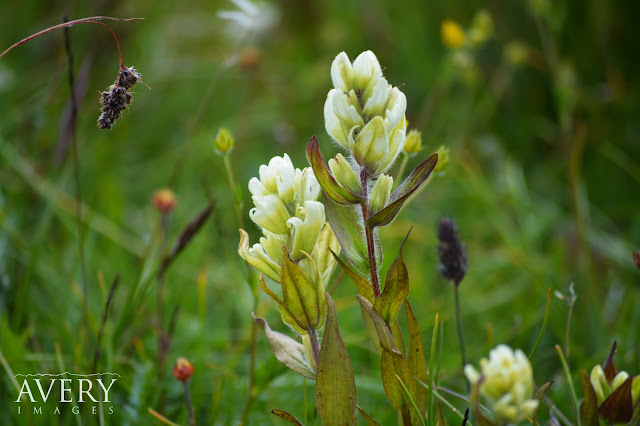 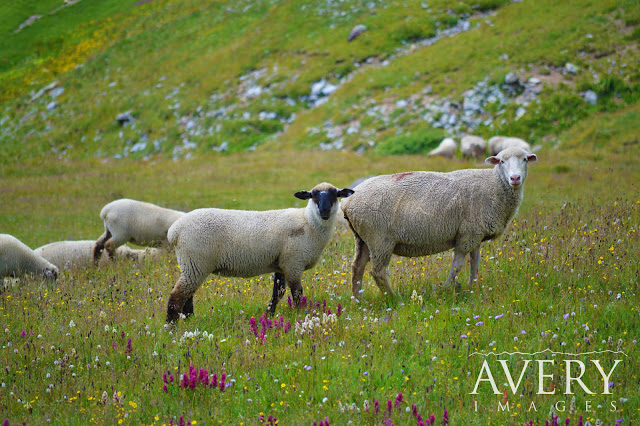 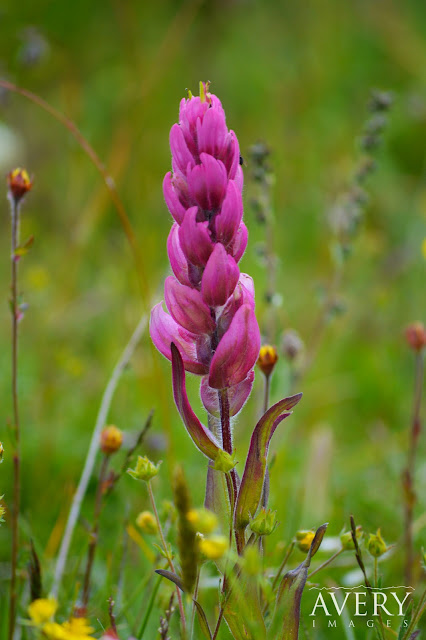 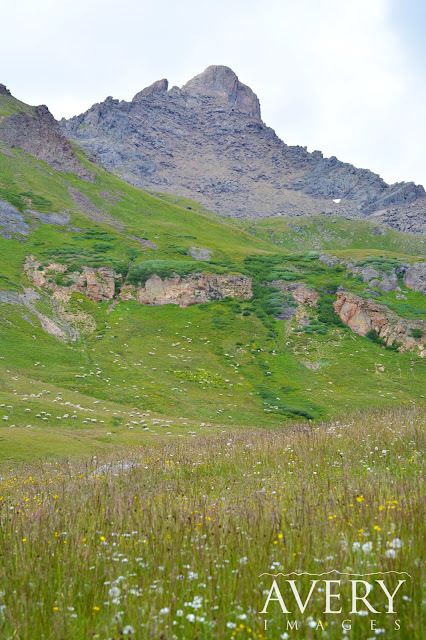 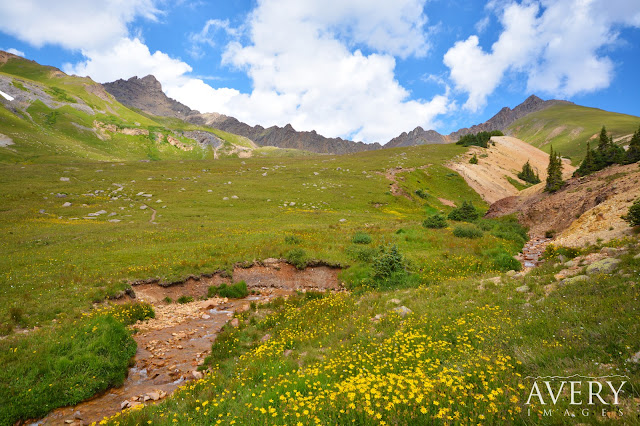 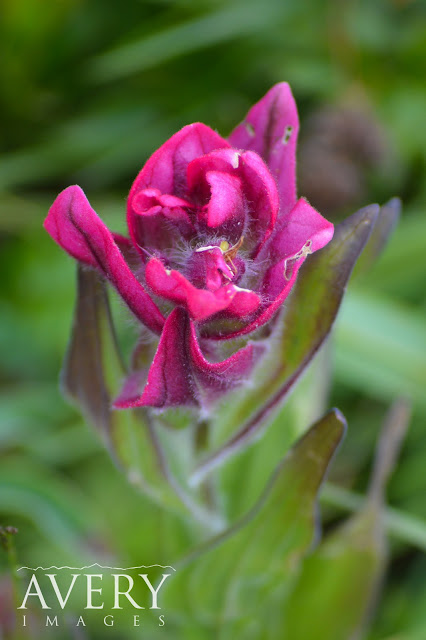 So overall, it was a pretty amazing hike. I was very proud of myself for branching out and trying the Class 3 hike despite being very intimidated by it. I ended up having an awesome time and hope this will get me to step out of my comfort zone more often. I love that feeling of accomplishing something I used to think I couldn't do!


On Sunday I joined some of the same people, some different, for a hike up to the top of Handies Peak. This has been one I've wanted to do for awhile, just haven't gotten a chance yet. It is a Class 1 - fairly easy,"trail-all-the-way-to-the-top" hike. There's two routes you can take, and we chose the American Basin route which is shorter, and, from what I hear, prettier - as it goes through American Basin which is just full of wildflowers (I believe the other route has a lot more trees). And it was incredible - the last section to the top was just insanely steep though with a lot of loose small rocks - not my favorite thing in the world (I'm always afraid the rocks are going to slide out from under me and I'm going to slip - although it is funny that that scares me more than some of the Class 3 stuff - considering I'd be in WAY worse trouble if I fell on that vs. this).

But anyways, I had a great time on this one as well and the views were once again phenomenal. The weather was looking pretty iffy as we got close to the top. So much so, I was hesitant to even keep going - but I was in front of the rest of the group and they were still coming up, so I figured I'd just get to the top, see how it looked, and then head back down if it looked bad. Luckily, once I made it to the summit, the sun came out and everything looked much more clear. There were a lot more people and a lot less room on the top of this one - it's always funny how that works out - I thought Wetterhorn would be a small summit, but it was actually pretty big. This one, on the other hand, I thought the opposite, but it was pretty small.

We sat around for awhile waiting for the rest of the group to arrive and then got a picture of all of us. I started my descent down right after this so I could find a bathroom (and by bathroom I mean some trees or a bush - which is quite hard to find when you're above treeline!). As we headed back down, we got rained on a few times, but never anything too bad. I had wanted to take a lot more wildflower pictures though and of course it was raining when we were heading back through the best area for that! Ohwell - somethings are best left to memory! 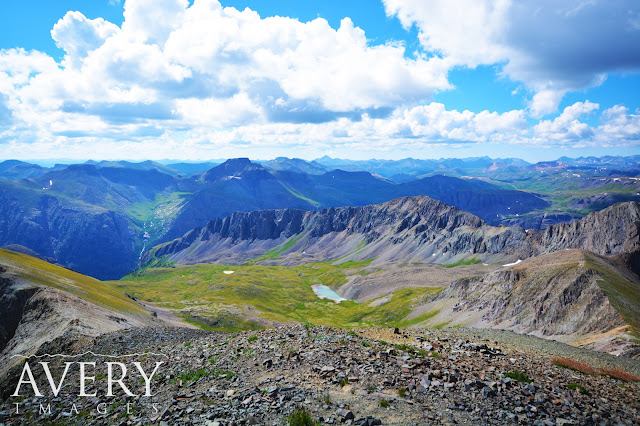 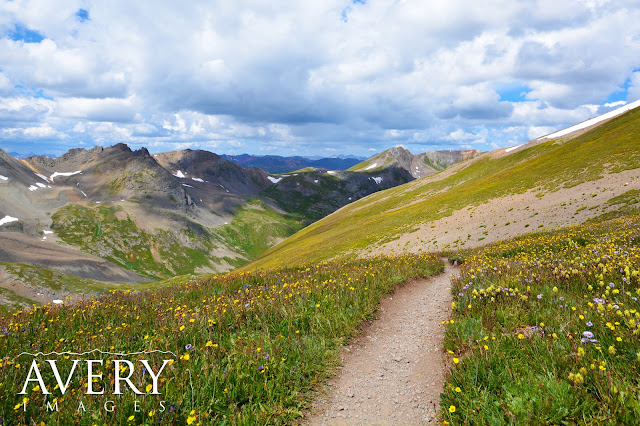 As we were leaving the trailhead we spotted a Moose! This was only the second time I've ever seen a Moose in Colorado, and we all got out of the car to go check him out - pretty darn cool and an awesome way to end the weekend! 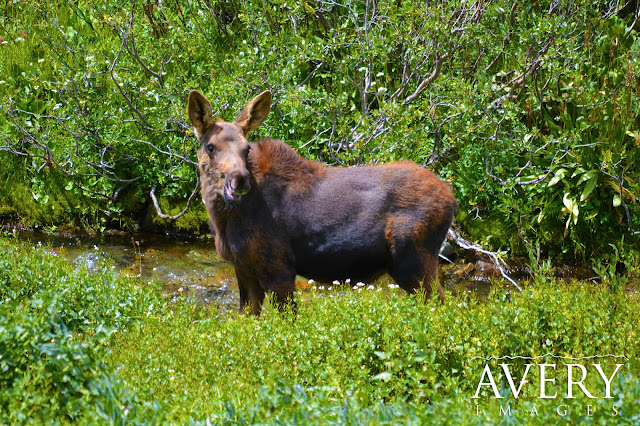 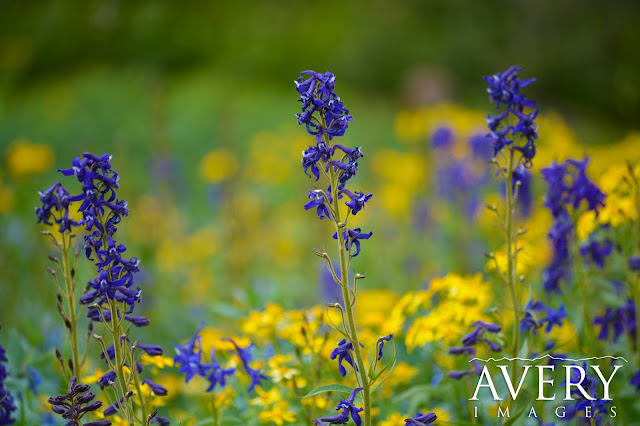