With all of the road running I've been doing, I have barely gotten into the mountains this summer, which, let's face it, is just NOT OKAY with me! I spend all winter and spring looking forward to this time of year and here I've been wasting it. So when my friend Kellee asked if I wanted to meet her in the mountains (we live on opposite sides of the state) to hike a 14er, I of course, jumped at it - especially since I didn't have any solidified plans for the weekend.

Our plan was to camp near Buena Vista and hike Mt. Princeton on Saturday - which would be my 8th fourteener. I also hadn't really ever spent much time in the Buena Vista area, so was excited to experience a new mountain town and see what it had to offer. The town was super cute, and although Buena Vista is a bit of a drive for me (about 3 hours, 40 minutes), it is kind of a cool location - as I can get there by way of 3 different routes, all taking roughly the same time frame. Since I drive I-70 all the time when I go to Denver, I decided to mix it up this weekend and take a few different routes: on the way there I drove Highway 50 south to Montrose, then east to Gunnison, over Monarch Pass and then turned north on 285 into town. On the way home, I went up towards Leadville and took Independence Pass home - a drive I have wanted to do FOREVER, but it always seems to be out of the way (and thus, adds HOURS onto a drive). However, from Buena Vista - it was perfectly "on-the-way" for once, and so I knew I just had to drive it! And I am so glad that I did, because it was, to put it simply, AMAZING! I ended up leaving fairly early on Sunday morning and just took the drive nice and leisurely, stopping to take TONS of pictures - something else I haven't done in awhile - which I've missed! So overall, it was an awesome weekend in the mountains for me! I can only hope to get a few more amazing mountain weekends in before the summer once again slips away from me.

So anyways, I will start with the hike recap, and then I'll get into the drive (which will mostly just be pictures).


I'm going to be honest, this wasn't my favorite hike - a little more technical than I like, BUT it was gorgeous nonetheless and it's always good for me to step out of my comfort zone a little, right? And the views from the top are always worth it in the end. We started at the lower/main trailhead, which is fine, but makes for a VERY long hike - so if you have a good 4WD SUV, use it! We started just before dawn and got some sunrise views, although the tree's were mostly blocking them: 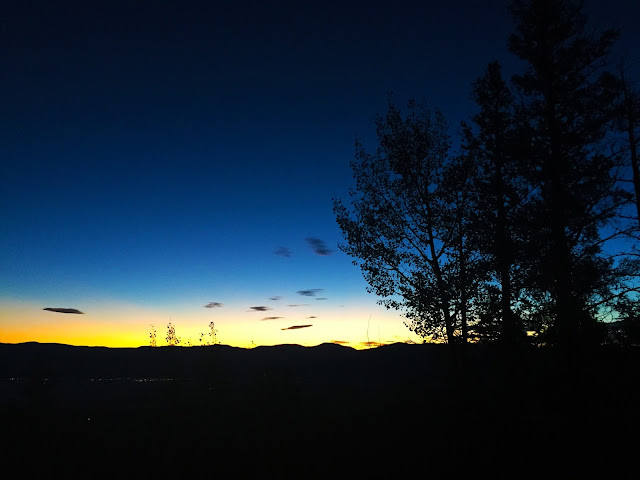 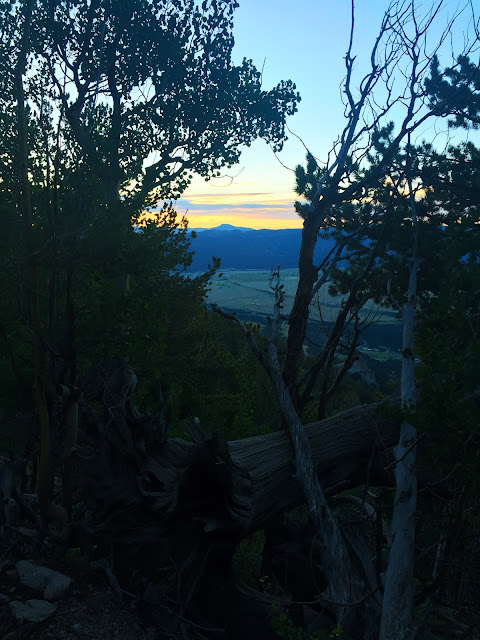 At about the 3 mile mark is a radio tower and where most of the SUV's start to park so we started to see lots of other people starting their hike. We took a quick break shortly after this section to enjoy these views: 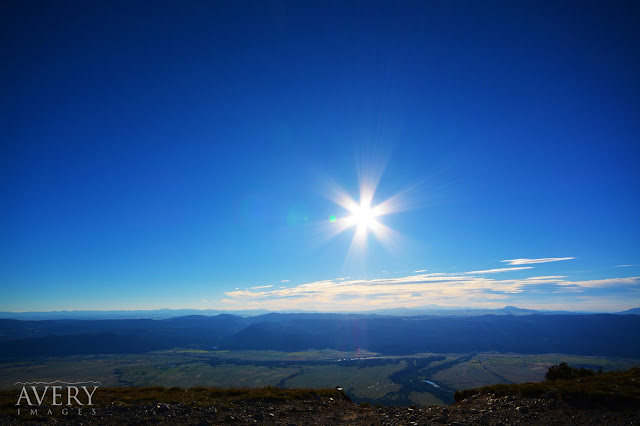 We hiked up the road for another 2-3 miles before finally getting to the actual trail (we also missed the trail the first time around - which probably added an extra 1/2-1 mile or so - still not sure how this happened). But, by missing it, we got to this area with a neat cross: 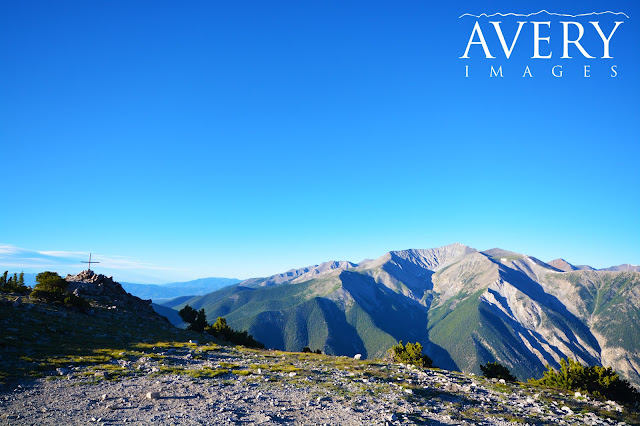 Once we realized we missed the trail, we headed back down a little until we got onto the trail. There's about 1/4 mile of nice trail and then it's all rock. For the entire remainder of the hike. I was not prepared for this. I knew from the pictures that it was going to be rocky - but I guess I just didn't expect the entire remaining 3 miles and 2000'+ feet of gain to be all rock. And most of the rock was giant boulders that required watching every single step you took to make sure you didn't misstep and break an ankle. So when I say 3 miles, you really need to think in terms of time - with this kind of rock, we were moving about 1 mile per hour...! And we're marathon runners here! Haha, but sometimes, it's more about experience I guess - as despite passing a bunch of people on the dirt road, we were the ones getting passed on this section. It was mostly my fault - I'm not good at the rocky stuff. At all.

So, essentially is was just rocks and rock and rocks. Not much to talk about, but it took a really long time. The actual "trail section" (once you got off the 4WD road) consisted of about a mile of going over the boulders without gaining much elevation, followed by a mile or two to the summit that was tons of boulders PLUS tons of elevation. That was the slowest by far. 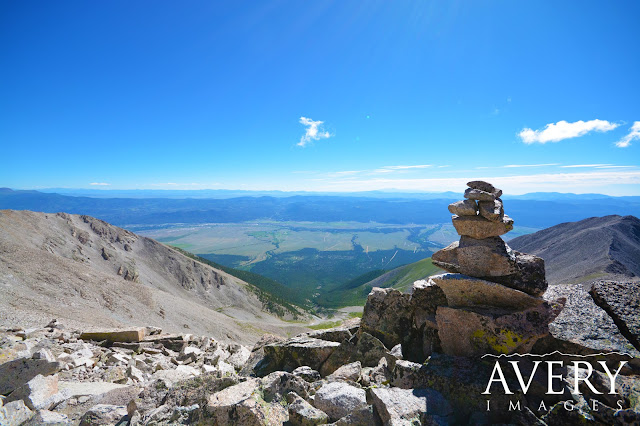 And then FINALLY, after what felt like forever, we made it to the summit:


We stayed at the summit for about 20 minutes or so before heading back. It was absolutely gorgeous weather on top - which is not very common for fourteeners (I mean - Kellee is wearing a TANK TOP for crying out loud!). We would have stayed and enjoyed it for a longer amount of time except we knew it was going to be just as slow going back down as it was going up due to the rocks. So we headed back down, and it did take a very long time!

Also, while we were at the summit, a girl started having REALLY bad altitude sickness. To an extent that I had never seen before - it was pretty scary. The girls boyfriend ended up asking for help from other hikers to get her down the mountain because she was so out of it. About a mile or so down the trail, I caught up to them and Kellee and I gave them our trekking poles so they could try to make a stretcher. I'm not sure whatever happened to them, but I hope she was okay. It was one of those moments that I won't forget - I now know how serious Altitude Sickness can be. So here's a little friendly PSA: don't take Altitude Sickness lightly. If you feel the affects, or see someone you're with affected, don't keep going up and be sure to drink and eat!

After several more hours heading back down, we were almost to the dirt road when we finally saw Search and Rescue on their way up to help the girl.

We kept heading down the road and ended up catching up with a guy who we had leap-frogged with a few times on the trail. He had asked for some water for his dog, and Kellee luckily had enough to give him some (I ran out - of 100oz of water!!! That tells you how hot it was!). In return he offered to give us a ride back down to the main trailhead once we finally reached his car - saving us about 2-3 miles and probably an hour of hiking time (so THANK YOU random stranger with a very cute Wheaten Terrier named Wrigley).

We ended up finishing the hike in about 9 hours. Now - that was our total time and not moving time, but still - 9 HOURS for 13 miles. Thank goodness that the weather was amazing (there were like 2 clouds in the sky all day) - as we were above treeline fairly late in the day, which can be prime time for thunderstorms. We ended up ascending 5547' total feet, topping out at 14,197'!

Needless to say, by the time we got back to camp, we were exhausted! And thank goodness our campsite had showers! After our showers, we headed into Buena Vista for dinner and then spent the rest of the evening relaxing with Kellee's roommate Sarah who had came to camp, but didn't want to hike.

The next morning we got up around 7 and after we packed up camp, I stopped into town for a quick breakfast (Vanilla Chai Latte and a Cinnamon Roll = AMAZING) before heading out for my next big adventure: driving over Independence Pass.


So, as I mentioned before, I've wanted to do this drive for quite sometime now. In addition to not having done it because it's out of the way, I'll admit, I've also been a little timid to do it - especially alone. You see - I had also been told that there were sections of the drive that were only one-lane - which kind of intimidated me. Thankfully I have my nice little tiny Subaru. However, that didn't stop me from worrying about other people and their giant trucks and RV's. Luckily - it was not as bad as I was afraid of. For one thing, the Leadville side is totally fine with 2 lanes all the way to the top. The Aspen side is where it gets a little tricky - but it was just 2 fairly short sections and I, thankfully, didn't come across anyone on my way down. So crisis averted - I survived to tell the tale, and even want to do it again sometime!

I ended up making several stops throughout the drive, including a pretty long stop (probably 45 minutes to an hour) at the top of the Pass to take lots of pictures and enjoy the scenery and being above treeline. I've said it before and I'll say it again - I just LOVE being above treeline where it's all green and beautiful. There wasn't much of that while hiking Princeton, so I was SO glad there was here - and even better - there were tons of gorgeous little alpine wildflowers. It was absolutely incredible. It is places like this that always lead me to wonder how people don't believe in God. It's like he's giving us glimpses into Heaven! 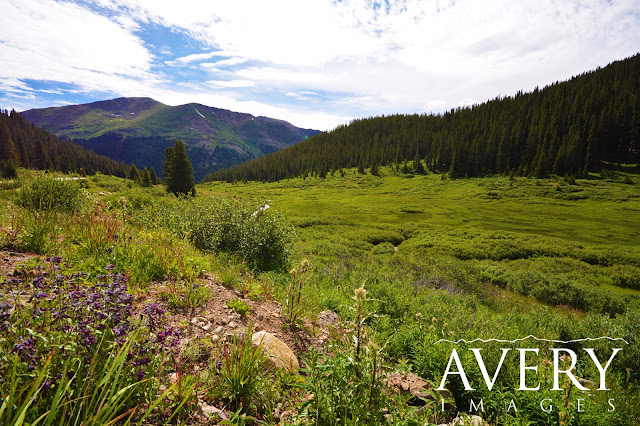 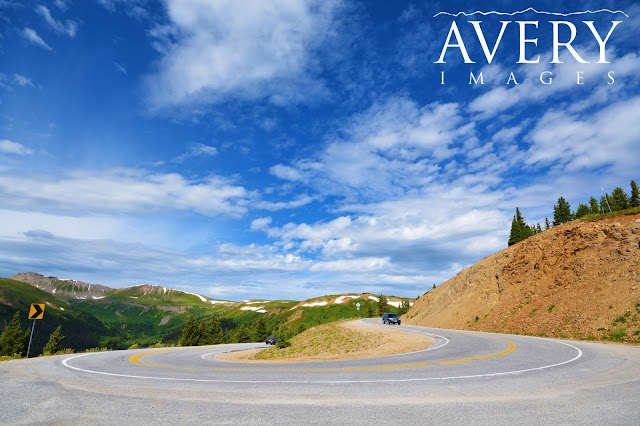 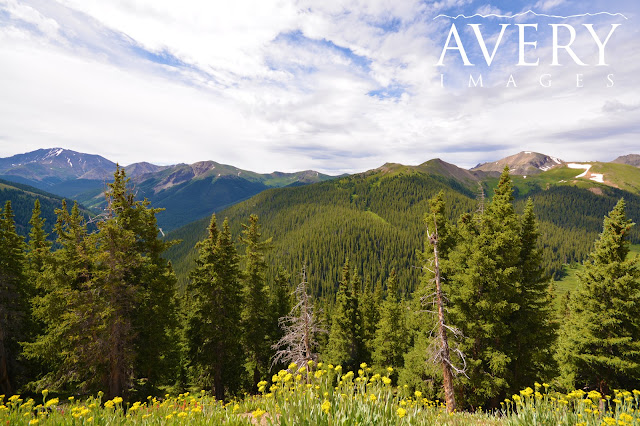 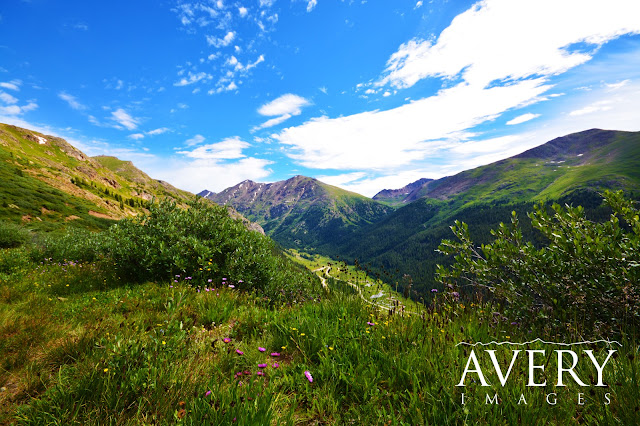 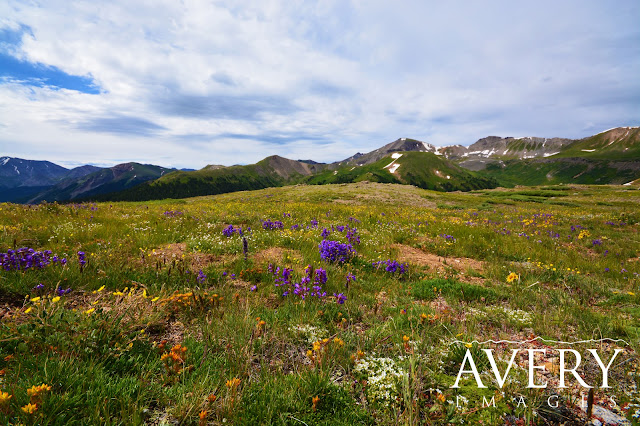 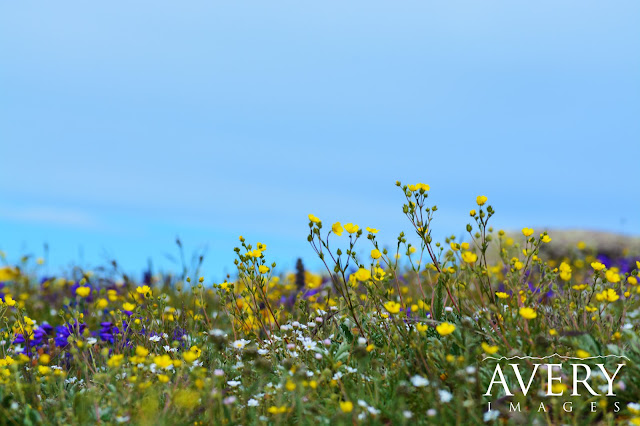 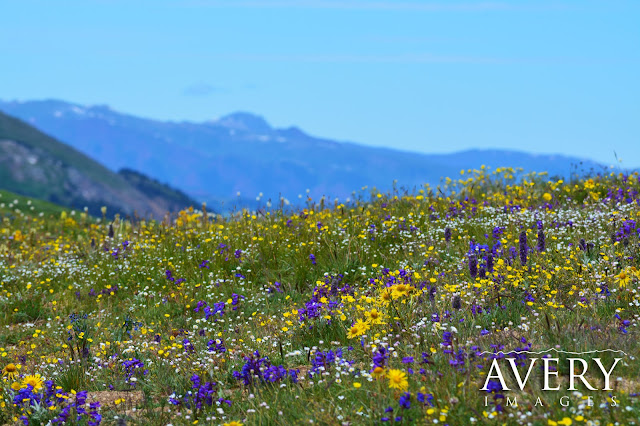 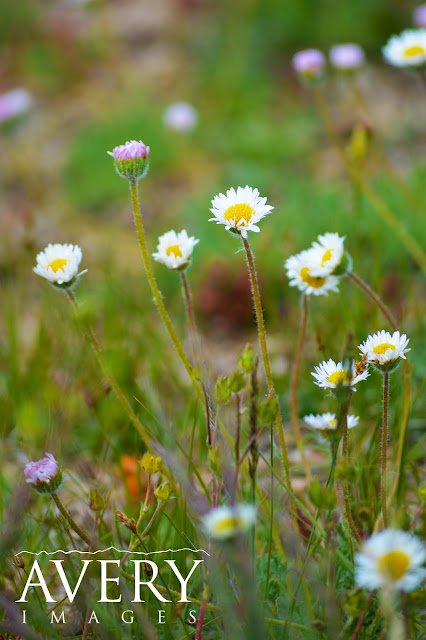 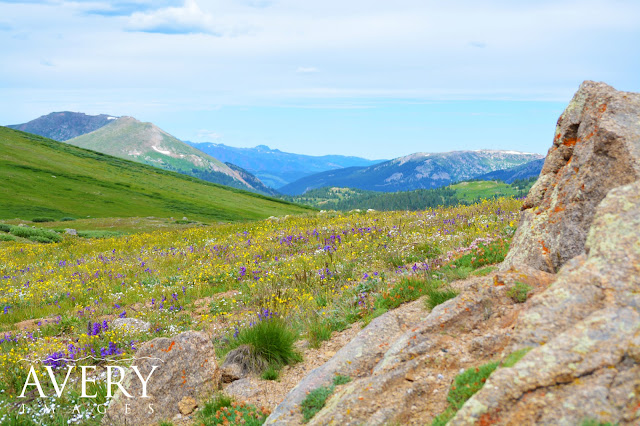 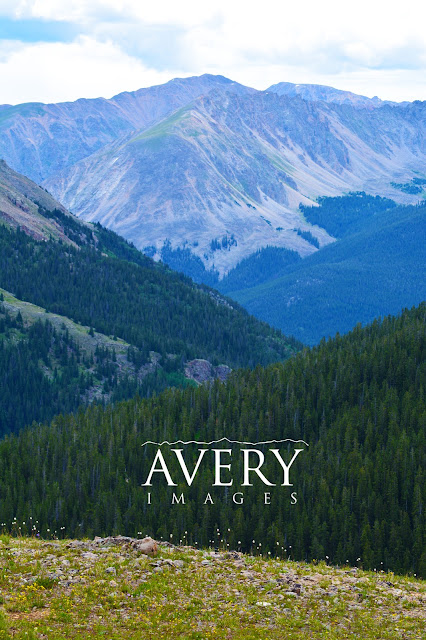 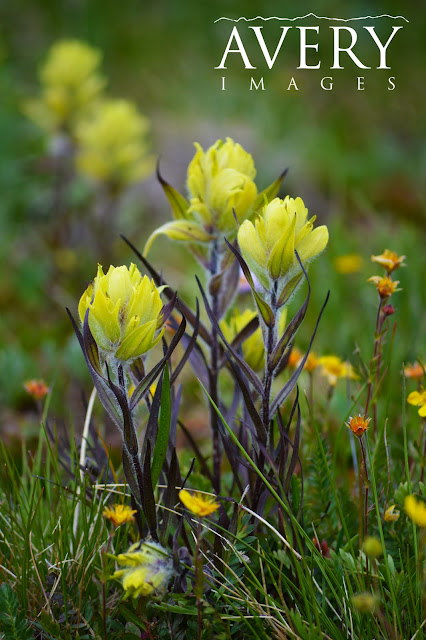 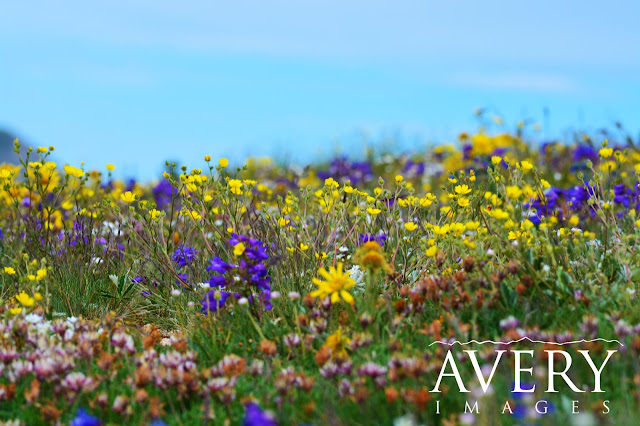 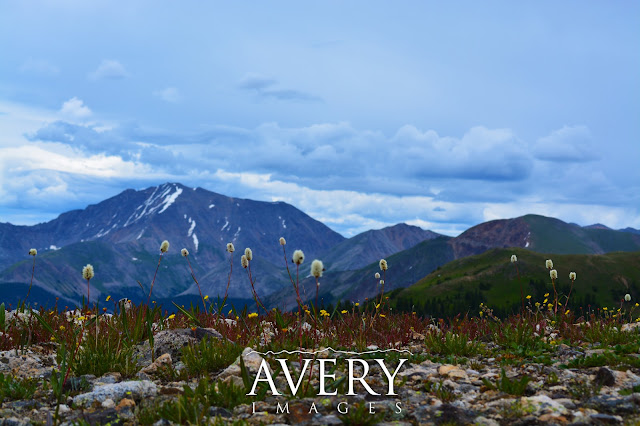 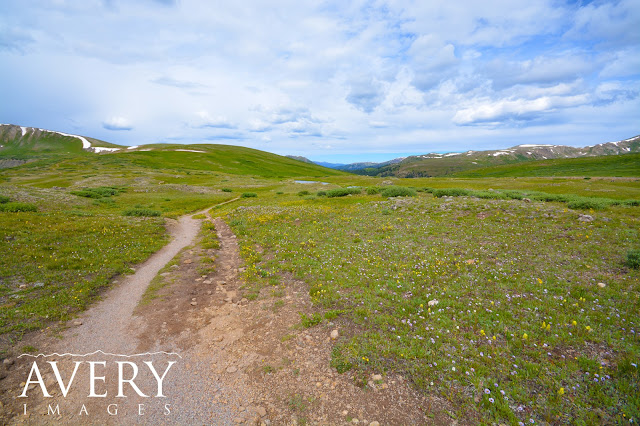