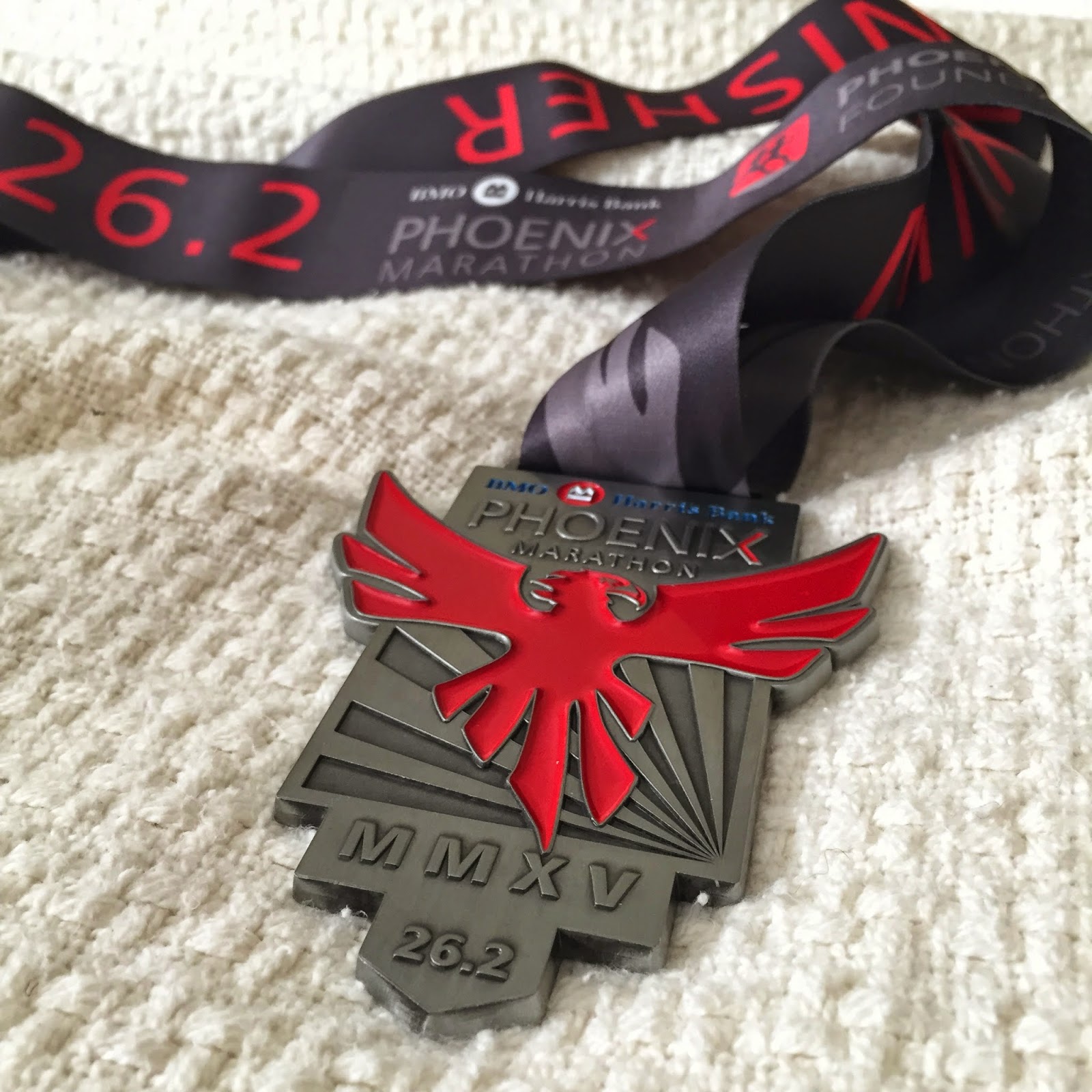 I signed up for the Phoenix Marathon back in July after I had officially decided I wanted to go for a Boston Qualifying Time (AKA "BQ") this year. I had just ran Aspen Valley Marathon in 4:03:10 - a HUGE PR at the time, despite not training much for it (now don't get me wrong - I had been running long distances - but I just hadn't been doing any specific road training with speed work), so I figured the gentle downhill course had a lot to do with it. So I decided that was what I would look for in the race courses I chose for #Operation BQ.

I still had a lot of races on my schedule for the remainder of 2014 and I knew I needed a full 18 weeks to really train and do consistent, dedicated Speedwork before I came anywhere near attempting to run a Boston Qualifying marathon - so I picked Phoenix. The late February race date was perfect, it was semi-close - so traveling was easier, and the course was downhill with a net elevation loss of about 1000 feet.

A few months later my friend Kellee decided to do it too - which made it more exciting! (There's something kind of anti-climatic about traveling to races by your lonesome self). Her parents also live in the Phoenix area so we had a place to stay (added bonus!).

I started the Hansons Marathon Method training plan around the beginning of November and immediately started seeing significant improvement in my speed. I obtained HUGE PR's in the 5K (22:41), 10K (46:29), and Half-Marathon (1:44:17) distances so I knew I was on track to a BQ. However, I also knew running a full TWENTY SIX point two miles was a LONG distance and I had my work cut out for me. So I signed up for 2 additional back-up marathons (Colorado Marathon on May 3rd and Revel Rockies Marathon on July 19th) to ease the stress - I knew it was going to take time to get to a sub-3:35 marathon. I figured if all conditions were absolutely perfect (weather, course, fueling) I could MAYBE do a 3:35 at Phoenix - but even if that did happen I knew I wouldn't have enough cushion to actually get into Boston (because so many people apply to get into Boston, you actually need to run a few minutes faster than the standard qualifying time). So I decided to go into this race with my main goal being to run sub-3:45 and to just see how I did. I figured no matter what, I had put in the work and unless something went terribly wrong, I should PR for sure - seeing as this was the most intense training I had ever done.

Before I knew it, race week was here. I flew in on Thursday night, then on Friday, Kellee and I went to the race expo for packet pick-up, where I also had the opportunity to meet a few friends from MyFitnessPal in real life - Amanda and Shirley. It was really fun to meet them and we chatted it up just like we had known each other forever - I just love the running community in that sense (after all I also met Kellee on Instagram - and now here we were traveling to a race together!).


After filling our race packets with tons of swag, we headed back to Kellee's parents house and rested up for the next day. I attempted to get sleep (without a ton of luck) before getting up at the lovely hour of 2:30am. We were out the door around 3:30 and I got dropped off at my bus pick-up around 4:30 - I had now been up for 2 hours and still had 2 hours before the race start (you had to be on the bus no later than 5:00 AM!).

Despite the bus ride being fairly long, I still had about an hour and a half until the race start by the time I got to the starting line. So I circled through the bathroom line once where I saw Andrea Barber (the actress who played Kimmy Gibbler on Full House) and embarrassingly asked for a picture with her (I knew she was running it, so when I saw her I had to get a picture - after all I always regretted not getting a picture with Anton Krupicka at Red Hot last year).

After that debacle, I found Amanda and we chatted for the remaining hour we still had left. She was planning to run a similar pace than me so we talked strategy a bit. My problem was that I wanted to go out conservatively and save energy for the second half - but at the same time I knew that the downhill grade was much more significant in the first half - and I wanted to take advantage of that. In the end I settled on just going off of feel - I would let myself run a little faster than my planned pace at the beginning, but only if it felt easy.

After what felt like an eternity, it was finally time to line up at the starting line. This was a smaller race (just under 2000 finishers) so there weren't any starting corrals - just the pace teams with their signs so you could line up somewhat near the finish time you were going after. We squeezed in between the 3:40 and 3:45, wished each other luck and then got ready to go!


Before I knew it, we were off! As I had decided earlier I just settled in at a comfortable pace and was happy to look at my watch and see I was running about an 8:10 pace. I kept right around this pace for the first 4 miles. The sun was coming up, but because it was so overcast out it wasn't much of a sunrise (bummer!). I also chatted with a couple of Colorado runners about Imogene Pass Run (there was a guy wearing last years race shirt) for a bit.

Miles 4.5-6 brought the only significant uphill of the course. It wasn't too bad in that it wasn't very steep, however it was pretty consistent for the entire duration. I slowed a bit - mostly just making sure I maintained the same effort, and ran a few miles in the 8:30 range. Right after the uphill ended came some pretty significant downhill - so I decided to use it to my advantage and really picked up my pace, working to make up for my two slower miles. I passed Amanda somewhere in here (she had been ahead of me for the first 6 miles) and even passed the 3:35 pacer. Part of me worried I was going too fast, but I felt so good. I wasn't breathing hard at all - so I just kept at it - running a 7:30 and then some low-8:00's. 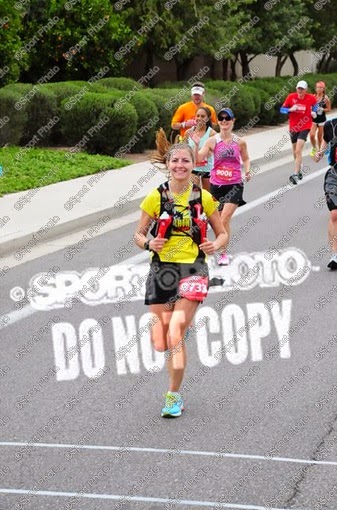 Then all of a sudden we were in sight of the half-way point. With the wind showing me down, I had been leap frogging a bit with the 3:35 pace group, but did cross the half marathon timing mat right on track for a 3:35 finish. I was still feeling pretty good at this point but I also knew the second half was going to be harder than the first half - not only was the downhill significantly less noticeable, but the wind really felt like it was picking up.

Somewhere around mile 17 was where I started to feel myself fading. I was running 8:30 miles with the same effort that I had been running 8:10's earlier with. I made sure to keep fueling and continued on. Shortly after, Amanda caught up to me. We ran a couple of miles together and then she was long gone ahead of me. Miles 22-25 were the toughest - my quads were really aching at this point but I knew I had to just keep going.

Finally, I hit mile 25 - only one more mile to go! The crowds got bigger and bigger as I got closer to the finish line - which motivated me to pick up my pace. I also had several spectators notice my Marathon Maniacs shirt and ask me what marathon I was on (Marathon #8, or 11 if you count ultra's). Then FINALLY I turned a corner and there it was - the finish line! I sprinted as much as I could (even passed one guy!) and finished in 3:41:35 - a 21 minute PR!

The rest of the weekend we relaxed, checked out Glendale on Saturday night and went on a short hike on Sunday morning in the Estrella mountains: 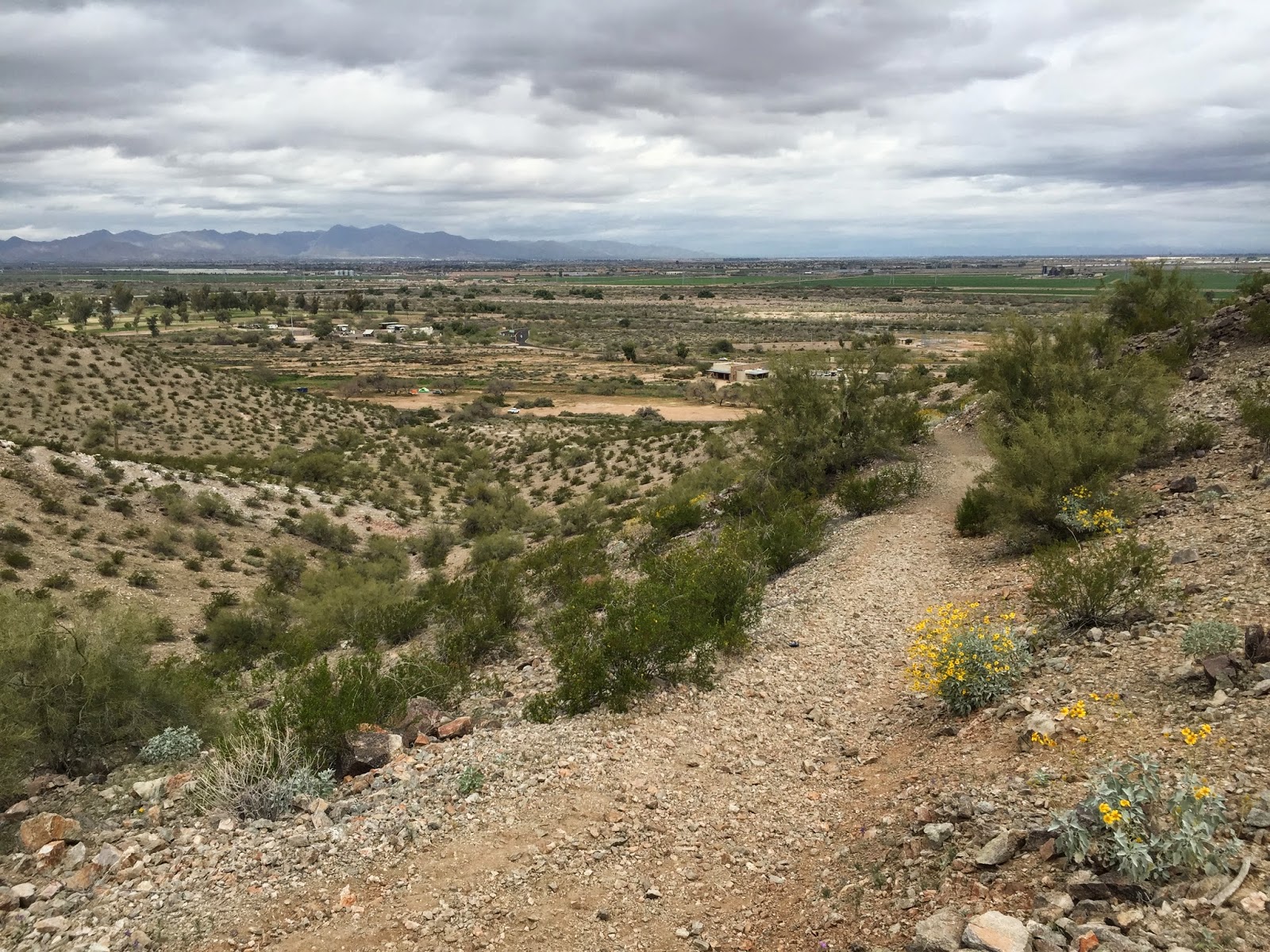 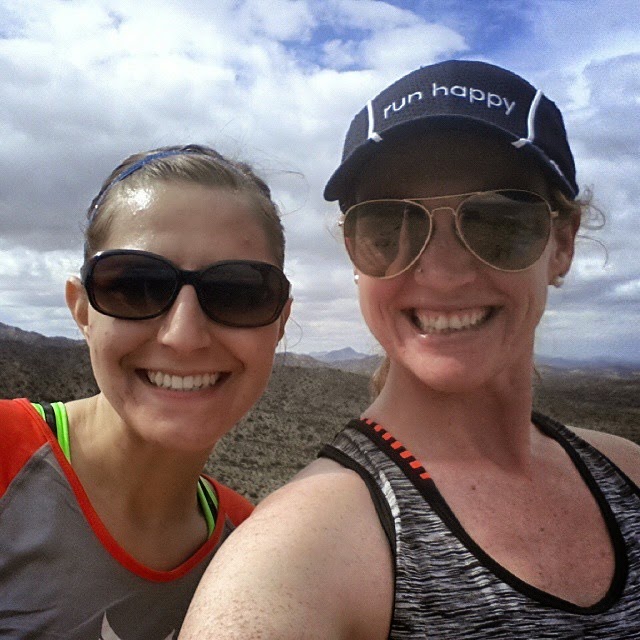 Overall, this was a good race. I've been training my butt off and I was SO happy for it to pay off! A lot of people expected me to go into this trying to BQ - but honestly my goal wasn't to BQ (YET) - I've got several more races for that!! - but rather to run a good race, have fun, and do the best I could. And that's exactly what I did. Had the wind not been so intense, I think I could've maybe ran sub-3:40 - but I don't think I was quite ready for a 3:35. I hope with more experience and training I will get there!

What Didn't Work / Dislikes:
So would I do this again?

Probably - dependent upon travel costs. If I lived in Phoenix, definitely. Since I don't - maybe, maybe not.