This past year has been a bit of a whirlwind. If you haven't noticed, I've been racing like CRAZY. Since my marathon debut (that sounds fancy doesn't it? Haha) in January, I've ran 6 Marathons and 3 Ultra Marathons among many other shorter races. In fact, I've actually ran a total of 19 Races this year! Yikes that's a lot.

While I've had a blast, and fallen even more in love with long distance running, I have decided it's time to cool-off a little. The Denver Rock-n-Roll Marathon coming up on October 19th will be my last "big" race until next February's Phoenix Marathon. It's kind of an oxy moron I guess, that because I've been "racing" so much, my speed and training have suffered. When you race all of the time you're actually constantly taking time off from running - a few days before the race and several days after. I need to settle down from the racing and focus on getting into a routine of consistent training. As I unveiled briefly in my Aspen Valley Marathon post, my 2015 goal is to Boston Qualify. That is, run a marathon in under 3 Hours, 35 Minutes. My current fastest marathon is 4 Hours, 3 Minutes, 10 Seconds. Yep, I've got my work cut out for me.

But as someone who went through a pretty big transformation from couch to ultra runner in a relatively short time frame, I firmly believe anything is possible and that I can qualify for the Boston Marathon. Will it be at the Phoenix Marathon on February 28th? Honestly, probably not. BUT it's a start. I've got a nice line-up for the first half of the year in which I hope to continue to get faster and hopefully by the second or third marathon I can do it.

All three of these marathons have a net downhill course which should make it easier - although still not "easy" by any means. And If I don't get it by Revel Rockies, then I've got a few more fall options that I may sign up for as things progress.

So there you have it, my big, crazy dreams. It's scary putting it out there, but as Shalane Flanagan was recently quoted saying:


"I don't see any downside in sharing what we are striving for. I don't want to sugarcoat it - I'm honest with myself and with other people about my goals. I don't feel entitled about them or what it's going to take to get there - some of them are pretty lofty ones! It's almost like writing your goals on your wall, like when you were a little kid. It's the same kind of thing, and if someone asked me what I want to do, I don't try to hide what I want to achieve. I guess I'm not afraid of failure."


I was in Broomfield the weekend of September 20th-21st for my friends wedding, so decided to go ahead and run the Broomfield Days 5K again this year. I ran it last year and finished second in my age group just a little behind my good friend Amy - in 25:47. My goal for this year was to run it at an 8:00 minute per mile pace. And incredibly I achieved just that: finishing in 24:48 gave me an exact average pace of 8:00. My splits during the actual race weren't that consistent - I actually ran the first 2 miles much faster than the last - but I still did it (and the race ends on an uphill which is always tough).

I was in my friends wedding, and so had other commitments and couldn't stick around for the final results, so I had a friend pick up my "major award" for me for winning my age group (please note reference to "A Christmas Story"). It was the same as last years, only I got a "gold" medal instead of "silver". The results were posted in a spreadsheet organized only by age group, so unless I take the time to actually re-organize them all by time, I have no idea what my overall place or gender place was - so I'm a little disappointed in that. 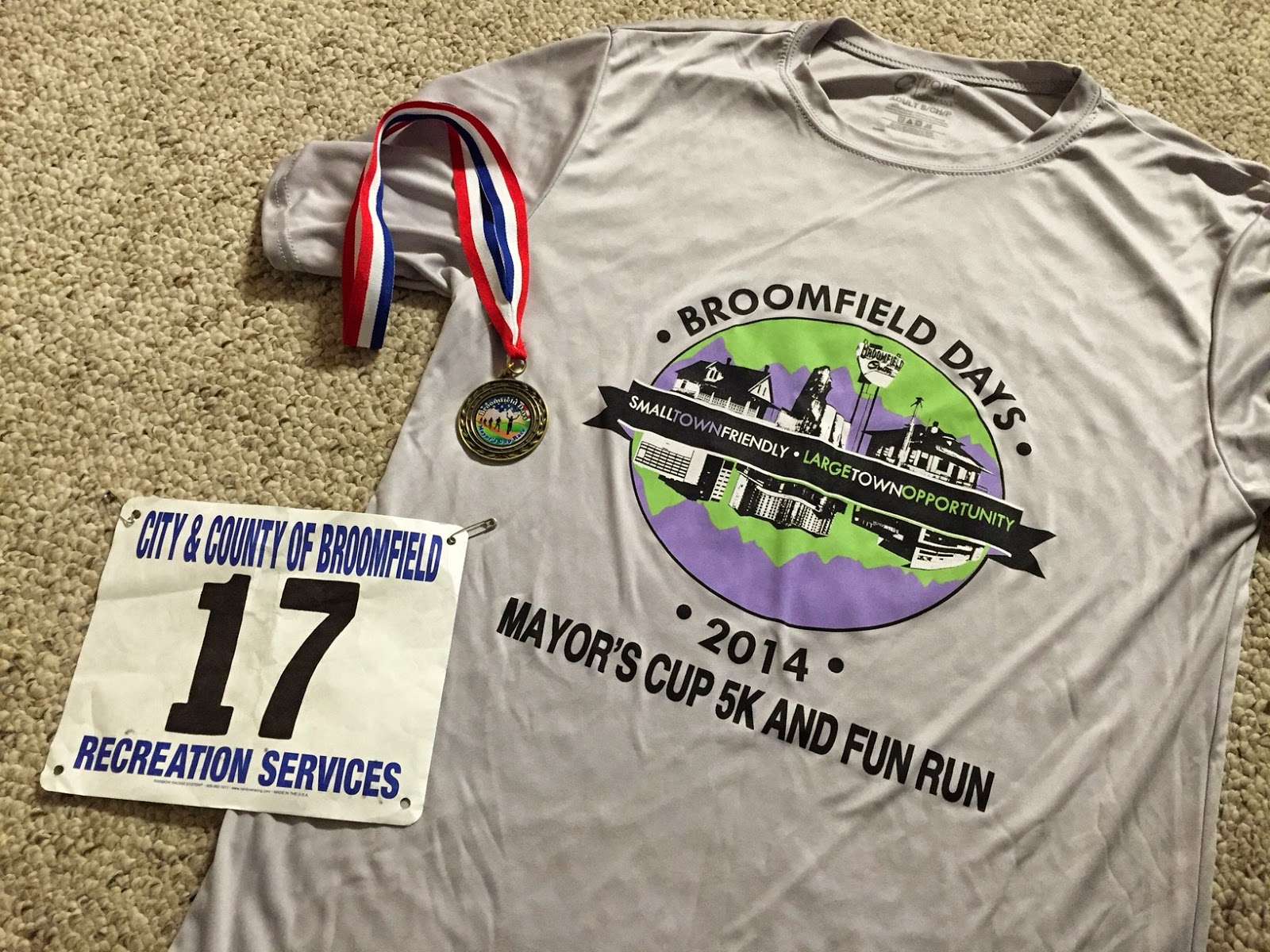 
On October 5th I ran the Black Canyon North Rim 20K. Despite doing the "Black Canyon North Rim Race" for 3 years in a row, this was actually my first time on this course. I ran it in 2012 but just did the 8K option (in fact this was only my second race ever), and then I ran the 20K last year, but the course had to be moved because of the government shut down (although I have to say, in terms of run-ability - I liked last years course better - but it didn't have quite the same views, that's for sure!).

Honestly, I love the Black Canyon Races and plan to keep running them every year. They attract a smaller crowd which is just so much more laid back and easy, the views are awesome, they're well organized, and you really can't beat the views! Luckily, I also found some people from Grand Junction that were going so I was able to carpool and catch up with a few local runners I had only met a few times before.

I went into this race wanting to "race" it, but not really sure what that meant. I knew the course was "rolling hills", but I definitely underestimated them, as well as underestimated what I was capable of only 1 week post-50 miler. My goal was a 9:00 minute/mile pace or below - but I didn't quite hit that (although all things considered it wasn't too bad).

The course is in the shape of a "T" - where you start at the bottom of the "T" - run to the intersection, head left - which is the majority of the uphill, then turn-around and head back to the other end of the "T" (although this has some nice uphill as well). The first couple miles before you get to the intersection are a nice gentle downhill - I did a pretty good job pacing myself on this - running low-9:00's. And then we turned. And the uphill started. And continued. I'll be honest, it was pretty painful. Although I don't "race" a lot, when I do, it's usually courses without a lot of hills - so this was tough. But, I had already committed to myself that I was going to push myself on this - so I kept at it. All things considered I think I did a good job at it.

Finally the turnaround was at mile 7.5. After that, it's rolling "downhill" until you pass the intersection again and the up starts until just before the finish. The finish is a little weird - you actually pass the finish line and make a loop at the Campground and come back down. The only good part about this is that you end on an downhill. My pace suffered pretty consistently in the last mile - but I guess it goes to show how much I pushed myself on the uphills - I really felt like I had barely anything left by this point. But I kept at it, as best as I could and finished in 1:57:23.

PHOTOS (Note - I didn't stop to take any photo's while running this one, so the photos of the Canyon were taken from Jeni and Randee who I drove down with - so thank you to them!!). 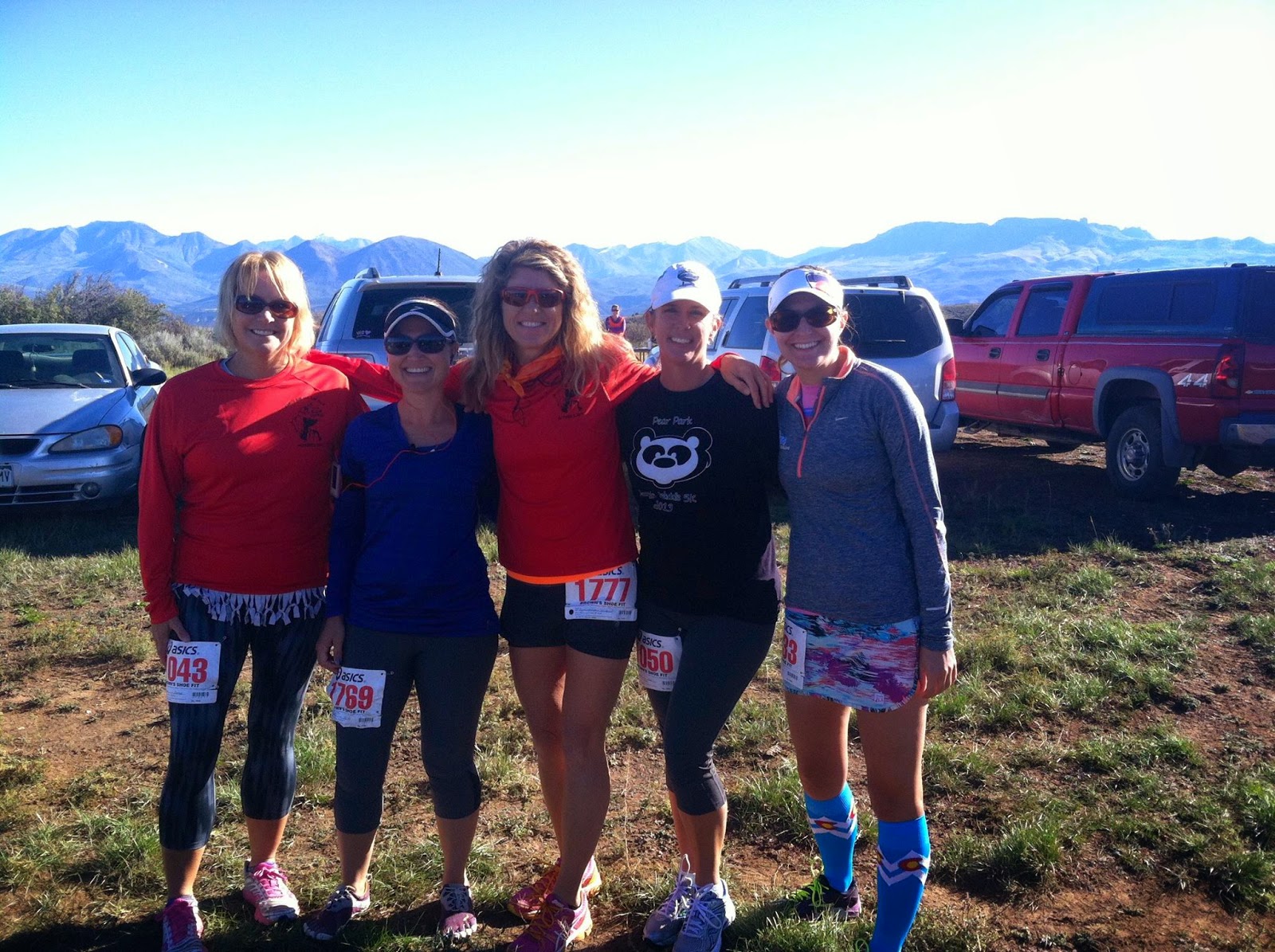 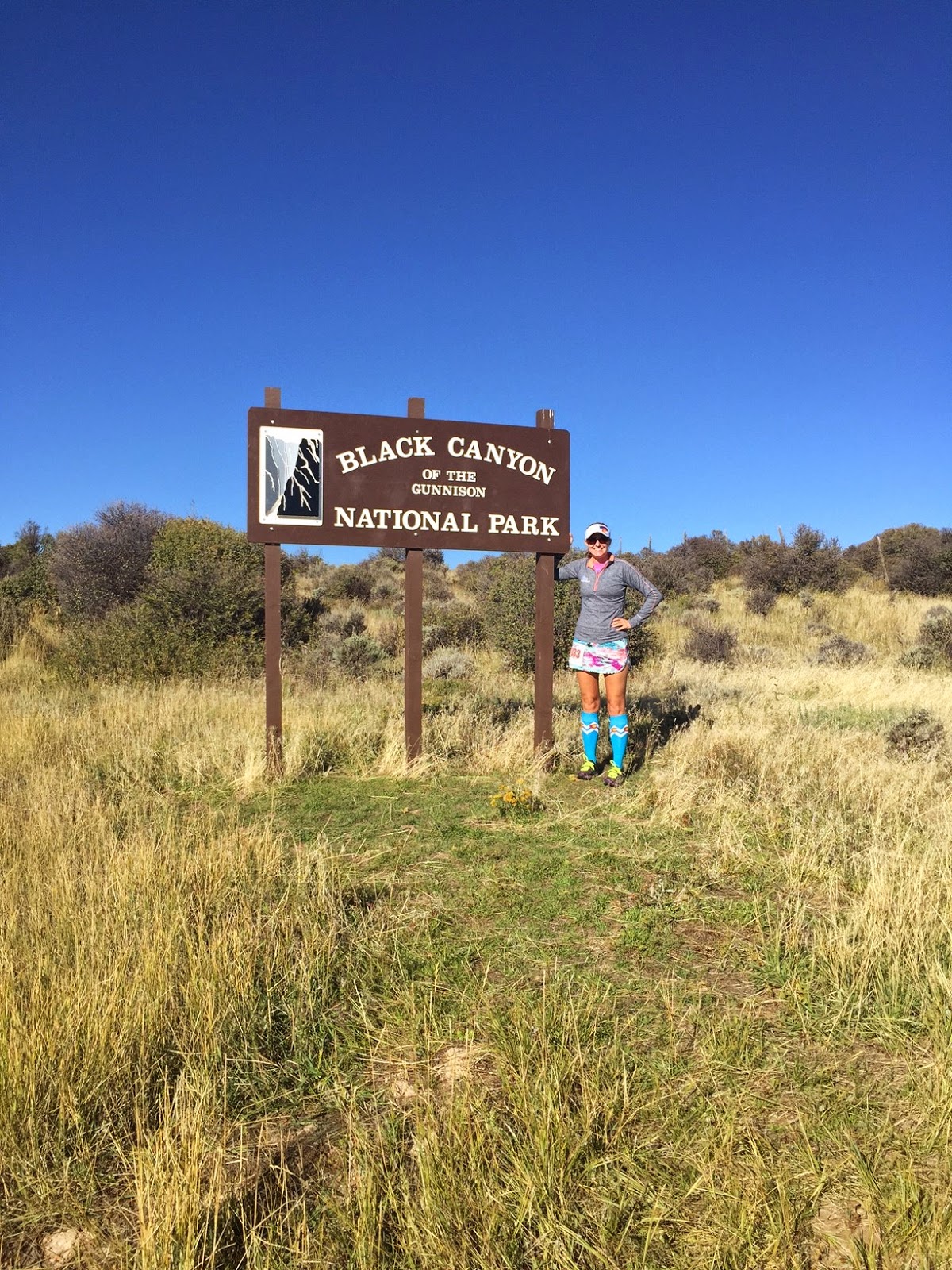 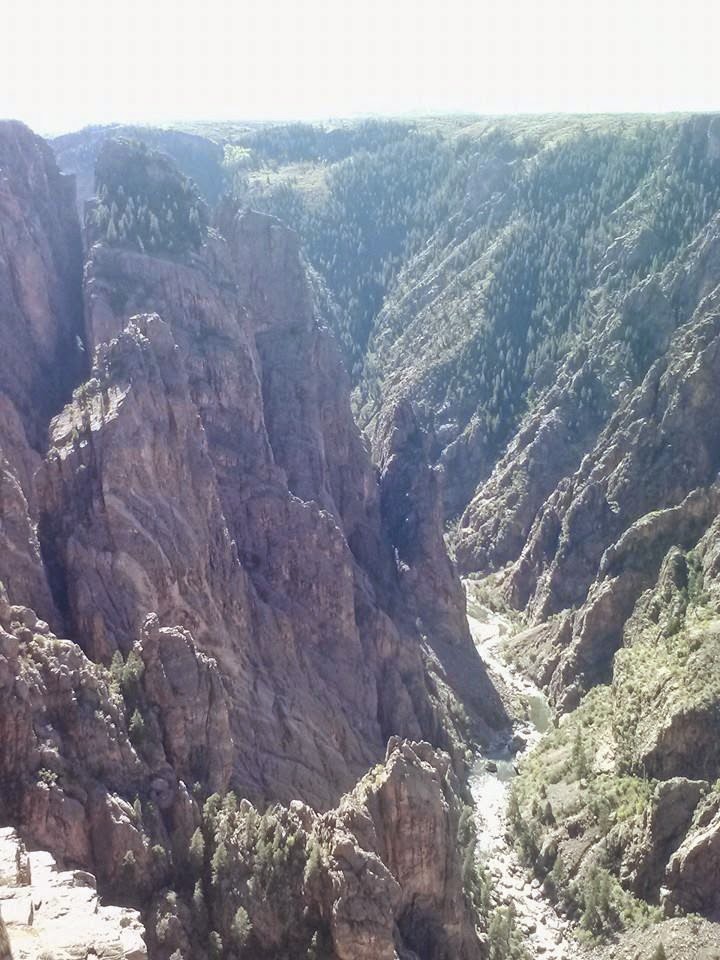 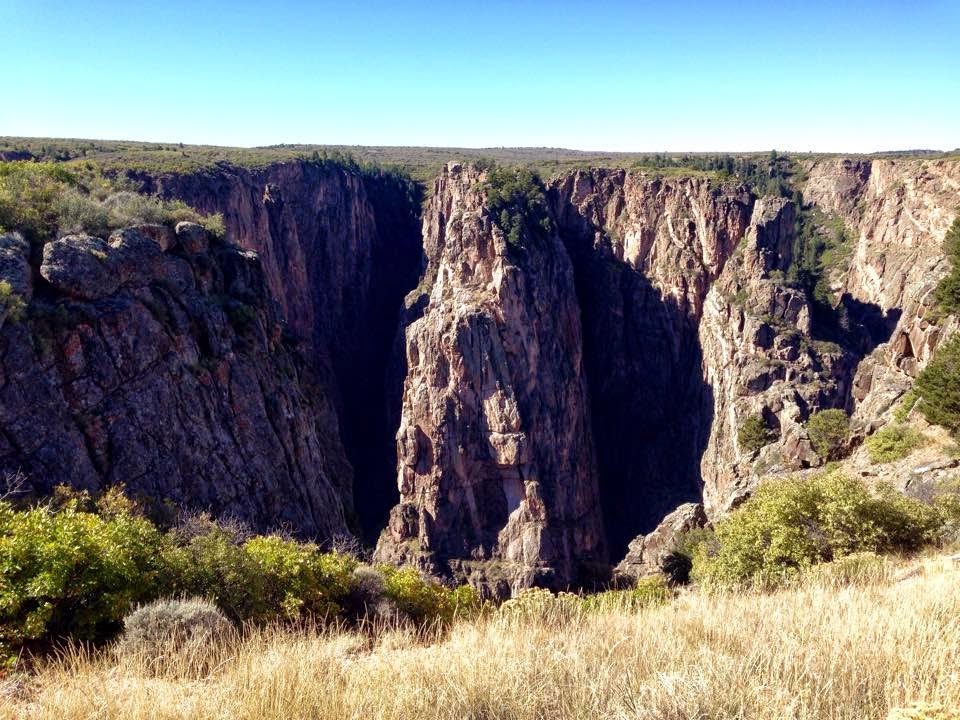 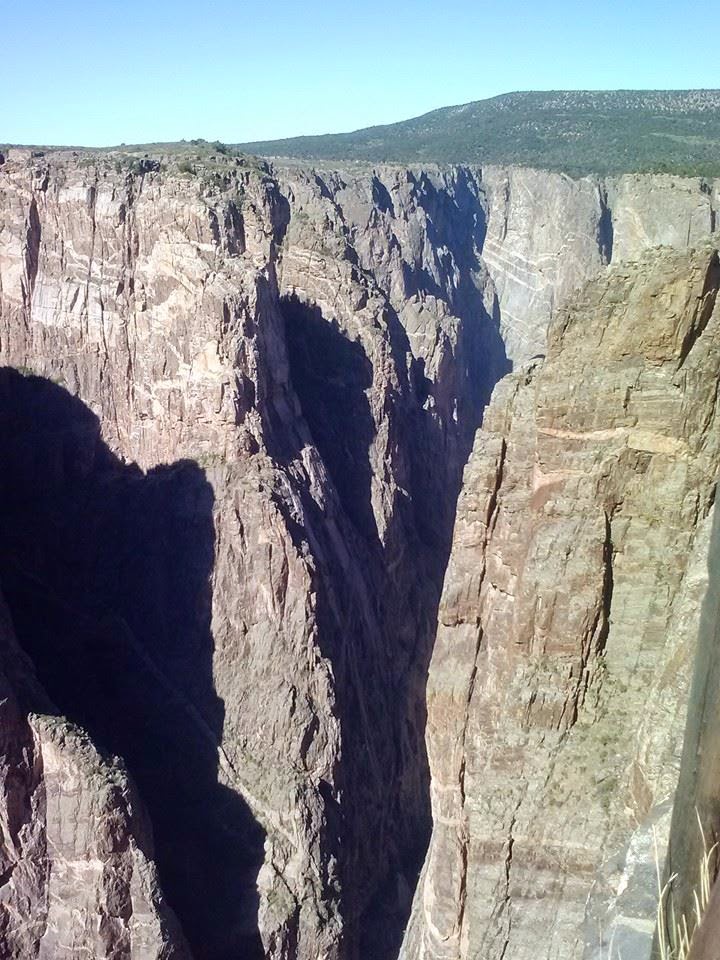