Warning: What you are about to experience within this post is a significant amount of photos just of me...I know, it's scary... (In all honesty, I do feel a little weird posting 50+ pictures just of me, but it was the best way to show the course, as I didn't take any photos myself on race day). My apologies.

I did it! 26.2 magical miles in Walt Disney World! 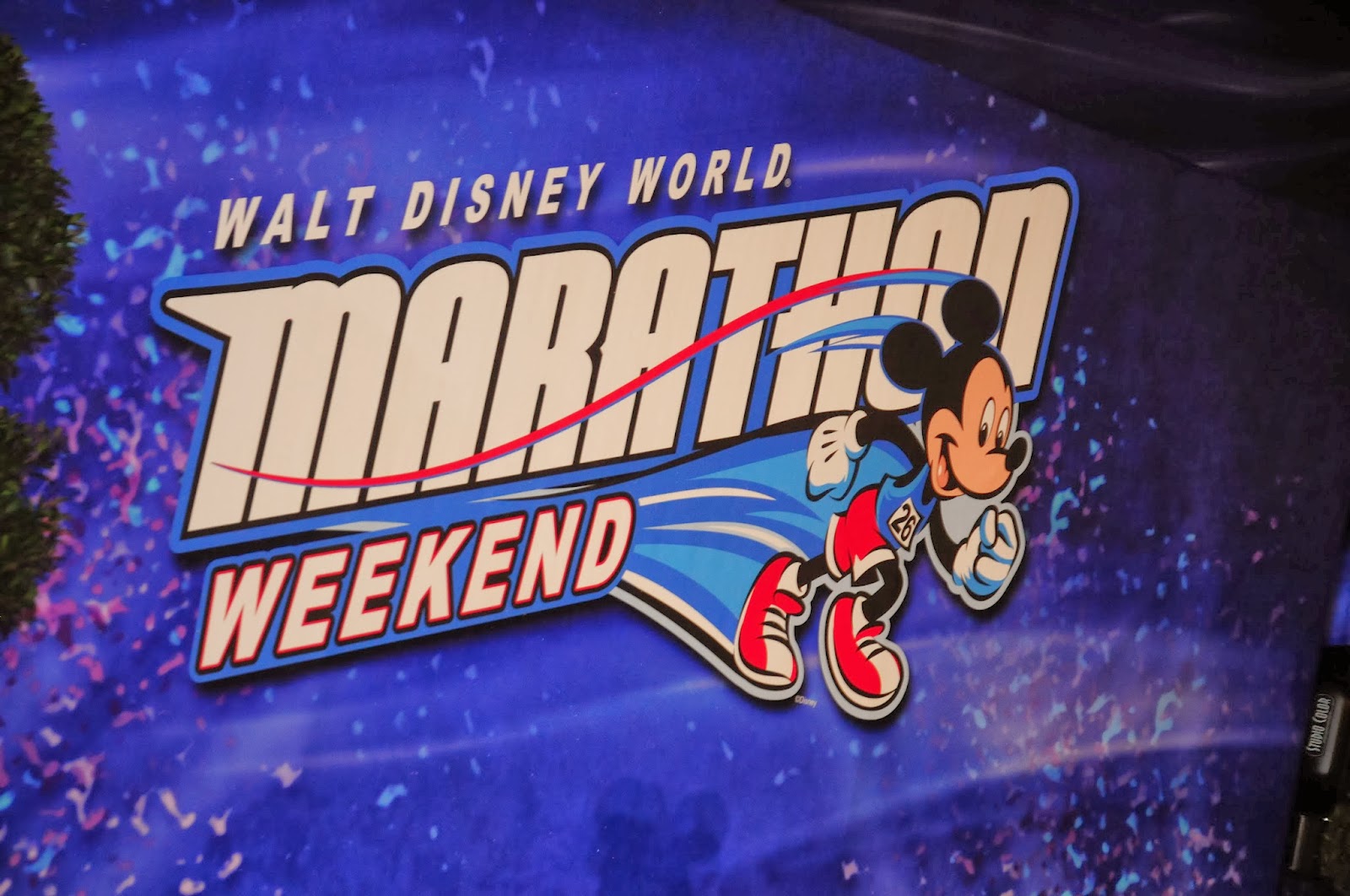 But I'm getting ahead of myself.

A real quick recap on my last couple of weeks of training (I was going to do a separate post, but I probably won't ever get around to doing it, and I want to post about the race!):

I did manage to get my two, 20 mile training runs in. Both were COLD and snowy. But I did them (had to wear a million layers and spikes on my shoes for both - but it just made running in shorts and t-shirt that much better on race day). During the last 2 weeks of tapering, I also ran a 12 miler at Marshall Mesa in Boulder while visiting my family. I love the Marshall Mesa area - it's hilly enough to feel like a trail run, but flat enough to actually run the whole time, and you've got gorgeous views of the Flatirons! Lots of fun!

The very last week before race day I developed a cold, which I was really bummed about. It wasn't horrible, but I had a lot of congestion and a sore throat. Luckily, once we got to Florida I seemed to feel better. I think the warm weather and humidity helped.


I did also manage to reach my fundraising goal for the Alzheimer's Association ALZ Stars. My goal was $1,026.20, and I raised $1,140.00! So very happy about that and I really enjoyed running this marathon in honor of my grandma! It felt good to make a difference while also achieving a personal goal! 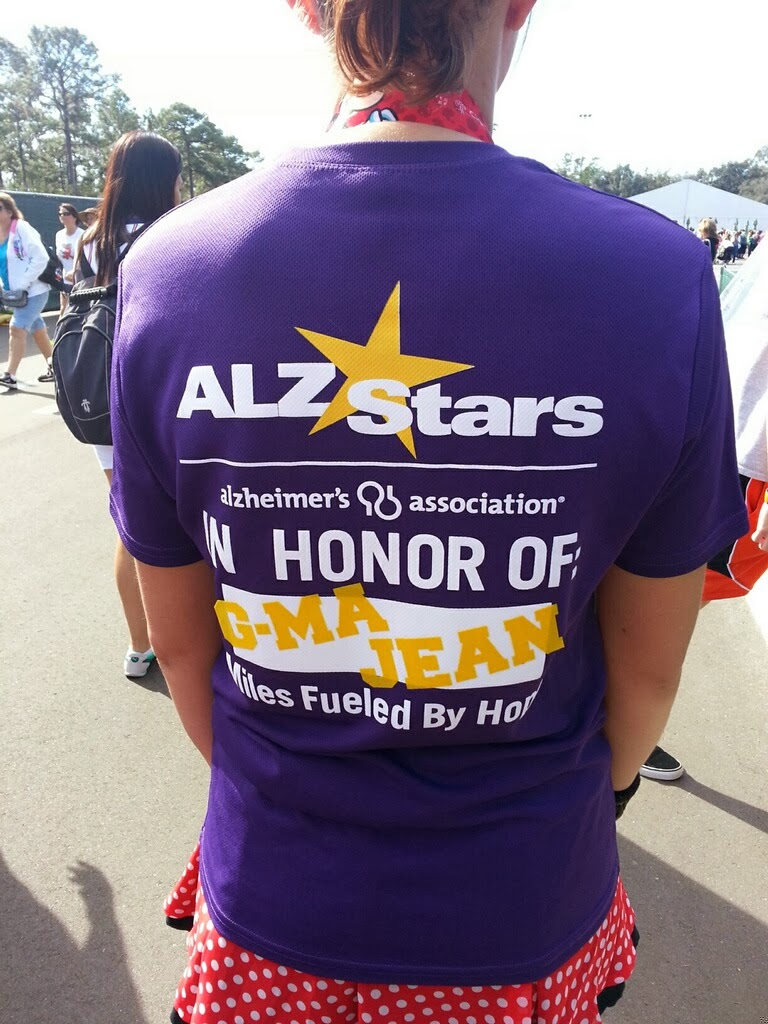 P.S. It is not too late to make a donation for the cause: http://act.alz.org/goto/kateavery


We arrived in Florida late Friday night. My parents and brother came for the first 4 days of our trip, so we rode with them to the hotel, checked-in, and headed to bed. On Saturday, they went into the Disney Parks, while Scott and I took it easy. We slept in a little, then went for a short 2 mile run. I wanted to get a feel for running in the humidity, as well as try out my race outfit one more time and make sure everything felt okay.

After our run we headed to the race Expo and packet pick-up at the Disney ESPN Wide World of Sports complex. This was by-far the largest expo I had ever been to. It was so hard not to buy everything. I did buy a few small things and a ridiculously priced jacket (I had to splurge on something!).

After the expo we went to Walmart and picked up some snacks and breakfast for the rest of the week, and then grabbed dinner on the way back to the hotel. The rest of the afternoon was just spent relaxing until trying to get some sleep around 7:30pm (we had to wake up at 2:00am to catch the bus a little after 3:00am).

Pretty soon it was race morning! Surprisingly, I managed to get a decent amount of sleep, so woke up feeling pretty good! I had already laid out all of my race day gear, so getting ready was a breeze, and before I knew it we were on the bus heading to Epcot!


We had a couple hours to wait before the race started, but it actually didn't seem to take all that long. Before I knew it, the gun and fireworks went off for the first wave of runners! What surprised me was how long they spaced out each wave, and that they set off new fireworks at the start of every wave (that was pretty cool - I didn't realize they would do that!). Finally my wave was ready to start!

I started off pretty easy. I was a little cold, so I wanted to warm-up (in all honesty though, race day weather was PERFECT. Mostly 60's, maybe 70's by the end. It did get chilly waiting around in the dark, but it was bearable). The fact that they spaced out the waves by several minutes was nice because you really could run right from the beginning. However, also because of how spaced out the waves were, I didn't cross the start line for almost 15 minutes, which made interpreting the clocks at each mile a little difficult (and I was only in wave F, there were at least 10 more waves behind me).

The first couple miles went by pretty quickly. Even though it was just roads and no parks until Magic Kingdom around Mile 4, they had tons of entertainment along the course - every 1/4 mile or so there was something. Bands, characters, etc.

As we got into Magic Kingdom, we ran through the parking lots and roads for awhile, until around mile 5 when we were finally in the main part of the park. It was still dark at this point, so hitting Main Street USA was pretty cool because it was really well lit up and there were TONS of cheering fans. It was definitely one of the best parts! After main street, we went right through Tomorrowland, and then wound back towards Cinderella's Castle and through it. Overall, I would definitely say Magic Kingdom was probably my favorite park to run through. It was the first really exciting part of the race and it was still early enough in to really enjoy it and take it all in.

After leaving Magic Kingdom, we headed south towards the Grand Floridian Hotel just past mile 7. This is where my parents were planning their first spectator stop. It worked out really well because there was just a handful of people there, so I easily found them (vs. if they had tried to watch from Magic Kingdom - would've been impossible to find them). It was a nice boost to see them, and I quickly said hello, grabbed my sunglasses from them (despite it still being somewhat dark out), and then headed on.

After the Grand Floridian, we had another mile or so, and then we ran onto the Disney Speedway which was pretty neat. They had tons of cool cars to run by (Scott could name them off...the only one I knew was Herbie!). It was finally starting to get light at this part in the day which was nice.


Miles 9-12 were okay. We were running between the Speedway and Animal Kingdom, so there wasn't a whole lot of excitement, but there were still characters and  music which was nice. Finally, we hit Animal Kingdom which marked the Half Marathon point. It felt nice to know I was over half-way there! We briefly ran through Animal Kingdom, which was fun, but not as exciting as Magic Kingdom. They had employee's cheering, but no spectators.

After Animal Kingdom, we headed east towards the ESPN Wide World of Sports Complex. This was probably my least favorite part. For a whole mile, you could see the faster runners looping back, so it was almost depressing to know they were within a few yards of me, and yet also 3-4 miles away from me. Once I got into the Sports complex it was better. We ran between football fields, baseball fields, and onto the track, before running into and around the bases of the baseball stadium. They had the TV screens up with live coverage of the runners, which was cool. Shortly after the stadium, I saw my parents again at their second spectator viewpoint. I was about 19 miles in at this point, so I dropped off my handheld water bottle to them so I didn't have to worry about it anymore.

I continued on the loop, this time in the better position - 3 miles ahead of all the people I was passing, and started to make my way back north towards Hollywood Studio's. We entered into the back part of Hollywood Studios (where they had chocolate at the mile 23 aid station!!!), and exited the front of the park. By this time, the park was open to guests, so there was more cheering and excitement than Animal Kingdom had.

As we exited Hollywood Studio's, we made our way onto the river trail that connects Hollywood Studios to the Boardwalk and eventually Epcot. We ran along the Boardwalk past the Beach Club Resort (that I stayed at once as a kid), and finally into Epcot! We entered Epcot through a back gate at the "England" portion of the World Showcase. We then ran around all of the various countries, and into Future World, where I saw my parents one more time just before the Mile 26 mark. I didn't stop to chat this time, as I was really ready to be done! I continued on towards Spaceship Earth (aka the giant Golf Ball), was a little disappointed we didn't go under it, but kept on anyways, through a back gate, and towards the finish line, where I finished in 4:26:45!

In general, I felt like this went really well for my first marathon. I felt good the entire time and never felt like I hit the "wall". I think this was because I fueled A LOT! I stopped at almost every aid station (I think all but the first and the last actually), and drank half a cup of poweraid and half a cup of water. I also started taking my Honey Stinger chews at Mile 8, and ate them fairly consistently thru the half-marathon point. Then at Miles 15 and 19, I grabbed a Clif Bar vanilla gel (which may be my new favorite gel flavor) and took the whole thing, then also had a banana somewhere in there, and the piece of chocolate at mile 23. So I fueled a lot, but I'm glad I did. I'm sure I lost a little time when I had to walk in order to drink and eat the banana, but I think it was worth it. I felt strong the entire race, and was even able to pick up my pace for the last 4 miles (my very last mile was even a sub-8 minute pace!). 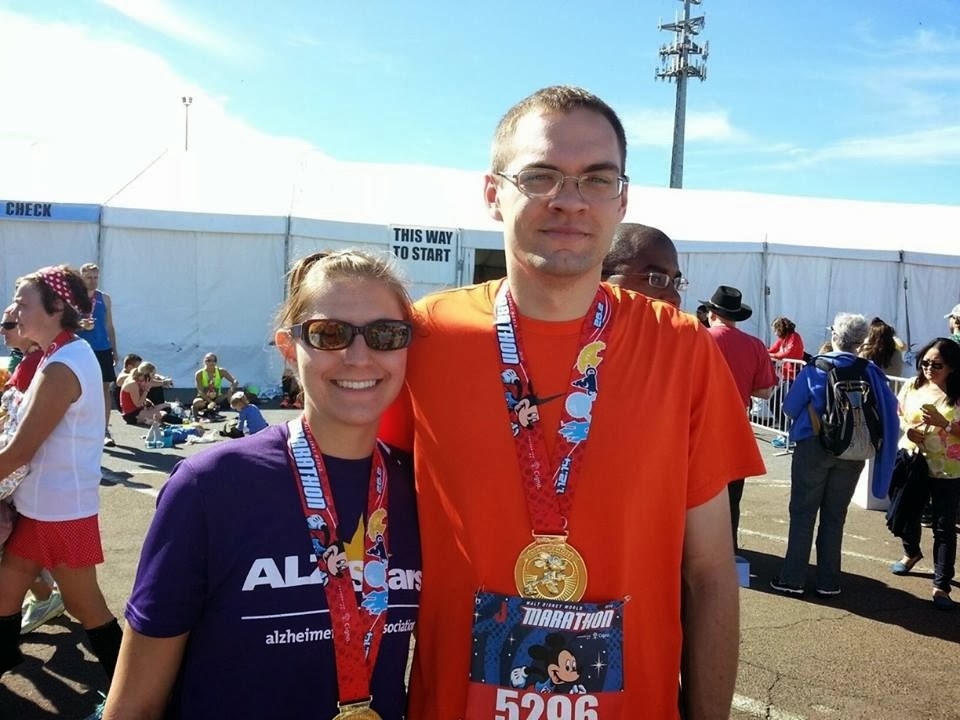 Summary of what I did and didn't like about this race:

As much fun as it was to do Disney as my first marathon, I think it might've been better as a second or third. There's so much you can do during the marathon (such as stop and take pictures with characters), but since it was my first, I wanted to see how fast I could do it in. If I ever do Disney again, I want to be able to take my time (although that is also why something like Dopey could be good - you could do the shorter races for fun and the longer races to actually "race".

Not going to lie, I was REALLY sore on Monday and Tuesday. It made walking around the parks pretty difficult. But I still had a fun time, and I'm sure the walking was probably good for my recovery anyways. I'm really glad we stayed the whole week after because I felt like I had enough time to see everything without totally killing myself. Here's some pics from the remainder of our trip: