On Saturday I ran in the Grand Mesa Bear Chase - a small, local race put on by the Grand Mesa 100 race directors, and a fundraiser for a local boy scout troop. I heard about it back when I helped pace at the Grand Mesa 100, and then decided to sign up when I saw it again advertised in the newspaper. I decided to do it as more of a fun/training event, rather than an actual "race".

The course consists of a loop a little over 4 miles in length atop the Grand Mesa at 10,800 feet. Racers had the choice of doing 4 miles (1 loop), 8 miles (2 loops), or a Half Marathon (3 loops). Since I've been running long distances all summer, I of course, signed up for the Half Marathon. It's not very often that you can find races this distance for an affordable price, so I couldn't really pass it up (it was $35.00 - typically half marathon's are at least $50, if not closer to $100).


As much as I was looking forward to it when I signed up, by the time Friday rolled around I honestly wasn't even in the mood to race. Now this is kind of weird for me because I'm so often wishing I could race more. I think I was feeling worn out from having had such a big race the weekend before. And when I say "worn out", I more mean mentally worn out as opposed to physically. I had just put so much time, thoughts, and emotions into Imogene that the thought of another race just made me tired. Even if I was just doing it for "fun." But because it wasn't until 10 am, I could at least partially sleep in, so I told myself that I still needed to go show up. Once i got started, if I really wasn't feeling it, I could always drop out or switch to a shorter distance. I might as well go, get my t-shirt and scope it out.

So, on Saturday morning I was up at 6:30, got dressed, ate breakfast, and was on my way slightly before 8:00. Only a few minutes into my hour and a half drive and it started pouring down rain. And not to mention the fact that I couldn't even see the Grand Mesa due to clouds.

"Should I turn around?" was all I could think...

I had just worked my butt off all summer for Imogene, I was not in the mood to run 13 miles in the freezing cold rain, on trails that were going to be wet and muddy...I'm supposed to be done with this...

But, I once again told myself that I needed to at least show up. I still had almost 2 hours until the race started. Who knows what the weather will be doing in 2 hours anyways!

So I continued on in the pouring rain. I stopped in Delta to get gas, and by this point, the rain had lightened up a bit. But the Grand Mesa was still covered in clouds. I headed out of Delta, turned onto highway 65 and started the ascent up the Grand Mesa. Into the clouds...

Overall the drive didn't actually end up being too bad. I could see clouds and fog, but I wasn't driving through any of it. As an added bonus, I passed three spots along the road where the trees had begun to change. This made me feel a little better about going. I've been fairly anxious to catch some fall foliage, so at least I was going to get a little of that. It was interesting though how it was just a couple areas that had changed, and then it was back to boring old green trees.

At about 9:20 am I made it to the parking area near the race start. I went and checked in, got my race bib, t-shirt, and goody bag, and then headed back to my car to warm up before the race started. By this point the rain had stopped, but it looked like it could start up again at any point. Oh and did I also mention that it was only 40 degrees out?! Yep...I think I went from summer to winter in a matter of hours.

At 9:45 I got out of my car and headed to the start. I saw Gary and Shannon, a couple I had met while doing a few training runs this summer (IPR training and the GM100 pacing). They were both doing the Half Marathon too, so that was nice to know someone. The race directors briefly described the course, and then we were off!

I started running at a nice steady pace with about 5 or so runners in front of me. In a way it was kind of nice that it was 3 laps because I was able to follow people for the first lap, and then by the second and third lap I, for the most part, knew where I was going. The first lap went pretty quickly. Around mile 3 is where it got really wet. Leading up to this point I was able to maneuver around any big puddles, but not really anymore. The entire area just got swampy. So I just had to go through it. I was submerged to about half way up my calves. It's always hard the first time, but after that it gets easier (although this was the first time I had ever run through water when it was also cold out). By the time I got through all the muddy and wet areas I was almost done with my first lap. I ran back to the starting point, checked in, had some water, and then headed back out for my second lap.

The second lap went the opposite direction (clockwise instead of counterclockwise). On one hand, this was nice because my feet were still wet, so I might as well just get them wet again before they dry. On the other hand, the clockwise direction was a little harder to follow. You wouldn't think it would be difficult to remember since I had just done it from the opposite direction...and yet somehow it was. Around mile 2 I missed a turn. Luckily there is an aid station nearby and they saw me miss it and shouted over at me. I probably should have just backtracked, but instead I decided to cut across a field. This wasn't the greatest idea. The so called "field" was basically another swamp. I was almost knee deep in muddy grass water. Oh well, it was an adventure for sure! Once I got back on track, I was good to go for the remainder of the loop. The rain was still holding out for me, but It had gotten pretty foggy by this point. I actually kind of enjoyed the fog though. I had never ran in fog before. It was very ominous and yet peaceful at the time same time.

I finished my second lap and headed back to the starting line again to check in for the final time, get some more water and a snack, and then I was off for my last lap. This one was counterclockwise again, which I felt more comfortable with, so I was ready to rock this last lap! And then it started raining... I know I'm probably being a wimp, but I'm just not a big fan of running in the rain. Maybe it's the flashbacks to my rainy, freezing night pacing at the Grand Mesa 100, but I just don't enjoy it. Plus there's the fact that I wear glasses and when it rains I can't see anything. So anyways, the rain was a bit of a set back. But I continued on through it. I did my best to keep running. I did walk a couple times, but I would always get myself going again. By this point I was pretty sure I was the first place women for the half marathon (it wasn't a very big race), so I tried to push myself, so that I didn't let anyone pass me. I didn't see anyone close behind me, but I didn't want to lose out on a place just because I was being a slow poke. Because honestly I was feeling pretty good. Other than the rain. So I kept pushing through, kept running. Eventually I got to the swampy area. This meant I didn't have much further to go. I ran right through it. Cold, muddy, wet. And then I kept going. And finally I was just about there! I sped up and crossed the finish line in 2:29 (according to my Garmin; 2:26 according to them).

Turns out I was third place overall, which meant I got a prize! A cute little bear with a tag stating my place! I was technically also the first place women, but since it was a small race they weren't doing gender ranking. Even though I almost didn't go, I'm really glad I did. Small races like this are not only fun, but they're also a good ego booster! I know running and racing for me isn't about winning, but it's still nice to be able to win something every once in awhile. And even if I hadn't won, I still had a good time, and I am glad I didn't bail out on it. Running in fog was a new experience for me and I really liked it. I could have done without the rain, but at least it didn't show up until the final lap! Other than the mud and water, I actually really liked the course. It was definitely a "trail run", but it was still very run-able. I ran almost the entire thing, which felt good. Because of all the rain that the mesa has been getting, the ground was also nice and soft so I had a lot of fun going fast on the downhill sections.

A few pictures from the race:

On my way home I had to make a couple stops to get a few pictures of the pretty fall leaves. The fog was still looming and it made for some neat photos: 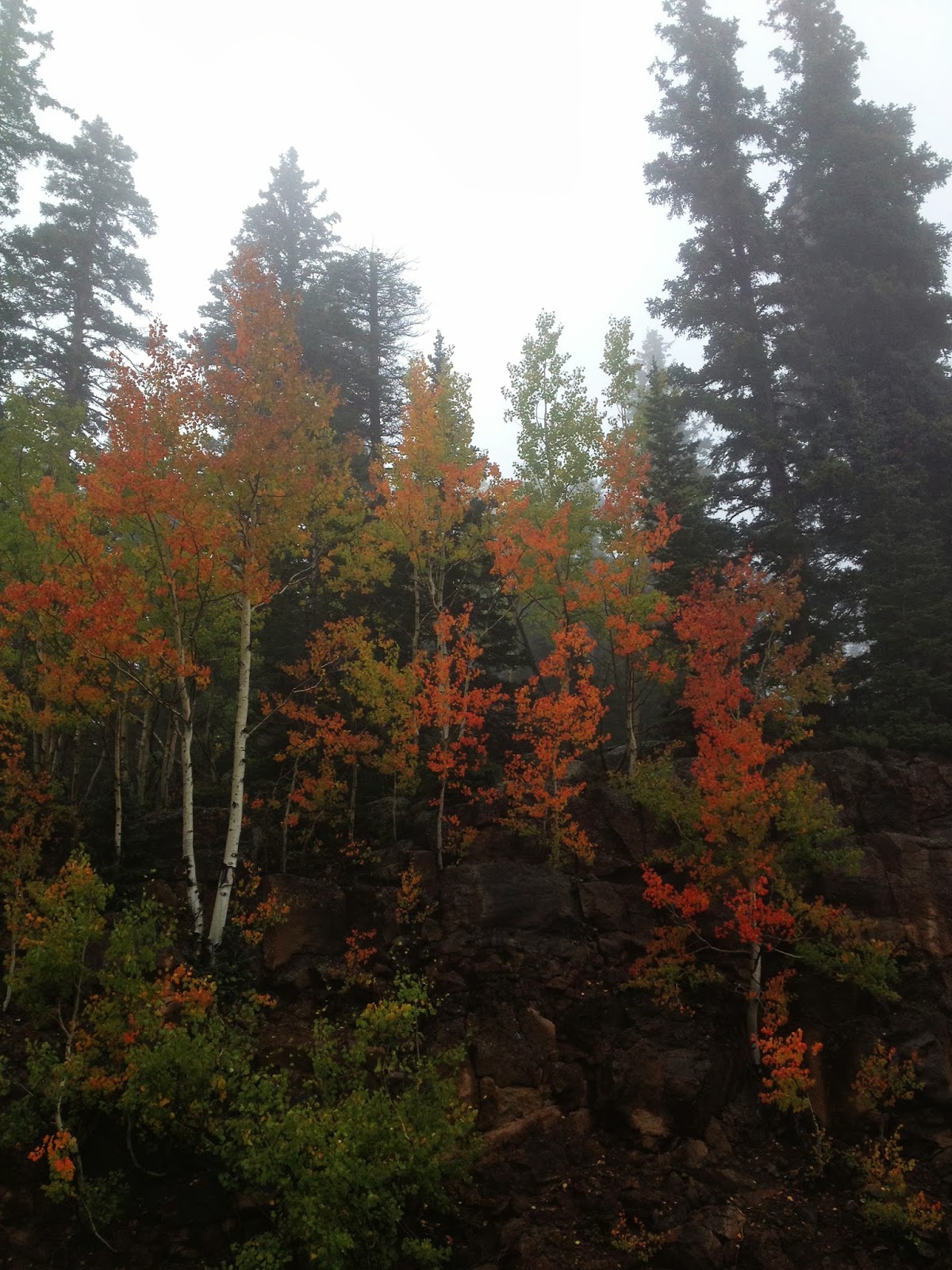