You Should Have Seen That Sunrise!

My theme for today's Blog (inspired by my sunrise hike this morning to Baldy Peak) would be John Mayer's song "3x5" (from his first and best album - Room for Squares). He sings about seeing a sunrise, and about how he wants to see the world through his eyes, rather than through a camera. Now, don't get me wrong, I love taking pictures. I get a little obsessed actually (ask anyone I've traveled with - I literally take hundreds, if not thousands of pictures on any given trip. I'm just always afraid I'm going to miss something. However, on this particular hike, I kept thinking about this song and how I really do need to be better about actually experiencing what I see, instead of just taking pictures and looking back on them.

So, here are the stats -

If you read my last post, you probably saw that one of my "summer bucket list" items was to hike to the top of a mountain and watch the sunrise. Well that is what we attempted to do today.

We woke up at 1:00am (probably when most people are just getting to bed on a Friday night/Saturday morning), and left the house at 2:00am. We would've been at the trailhead around 3:00, but took a wrong turn and had to back track a bit. So we ended up starting close to 3:45am. It was pitch black out, and completely clear skies, which made for some quick stargazing. Nothing extensive, as we were already behind on time, and wanted to make sure we still had enough time to see the sunrise.

So, as I just said, we started about 3:45am - it was very dark, and we saw multiple signs warning that this was "bear country," so needless to say I was a little freaked out for the first hour or so. We moved fairly quickly (mostly because I was scared), and honestly I don't remember a whole lot from the beginning as it was all dark. About an hour or so in, we could start to make out some of the surrounding mountains which was helpful, and about a half hour or so later could start to see a little yellowish glow coming from the east (below). We took a little break then, and tried to decide if we wanted to stay here for the sunrise, or to continue on and try to get to a higher point. I was nervous we would miss it, but we decided to keep going, as the spot we were at just wasn't quite right.

About a half hour later, we came upon a great spot to stop and watch the sunrise. I was a little bummed that we were still over 1/2 mile away from the top of the peak, but I knew that if we kept going we would've definitely missed it. So we found a great spot on the top of a  nearby hill and rested awhile while we waited for the sun to rise. We only had to wait about 10 minutes or so for it, and there it was: 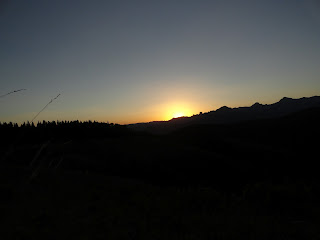 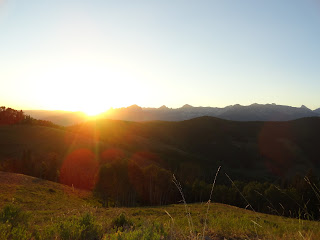 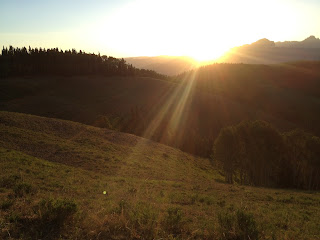 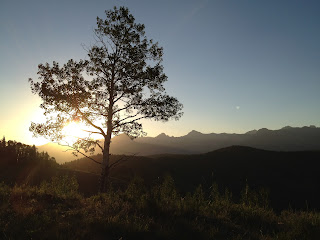 It was while watching this that John Mayer's song came to mind, and so I tried to take some time to just watch it without the camera. It was still difficult, and as you can tell - I still took several pictures. Of course I'm never going to completely follow the song and not even bring a camera (I don't think I would know what to do with myself). The point I'm trying to make is just that I want to try to be better about really enjoying something while it's happening.

After we enjoyed the sunrise, we decided to continue on and make it to Baldy Peak. It was just over 0.6 miles later that we made it to the top, and while the view from the top was pretty, I'm not even sure we would've been able to see the entire sunrise. The name "Baldy Peak" was a little misleading, as the northeast side was covered in pine trees. So overall I'm glad we decided to stop where we did, and eventhough we didn't watch from a "peak," I think the bucket list can still get checked off. 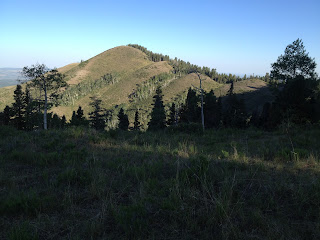 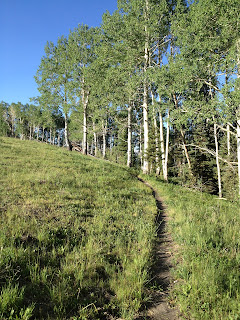 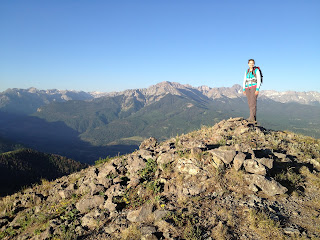